Apple AirPods now available to buy for $159, delivers as soon as Monday 19 [update]

Update: As expected, AirPods stock is limited. An hour later, the product is no longer available for Christmas delivery. In the US, delivery estimates are now quoting December 29th availability. eBay is already flooded with scalpers selling AirPods at inflated prices.

The AirPods are now available to buy from Apple’s Online Store, with delivery before Christmas. You can buy AirPods from Apple and Best Buy (delivery in 2017).

After many delays, Apple’s truly-wireless headphones are finally on sale which are the company’s preferred solution to the wireless audio future heralded by the iPhone 7. Quantities are likely to be limited so get in quick if you want to secure a pair before Christmas Day.

AirPods will be available at Apple retail stores next week. Online, delivery estimates indicate customers will receive their units as soon as December 21 in the US, with some international customers getting even earlier estimates, as soon as Monday 19 …

Apple AirPods are ‘truly-wireless’ headphones, meaning there are no connecting wires at all. Each earbud has its own battery and antenna and they communicate independently. At a glance, they look like standard EarPods — the headphones that come bundled with every iPhone — with all the wires cut off.

Each earbud has its own battery, lasting up to five hours of playtime. The AirPods charge in a (included) carrying case, for a total battery life of 24 hours usage.

The AirPods know when they are placed into or taken out of an ear due to the inclusion of proximity sensors, allowing the music to be paused automatically when they are removed. The earbuds have no physical buttons but users can double tap the stalks to activate Siri, using the integrated mic.

AirPods feature Apple’s W1 technology. This allows for seamless pairing to iPhone, Apple Watch and iPad devices. The pairing configuration is automatically synced over iCloud so Apple devices will be able to detect the AirPods. The AirPods will communicate over standard Bluetooth protocols for any other accessories, including Apple TV.

To pair with a nearby iPhone, users simply open the carrying case and a pairing view automatically appears on the iPhone screen.

Apple AirPods are the third product to feature the W1 wireless tech. Beats has already released the Beats Powerbeats 3 and Beats Solo 3 headphones which also feature the W1 chip for longer battery life and streamlined pairing. The Beatsx are expected to launch in February, and will be the fourth W1 product.

AirPods are Apple’s ideal solution to the wireless future heralded by iPhone 7, which does not include an analog 3.5mm headphone jack. They were originally announced at the September event alongside the iPhone 7 with availability announced for October. However, Apple had to delay the launch due to unforeseen last minute bugs. It is still unknown exactly why the product had to be delayed for more than two months.

AirPods cost $159 in the United States. AirPods are available in more than 100 countries including Australia, Canada, China, Hong Kong, France, Germany, India, Mexico, Netherlands, Japan, UAE, the UK and the US. If you want a pair before the end of the year, order as soon as possible as stock availability is likely to be constrained. Let us know if you ordered in the comments! 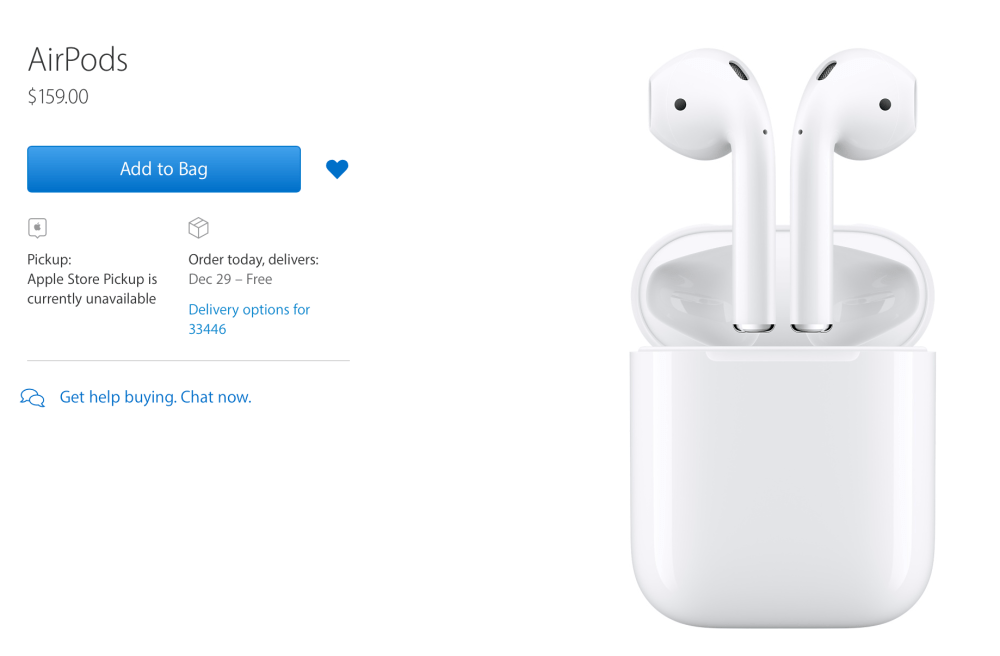 So I got AirPods coming Monday 19th! AYYYYY https://t.co/URwrijkw3B pic.twitter.com/20IJBLTN0g