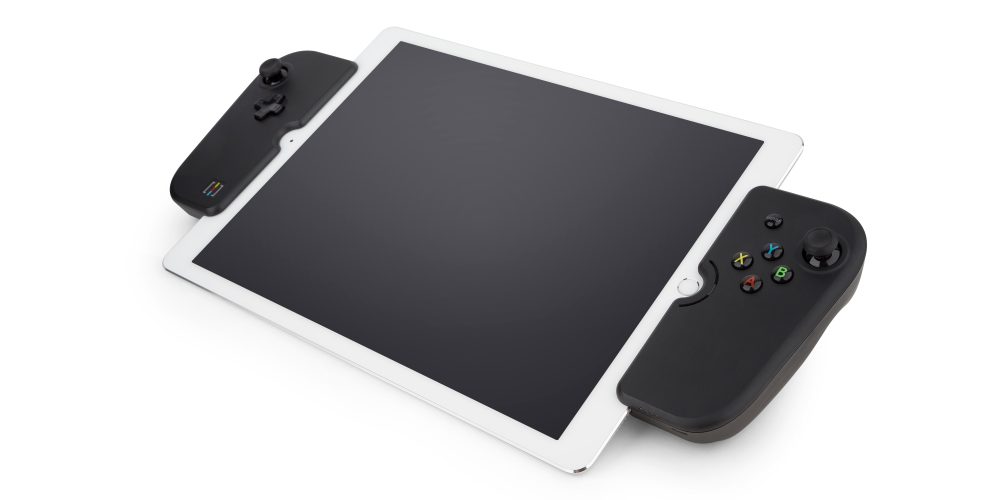 Since iOS 7, Apple has allowed third-party manufacturers to make game controller accessories for iPhones and iPads so users can play iOS games by mashing physical buttons and waggling real joysticks, rather than rely on the touchscreen for input. The Gamevice (~$99, price varies) is one such MFi accessory in an interesting form factor, almost like a GameBoy with buttons on either side of the screen.

Apple is featuring the Gamevice in Apple Stores now, and the iPad Pro models are recommended on the company’s gift guide. Read on for our hands-on review …

The Gamevice is a holster that the iOS device snaps into, covering the left and right sides of the iPhone or iPad chassis. One half includes a female Lightning port which acts as an anchor to secure the accessory in position as well as communicate the button presses to the software. It’s an MFi accessory so it’s all official, above board and theoretically just works (see below).

The left hand side of the gamepad features an analog stick and a D-Pad, which is a little mushy for my taste but perfectly fine to use in gameplay. On the right side, there’s another analog joystick, a menu button, and four control buttons labelled ABXY. These buttons feel great to press with just the right amount of clickiness to mash away comfortably.

On the top side, both parts have a left/right shoulder button and trigger where your index finger and middle finger naturally rest. My continuing disappointment with MFi game controllers is the lack of a click-button for the analog sticks but this is an issue inherent to all MFi controllers as Apple did not include clickable sticks in the licensable spec.

Despite appearances, the interconnecting rubber band is not stretchy. The band is precisely sized to make the two gamepads snugly snap into place around the iPhone or iPad (it flexes to aid insertion and removal, though). This means that you need to buy a Gamevice to fit the particular device you want to play games on; the company offers versions for iPhone 6, iPhone 6s, iPad mini, 12.9-inch iPad Pro and more variants.

It is nice to have something that is sized to fit to exactly what you are using, but there are a couple of tradeoffs with this type of MFi game controller. For one, if you upgrade your iOS device at a later date to new hardware with a different form factor, perhaps buying the new bezel-less 10.5 inch iPad expected in early spring, then the Gamevice you buy today is likely not going to be compatible.

In contrast, the other front-running MFi controller, the SteelSeries Nimbus, which is a dedicated Xbox-esque controller that communicates using Bluetooth. Therefore, the Nimbus is independent of any particular hardware chassis and transcends devices. It also works with Apple TV — a feature the Lightning Gamevice cannot do at all.

This sounds negative but it is the reality of buying something designed for a particular device versus a one-size-fits-all accessory that is more universal. With that in mind, I really love the Gamevice as it is. 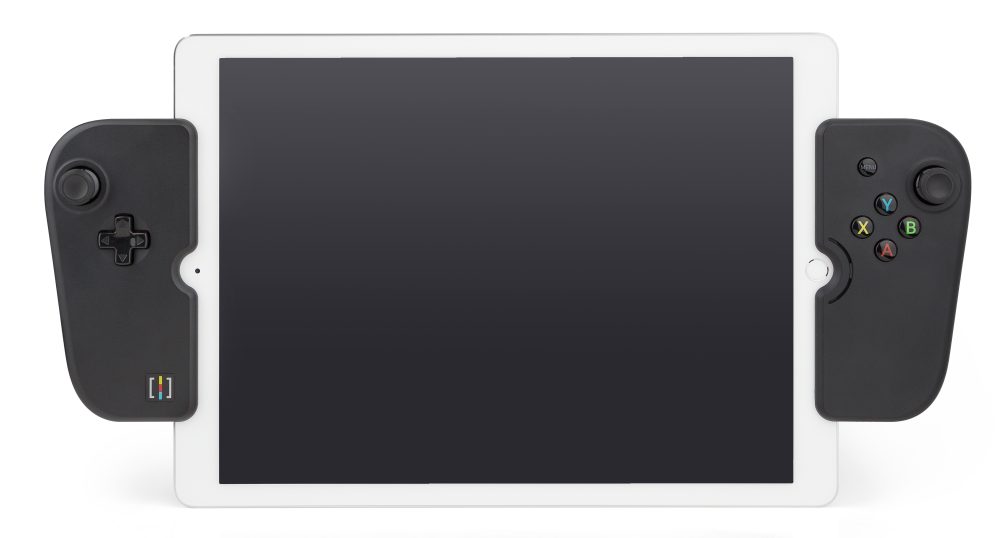 I do most of my iOS gaming on the 12.9-inch iPad Pro so I have been testing the largest Gamevice that they sell. When I’m using it, it feels so similar to a GameBoy Advance handheld console — but way bigger because of the immersive high-resolution iPad display. When it use, it feels like one single product, rather than an iPad with some bits stuck on the side — an advantage of being custom made for this particular device.

I like being able to hold the gamepad and tablet as one thing compared to the Nimbus controller. It’s better for travel too — on a cramped bus seat or train journey, for instance. With the iPad physically attached, you don’t have to worry about propping up the iPad or anything. If there is some glare from the sun or a skylight, I can just tilt my hands to change the angle whilst in the middle of playing. Ergonomics are good: it’s not heavy to use for extended periods; it felt weighty for the first hour, but I quickly adjusted.

Another benefit of being a Lightning wired accessory is there’s no mental hurdle about battery life or charge times or needing to carry yet another adaptor cable. The Gamevice powers itself from the iOS device with the Lightning port so if the iPad has enough battery to play a game, you can always know that the Gamevice is ready to go.

The makers also claim that MFi Lightning controllers are superior to Bluetooth ones for twitch reaction games as there will be less latency between pressing a button and the action being registered in the onscreen game. Frankly, I couldn’t notice a meaningful difference here. The Gamevice is probably marginally more responsive but I don’t feel like input lag holds me back playing iOS games; iPhone and iPad games do not rely on millisecond-precise movements as much as sophisticated console games do. 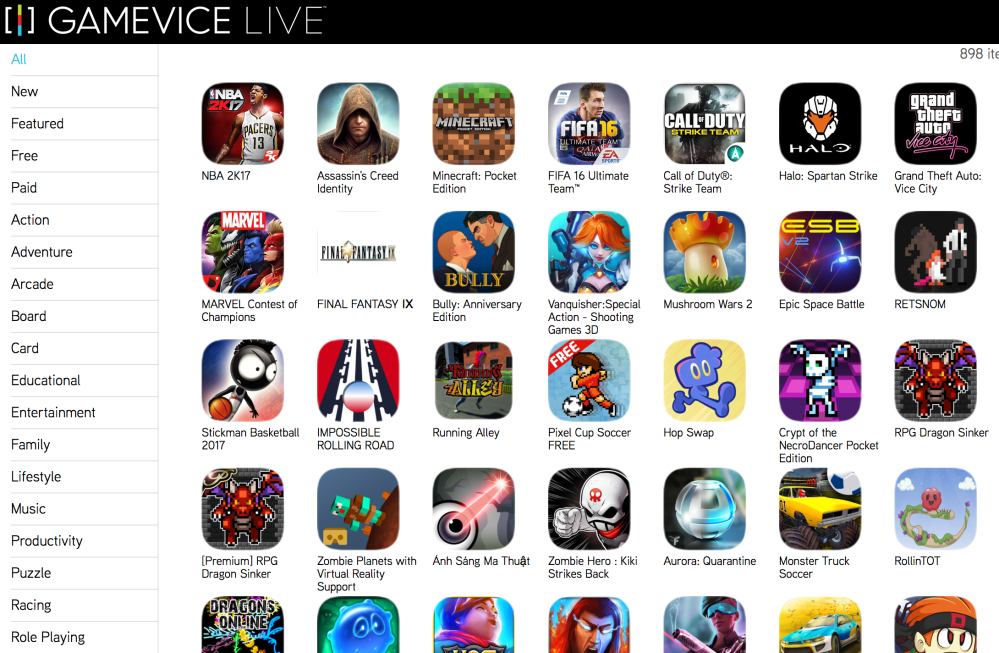 Speaking of software side, the Gamevice is pretty much plug and play. You pop it in, iOS automatically recognizes it as an MFi controller, and then you can jump into compatible games and ditch the touchscreen for the physical controls. It’s sometime easy to forget the simplicity iOS’ closed ecosystem provides; no drivers to install or helper software to configure. 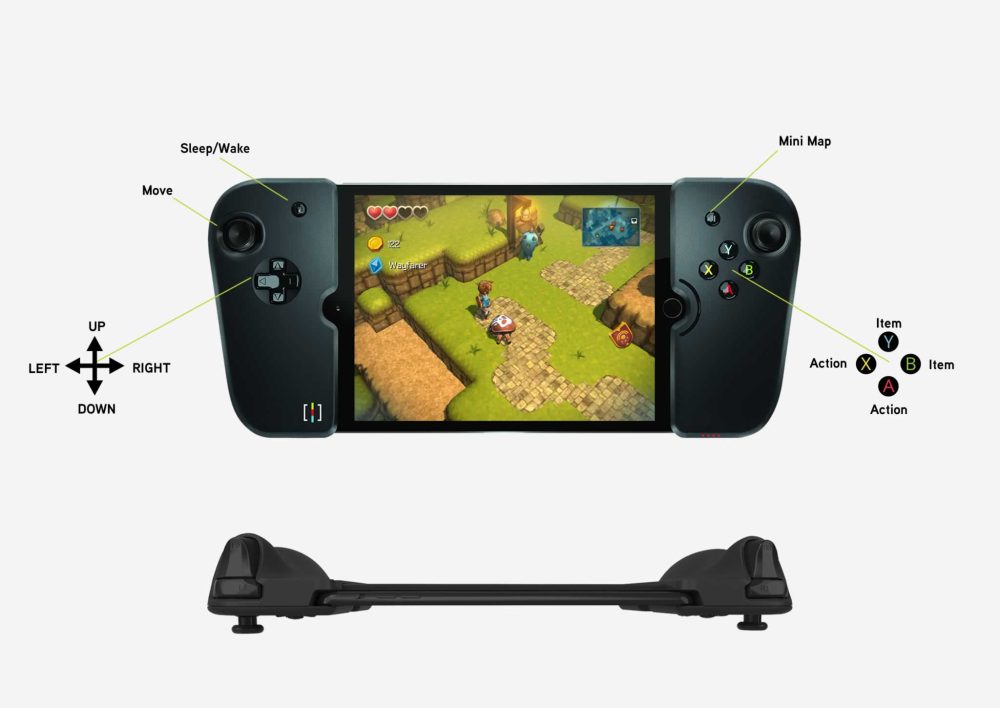 The big asterisk when considering any MFi controller is that the accessories will only work with games that support the hardware GameController APIs, first introduced in iOS 7. Integration of MFi Game Controllers is quite common in newer games (especially those featured by Apple or made by well-known publishers) but it is by no means a sure thing that your favorite game supports it. An additional constraint of the Gamevice is that the device can only be oriented in landscape, so the game needs to work in that orientation. This latter point is rarely a roadblock in practice.

Plugging in the Gamevice prompts the user to download an accompanying app from the makers called ‘Gamevice Live’. This is a curated directory of the top MFi titles; it includes descriptions, screenshots and a link to the App Store to get them. The detail screen for select popular games also includes an instruction sheet to learn the controls before downloading. These little control scheme ‘cheatsheets’ are a really handy nugget that I wasn’t expecting to be a part of the package. It was nice to see the company go to the extra effort, rather than merely scrape App Store metadata. 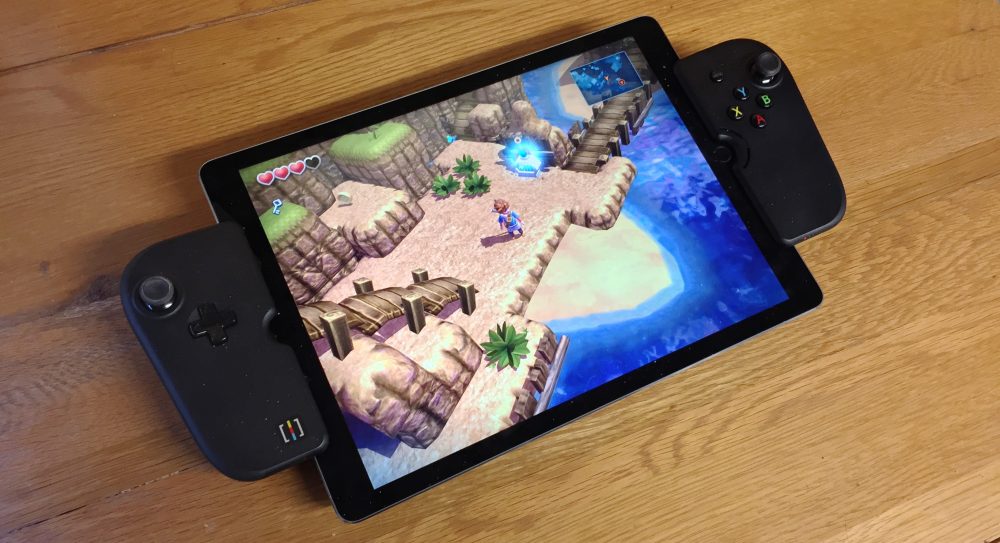 If you have just bought this and are looking for a great new game to play, I recommend Oceanhorn; an expansive action-adventure Zelda-like game for iOS. It is playable with the default touchscreen interactions but a 360° joystick makes it so much more fun and engaging. The game controller makes your character movement more responsive and accurate and your hands no longer need to touch the glass, so the screen isn’t obscured and you can be immersed in the rich iPad visuals and graphics. Oceanhorn is also 50% off right now, for a limited time, it is on sale for $4.99.

Other top titles with MFi gamepad support include the Grand Theft Auto ports, the latest Final Fantasy and frantic third-person shooter Minigore. By and large, the software side of this is flawless. Games automatically recognize that the Gamevice MFi controller is connected, seamlessly accept the inputs and adjust onscreen tutorials and hints to provide relevant instructions about which buttons to press.

There is one frustrating bug with the Gamevice system — but it has nothing to do with in-game experience. When the iPad is dormant and locked in the controller casing, a weird dialog message pops up on the screen. It says that the Gamevice wants to communicate with the Gamevice Live app: 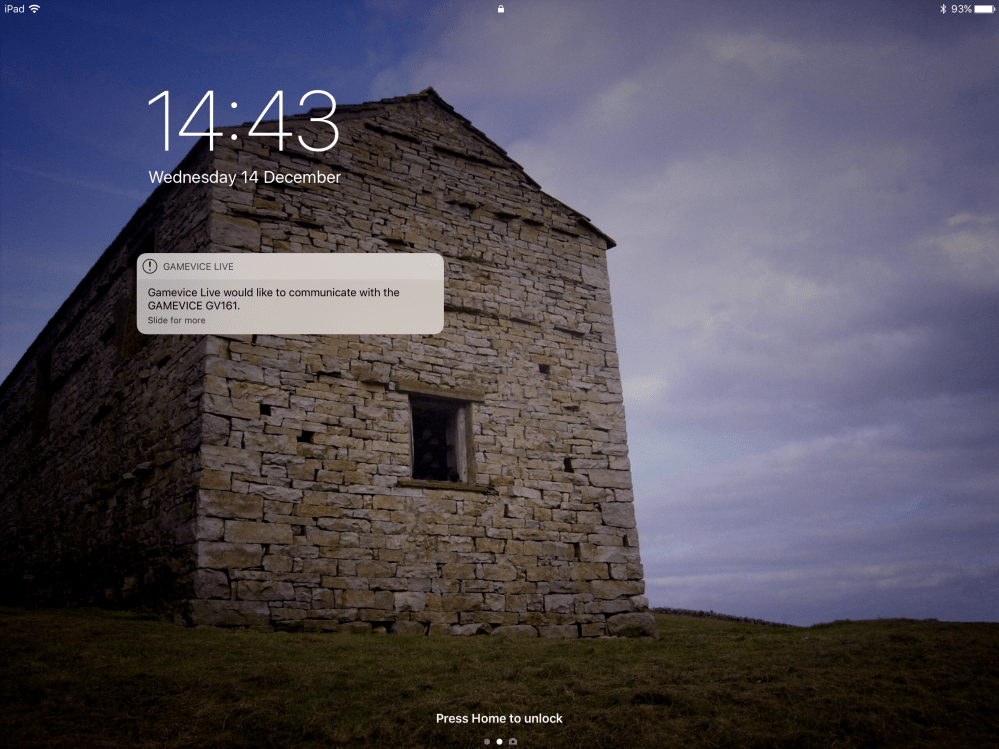 If you accept and allow the permission, the alert dismisses but will reappear minutes later when the iPad is supposed to be sleeping and not in use. The issue only occurs when the iPad is locked, so it doesn’t get in the way of gameplay but it is annoying to have the screen flash up periodically. The alerts will stop if you unplug the accessory but none of the troubleshooting routines I tried would make it stop showing whilst it was connected. I hope a firmware update can fix this snag.

Other than that, I have no complaints. As long as you play iOS games regularly, a MFi controller is a fantastic purchase (and a great gift idea for the holidays). You may want to consider the aforementioned Nimbus controller if you care about using it with multiple devices, but if you want just the best thing for your one device, the Gamevice is a clear winner.

Personally, I would recommend the Gamevice controller for iPad more than the version for iPhone. Not only is the larger screen more suited for a dedicated gaming session, but you tend to upgrade an iPad far less frequently than you do an iPhone. As mentioned before, the Gamevice has to specifically fit the device you own. You can conceivably own the same iPad for three years or more, which makes the investment of an accessory that only works with that specific model make more sense.

If you keep your iPad at home, in the living room, the Gamevice can be quickly slipped on and off when you want to relax with a shooter or adventure game. For long trips, a Gamevice-equipped iPhone or iPad is a perfect companion. On a bumpy train ride or plane ride, the handheld console form factor is superior to a separate stand when space is constrained.

At all times, the iOS device and controller will be safely gripped between your hands impervious to turbulence or bumpy tracks. Plus, you can charge both the controller and the iOS device whilst you play, using the Lightning connector on the right gamepad.

The Gamevice is available for about $99, regardless of which size you buy. I personally tested the model for the 12.9-inch iPad Pro for this review. Find out more details about the Gamevice MFi Game Controller on the manufacturer’s website.