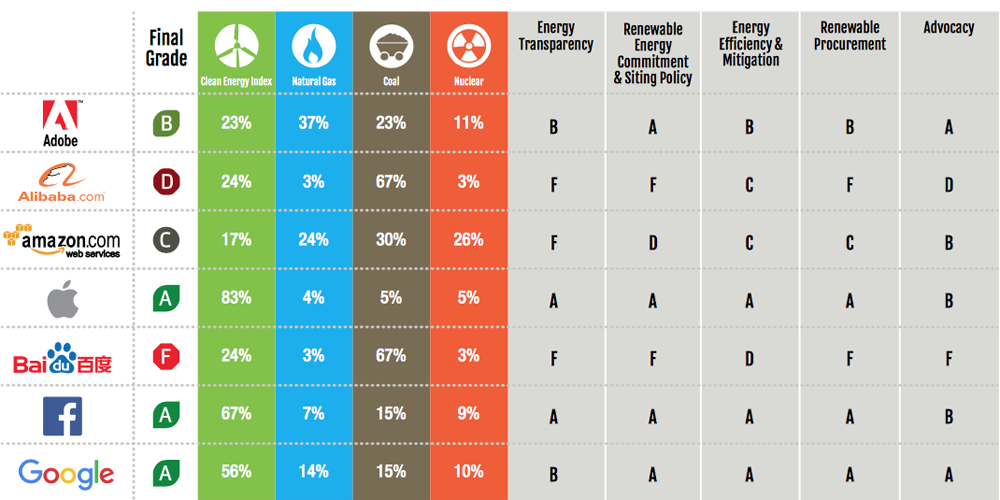 Greenpeace has described Apple as the most environmentally friendly tech company in the world for the third year running, thanks to its high use of renewable energy and the leadership role it takes in encouraging its supply chain to follow its own example.

Apple retains its leadership spot for the third year in a row among platform operators. Both Apple and Google continue to lead the sector in matching their growth with an equivalent or larger supply of renewable energy, and both companies continue to use their influence to push governments as well as their utility and IT sector vendors to increase access to renewable energy for their operations.

Apple scored 83% in Greenpeace’s clean energy index, and was awarded grade A in four out of five additional categories …

Apple scored A in energy transparency, renewable energy commitment, energy efficiency and renewable procurement. Surprisingly, for a company which is noted for speaking out on environmental issues, Greenpeace only awarded the company a B grade for advocacy.

The Clicking Clean report specifically cited Apple and Facebook as leading the way in openness in respect of their data center operations despite competitive concerns.

Data center operators like Facebook and Apple have been leading the sector in operational transparency, providing regular and easy-to-access reporting of their data center energy footprint, including facility level detail on both consumption and changes to electricity supply. Cloud computing companies have lagged behind platform specific leaders like Apple and Facebook in their energy transparency, frequently citing competitiveness concerns in revealing details on the scale of their operations.

Apple was also praised for its influence on suppliers.

[The company] played a catalytic role within its IT supply chain, pushing other IT data center and cloud operators who help deliver pieces of Apple’s corner of the internet to follow their lead in powering their operations with renewable energy.

Other companies given an overall A grade were Facebook, Google and Nevada-based data center company Switch.

In September, Apple joined a global pledge to power 100% of its global operations with 100% renewable energy, a month after it announced that all 14 final assembly plants in China were now zero-waste.