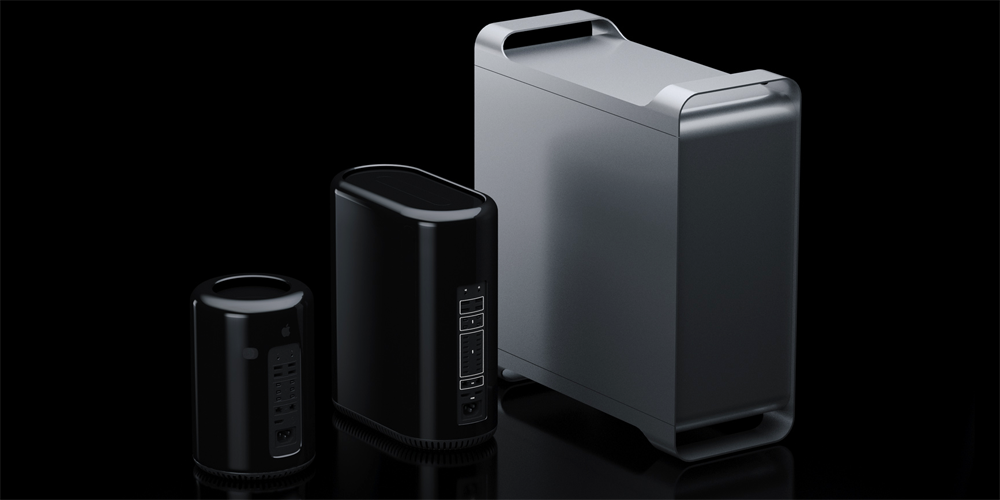 A German visual designer has come up with a concept for a next-generation Mac Pro that sees the trashcan design extended into a larger oval shape, sitting somewhere between the original and new Mac Pro in size.

Those arguing that Apple needs to offer both older and newer ports would have no complaints at this machine, which combines four USB 3 ports and the same number of Thunderbolt 2 ones with no fewer than 16 USB-C/Thunderbolt 3 ports …

The machine would also be upgradable, having two GPU cards that could be swapped out for new ones at a later date.

As with many such concept images, the specs are created simply by chucking some text over an image without thinking through the practicalities. The machine as described would not, for example, have the bandwidth needed to drive 16 Thunderbolt 3 ports, though it could be argued that there is a convenience factor in being able to leave devices plugged in while using fewer of them at any one time.

As a Reddit thread observes, there’s also the small matter of cooling for the full-length GPU cards – even if there were any hope of Apple returning to interchangeable components – and the lack of any explanation for including Thunderbolt 2 alongside the backward-compatible Thunderbolt 3.

The spec includes the suggestion of two high-speed SSDs with up to 4TB of storage with four slower SSDs offering a further 16TB of archive storage.

Still, it’s a pretty design and I guess a man can dream …

As for the real thing, there’s still no certainty that Apple will offer a new model, despite Tim Cook’s reassurance that there are still some great desktops in Apple’s roadmap.

If you have your own ideas for a more realistic Mac Pro 2, though, do share them in the comments.