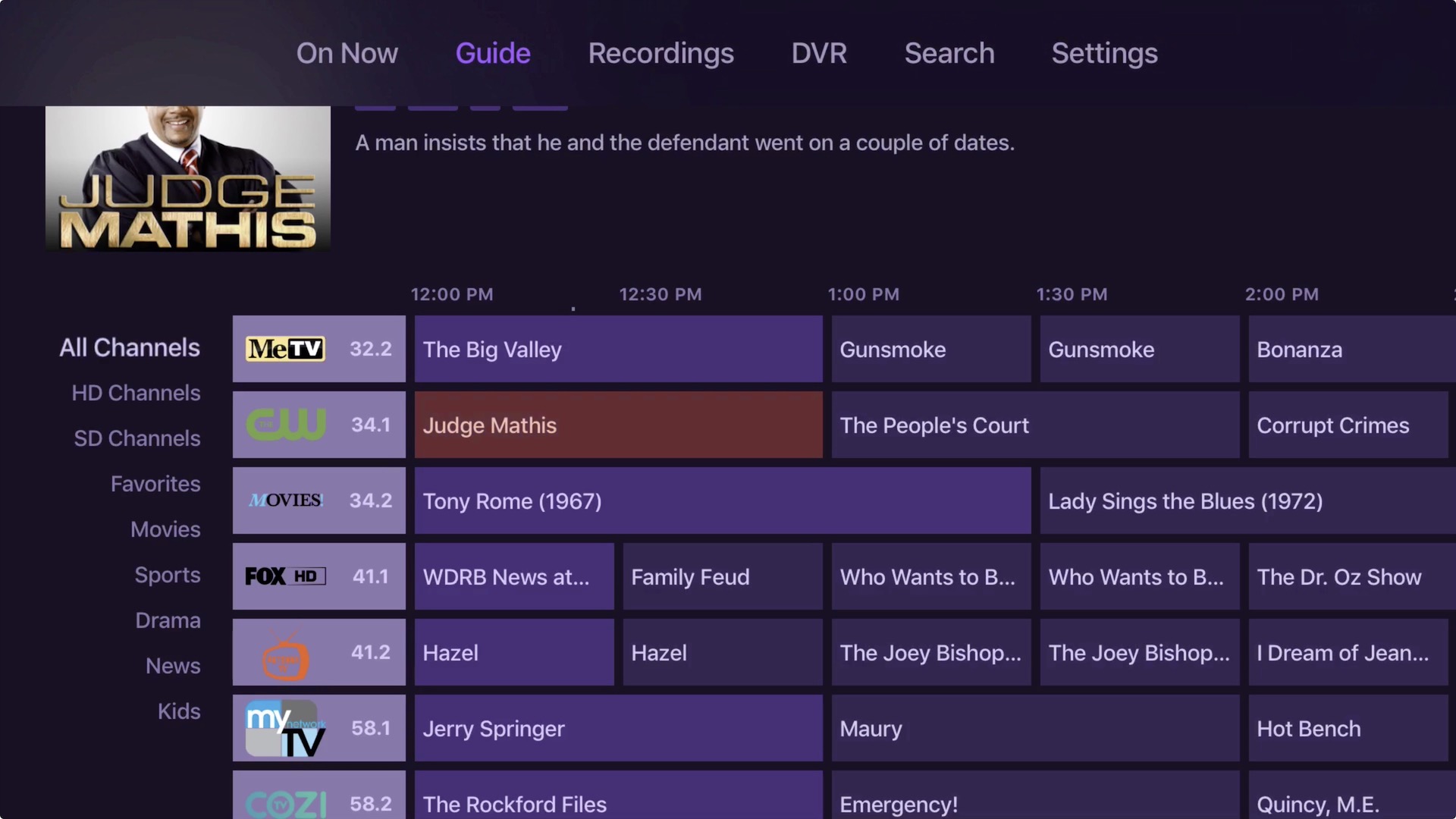 Channels, an app that we’ve covered several times in the past, allows users to stream live local television to an Apple TV or iOS device via a handy guide interface. The app works in harmony with an HD HomeRun box to receive over-the-air terrestrial television or cable TV depending on the box you purchase.

After the successful launch of the iOS version of the app and Channels 2.0 for the Apple TV, developer Fancy Bits’ next project involves integrating a subscription-based DVR service directly into the Channels app for Apple TV.

The DVR service, which will require a subscription, is currently in beta. By tapping into a NAS solution like the Synology DS916+, users can record live television, and schedule recordings directly from the Channels tvOS interface. Have a look at our video walkthrough as we take the service for a test drive.

Keep in mind that the Channels DVR feature is still in beta, and is actively being developed. The beta is open to the public, so if you’re a Channels user who would like to try it out, you can subscribe now for an $8 monthly fee. The DVR service only works with the Apple TV version of the app right now, but iOS support is in the works.

Signing up for the beta provides you with a login used to sign in to the server by way of a NAS, Mac, or PC. Although it’s entirely possible to run the service from your Mac, it’ll need to be always on for service availability. Since I only have a MacBook Pro, using my Synology NAS was a no-brainer.

Fancy Bits provides users with a package designed specifically for Synology DSM, which allows you to get up and running quickly. Similar packages are provided for other NAS boxes as well. After downloading the package, installing it, and providing a few initial configuration details, the Channels DVR service was up and running. 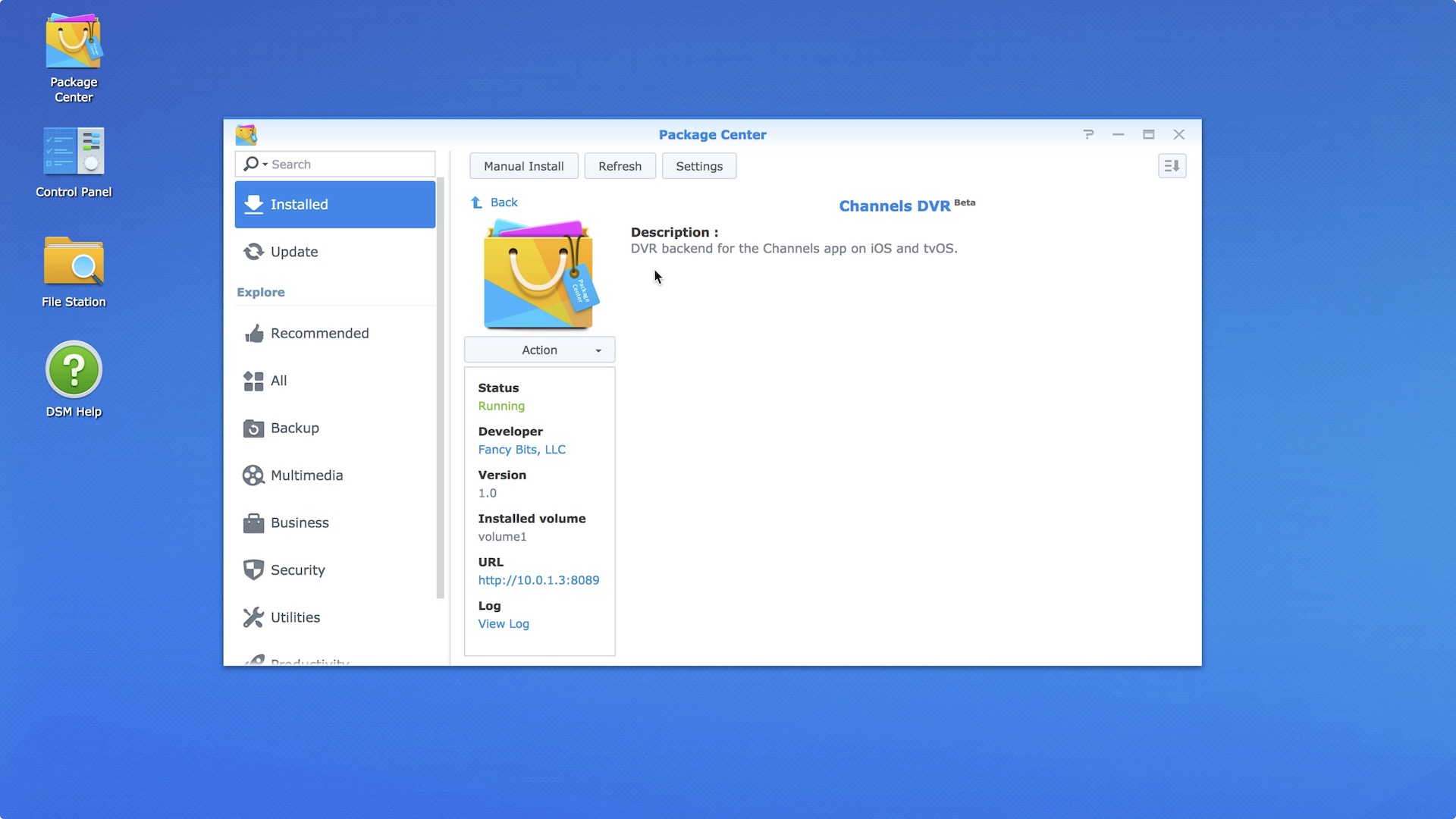 Installing the Channels DVR app via Synology DSM is a breeze

The Channels app for Apple TV is smart enough to automatically see the DVR service on the network once it has been configured. The DVR options and menus will automatically appear, and if they don’t, simply close the app and restart the app. 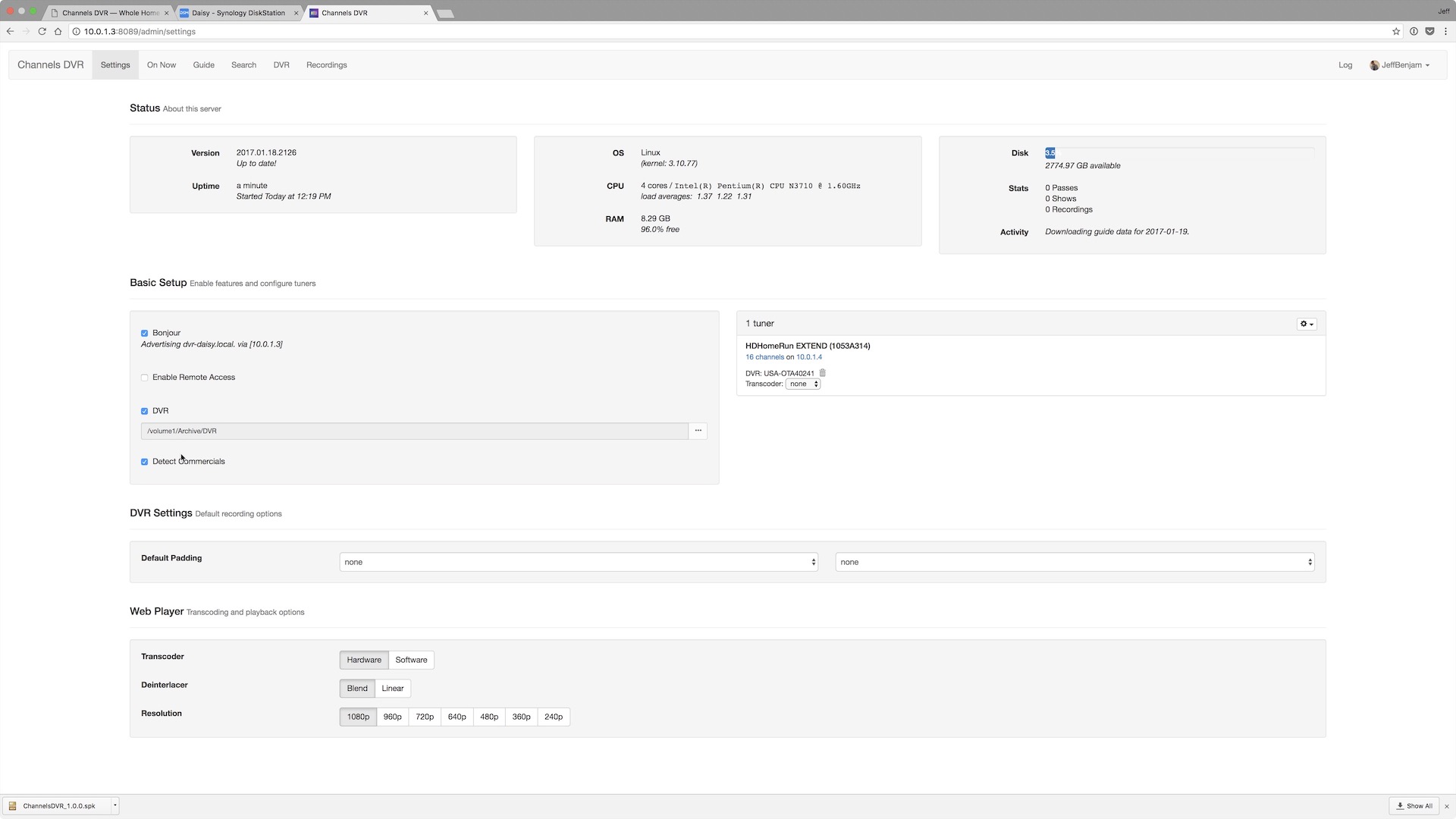 Typical DVR features are available for all of the channels picked up by the HDHomeRun box. You’re able to record shows, setup passes to record multiple episodes of the same show, etc. There’s even a provision to automatically detect commercials. 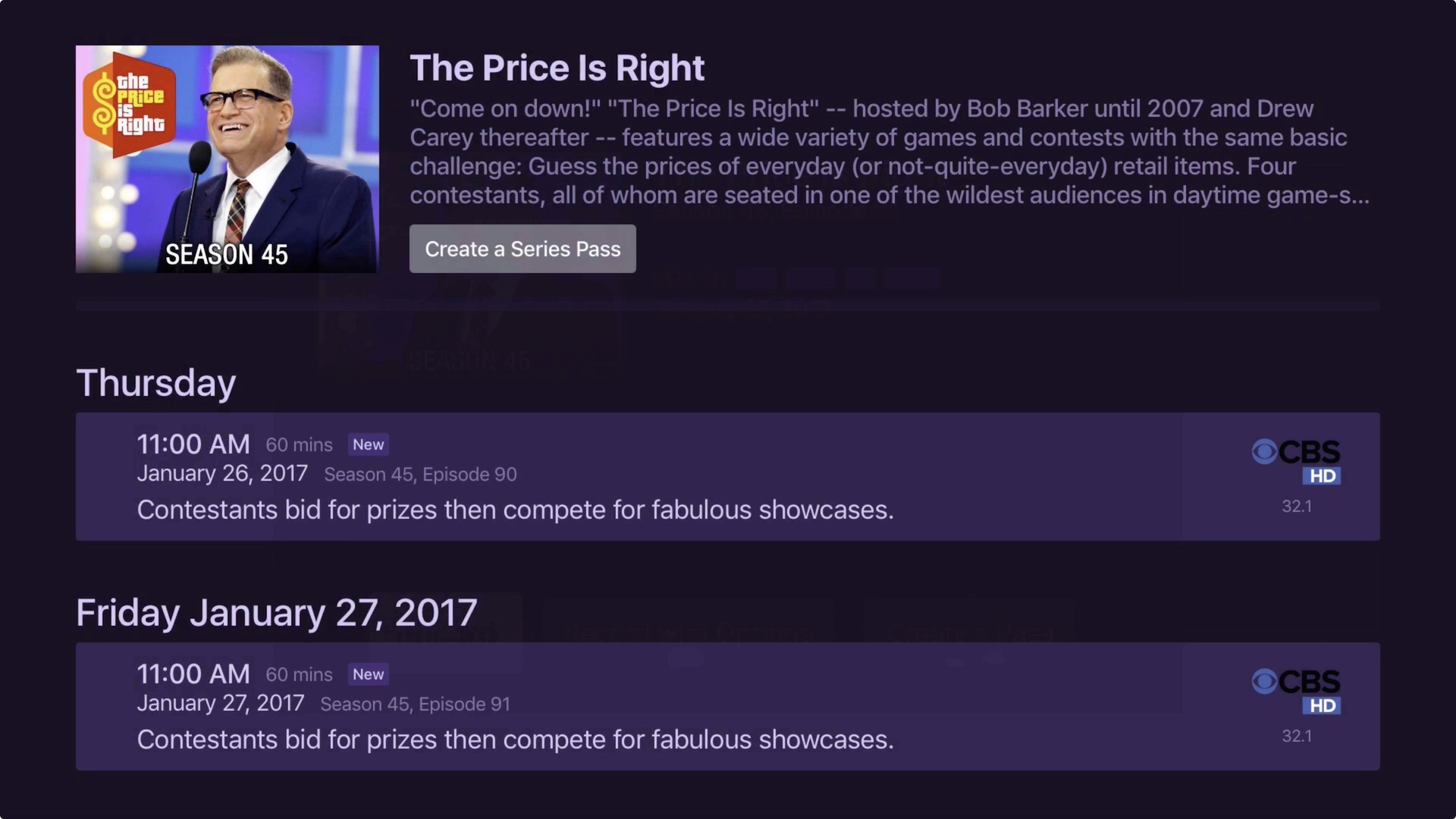 You can record single shows or a series of shows

It’s early in the game, but I’m already impressed with the interface. There are some features that I would like to see, such as the ability to one-click record an in-progress show directly from the guide interface, but there is exciting room for growth and the developers are actively monitoring feedback from beta testers. 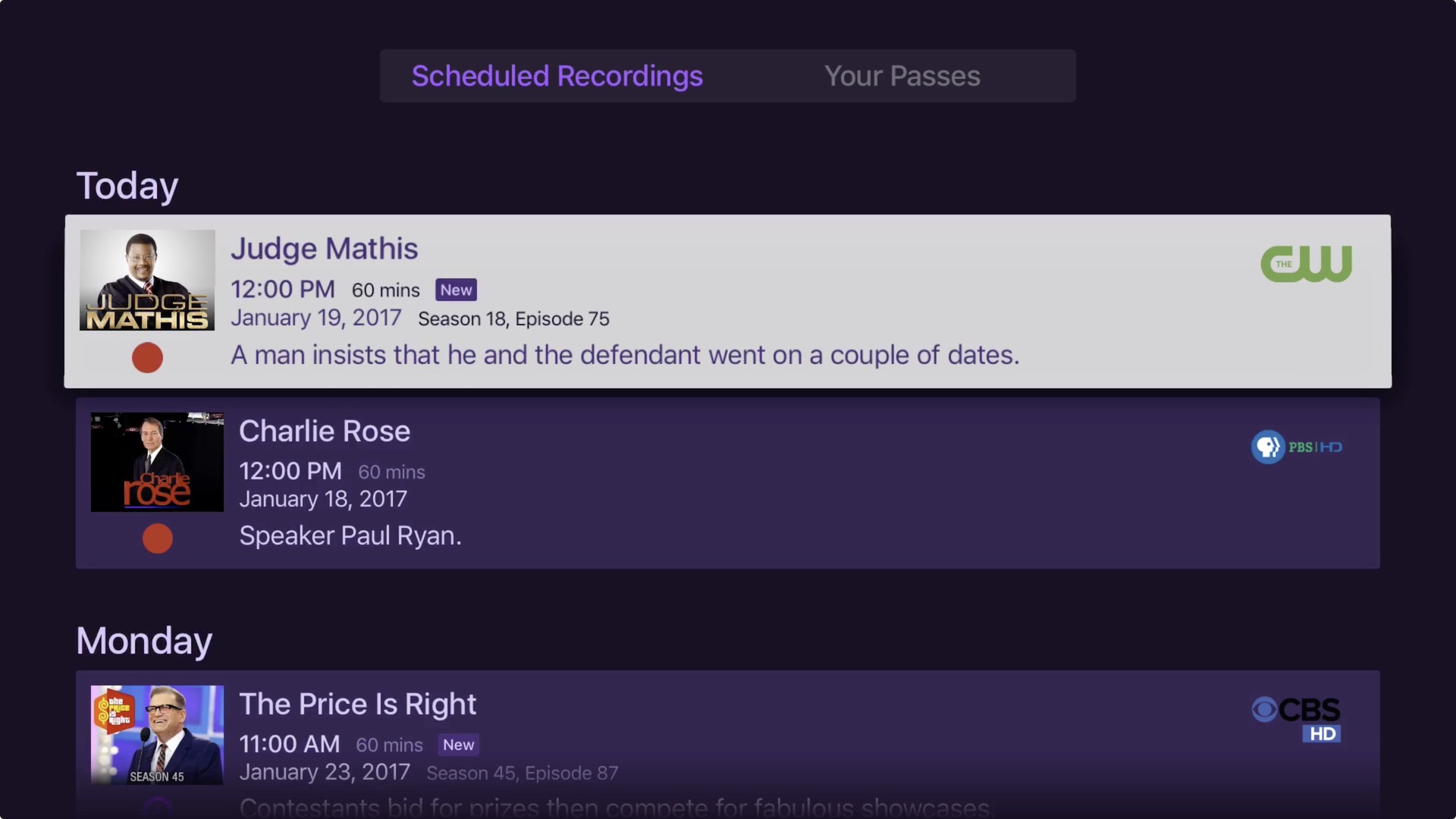 Two in progress recordings, thanks to my dual tuner HDHomeRun

One of my favorite things about using Channels DVR is the fact that it plays nice with multiple HDHomeRun boxes. For example, a single HDHomeRun box features dual tuners, so having two boxes would allow you to record four shows at the same time. Of course, the more streams you set out to record, the more resources will be used, so keep that in mind. Fortunately, my DS916+ has pretty beefy specs with 8GB RAM, so it was able to easily handle two streams with no issues.

If you’re a cord cutter, then the addition of a user-customizable DVR service is a compelling new option to add to the Apple TV. Of course, Channels isn’t the only app in the space, as the folks over at Plex have been doing some interesting things as well. I’ve also been testing the Plex DVR beta, and will have more details on that service in an upcoming post.

Channels for the Apple TV is $24.99, with the iOS version being a separate $14.99 purchase. If you’re new to Channels, be sure to watch our video covering Channels on iOS for an overview of the setup process with the HDHomeRun: