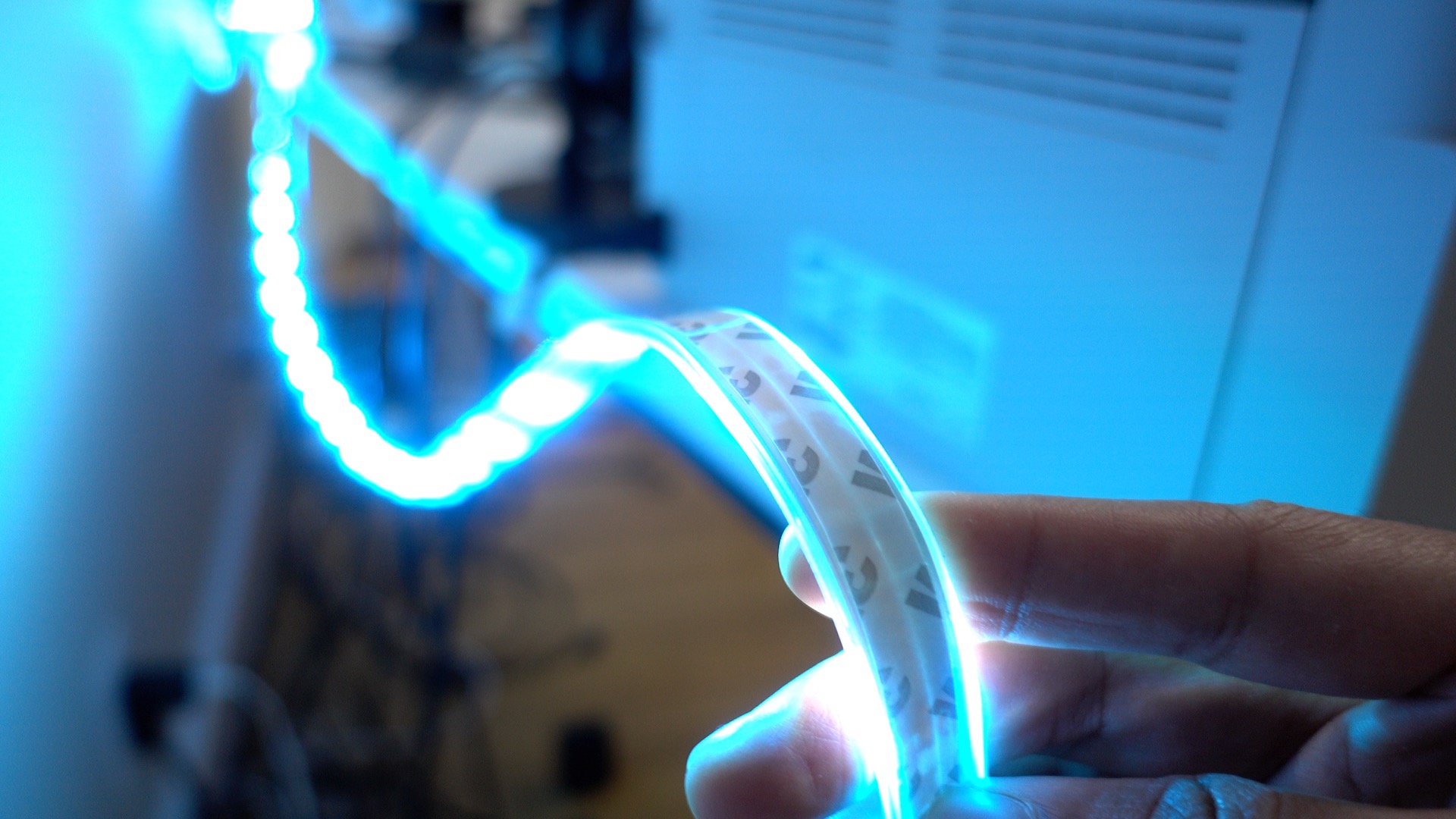 I’ve been a big fan of Philips Hue lights since the very first Hue Starter Kit was released back in 2012. I’ve been using that same initial set of bulbs ever since then, and have been largely happy with the experience.

Thanks to the success of that initial release, Philips has added many more Hue products to the lineup. It also produced a new second-generation HomeKit-enabled Bridge, which allows you to control your Hue lights directly from Siri or via the Home app features found in iOS 10.

But there’s one particular Hue product that I see utilized more than any other, and that’s Philips’ Hue Lightstrip. You’ve likely seen the $90 Lightstrip utilized in photos or on YouTube videos, and that’s because they’re a wonderful way to make practically any environment more interesting with minimal effort.

The latest version of the Hue Lightstrip is called the Lightstrip Plus. The Plus model, released in 2016, features the ability to utilize add-on strips, a wider color temperature range, and most importantly, much brighter light output.

As someone who regularly takes photos and videos, I wanted the Lightstrip to help add some variety to my office environment. My goal was to install the Lightstrip Plus on the back portion of my UpDesk standing desk, allowing the light to reflect off the wall.

The Lightstrip Plus comes with an 80-inch strip, which happens to be the perfect length for my standing desk. As mentioned, it is possible to add extensions to the Lightstrip to make it longer, but you can also cut the strip down using the scissor markings for shorter installations. Unfortunately, cutting a strip means that the unused portion of the strip goes to waste, although a quick Google search yields hardware hacks that people have employed to recycle cut strips. 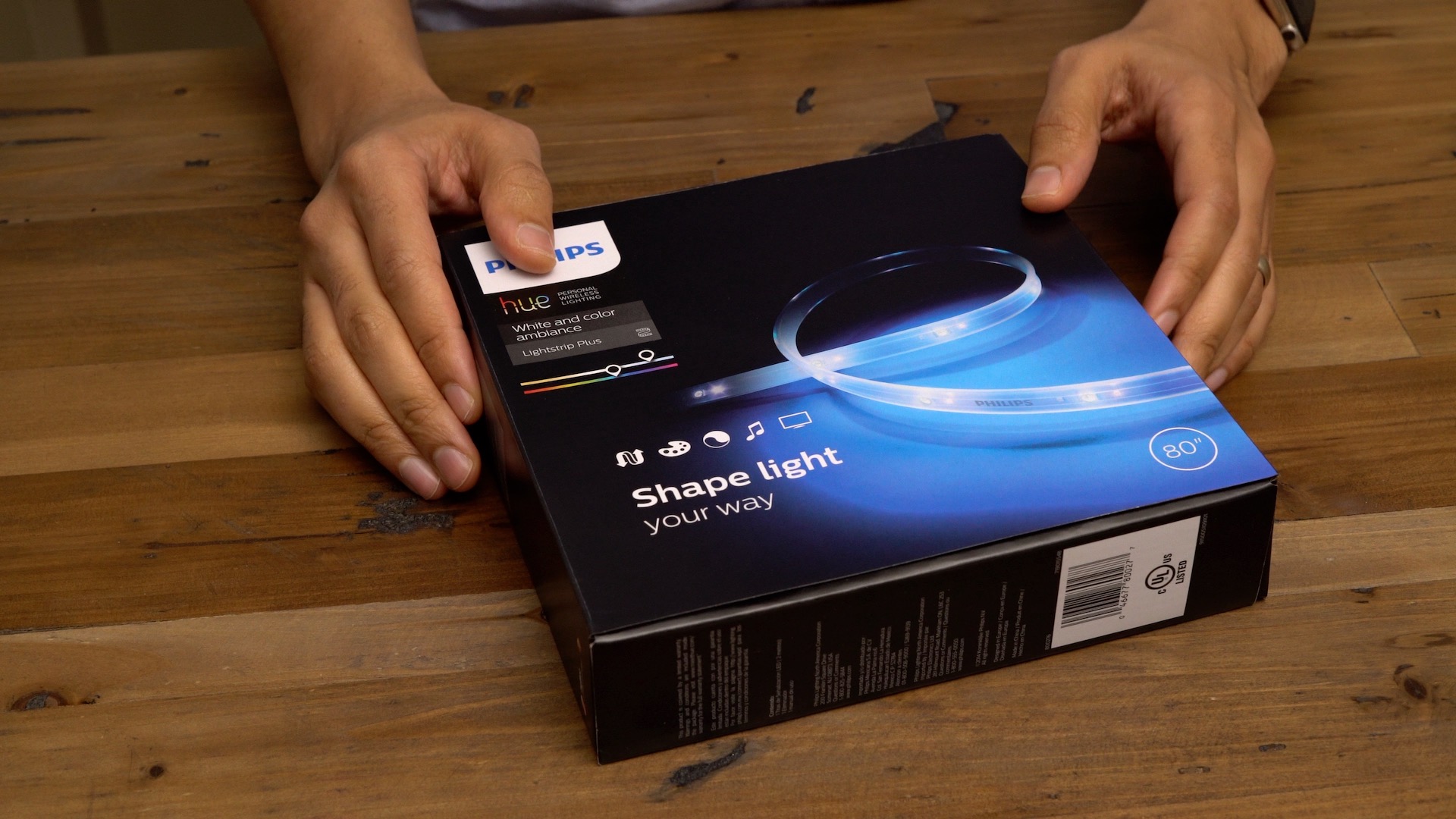 Included in the box is the 80-inch Lightstrip Plus, and a power adapter setup. What’s not included in the box is the required Philips Hue Bridge. You’ll need a Bridge in order to control the lights, and unless you already have one from a previous Hue installation, you’ll need to pony up for one. The Hue Bridge is available for $59.99 in a standalone package, but it’s also included with the Hue Starter Kit, which includes two white LED bulbs, for only $10 more. 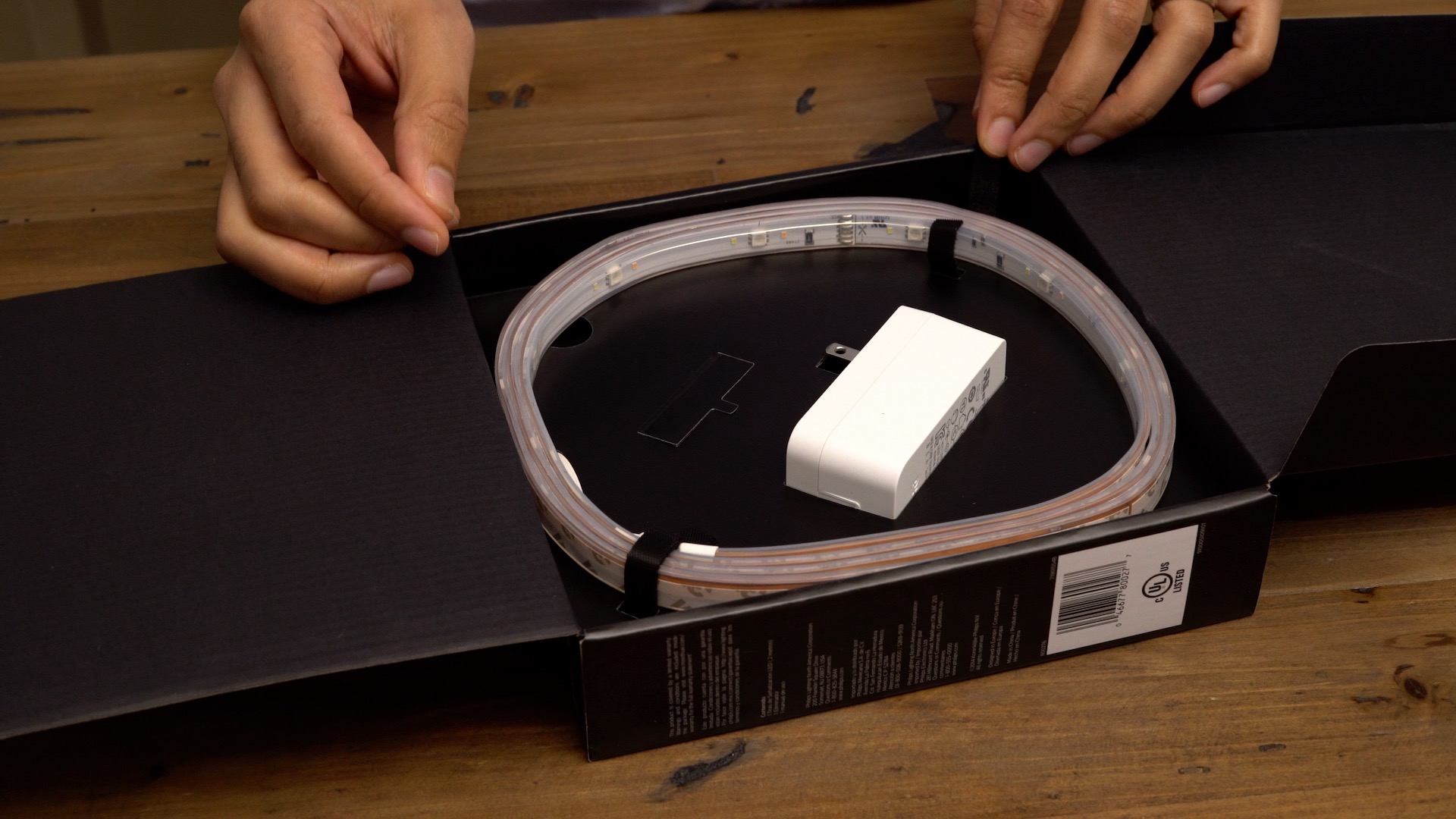 Before starting the installation, you’ll want to prepare. That involves measuring the application surface to make sure that it’s adequate, and also making sure that there’s a power outlet within range of the adapter’s reach. The power adapter is broken up into two parts; the portion that connects to the Lightstrip features 3M adhesive for easy installation. 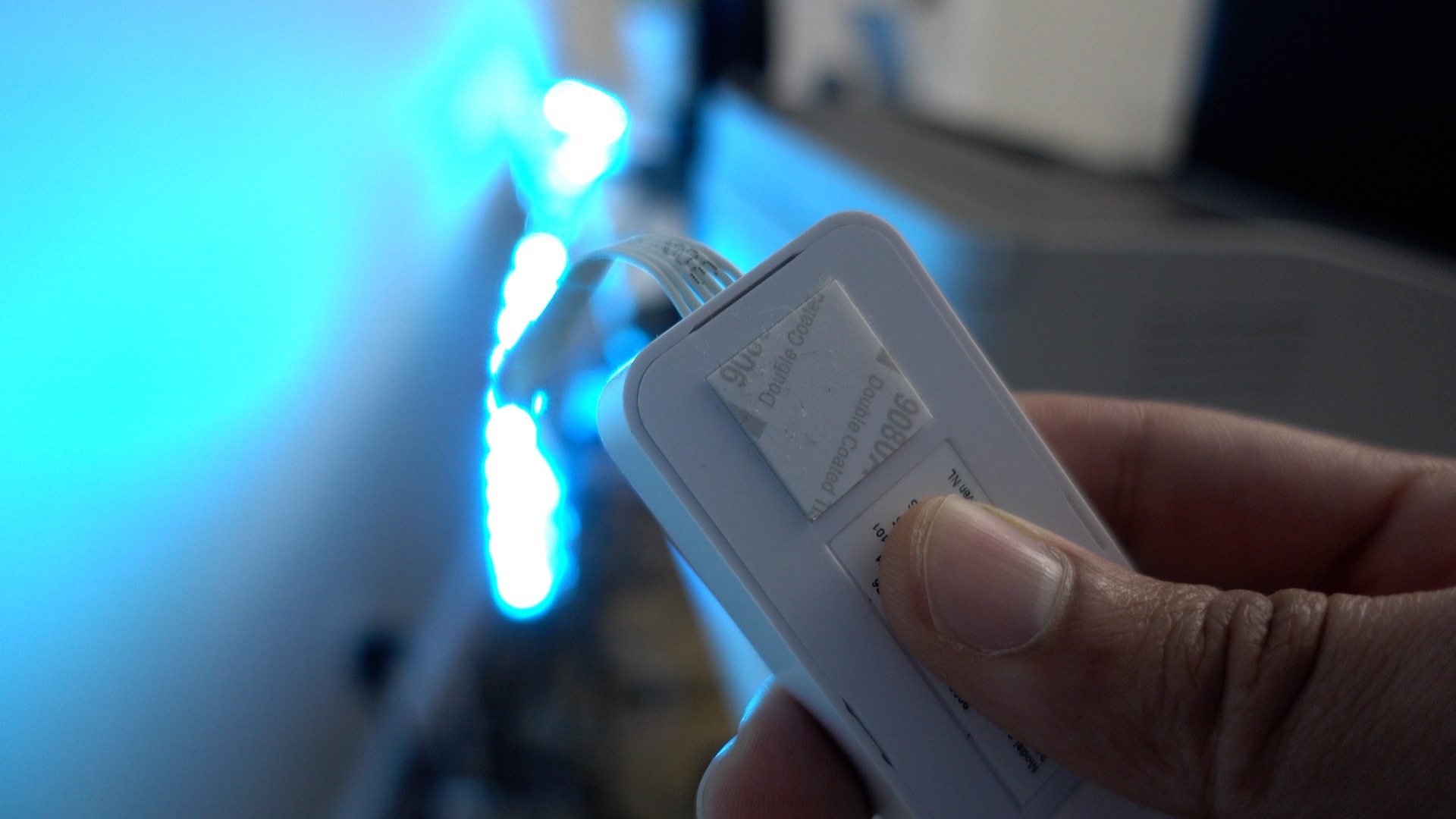 On the back of the strip, you’ll also find 3M adhesive, which is exposed when peeling off small sections of protective sheets. From there, it’s just a matter of sticking the Lightstrip Plus in the desired installation location. 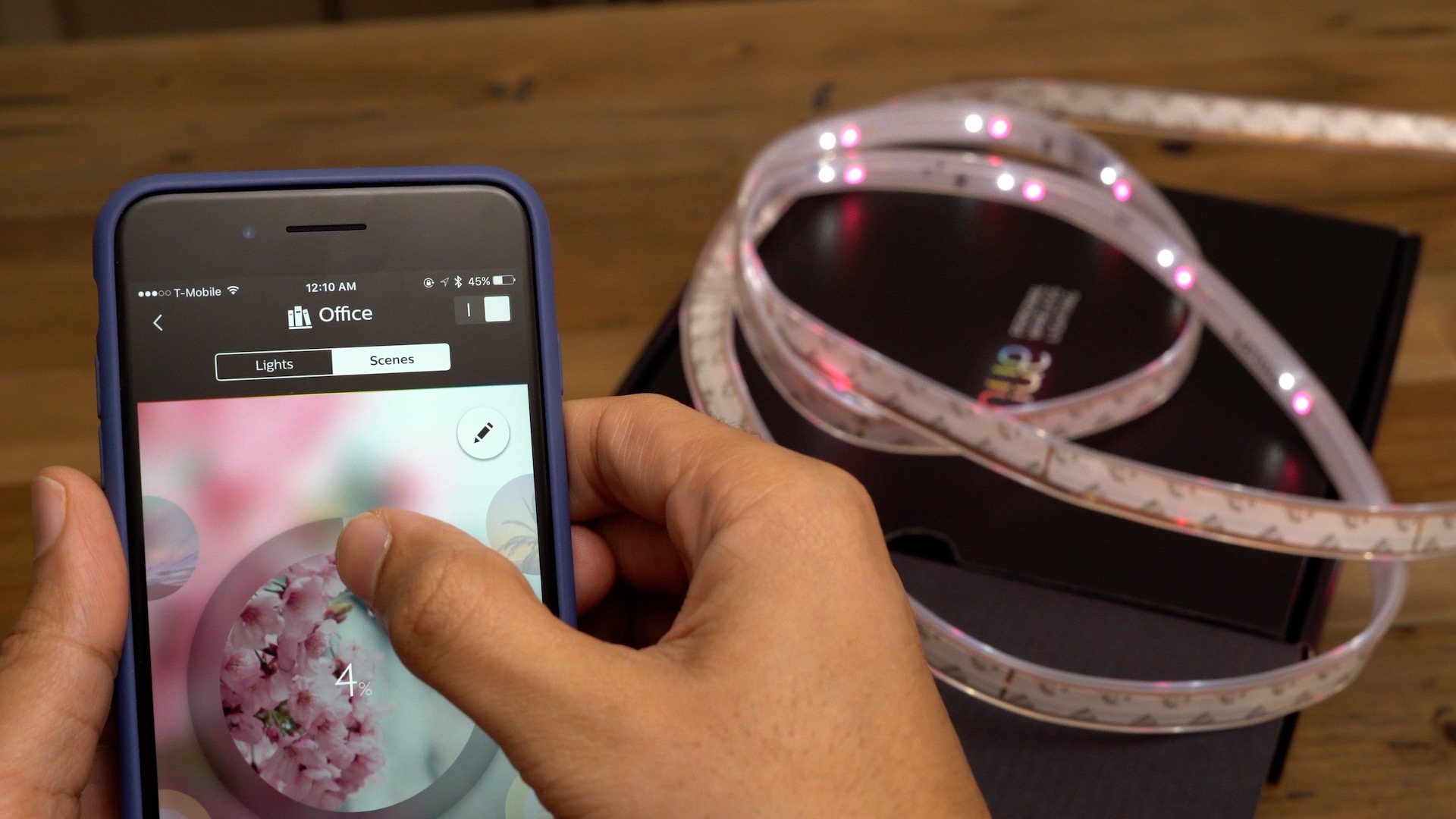 You can use the Philips Hue app to control the Lightstrip Plus, or you can use Control Center in iOS 10, Siri, or the Home app if you own the second-generation HomeKit-enabled Bridge. Controlling the Lightstrip is just like controlling any other Hue devices. You can change brightness, and color directly from the app on the fly. This allows you to create accent lighting that perfectly matches your mood or a particular scenario.

I especially like using the Lightstrip for product photography. It can instantly turn a normal shot into something much more interesting. The one downside that I find is when shooting videos with certain cameras and shutter speeds. Depending on the color of the lights and the shutter speed used on the camera, the LED lights can introduce a horizontal flicker effect. This can sometimes be eliminated in post, but it may be something you’ll need to play around with to get just right. 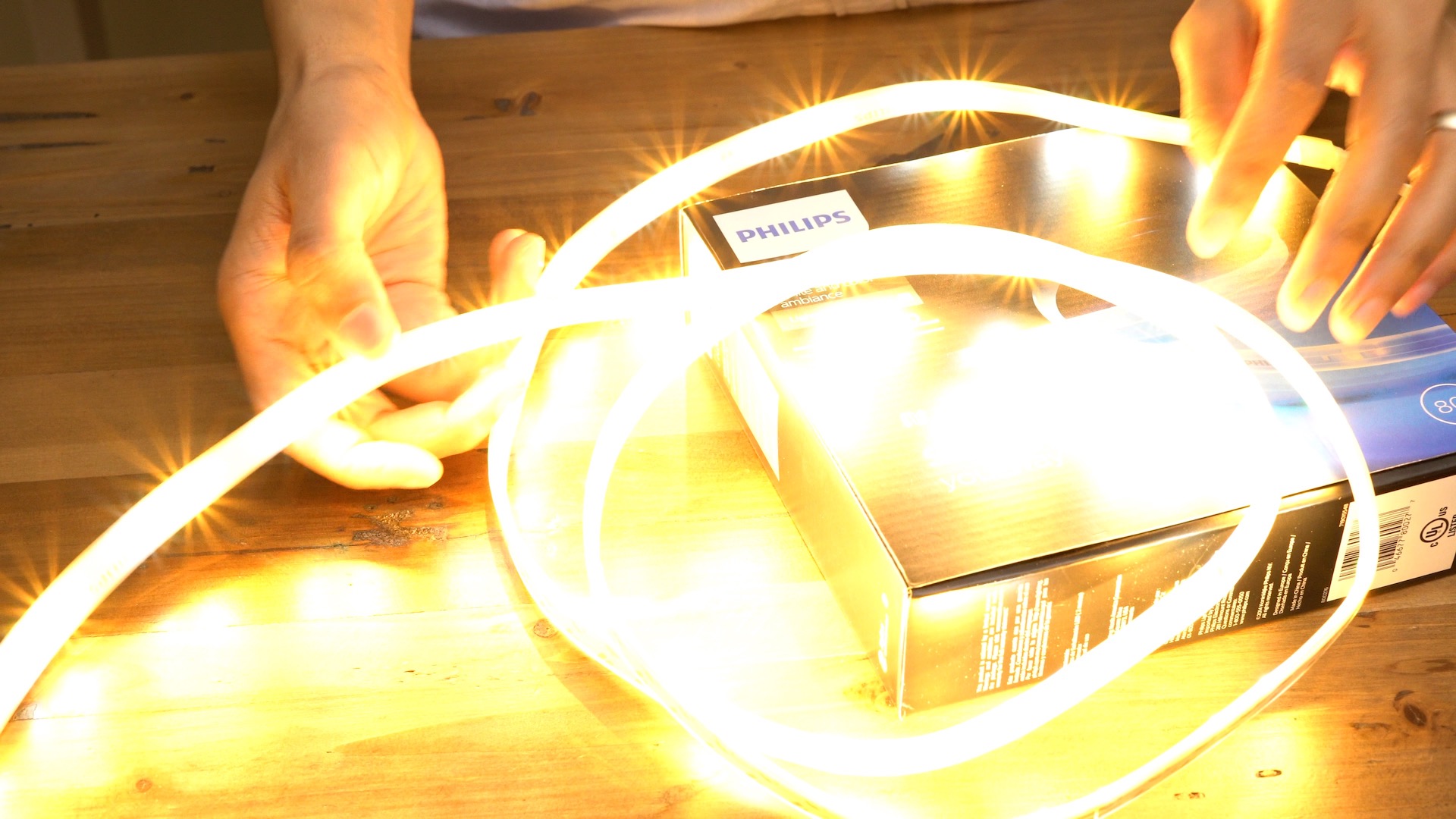 After installation, I was able to paint my wall with an endless amount of colors, which added some much-needed variety to my office. The result is more interesting photos and videos, and an environment that feels fun and alive. With just a little effort, you can install the LightStrip Plus in your home and do the same. 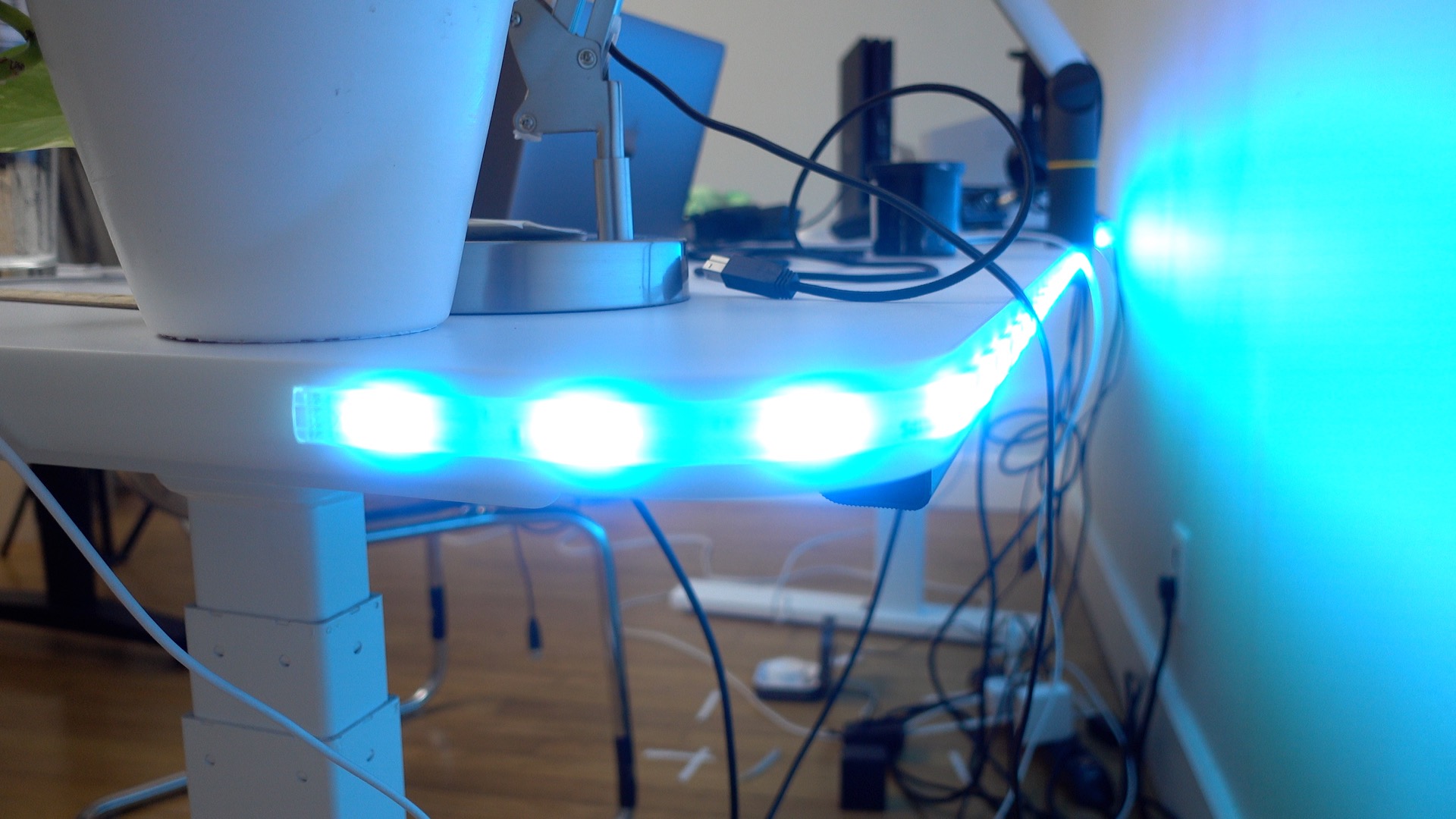 If you’re completely new to the Philips Hue phenomenon, then the cost of entry is somewhat significant when you factor in the price of the lights ($90) and the Bridge ($60). But if you’re already invested in the Hue ecosystem, then the cost will be less since you already own the Bridge.

But it’s a relatively small investment when you consider how the Hue might dynamically change the look of your environment with such a small footprint and minimal effort. For that reason alone, it’s easy to recommend the Philips Hue Lightstrip Plus if it fits in your budget.