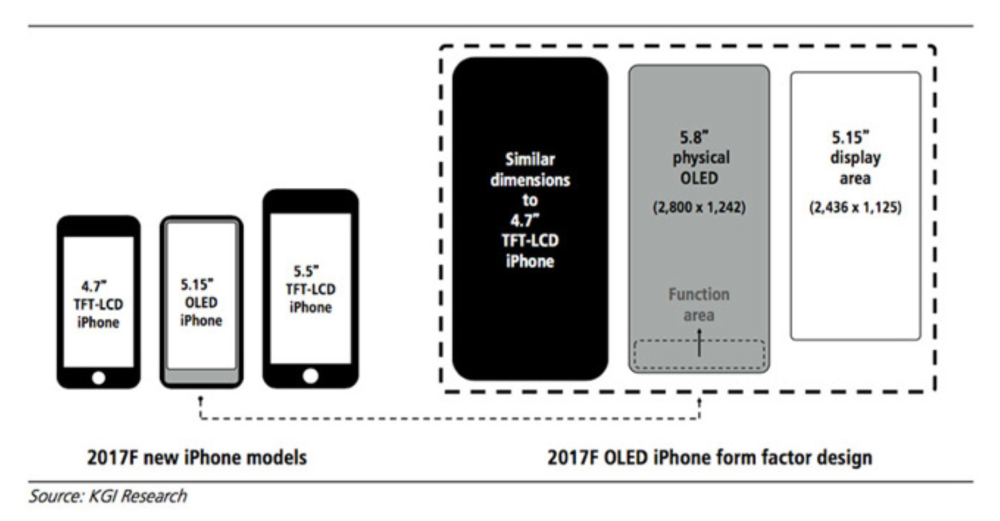 According to a new investor note from reliable Apple analyst Ming-Chi Kuo, Apple’s upcoming iPhone 8 will adopt a new “function area” at the bottom the display. This feature is possible due to the near bezel-less design of the iPhone 8 and subsequent bump in screen size to 5.8-inch.

The function area is said to be located in the same area as the current Home button and will thus replace Touch ID. Kuo notes, however, that Apple plans to make up for the lack of Touch ID with new biometric technologies that will be able to securely offer similar functionalities as Touch ID. While Kuo doesn’t dive into specifics, features such as facial recognition have been rumored before.

Kuo’s latest report also offers more details on size. With the new function area housing virtual buttons and other actions, Kuo says that the usable display real estate will be around 5.15-inches. The overall face of the device is expected to be 5.8-inches, though.

It’s unclear what exact will be housed in the “function area,” but it is likely that it will be some sort of virtual buttons and quick actions, perhaps similar to the Touch Bar on the MacBook Pro.

The most apparent change of the OLED iPhone will be a full-screen design, along with the elimination of the Home button and current fingerprint recognition technology. Of particular note is that we expect the OLED iPhone will adopt a 5.8” physical OLED panel. But the actual display area will be around 5.15”, and the rest will be an area for functions (e.g. allocation of virtual buttons).

Earlier this week, Kuo issued a note claiming that the 5.8-inch OLED iPhone 8 would be similar in size to the current 4.7-inch model, while also including a much bigger battery. From our report on Monday:

KGI says the dramatic increase in battery capacity is made possible by Apple adopting a stacked ‘substrate-like’ PCB mainboard. By making the board smaller, more space inside the device is available for battery chemistry. This is shown by the larger blue area in the diagram, provided by KGI research.

It has been rumored that the iPhone 8 will cost as much as $1000, a price that is higher than the current top of the line iPhone 7 Plus, but isn’t as crazy as it may sound on the surface. Other rumored features include an all-glass design, ‘wireless’ charging, and much more.

In another report today, KGI also explained that the iPhone 8 will be “the only bright spot among the new iPhone lineup” this year. Kuo predicts that momentum form the refresh will continue into Chinese New Year of 2018.

For all of the details concerning the new iPhone 8, head to our continuously updated guide. What do you think of Apple adding a new “function area” to the iPhone? Let us know down in the comments.