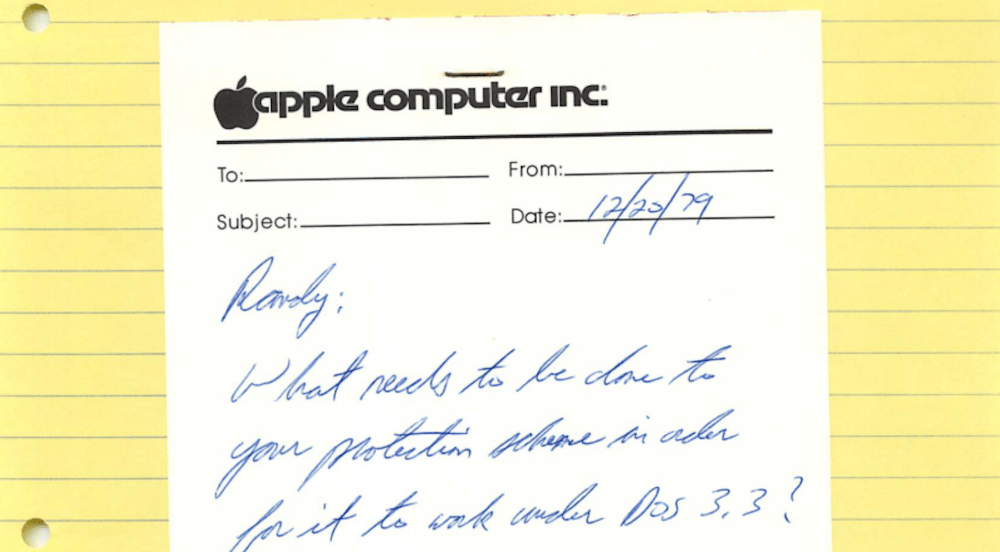 An interesting tidbit from Apple history recently made its way from a Seattle Goodwill to the web. In a blog post, a user by the name of vadermeer shared a handful of internal memos, progress reports, and other various notes from within Apple during 1979 and 1980 and some of it is surprisingly accurate today…

The memos appear to have at one point belonged to Jack MacDonald, who was the manager of systems software for the Apple II and Apple III. Not much is known about him today, but his memo collection is now out in the open.

The memos focus primarily on the story of an internal project referred to as “SSAFE,” or Software Security from Apple’s Friends and Enemies. The goal of this initiative, according to the memos, was to develop and implement copy protection routines for software.

They tell the story of project “SSAFE” or “Software Security from Apples Friends and Enemies.” This was a proposal to bring disk copy protection in-house to sell as a service to outside developers. Inter-office memos, meeting notes and progress reports all give a good idea of what a project life cycle looked like.

The memos run from January 10th, 1979 through June 25th, 1980 and mention a handful of names that we recognize today, including co-founder Steve Wozniak. Apple engineer Randy Wigginton is also featured throughout the memos, though Steve Jobs doesn’t make any appearances.

Amusingly, one of the references to Wozniak is while talking about the security of the SSAFE initiative.

There are approximately 30 different protection schemes for protecting proprietary software. The current version of the protection allows Woz’s hardware assisted procedure to copy the diskettes. Randy feels that if he has a version that Woz can’t copy then it is as protected as possible.

Another interesting tidbit relates to the suggestion that an encryption be implemented with a hardware accessory. A memo from Barry Yarkoni, who later went on to work at IBM, however, calls the idea of hardware anti-piracy tools “totally unacceptable.” So yes, even in 1979, dongles were a thing and Apple still uses them, despite them being “a case of the cure being worse than the disease.”

Also interesting is the below memo with a simple enough, and in some cases still true, subject line:

The full treasure trove of documents dug up from the Seattle Goodwill can be read here.  Gizmodo dove deep into the collection and pulled out some of the more notable bits.