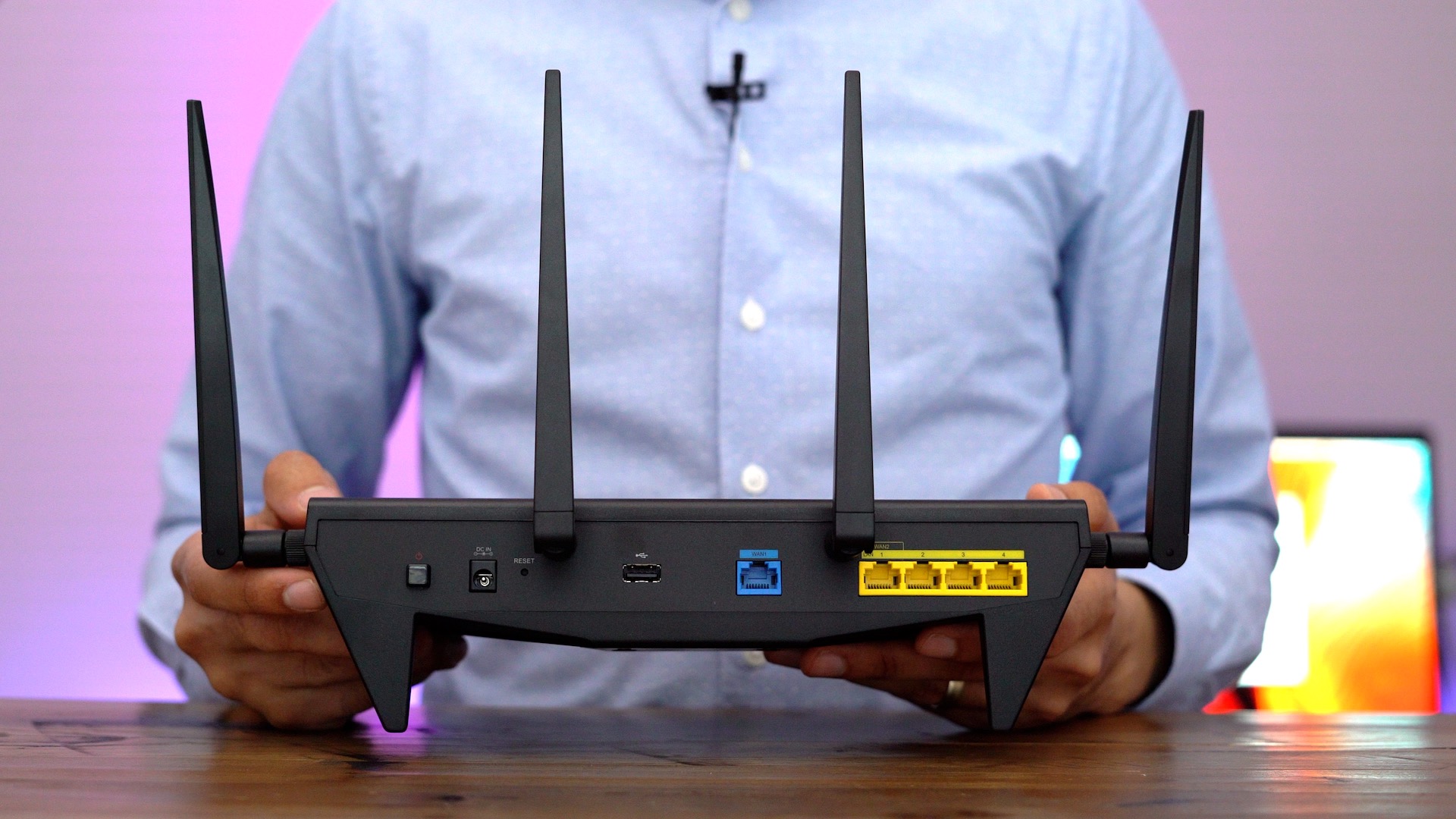 Since the news broke that Apple is getting out of the router business, I’ve been looking to replace my AirPort Extreme. I wanted something with more power-user features, and the Synology RT2600ac stood out as a likely candidate. The $229.99 RT2600ac, which is the follow-up to last year’s popular RT1900ac, contains a wealth of new additions, and is considerably more power-user friendly than Apple’s AirPort Extreme.

Synology’s routers run the SRM operating system, which makes managing the RT2600ac similar to driving one of the company’s popular NAS boxes. But does this router make a good replacement for the easy-to-use AirPort Extreme? Have a look at our hands-on video walkthrough as I showcase 15 of my favorite RT2600ac features.

The 2600ac supports the 802.11ac wave 2 standard, meaning it includes 4×4 MU-MIMO support. MU-MIMO lets the router connect to multiple devices at the same time instead of sequentially, taking full advantage of the its available bandwidth. Many client devices that we use today, including the iPhone 7, don’t yet support MU-MIMO, but future devices inevitably will.

As far as wireless coverage is concerned, I noticed that my iPhone was able to maintain full wireless signal strength anywhere in my house when connected to the RT2600ac. With the AirPort Extreme, I had a few areas where the signal would drop a bar when connected to either band. 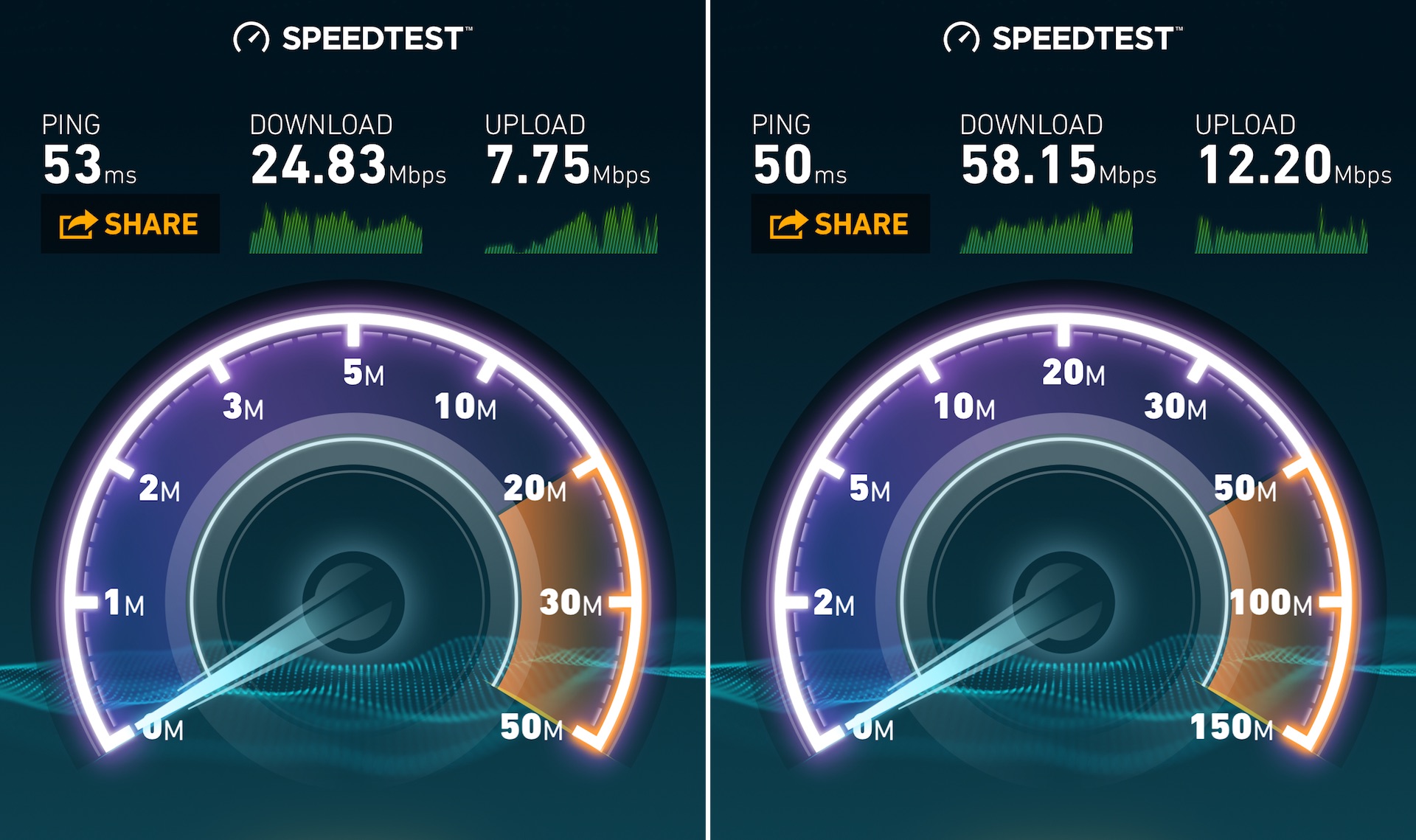 Airport Extreme vs RT2600ac from the same spot in my office

I performed a speed test from my office, which happens to be one of the areas where the signal drops, and I noticed a moderate speed difference while on the 2.4 Ghz band. Granted, this is far from a scientific test, and more of a feature overview, but I’m quite happy with the RT2600ac’s wireless performance in various areas around my house. It even performs well out in the garage, a spot where I usually have trouble maintaining a decent connection.

That said, I live in a fairly modest house, so you might be better off checking out mesh network options like the eero or Google Wifi if you dwell in a large multi-floor abode.

Powering the RT2600ac is an unspecified 1.7 Ghz dual core chip, which is accompanied by a healthy 512 MB of RAM. Such a hardware investment proves to be worthwhile, as it ensures that the unit’s SRM web interface is responsive and snappy.

Update: Synology has pushed an update for the RT2600ac to fix the KRACK WPA2 exploit. You should update to SRM version 1.1.5-6542-3 as soon as possible.

Synology’s RT2600ac ships with a feature called Smart Connect, which combines the unit’s SSID with the shared Wi-Fi settings for both 2.4 GHz and 5 GHz bands.

As you move a supported device closer to the router, it will automatically switch to the 5 Ghz radio, which is more effective at closer range. But as you venture further away from the router, the device is switched to 2.4 Ghz. Hence, Smart Connect affords compatible devices the best possible connection based on location, and the user doesn’t have to worry about manually connecting to a certain SSID.

One of the best things about the AirPort Extreme is how easy it is to set up and manage using the AirPort Utility app. Synology, too, is known for its easy-to-use interfaces, and it doesn’t disappoint with its iOS app. 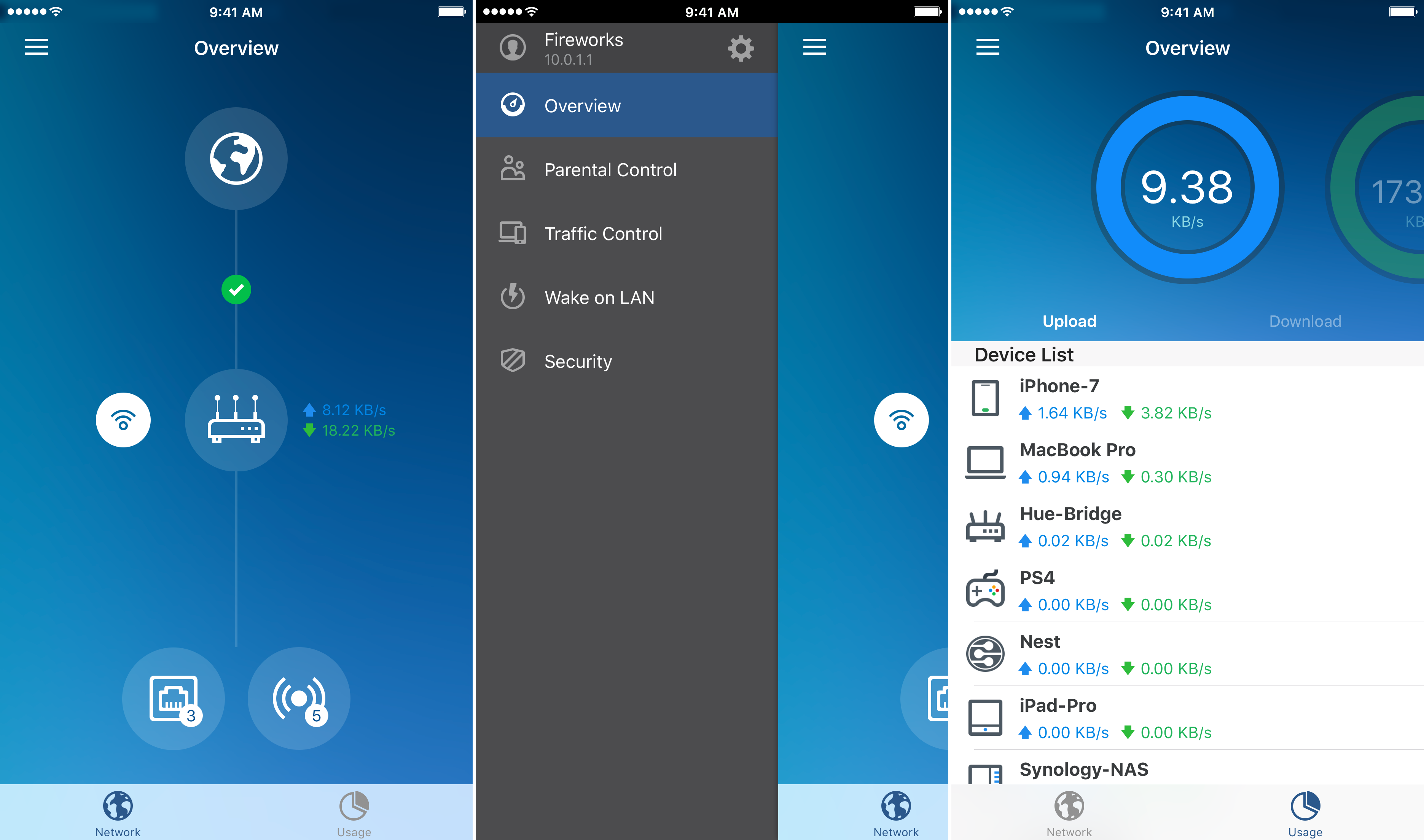 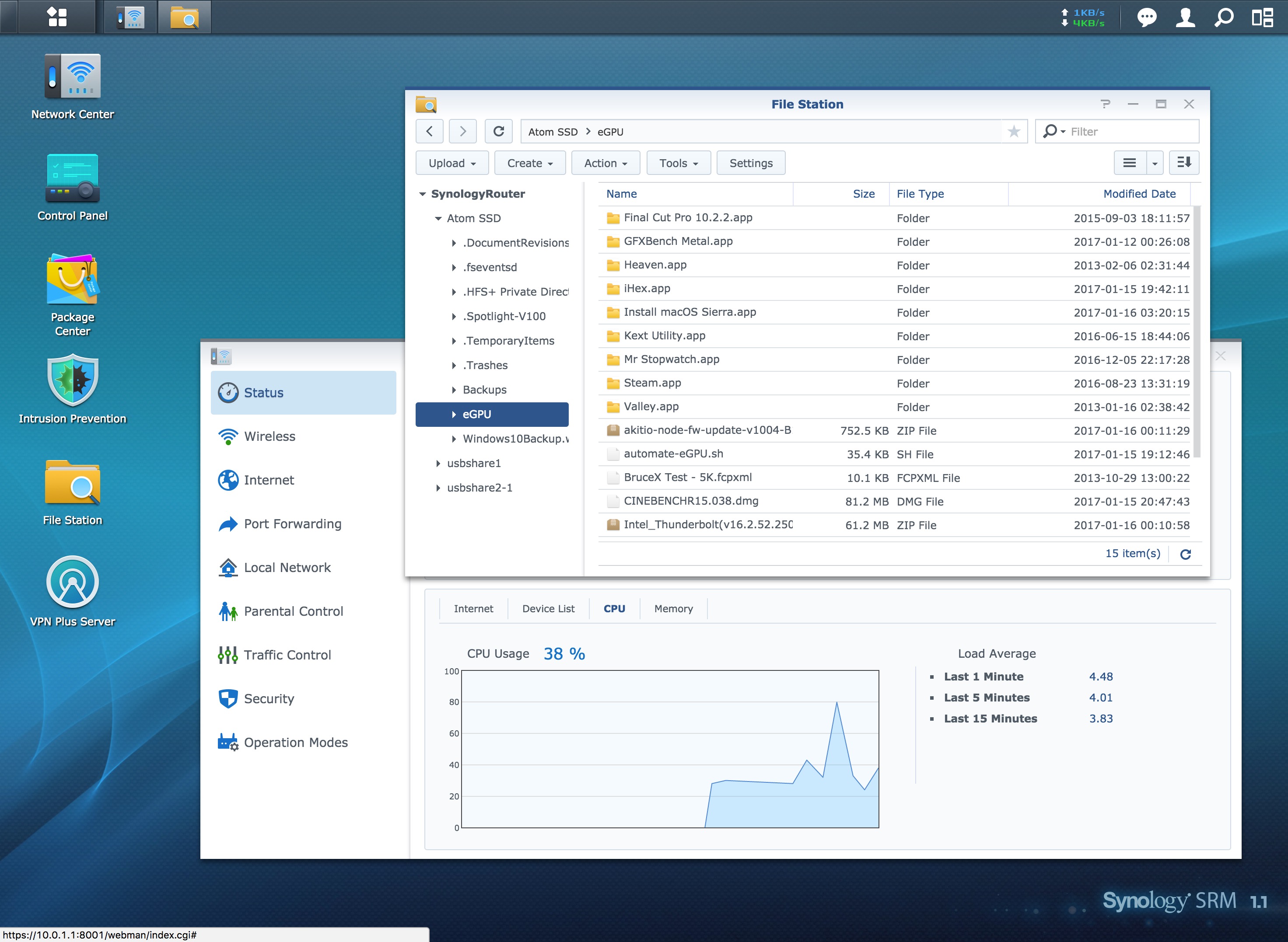 SRM is the beautiful web interface that features much more fine-grained control over a sprawling suite features. You can use SRM from an iOS device, but for quick management, the DS Router app is the way to go while on mobile.

The RT2600ac can help parents manage what their children are allowed to view online, and is a major perk to owning this router. To set up content filtering, simply visit the Parental Control section of SRM to select a device on your network to filter. You can even use parental controls to schedule specific Internet access times. 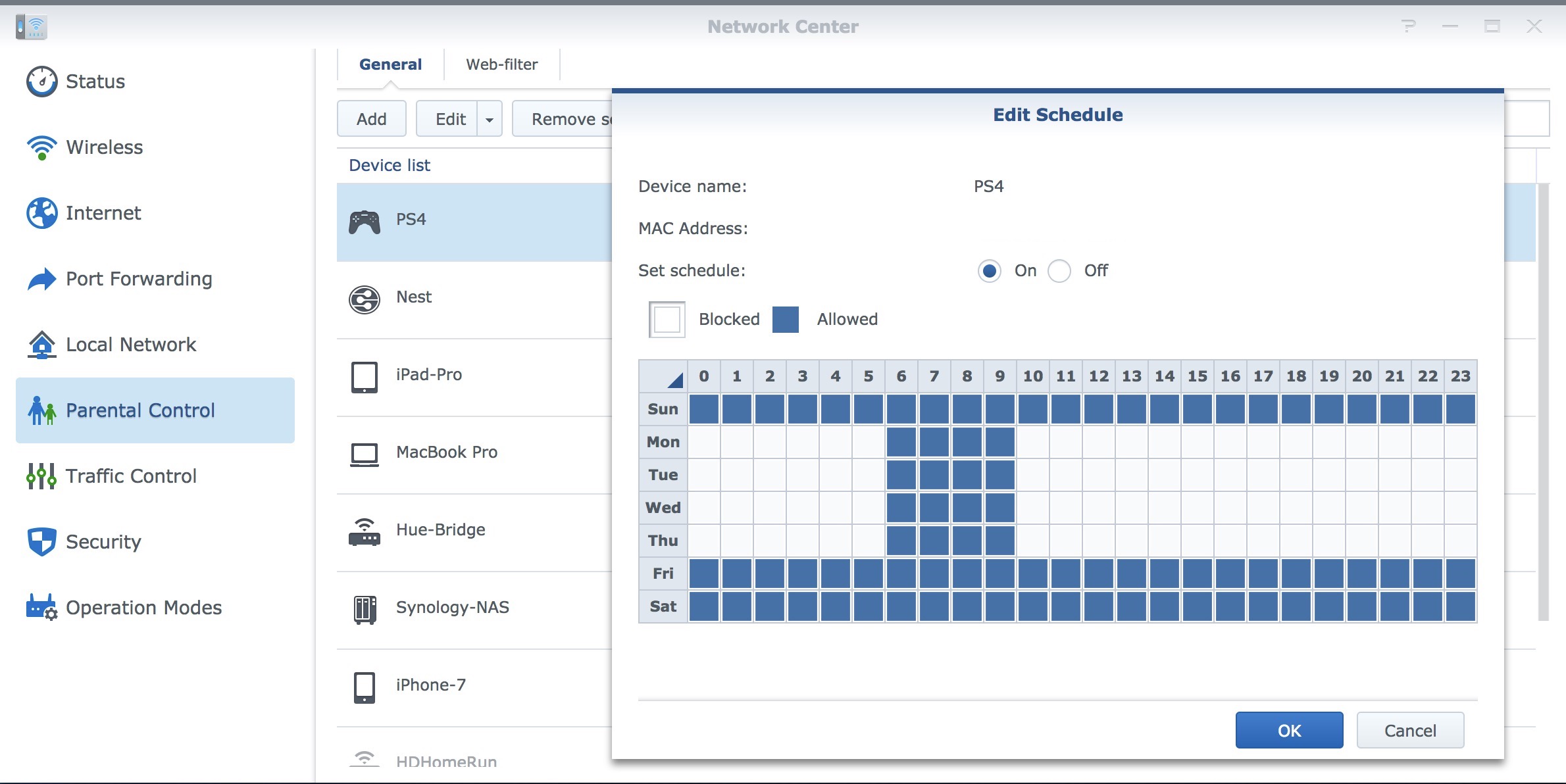 Because it’s from Synology, it only makes sense that the RT2600ac contains built-in NAS features. Thanks to the router’s USB port and SD Card slot, users can connect an external drive or SD Card to transform the router into a basic NAS. Keep in mind, though, that USB 3.0 may cause interference with the 2.4 Ghz radio. Synology gives users the option of downgrading the port to USB 2.0 if desired.

Synology’s Package Center on SRM is loosely synonymous with Apple’s App Store. There, you’ll find a handful of packages that can be used to enhance your experience and add new features to the router. And because the RT2600ac features external storage capabilities, users can download both router-specific and NAS-centric packages. 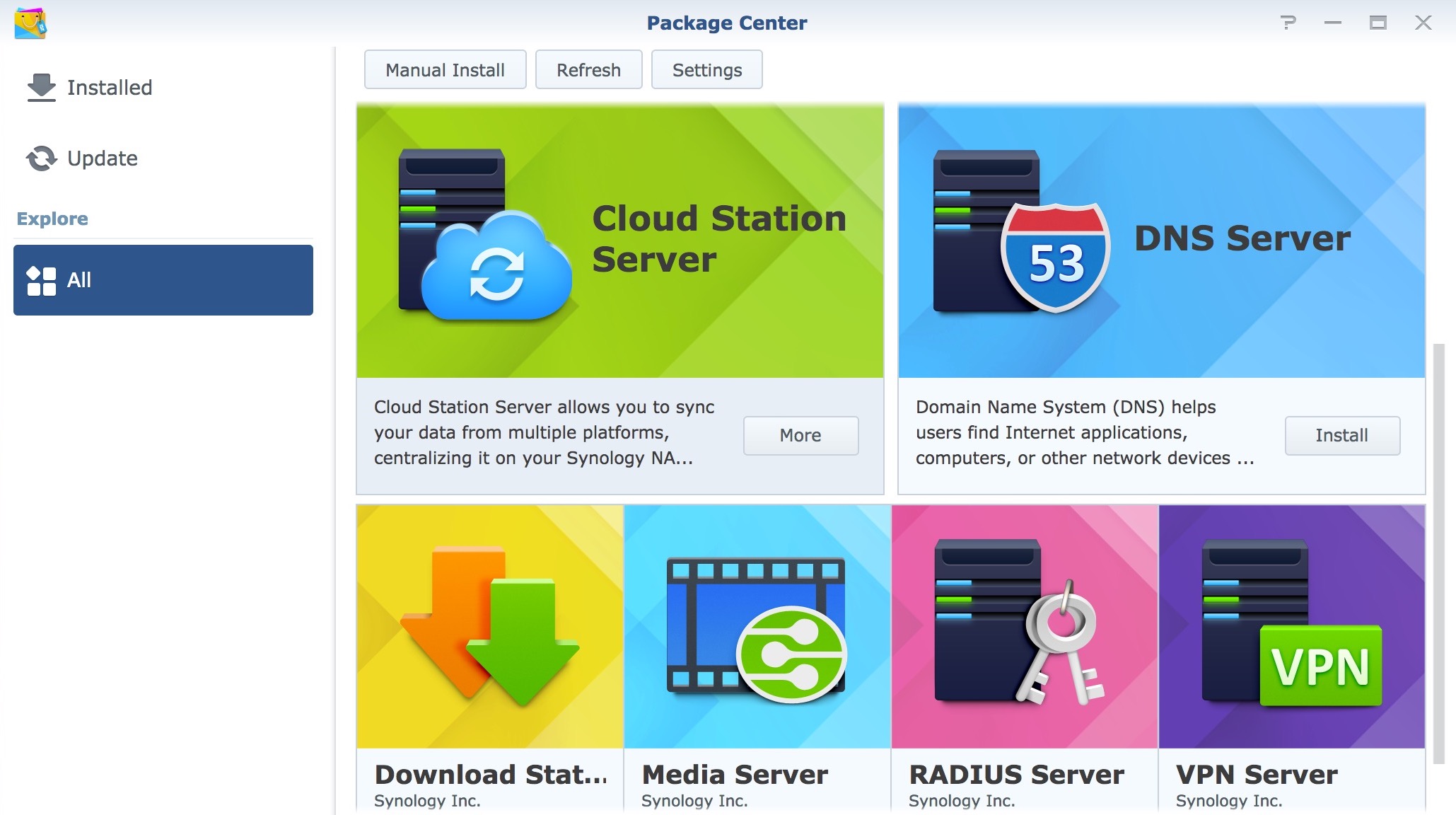 It’s possible to use the LAN port closest to the WAN port as a secondary WAN port for failover and load balancing. Doing so will reduce the number of available LAN ports from four to three. 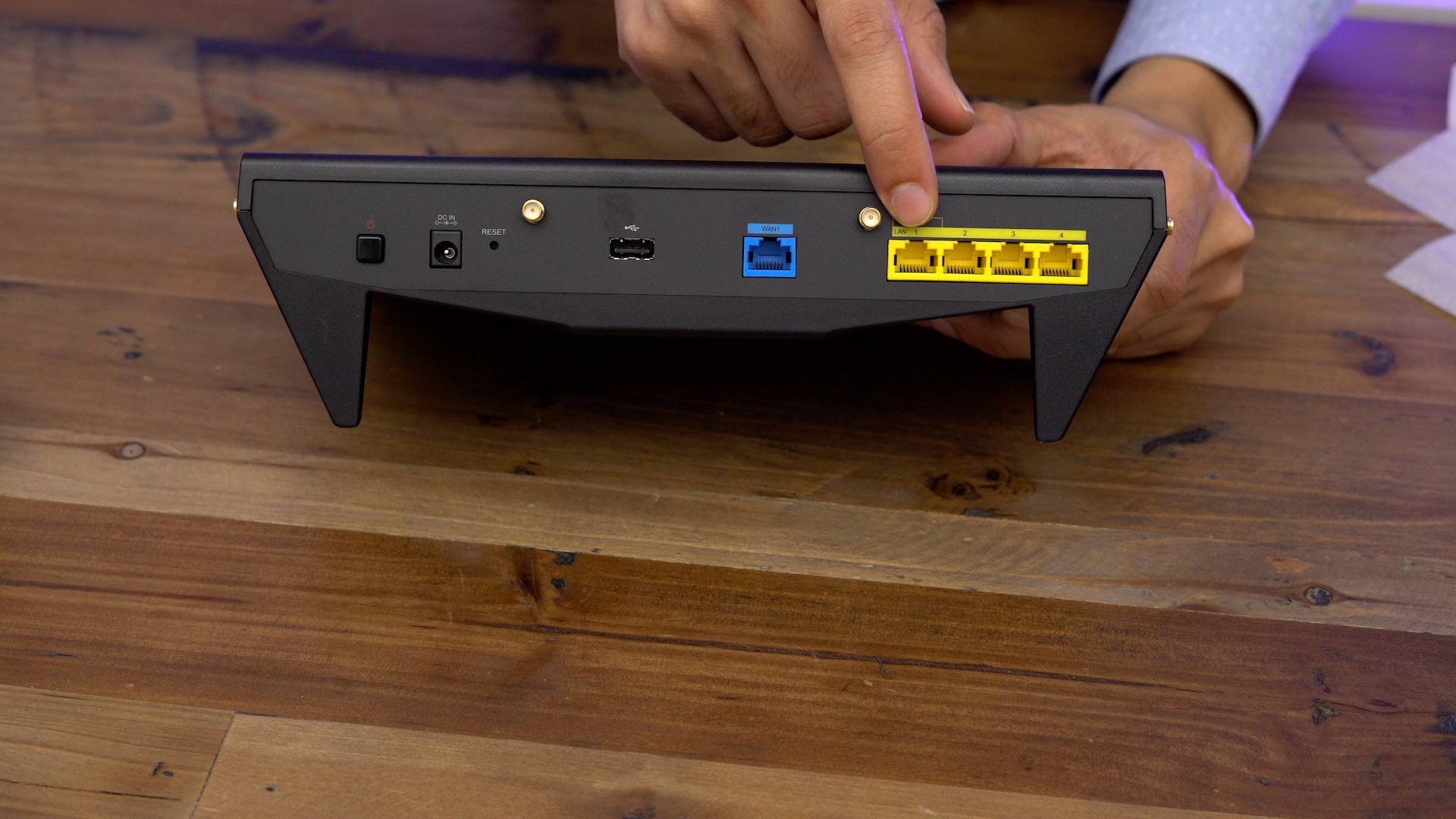 Advanced users can connect two outward-facing Internet interfaces, such as a cable modem and a DSL modem, and have them work together to help ensure stable connectivity at all times. When one interface goes down, the other will shoulder the Internet connectivity responsibility. 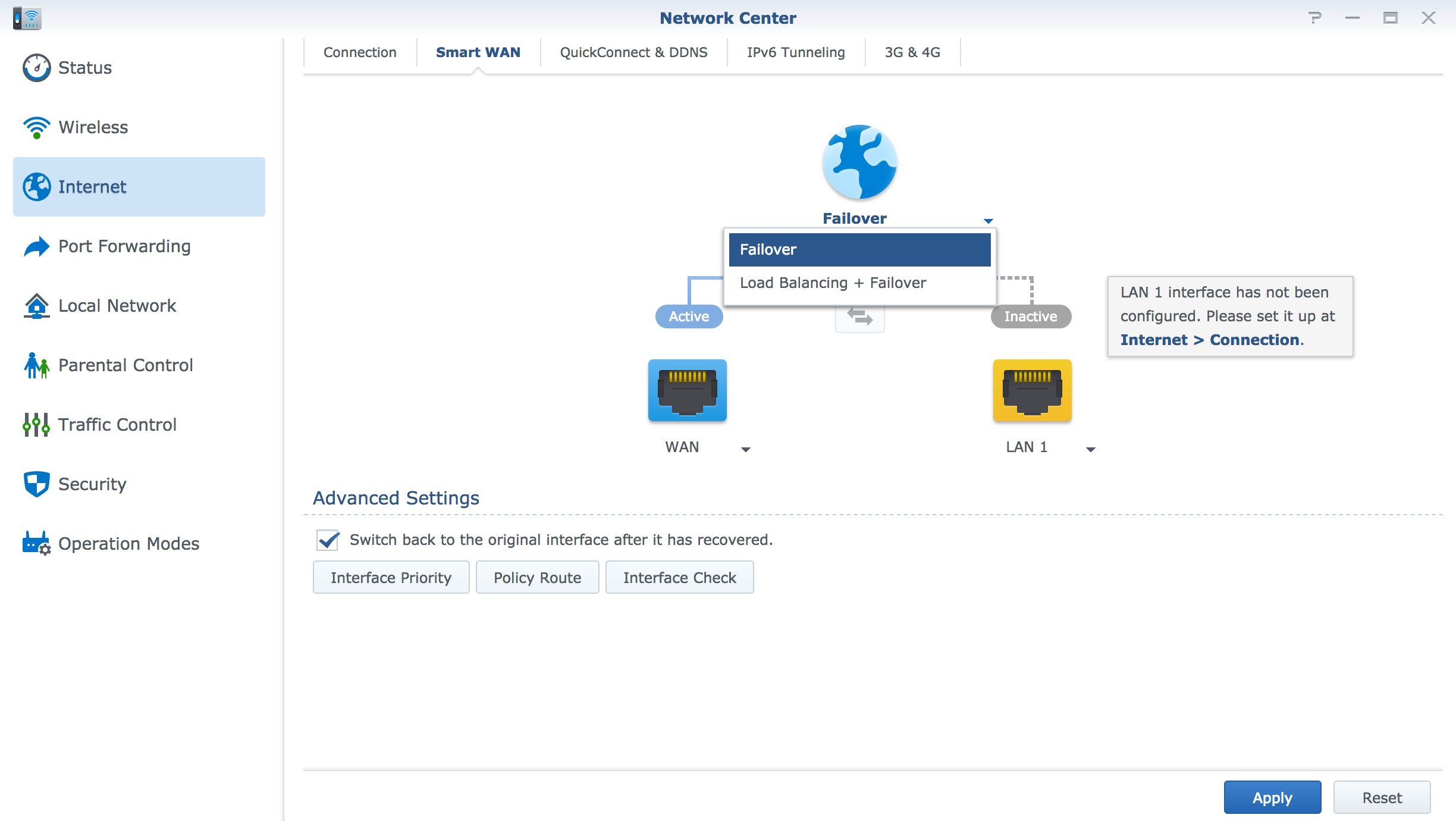 As if an extra WAN port for network interface failover wasn’t enough, the RT2600ac supports select 3G and 4G dongles for sharing cellular connectivity with the client devices connected to your network. This gives users a backup plan when the main Internet connection goes down.

This may sound like a simple feature, but I love the fact that the RT2600ac features a hardware power button for turning off the router, and a Wi-Fi button for disabling Wi-Fi. These are good features to have when you’re troubleshooting, and it makes it so that you don’t have to disconnect the power plug in order to turn it off, and you don’t have to venture into SRM to disable Wi-Fi.

Another seemingly small feature that I really appreciate is the ability to disable the router’s many flickering LED indicators. The RT2600ac takes it a step further by allowing users to set a custom schedule for the LEDs. 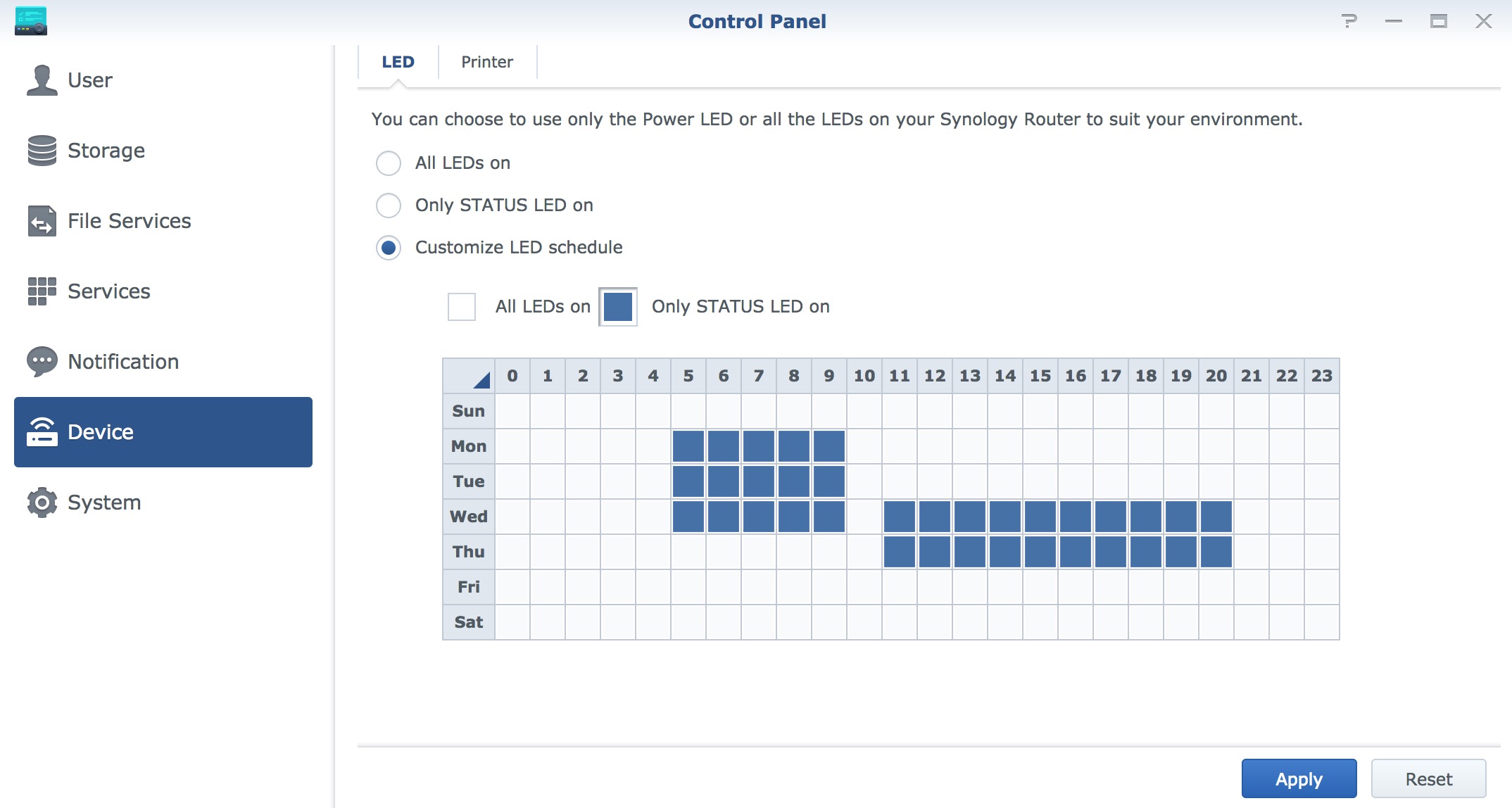 QuickConnect is a Synology feature that affords easy communication with the router from outside of the network when using Synology apps. You can also use DDNS to access your router while away from your home network. Synology provides a free and easy-to-remember synology.me domain for those that wish to keep the process simple and straightforward.

By installing the VPN Plus Server package, users can quickly use their RT2600ac to set up a VPN. Synology offers its own SSL VPN with corresponding iOS and Android apps for quick and easy VPN access from anywhere. 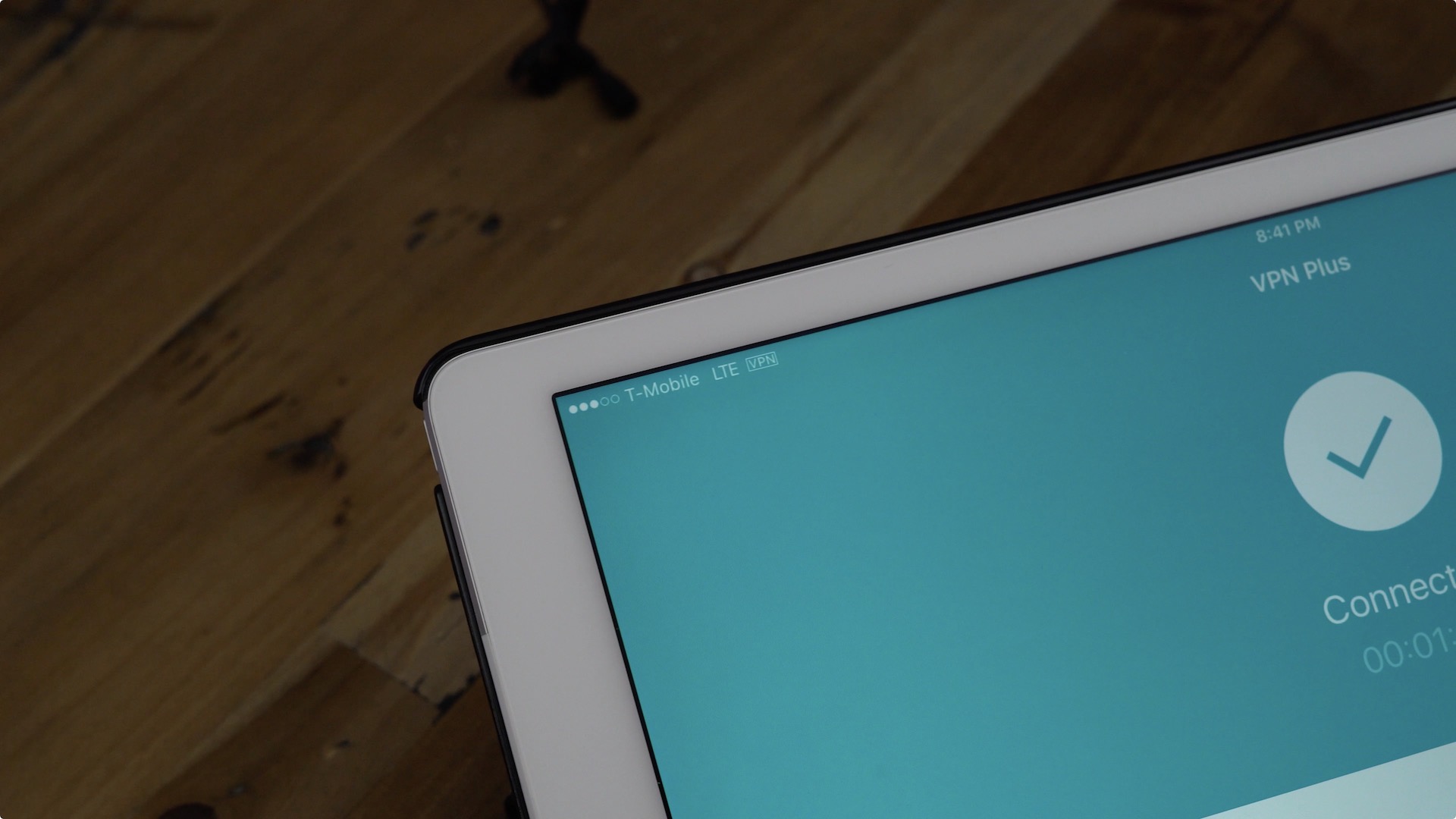 The RT2600ac also supports SSTP, OpenVPN, L2TP and PPTP. If you often use Wi-Fi hotspots while on the go, Synology’s VPN features can help keep you safe and secure while away from home.

If you’re looking to monitor bandwidth usage on your network, then you’ll be happy to know that the RT2600ac features awesome monitoring and logging tools built right in. For basic device bandwidth monitoring and logging, you can look at the Monitor page under the Traffic Control section of the Network Center in SRM. This allows for live bandwidth monitoring, but also lets you see traffic over the last 24 hours, last week, etc.

For more in-depth statistics, you can generate traffic reports over certain periods of time. These traffic reports are extremely in-depth, and provide overall bandwidth usage, as well as individual device bandwidth activity. The reports are attractive and easy to read, which means that you don’t have to know a lot about networking in order to understand them. 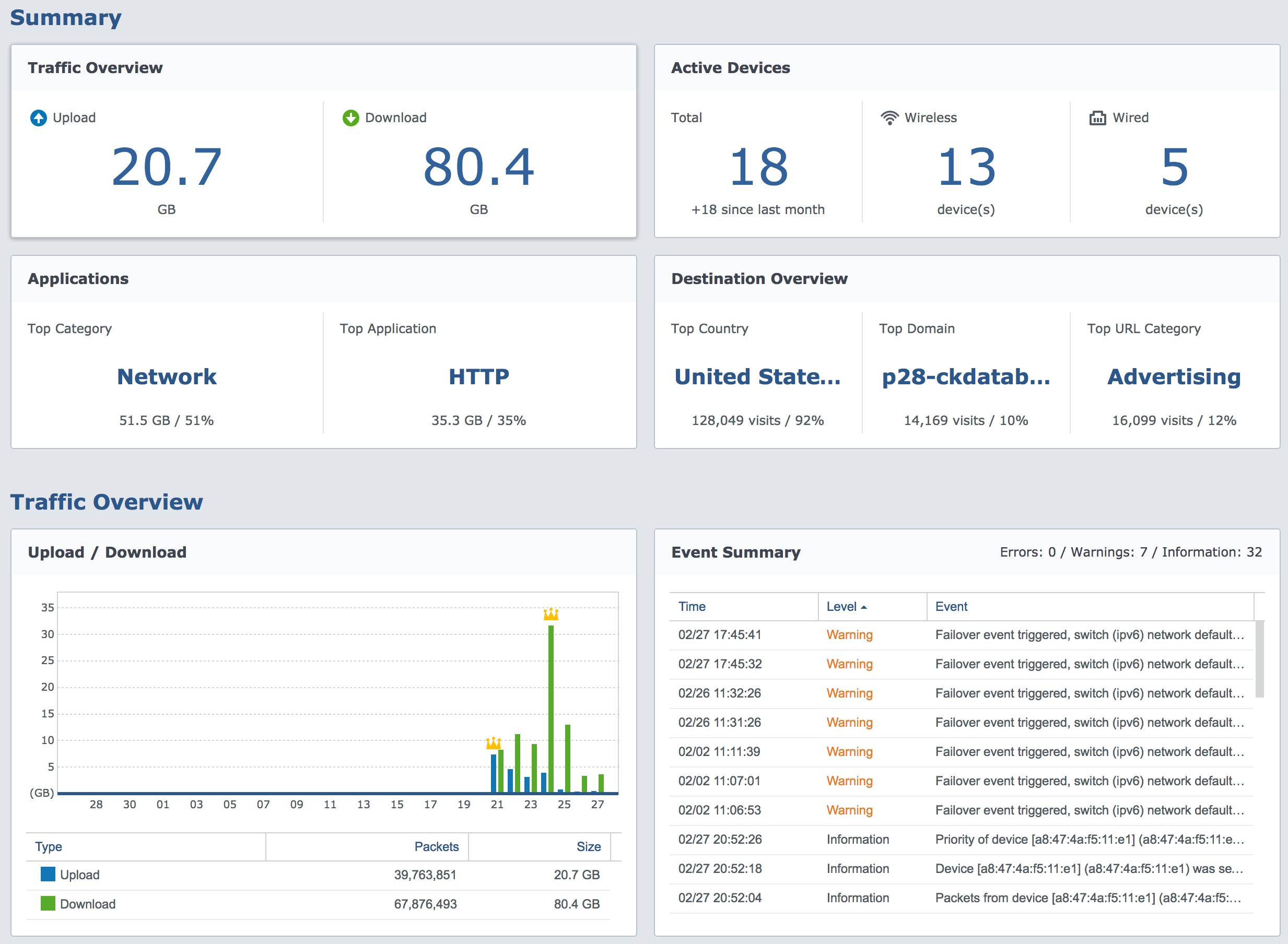 If you’re moving from a device like the AirPort Extreme, then I recommend considering the Synology RT2600ac. Not only should its wireless tech serve you well into the foreseeable future, but it’s also extremely easy to use thanks to SRM and the DS Router app. 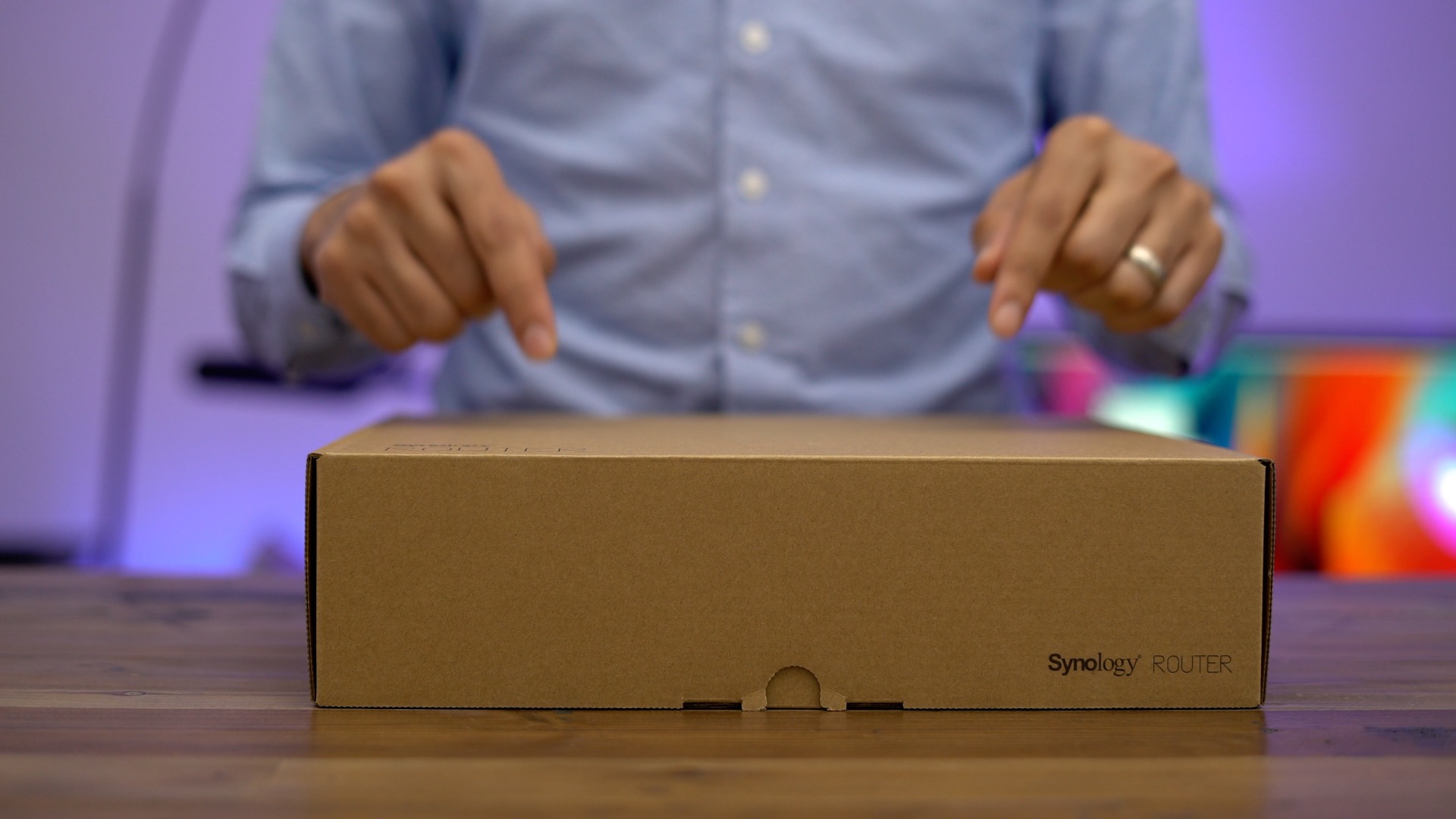 Ease of use is something that’s normally not associated with networking hardware, which is one of the things that made the AirPort Extreme and its companion AirPort Utility app so attractive. But Synology’s SRM offers a remarkably good-looking and easy-to-use interface that’s way more powerful.

SRM balances ease of use with power-user features in a way that I’ve never seen on a router, and while there is a slight learning curve involved, it’s well worth it for all of the features that you get.

If there’s one knock to make against the RT2600ac, it’s that it is nowhere near as good-looking as the latest generation AirPort Extreme. The slanted black plastic chassis with four antennas emerging from the body isn’t going to win it any design awards.

But the looks of the router are easy to forgive once you experience the variety of features and performance offered by this router. Chances are it’ll probably be hidden away from eyesight anyway. 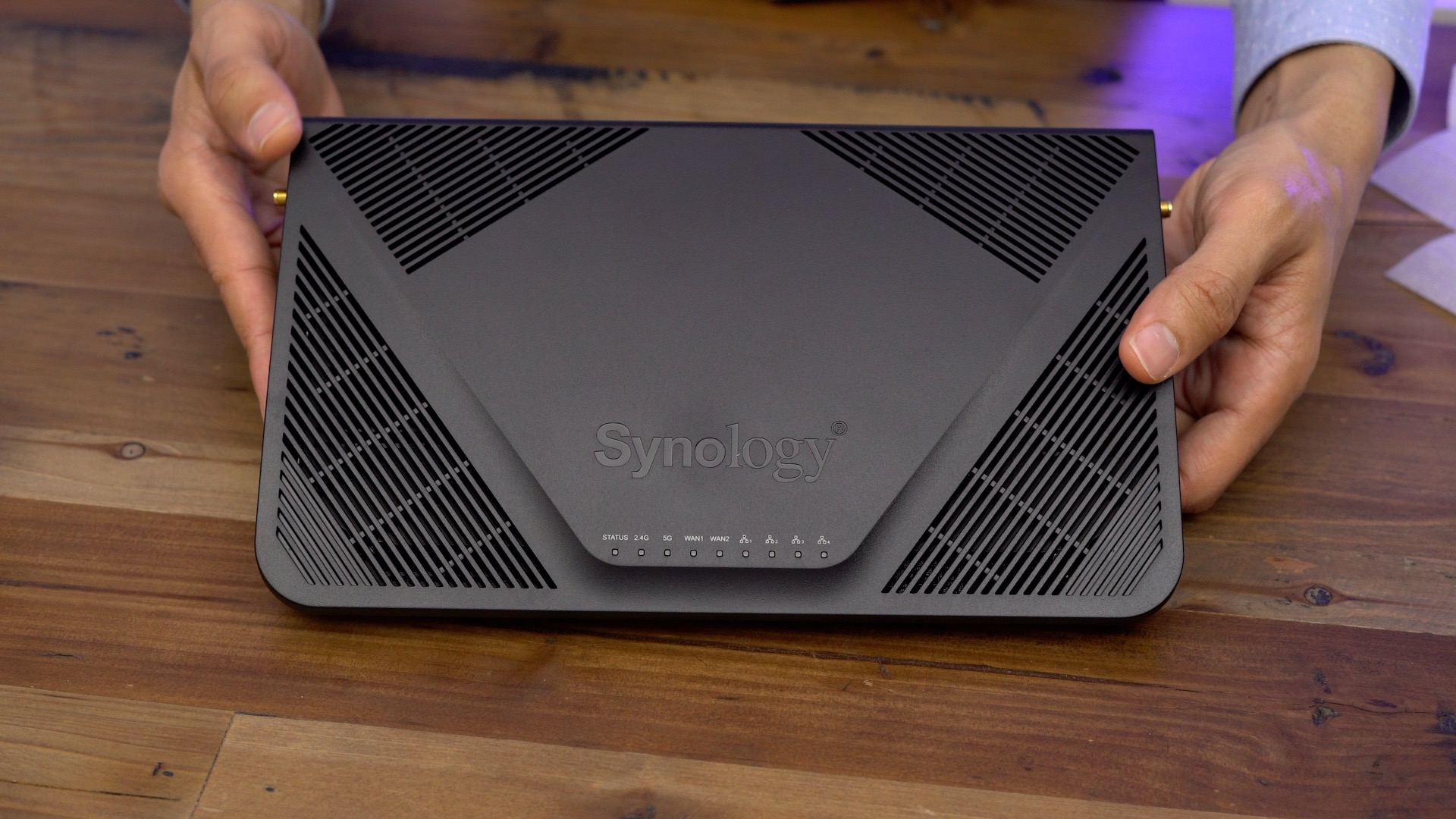 You can purchase the RT2600ac right now from Amazon or from B&H Photo Video.

What router are you currently using? If you’re an AirPort Extreme or Time Capsule‎ owner, do you have plans to move on to different hardware?

The AirPort Extreme is an Apple-produced Wi-Fi base station. The latest version features 802.11ac technology with six internal antennas.