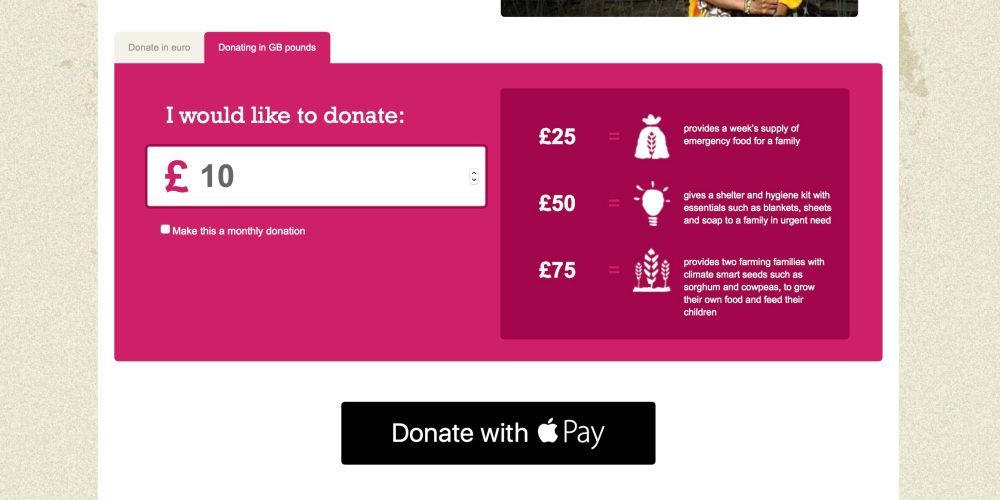 Following a launch in late 2016 for the US, Apple Pay in the UK now supports over twenty local charities. This means Apple users in Britain can make donations online using the same, simple, Apple Pay flow with Touch ID authentication.

Apple Pay on the web is supported on iPhone, iPad and the latest version of Safari for Mac. See the full list of UK charities already onboard after the jump …

Apple has previously said that online shopping websites see higher rates of conversion when customers use Apple Pay compared to typical online purchase checkouts. Apple Pay enables customers to securely pay for goods without having to worry about typing in credit card information or remembering passwords.

To signify where Apple Pay is being used for nonprofit work, charity websites include ‘Donate with Apple Pay’ badges. Making a donation is as simple as finding the button on a charity website and using the normal one-step Touch ID authentication to confirm the payment.

Although more charities will be added over time, Apple is launching with twenty one UK nonprofit partners:

As Apple Pay on the web doesn’t require a NFC contactless chip, Apple Pay for charities and web purchases supports newer iPads as well as iPhones, and natively on the 2016 MacBook Pro. Other Macs running macOS Sierra can also make Apple Pay web purchases, deferring to a paired iOS device to confirm the sale.