You can now try out the hidden ‘floating’ iPad keyboard in iOS 10.3 within Swift Playgrounds 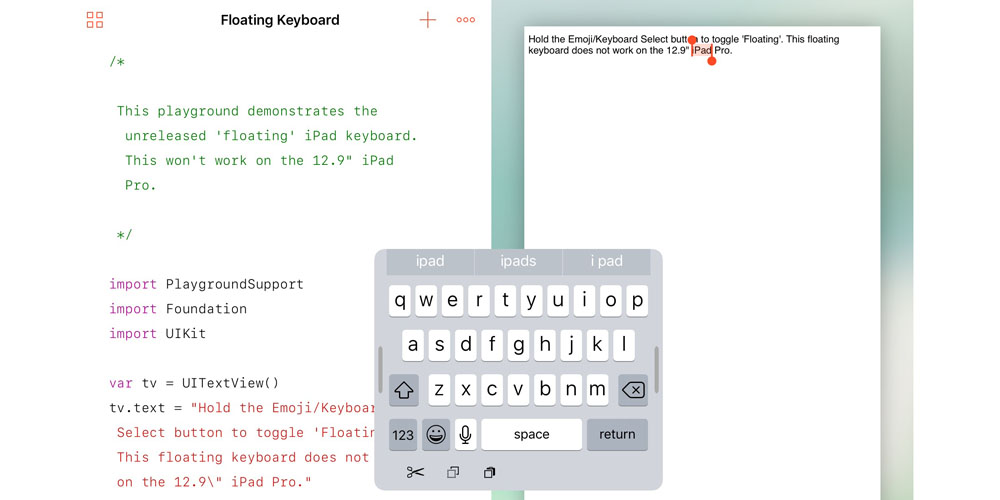 Back in January, developer Steven Troughton-Smith uncovered a new one-handed floating keyboard for iPad hidden inside an iOS 10.3 beta. He has now created a Swift Playground that allows you to play with the feature. It works with all iPads except the 12.9-inch iPad Pro.

In case you wanted to check out iOS 10’s unpublished ‘floating’ iPad keyboard, here’s a Swift Playground for you: https://t.co/nuUV8XsmeO

The feature works in a similar way to picture-in-picture, creating a keyboard that takes up less room than the standard one and can be moved around the screen to position it in a place where it doesn’t cover the content you’re typing …

The code for the keyboard is within the iOS update but not yet available to users. It has been speculated that Apple plans to make it available alongside new iPad models.

Though there has been more than one report suggesting that new iPads won’t be released until later in the year, the most recent speculation suggests April 4 as the most likely date.

We prepared a roundup last month on everything we’re expecting from the event, and you can catch up with the latest iPad-related news in our guide.

If you’re running an iOS 10.3 beta, you can download the Swift Playground code from Github. If you have the larger iPad Pro, Troughton-Smith notes that you can set your screen resolution to that of the 9.7” with Display Zoom in preferences to allow the feature to run.