Swift makes it into top 10 most popular programming languages; ‘expected not to rise further’ 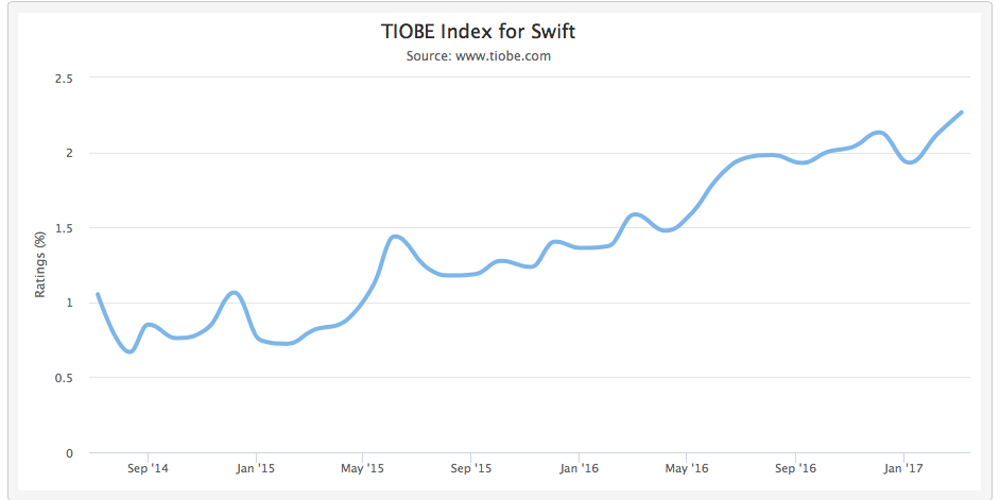 The Tiobe Index – which measures the popularity of programming languages on a monthly basis – reports that Apple’s Swift has made it into the top 10 for the first time. Tiobe says that ratings are based on three factors, using search engines to carry out the research.

The ratings are based on the number of skilled engineers world-wide, courses and third party vendors. Popular search engines such as Google, Bing, Yahoo!, Wikipedia, Amazon, YouTube and Baidu are used to calculate the ratings. It is important to note that the TIOBE index is not about the best programming language or the language in which most lines of code have been written.

While a relatively new programming language making it into the top 10 is an impressive achievement, Tiobe does not believe that it will climb any higher in the rankings …

The installed base of Objective-C code is quite large. New applications are written in Swift, whereas old apps that are written in Objective-C are not actively migrated to Swift. This is also what we observe at customer sites. Since Swift is mainly intended to write applications in Apple’s ecosystem, it is expected that it won’t rise much further.

The company says that the primary function of the index is to allow companies to make strategic decisions about which languages to use, and to enable software engineers to determine whether their skills are up to date.

Swift’s place in the ranking is no surprise. It’s popularity has been steadily growing since 2014, and it was named by freelance site Upwork as the second fastest-growing skill in Q4 of last year.

Swift creator Chris Lattner left Apple in January to join Tesla, though denied reports that he had been worn down by the clash between his role in promoting Swift to the wider developer community and Apple’s culture of secrecy.