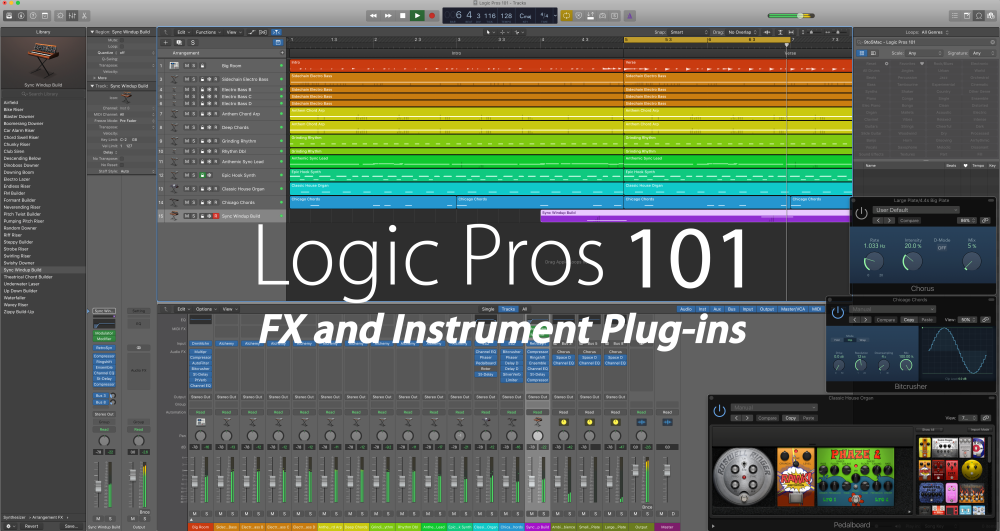 Now that we have a good understanding of the Workspace, recording basics, the various Channel Strip elements, as well as how to balance it all on the Mixer, this week on Logic Pros 101 it’s all about plug-ins.

As far as our purposes are concerned, a plug-in is essentially another name for all of the effects units and instruments available to us inside of Logic. LPX has loads of effects and instruments built-in as well as support for the massive array of third party options out there. We’ve already reviewed some this year including Substance, Exhale and Tim Exile’s 48-oscillator swarm synth SLOO.

Logic comes with a very respectable list of Instruments and Effects. From the powerful Alchemy synthesizer, or the lush string samples on EXS 24, to the plethora of audio effects units. It’s not necessary to drop hundreds (if not thousands) of dollars on third party options right from the get-go. We can break down the types of plug-ins most important to us in Logic right now into three separate categories:

Audio Effects: can be used on Audio Tracks, Software Instrument Tracks, Aux Tracks and more. They’re loaded up on the Effects slot on the Channel Strip.

MIDI Effects: are a real treat for Logic users. Previously buried in the depths of Logic’s wacky Environment pages, we can now load MIDI Effects into the MIDI FX slot on Software Instrument tracks. MIDI FX like the Arpeggiator and Chord Trigger can be very useful in song creation.

Software Instruments: are also considered plug-ins, the same way Effects are. But, as you know from earlier lessons, they are in fact complete virtual instruments that we can load into the Input slot on Software Instrument tracks. Logic Pro X comes packed with virtual synthesizers, drum machines, samplers, organ emulators and more.

Every plug-in inside Logic, Effect or Instrument, built-in or third party, is housed in a very similar plug-in window. This window is mainly made of up of a header that contains common options for almost all plug-ins in Logic, leaving the rest of the space for the plug-in’s unique controls. Some plugs also have additional parameters housed in slightly hidden area accessed via a small disclosure triangle in the bottom left-hand corner of the plug-in window.

Open: plug-ins will automatically open when you first load them on a track. Otherwise, simply click the middle of the desired Effect on the Channel Strip to open it.

Close a plug-in window: the small circle in the top left hand corner of the plug-in window header will temporarily close the window when you’re not using it.

Bypass: the large power-like button on the left will bypass that particular effect. In other words, it will be removed from the signal chain until you re-engage the button once again. Blue means it’s active and if it’s greyed out that means it is currently bypassed.

Previous/Next plug-in setting: these arrows allow us to browse through the various plug-in settings available on that particular Effect or Instrument.

Compare: is a simple toggle switch that allows us to quickly compare the current settings on a plug-in with its previous state. In other words, every time you make an adjustment the Compare button will light up allowing to quickly jump back to where you were before that adjustment was made. This can be very useful for quickly “A/B-ing” a particular adjustment.

Plug-in settings menu: this little pull-down menu houses many of the same features we have just covered above, along with a list of all the available plug-in settings for that Effect or Instrument. This is also where we can save/name/store our custom settings as well as access the Default Setting.

Remember to use the “Save As” option when saving your own settings to avoid writing over anything accidentally. And while you can “Save As Default…” at any time, it might be a good idea to leave the Default option alone for now so you can always jump back a clean slate using the “Recall Default” option.

View: from here we can change the overall size of the plug-in window to save some real estate or make things a little easier on the eyes.

Link/Unlink: once this button is engaged, every plug-in you open after that will use the same window, as opposed to each of them opening up in a new one.

Side Chain: this is somewhat of an advanced feature only found on some plug-ins, like compressors, and something we will touch on more in depth down the line.

You can also move an open plug-in anywhere on the screen. Simply click and hold on the dead space in the plug-in window header and then you can drag it anywhere you like. 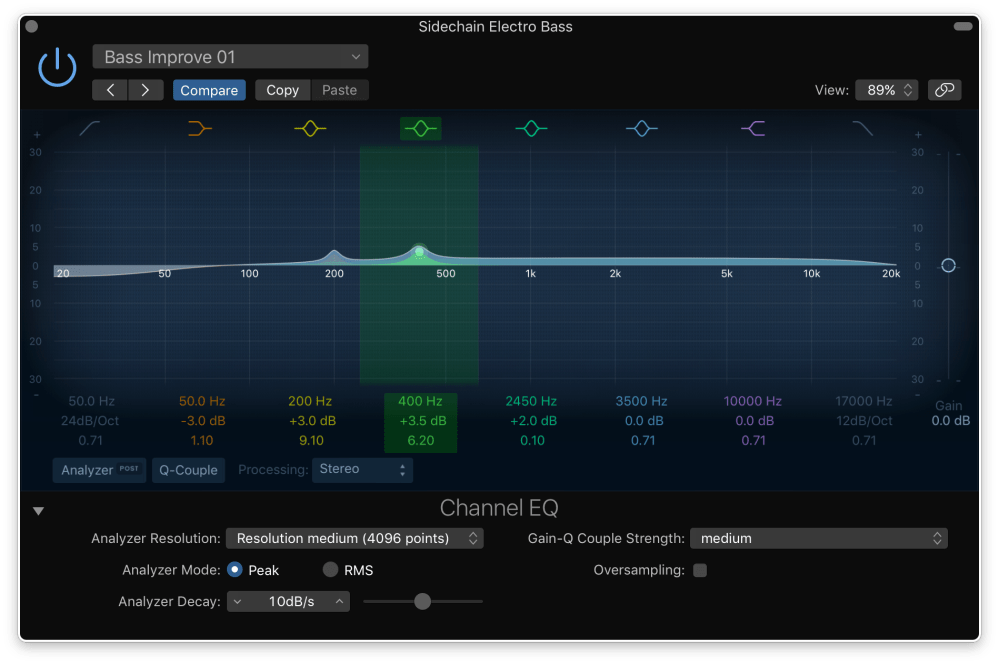 Every Software Instrument and Effect you come across is capable of a multitude of different sounds or audio processing possibilities depending on the way the parameters are set. For example, Logic’s Overdrive Audio Effect plug-in can go from adding subtle warmth to a vocal recording, all the way up to drastic levels of distortion and clipping, depending on the way you set it. The powerful Alchemy Software Instrument plug-in can make everything from whimsical pad sounds and ambient percussion rhythms, to downright disgusting bass lines and soaring lead sounds. 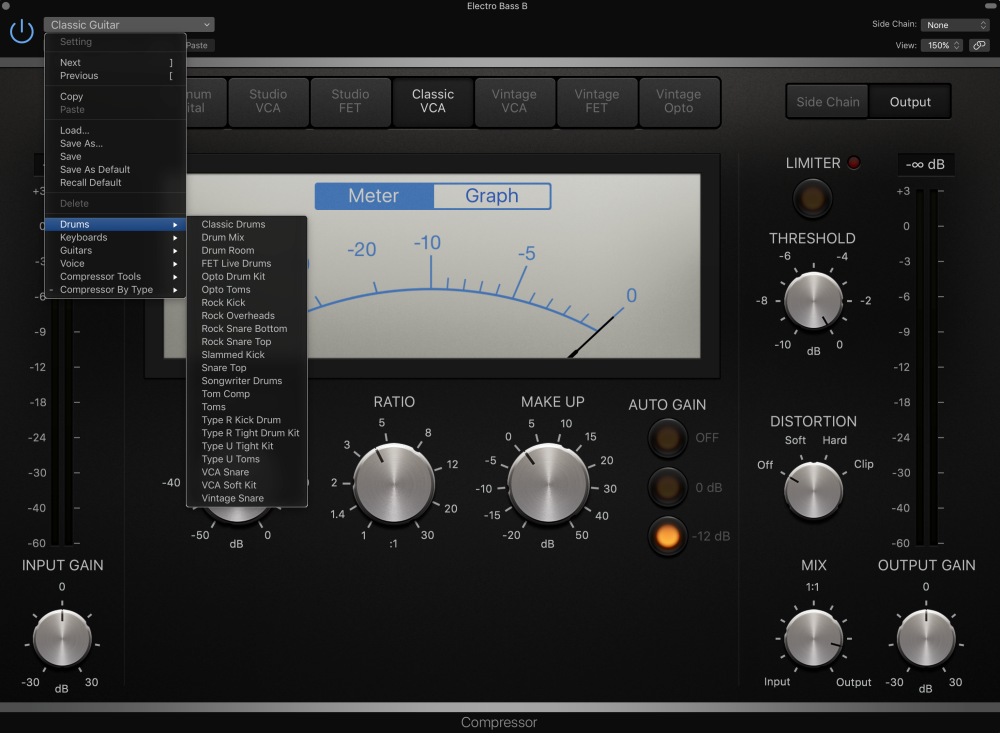 Commonly referred to as “presets,” Logic comes with loads of built-in plug-in settings for each Effect and Software Instrument, while also allowing you to create and save your own. You can also copy/paste/delete these Settings for use across any of your Logic projects and more. These are accessed via the plug-in settings menu as mentioned above (and seen in the image above). This extremely handy feature is found on just about every DAW out there and will soon become an invaluable asset to your creations whether you’re using the professionally created plug-in settings Logic ships with or your own favorites across multiple projects and more.

Needless to say every time we save and re-open a project, the plug-ins (Effects and Software instruments) we are using will always load up in the exact same state we left them in. 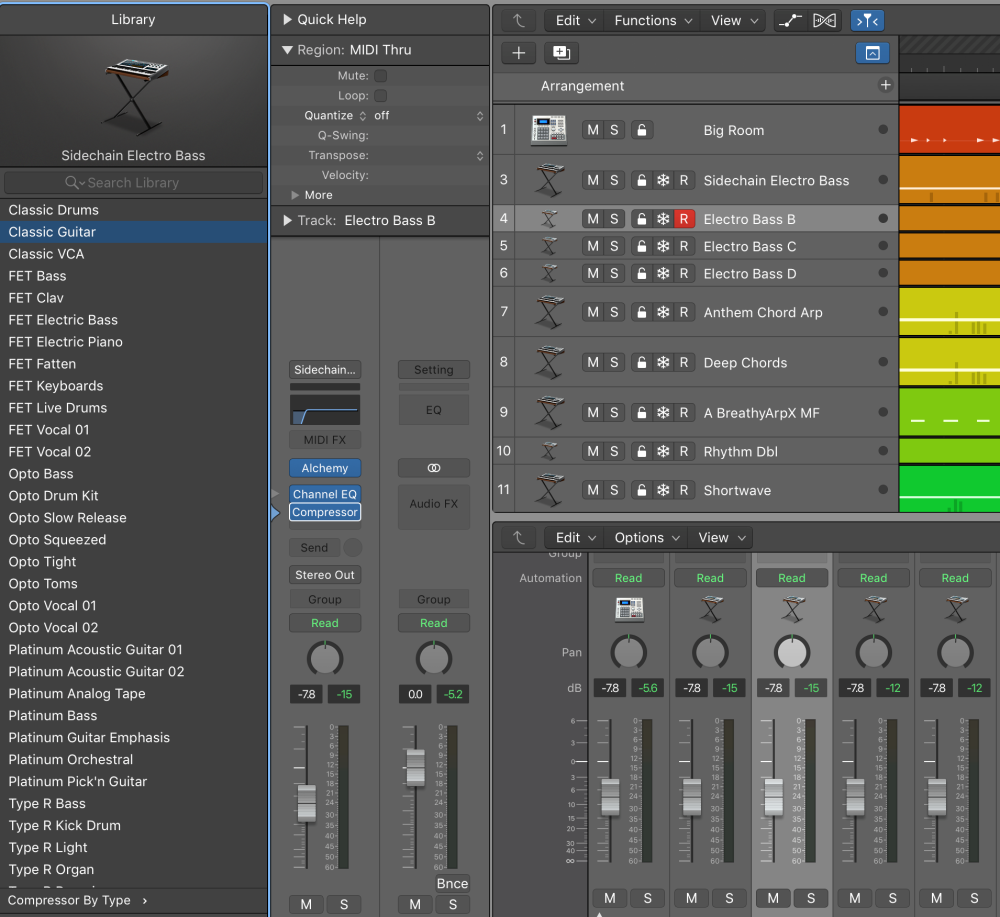 As we went over previously, when you select a particular track in the Tracks Area or the Mixer, its Channel Strip will appear in the Inspector. When you hover your mouse just to left of the plug-ins loaded up on that track, a small arrow will appear. If the Library is open, when you click this arrow the Library will show you all of the settings available for that plug-in including both the stock options and your previously saved custom settings. 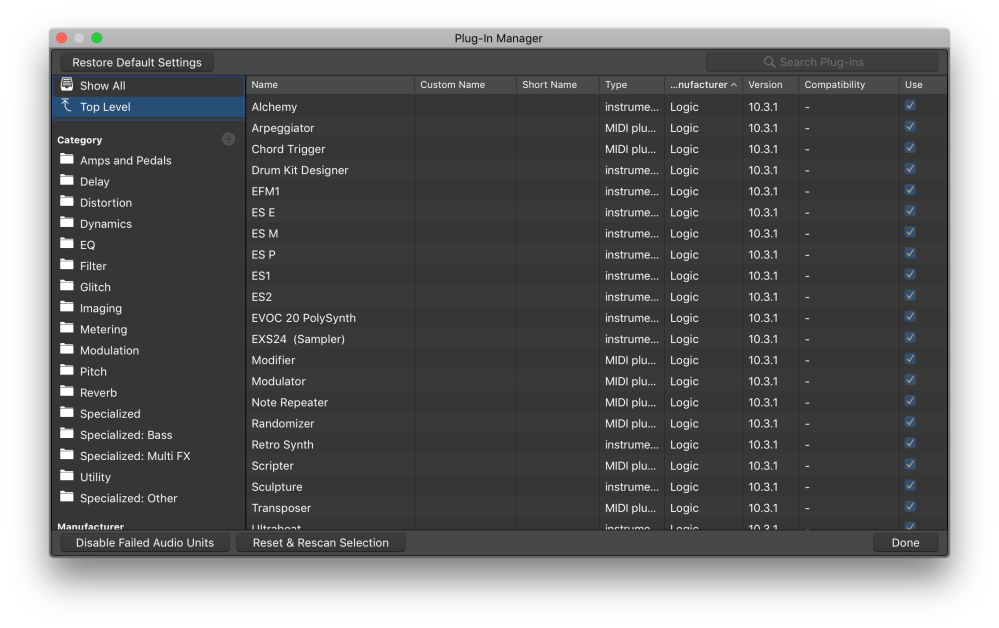 While at this point you likely won’t need to spend much time in here, it can be handy to be aware of in case something goes awry. The Plug-In Manager, much like the Sound Library Manager we covered in the very first chapter of Logic Pros 101, is simply a handy way to keep track of all your first and third party plug-ins inside of Logic. We can also now make custom folders to organize our plug-ins just the way we like from inside this window. But more on that later on.

1. Open a session or create some (at least 3) new tracks/recordings (using the steps from lessons 1, 2 and 3 if you need a refresher.)

2. Load up an Audio Effect on one of them. Now change the size of the plug-in window that automatically opens to 150% with the View pull-down menu.

4. Back on the Mixer, load up an Overdrive Audio Effect (found in the Distortion category in the Audio Effects slot pull-down menu) on another track, then repeat step 3 on this new plug-in. Now let’s try making some additional adjustments to the parameters on the effect itself until we are pleased with the result.

5. Now go up to the plug-in settings menu on this Overdrive plug-in and hit Save As… Name your new setting in the dialogue window and hit save.

Tip: while you can simply copy the setting over to the new track via holding option and dragging it over to another track. By saving your setting in this way you can then quickly use it other projects entirely.

6. Once again back on the Mixer, go to a third track and load up another instance of Overdrive. Now go up to the plug-in settings menu and and choose your newly created plug-in setting from the list.