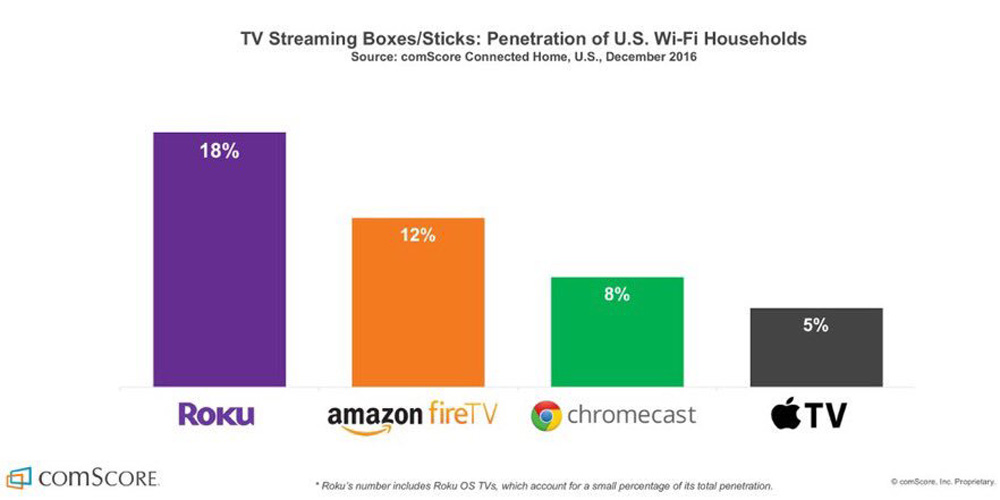 New data from comScore shows that 5% of all U.S. households with a WiFi connection now use Apple TV. Apple’s streaming TV box is the fourth most popular platform after Roku, Amazon’s fireTV and Google’s Chromecast.

comScore collected the data in December of last year.

The company notes that despite the growing use of video on demand services, live TV still dominates, accounting for 84% of all viewing against 14.9% time-shifted TV and just 1.1% video on demand. However, this is very much driven by demographics: Millennials and Gen X spend more time watching digital media than live TV.

In streaming services, Netflix is the unsurprising market leader at just under 40% penetration, followed by YouTube at around 27% and Amazon Video at a surprisingly high 17%. Hulu remains below 10%.

It was reported over the weekend that Apple hasn’t entirely abandoned its plans to sell a streaming TV bundle, but is currently focusing on a ‘premium TV bundle‘ comprising HBO, Showtime, and Starz.

But TV is itself declining in importance as people use other devices to stream video content. Smartphone usage has doubled since 2013, with tablet usage also up 26%. This has been in part driven by the fact that nearly one in eight U.S. Internet users are now mobile-only, with 18-24yo women the key demographic here, at 22%.

On desktops, Safari retained its market share of 10% across the second half of last year, while Internet Explorer and Firefox saw their share fall. Google Chrome is the clear market leader at 51% of the desktop browser market, up from 48% across the six-month period, while Edge is gaining on Safari, up from 6% to 8%.