Opinion: Is Microsoft leading Apple in PC innovation, or is it all gimmickry?

9to5Mac founder Seth Weintraub tweeted this morning a suggestion that Microsoft was hitting all the laptop checkboxes of late – and that Apple will not.

Will Apple respond? (No)

Others noted that Microsoft has held its third event this year, and second this month, while we still await the first Apple event of the year. Does this mean that Microsoft is leading the way in innovation at present, and Apple is being left behind – or is the Seattle-based company engaging in meaningless gimmickry … ?

The two companies clearly have fundamentally different philosophies when it comes to the laptop/tablet divide. Microsoft strongly believes that a single device can meet both needs, unveiling the latest Surface Pro model just today.

Apple’s position hasn’t changed since Steve Jobs used the analogy of a truck and a car. More and more people would only need a tablet – the car in this analogy – while those with more demanding needs would need a Mac – the truck.

Apple has for some time pushed the idea that the iPad can, for many, be a perfectly good alternative to a laptop, with Tim Cook particularly vocal on the topic.

The iPad Pro is a replacement for a notebook or a desktop for many, many people. They will start using it and conclude they no longer need to use anything else, other than their phones.

But the company has repeatedly ruled out the idea of a converged device, stating that it would be too compromised. In particular, the company has stuck by Steve’s line that a touchscreen computer is a terrible idea.

We’ve done tons of user testing on this, and it turns out it doesn’t work. Touch surfaces don’t want to be vertical. It gives great demo, but after a short period of time you start to fatigue, and after an extended period of time your arm wants to fall off. It doesn’t work, it’s ergonomically terrible. Touch surfaces want to be horizontal, hence pads.

Phil Schiller said that Apple had got as far as testing touchscreen MacBooks, and not changed its mind.

Our instincts were that it didn’t, but, what the heck, we could be wrong—so our teams worked on that for a number of times over the years. We’ve absolutely come away with the belief that it isn’t the right thing to do. Our instincts were correct.

I must admit that I questioned this the first time I saw the original Surface Pro. Superficially, this seemed to be a device I’d wanted for a long time, offering a highly portable laptop while at the same time allowing you to detach the keyboard to use it as a tablet.

Then I picked one up – and instantly changed my mind. As a laptop, it was reasonably portable; as a tablet, it was way, way too heavy. That hasn’t changed much through its various incarnations.

Additionally, I agree with Apple that a user interface designed for use with a mouse or trackpad is a terrible UI for a touch device, and vice-versa. You either end up with ridiculously small touch targets, or you make the entire UI like a child’s toy to make it suitable for touch.

As a device, then, the Surface is to me a gimmick rather than a decent machine. The tablet functionality is something that wows you in the store but you’ll rarely use in practice. Try using one as an ebook reader or to view movies and you’ll very quickly want an iPad instead.

But that doesn’t mean that I entirely disagree with Seth. I do think that there is room for compromise here. My most-used mobile device is my 9.7-inch iPad Pro, and that has a Brydge keyboard attached to it much of the time. It’s a tablet, but I use it as a laptop.

That effectively means that I have something of the Surface Pro experience – only in a far more usable form. I’m using what is, with the keyboard attached, a touchscreen laptop in all but name. And when I don’t need the keyboard, I end up with a thin, light tablet.

Even in laptop mode, there are times when a touch interface is useful. Granted it’s horrible for editing, compared to a trackpad. Selecting a sentence on an iPad is a frankly frustrating experience. But it’s not a black-and-white issue for me. There are times when a trackpad does the job best, and times when touch is more convenient. I would, ideally, like to have the choice of both when using a MacBook.

So yes, I agree with all of Apple’s reasons for the stance it takes, and I’ll take a MacBook Pro plus iPad Pro over a Surface Pro every time, but I do think there’s scope for a MacBook that supports a trackpad as a primary pointing device and a touchscreen as a secondary one. 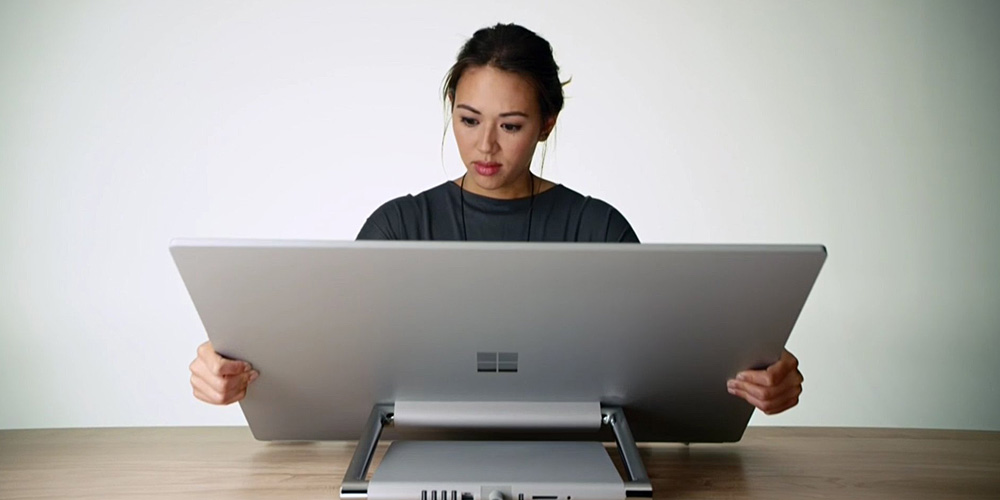 Then there’s the Surface Studio. Yes, it’s a niche product. Yes, it’s very expensive. No, it’s not for most people. But there’s no arguing with two things.

First, it’s a thing of beauty. It has been really well thought-through, and is as Apple-like in its styling and build quality as any device I’ve ever seen.

Second, for its target market – essentially anyone who spends much more time drawing than typing – it is a really great solution. For them, it’s not a gimmick, it’s an effective tool.

If that thing had an Apple logo on the back and ran macOS, it would set the graphics world alight.

And there’s one point I think few could dispute: iPad innovation seems to have badly stalled. Why on earth do we have a 12.9-inch iPad Pro with an icon density designed for a 4-inch iPhone? Seriously, why?

Why do we have iPad screen sizes clearly suitable for windowing where we’re limited to a clunky side-by-side layout and a handful of apps that support picture-in-picture?

In short, why hasn’t iPad software kept pace with the hardware? I get the superficial appeal of a single OS for everything from iPhone SE to 12.9-inch iPad Pro, but Apple needs to get over this. There is no reason at all why it can’t develop padOS to really let us use the iPad to its full potential.

And while I’m asking why-oh-why questions, there’s the laptop LTE issue Seth raised. I really, really wish Apple would include either a SIM slot or a virtual SIM in MacBooks.

Yes, I know I can use my iPhone as a hotspot, and I appreciate that for occasional use that’s a more affordable option than a separate plan. But it’s a clunky approach. If I want to do it for any length of time, it hammers my iPhone battery, so I end up connecting it with a cable to keep it charged.

For those who want to have an always-online Mac, and are willing to pay the data costs, an embedded SIM is a far, far better approach than using an iPhone as a hotspot. At least give us the choice, Apple.

So that’s my take: Microsoft isn’t leaving Apple behind. On the big question – separate platforms versus a converged device – Apple is right and Microsoft is wrong. But Microsoft is innovating in some ways that Apple isn’t, and the Cupertino company desperately needs to free the full potential of the iPad.

What’s your view? As always, please take our poll and share your thoughts in the comments.