Apple, Google, Facebook & others call on Texas not to pass ‘discriminatory’ bathroom bill 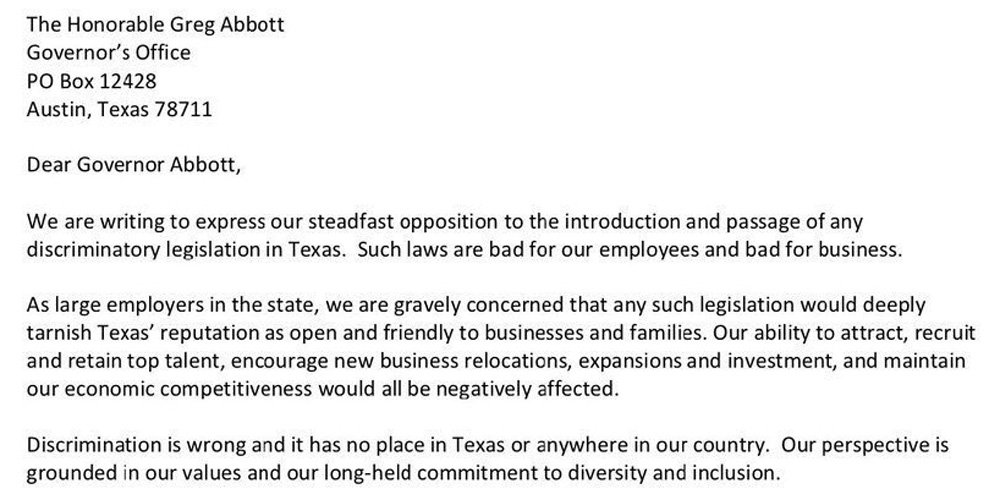 Tim Cook is one of 14 CEOs of major tech companies to sign an open letter calling on Texas not to pass the so-called ‘bathroom bill.’ The bill would require school students to use the restroom matching the gender on their birth certificate even if they currently identify as the opposite gender.

The CEOs told Texas governor Greg Abbott that the proposed legislation is discriminatory and bad for business.

As large employers in the state, we are gravely concerned that any such legislation would deeply tarnish Texas’ reputation as open and friendly to businesses and families. Our ability to attract, recruit and retain top talent, encourage new business relocations, expansions and investment, and maintain our economic competitiveness would all be negatively affected.

Discrimination is wrong and it has no place in Texas or anywhere in our country. Our perspective is grounded in our values and our long-held commitment to diversity and inclusion.

Apple first spoke out on the issue in February, opposing the Trump administration’s decision to devolve the decision on bathroom use to schools rather than the federal government. A week later, Apple lent its support to a lawsuit by a transgender student.

Apple has also opposed laws in Arkansas, Indiana and Mississippi that would allow businesses to discriminate against people based on their sexual orientation.