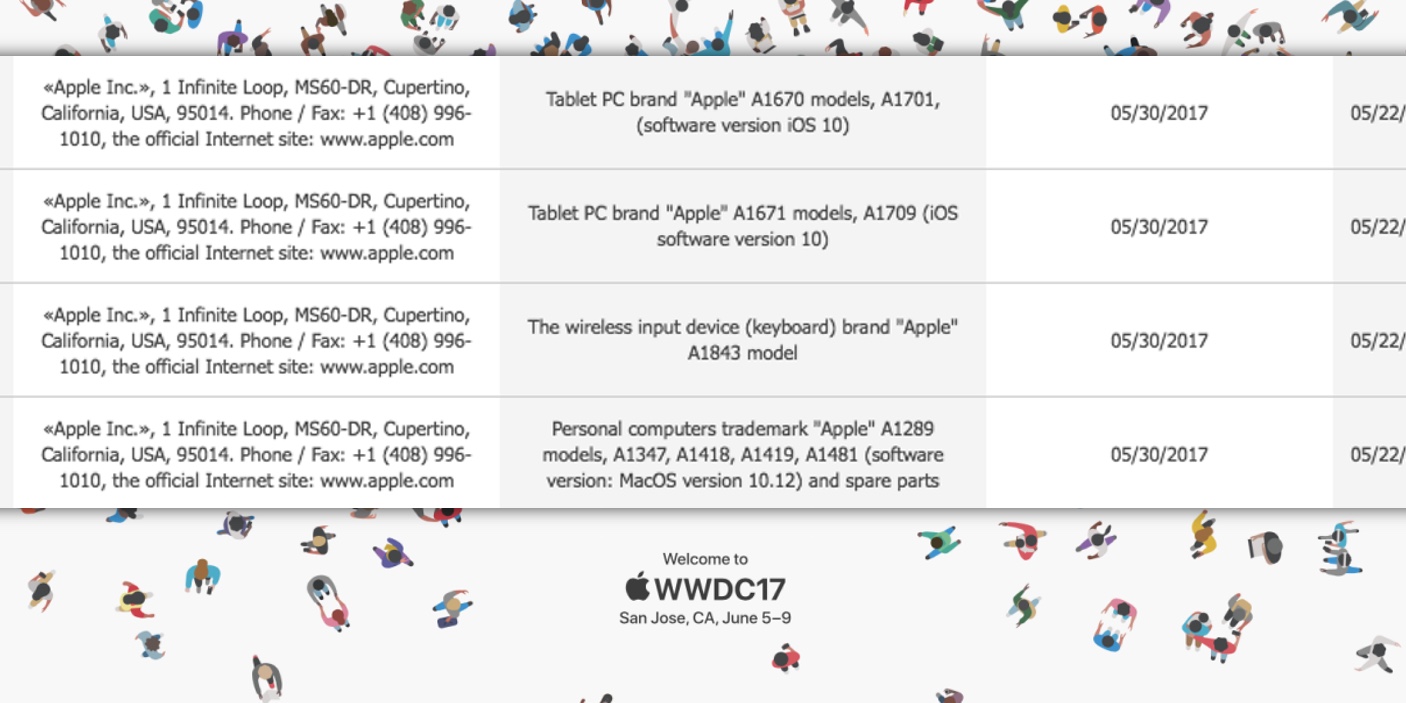 Several reports have indicated WWDC will introduce several new Apple hardware products alongside the headline software announcements like iOS 11 and macOS 10.13. Today, Eurasian regulator filings (which have proved reliable before) suggest that new iPad and MacBook (Pro?) models are on the way, as has been reported before.

The filings also suggest that a revision to the wireless Apple Magic Keyboard is imminent ….

As spotted by Consomac, the filings were published at the Eurasian Economic Commission registry overnight. The same registry has scooped the launch of new MacBook Pros, iPhones and AirPods in the past.

Four separate listings have appeared in the database spanning multiple models of Apple hardware. This includes new Mac laptops with model identifiers A1289, A1347, A1418, A1419 and A1481.

Update: The Mac model identifiers are actually all linked to existing products, from the trashcan Mac Pro to the iMac to the Mac mini. We aren’t sure whether this is an errant filing but either way we don’t think it’s a sign of a Mac Pro refresh — Apple strongly hinted that a new professional Mac was at least a year away. The iPad and keyboard identifiers are all new.

You can see the new filings in this screenshot (in English via Google Translate):

Guessing based off existing Apple patterns, the new 10.5-inch iPad Pro is probably represented by the A1701 and A1709 identifiers. It’s not clear what product the other two models are.

The new information from this leak is the final filing which is a new ‘wireless input device (keyboard)’ from Apple. This carries the A1843 model number and is seemingly a revision to the current Magic Keyboard. Apple last updated the keyboard in late 2015 with the addition of internal battery recharging using the Lightning connector. Details about the changes in the new keyboard are not known.

Apple’s WWDC keynote kicks off on June 5 at 10 AM PT. As well as the new hardware, Apple will unveil the next major versions of its software platforms; iOS 11, macOS 10.13, watchOS 4 and tvOS 11. We’ll bring full coverage of all the announcements so stay tuned.