Recently we reviewed the new iOS version of Unique from Sugar-Bytes. The company is among our favorite third-party instrument and effect makers. We have personally been purchasing and using its gear for many years with products like Effectrix and Artillery appearing regularly in our daily production setups. And now, after spending some time with its latest matrix multi-effects processing unit, it’s time to dive into the world of Looperator…

Looperator is loaded with a countless number of effects including everything from reverbs, delays and time stretch/talkbox filters, to loopers, vinyl/tape FX, audio envelopes, ring modulators, and well, pretty much anything you can think of. Although at its core, it is a essentially a 16-step sample slicer, so these aren’t your typical plug-in effect chains.

It runs like any typical audio plug-in. It will analyze the incoming audio of any track(s) and then allow you to apply a combination of the aforementioned effects across a timeline of sorts. In other words we can have a filter and some reverb on the first beat of a track or pattern, followed by some loop effects on the next steps, and then distortion on the next and a look how good I can DJ vinyl stop on the last. It’s basically glitch music maker heaven in one plug-in, but don’t be fooled by the flashy sounds here, the thing is amazing for animating emotional pads or even adding interesting counter rhythms on drum loops and so much more. 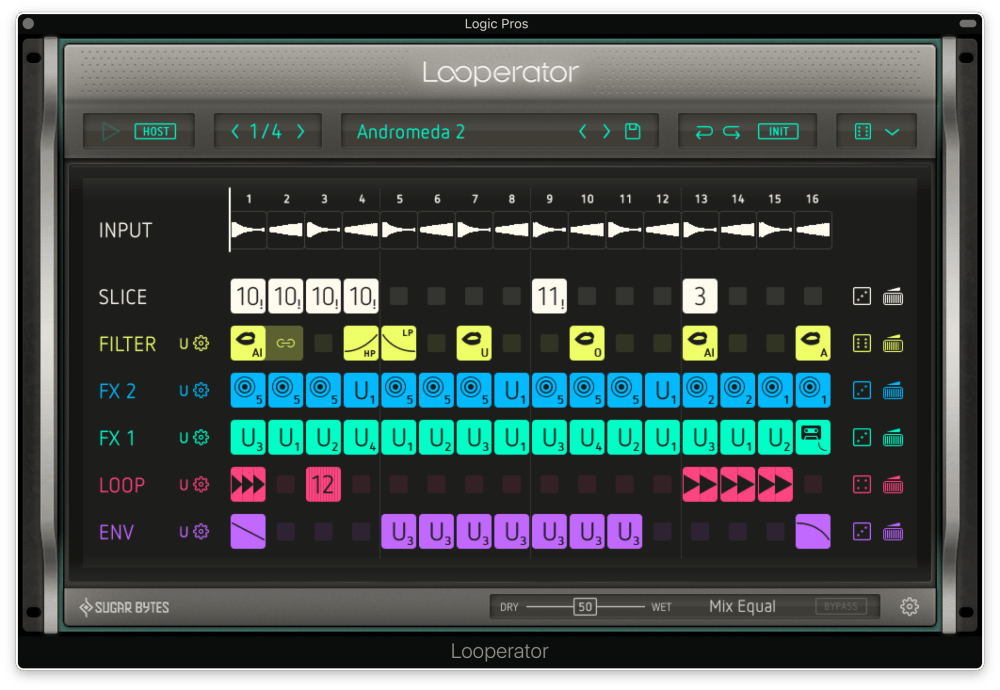 It uses a simple matrix system to apply the various effects. We can clearly see the incoming source audio’s waveform along the top of the UI as well as each of the audio manipulation categories available to us along the left:

The Slice option allows us to rearrange the steps of the analyzed audio. In other words, Looperator will slice your track into 16 steps (any resolution of your choice), and then we can choose to completely rearrange the playback order of those steps by placing numerical values (1-16) on the timeline that represent each step. Awesome.

From there we have all of the various effects available to us separated into 5 categories: Loop, Envelope, FX slot 1, FX slot 2 and Filter. Each of these categories has 20 different preset effects than can be dropped on to the timeline with a single click. The Loop category offers up different ways to create micro loops on each step of your track. The amplitude Envelope has a number of interesting audio shaping possibilities and the Filter ranges from your basic Low-Pass/High-Pass situation all the way to various vowel and time stretch like sounds. As for the two FX slots, you’ll find reverbs, delays, vinyl sounds, distortion and much more. But there are also 4 user modules where we can create custom designed presets for placement on the timeline just the same. In this case there 5 different parameters (for each category) to tinker with when design your own presets.

We can also place a random step anywhere on the grid to let the virtual music gods decide what happens. For that matter, you can randomize the entire plug-in with a single click. Not my cup of tea, but it can be fun and effective when it comes to needing some inspiration.

You simply single click on any of the steps on the grid to apply one of the 20 presets or 4 user settings (or a random step), and right click to delete them. You can click and drag to copy a particular effect to consecutive steps or even click and drag while holding shift to extend the range of the effects to multiple steps. Simply wave your mouse over any particular step and then scroll up and down to browse through the various options.

Each of the audio manipulation categories along the left are processed from top-to-bottom, and we can freely drag them around to change the order. This is a really nice touch as it allows us to get much more specific about the way the audio is treated. Looperator has its very own undo/redo system built-in to the UI, which, believe me, for a plug-in of this nature is extremely handy. 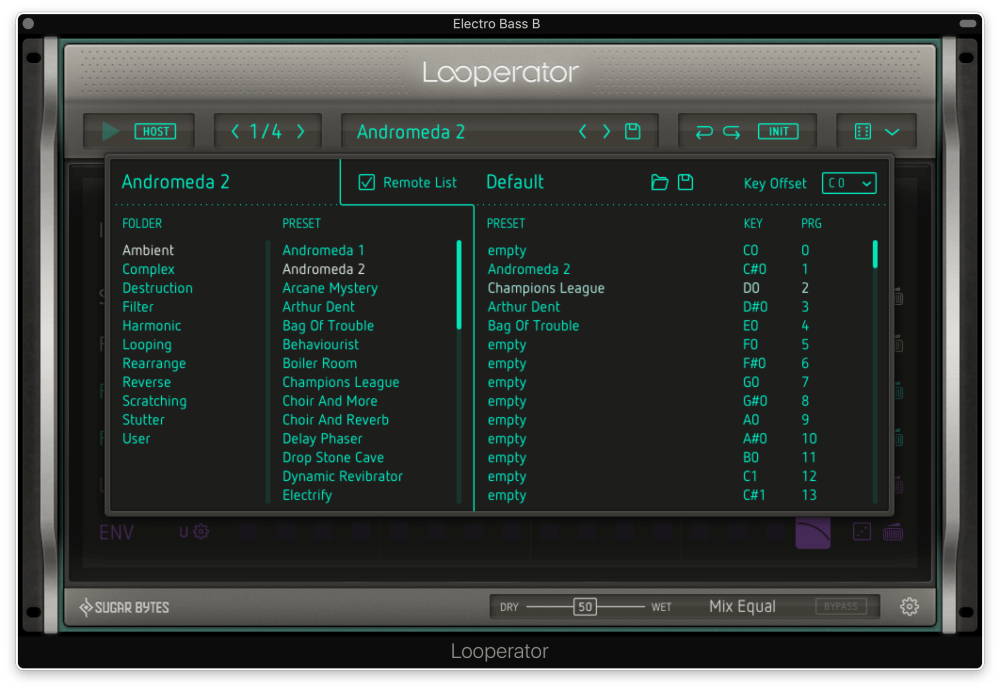 We can also run the plug-in either synced to our host (generally the way it has been described in this review) or trigger entire patterns and presets via MIDI notes. There is a great little drag and drop feature where we can drop an entire patches from the factory/user list and drop them onto various notes of our keyboard to be triggered that way. This can be great for DJ setups or even across an entire mix/group of tracks. Sounds like the beginnings of a future in-depth Logic Pros tutorial to me.

All-in-all, the color-coded user interface is well implemented here. It is intuitive and a little bit easier on the eyes than the company’s other multi-effects looper unit, Effectrix. The ability to see the waveform of the incoming audio source, and where each bit lands on the matrix directly in-line with each the FX is fantastic.

As for the effects themselves. They are great, factory presets included. With 20 of them in each category and 4 users settings each, that 120+ different settings that can all be meticulously placed by hand on a step-by-step (beat-by-beat) basis. Im in, very in. 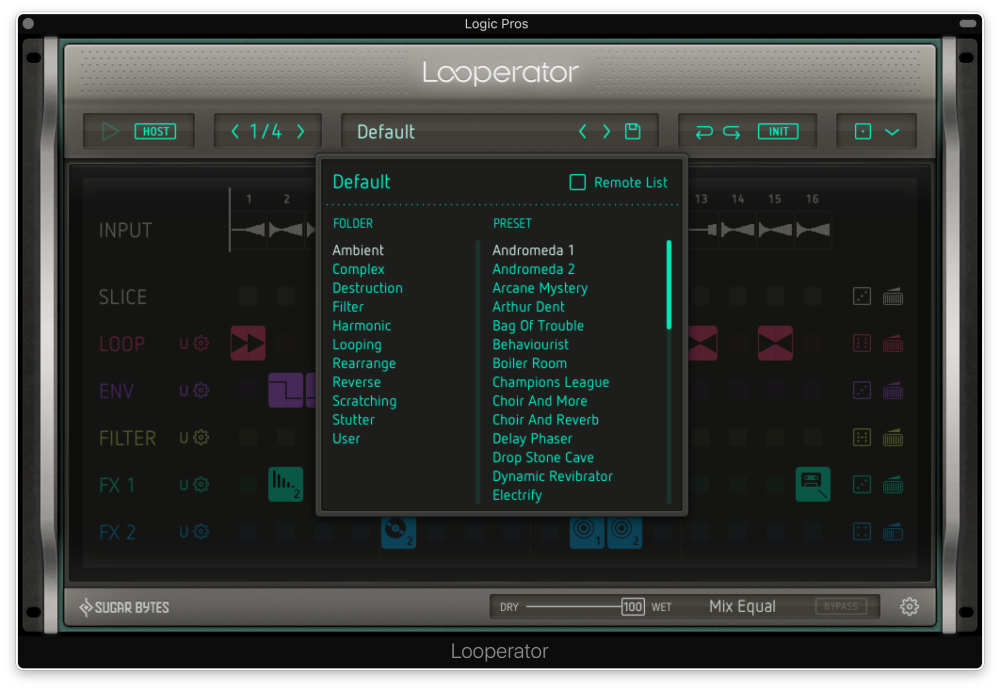 Its hard to even find a flaw here for me personally. I guess some might suggest it is generally more tailored towards dance and glitchy music, but I would have to disagree. It is great for that kind of music, but the threshold of its sonic limitations are directly tied to the creativity of the user. I can easily see it being an absolute dream for creating ambient textures, interesting vocal motifs, across the whole mix for transitions and even on highly dynamic drum/percussion patterns, in just about any kind of music.

Clearly the $119 price tag is well worth it in my eyes. But you can give it a try before dropping the cash with the demo version available on the Sugar-Bytes site. It is compatible with Logic Pro X and all major DAWs (or standalone).

ICYMI: Here’s all of the biggest music production news and updates from this week and here are our picks the best MIDI keyboards for Mac and Logic Pro 2017 Edition. Last week we covered how to send MIDI from Logic Pro X to iOS synths wirelessly.