With iOS 11 and macOS High Sierra unveiled this week at Apple’s Worldwide Developers Conference, the company is introducing a handful of new Accessibility features that will improve the experience for users with disabilities. Head below for a tour of the new features coming this fall…

Apple is also making sure Accessibility users will be able to benefit from new Type to Siri and Drag and Drop features arriving in iOS 11 and macOS High Sierra. Below we take a look at all these features and more coming to Apple’s new operating systems.

A new Accessibility Keyboard for macOS High Sierra brings an onscreen keyboard that has been designed specifically with accessibility users in mind. The new keyboard can be accessed from the Accessibility pane in System Preferences (as pictured above). It includes a system to add fully customizable keys with scripting actions so users can have a single button perform tasks such as opening apps, entering text, pressing keys, or initiating things like system events, typing suggestions, Dwell and AppleScripts. 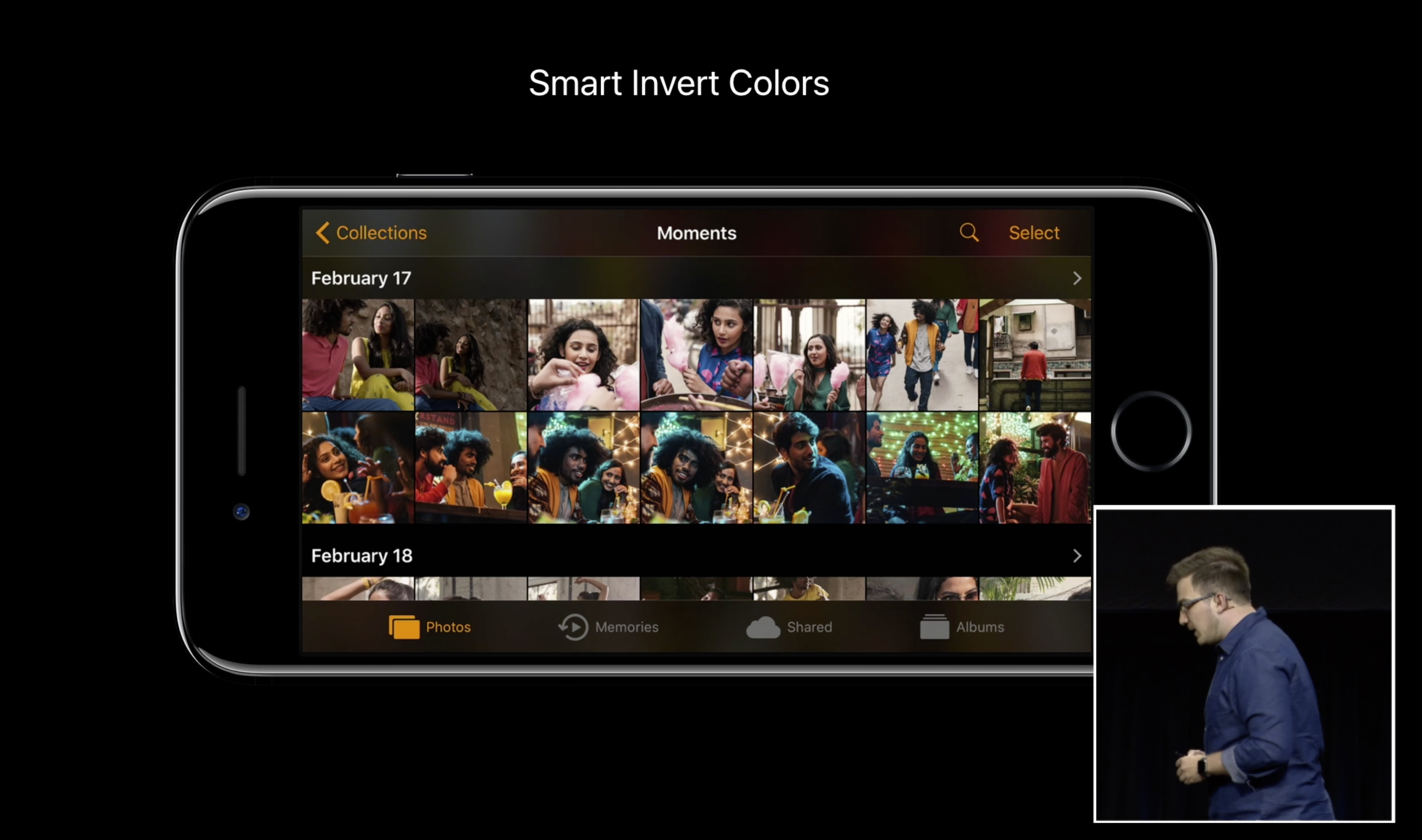 Apple’s old invert colors option for accessibility will still be available going forward, but it’s now called “classic” as it introduces a new “Smart Invert Colors” mode. The new option doesn’t invert colors of content like graphics and images so you can continue to see content in its original form with all the same benefits of inverted colors for the rest of the UI.

For example, the wallpaper and app icons on the Home screen don’t get inverted, and in the Photos app you’ll get the original photo content with the rest of the UI inverted.

For apps like clock that already have a dark UI, Smart Invert Colors will know not to change anything. It’s also maybe the closest thing we’ve had to a dark mode for iOS. 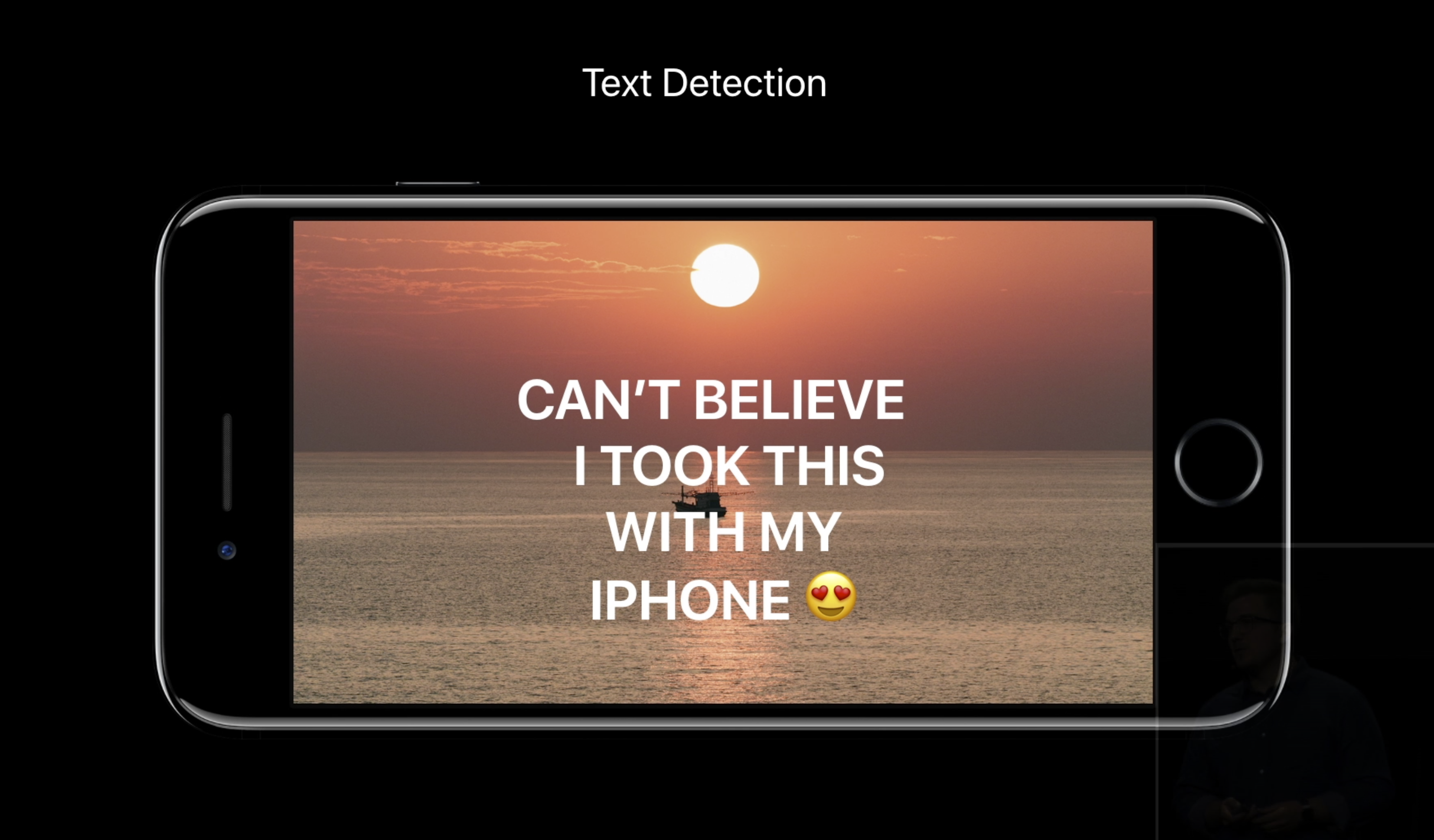 One update for accessibility coming to both iOS 11 and macOS High Sierra is improvement to text detection in images for users with vision impairments. To accomplish this, Apple’s newest software will automatically do some basic text detection on images, allowing it to detect the text and speak it aloud to the user with a voiceover. 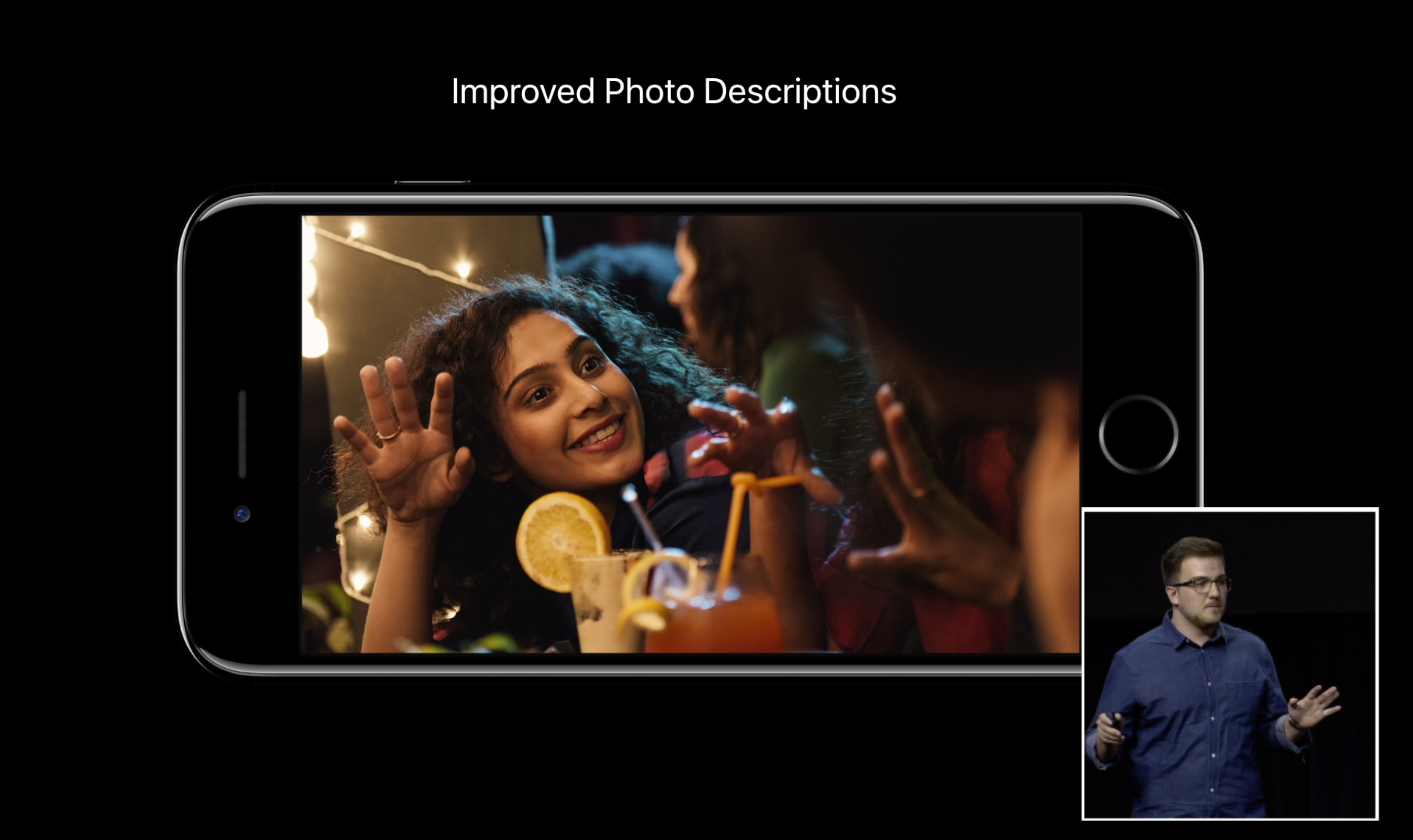 Improved photo descriptions will similarly do basic analysis to find out what’s in an image and describe it aloud to the user. Apple explained that the software looks for various key characteristics in the images such as the number of faces, expressions, overall scene, blurriness and brightness level. For the image pictured above, VoiceOver’s audible description would be, “1 face, 1 smiling, nightclub, blurry, bright.”

Apple showed off some new system wide enhancements arriving with iOS 11 for users that have the largest text options selected. There will also be new APIs that allow developers to adopt the improved larger text experience in their own apps with Dynamic Type. 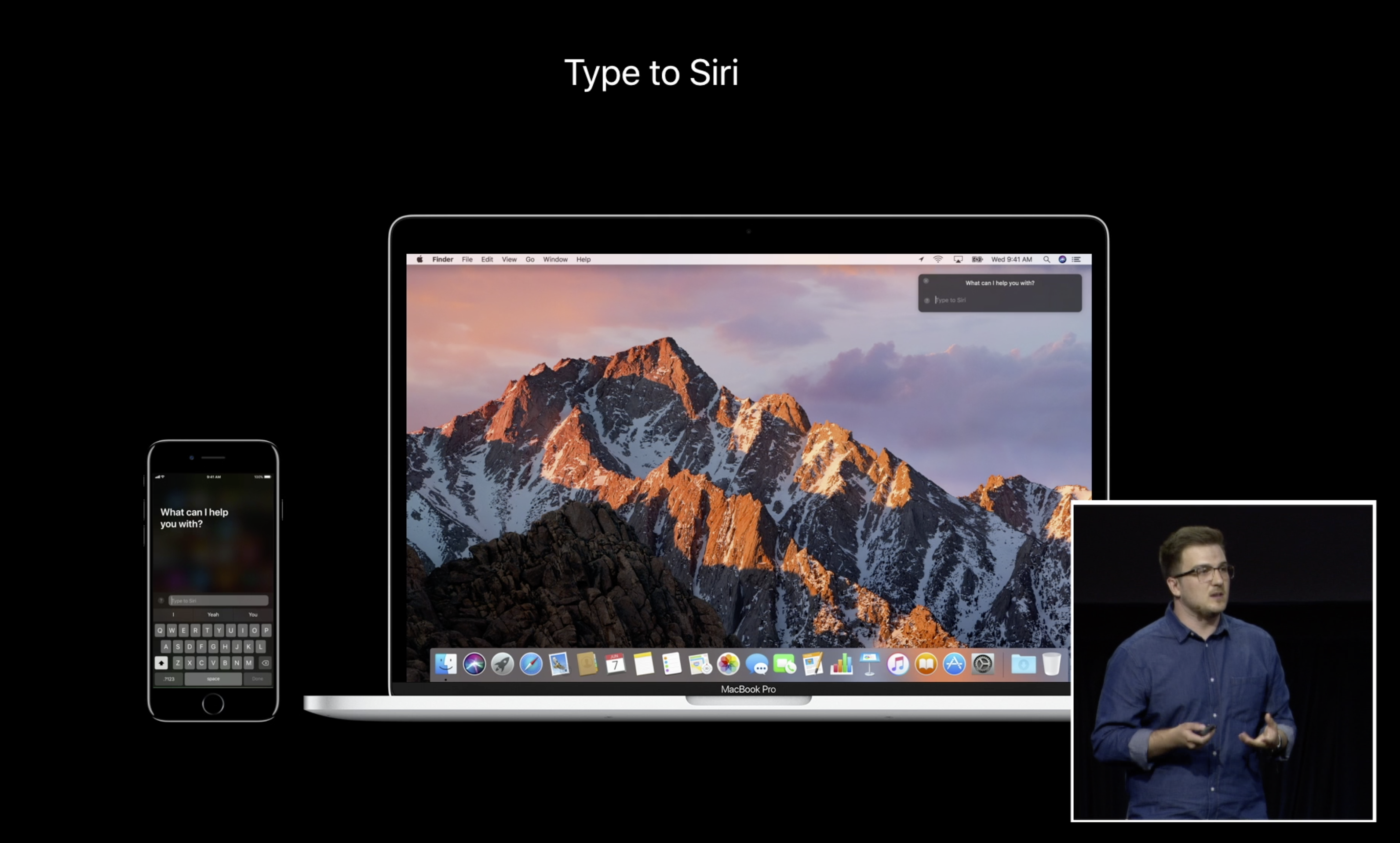 Type to Siri isn’t specifically billed as an Accessibility feature for iOS 11 and macOS Sierra, but during its WWDC sessions with developers Apple made a point of noting that the ability to interact with Siri using text input will make it available to many more users that have issues with voice control. 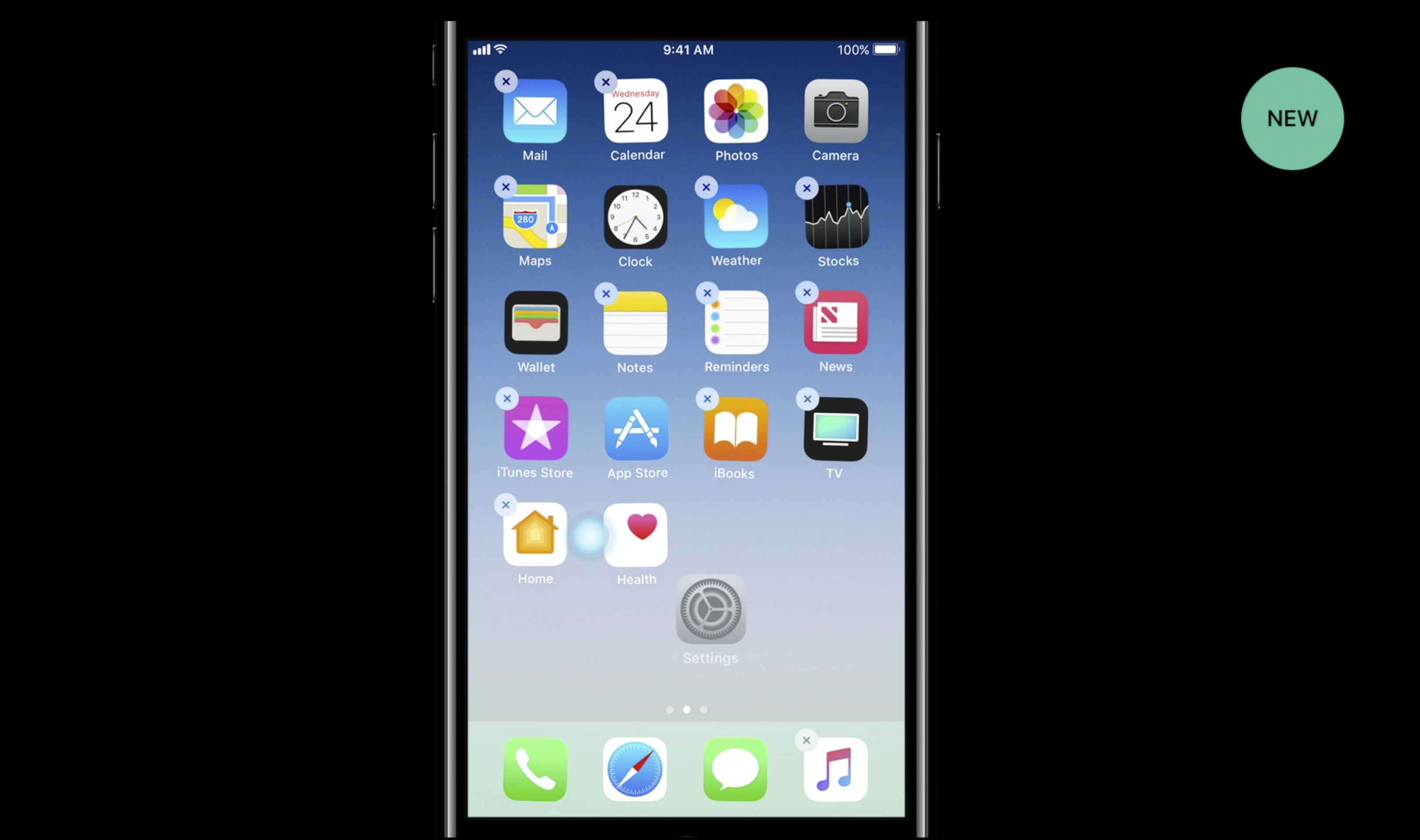 Drag and drop is a highlight feature of iOS 11, especially for iPad users, and users of Accessibility features will also be able to benefit. Apple is introducing a new API to enable drag and drop with VoiceOver support, which means visually impaired users will be able to take advantage of drag and drop features when developers implement it.