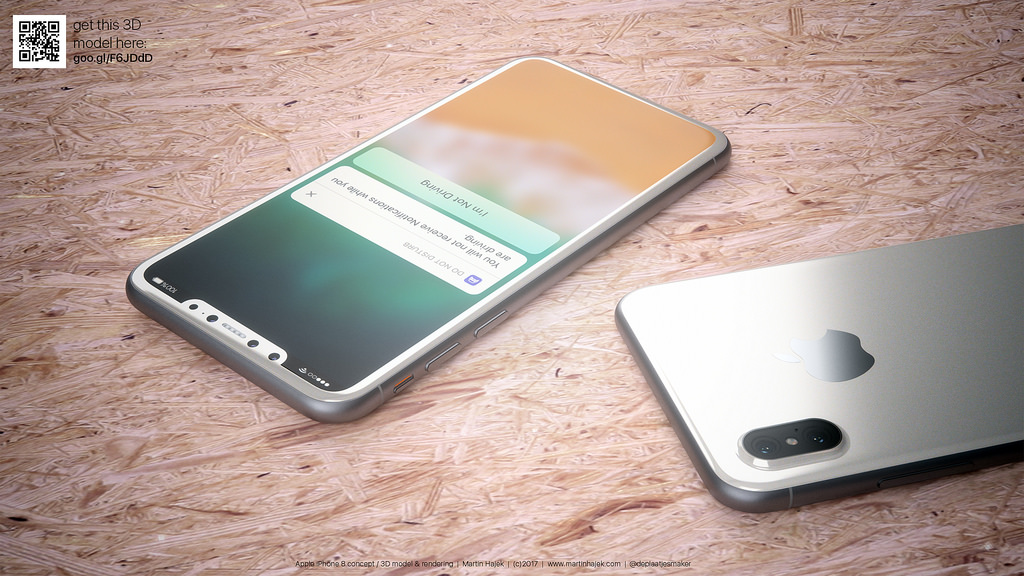 While there has certainly been no shortage of iPhone 8 leaks, renders, and dummy units, one thing we haven’t seen very much of is the supposed iPhone 8 in white. Designer Martin Hajek, however, is back with his own iPhone 8 renders in white + silver, showcasing the nearly bezel-less design, glass design, and more…

As you can see in the images above and below, these renders imagine a white iPhone 8 with a glass back and silver stainless steel edges around the sides. On the front, there’s a cutout for the FaceTime camera and ear speaker, with the display wrapping around either side. There’s of course no Home button and Touch ID appears to be implemented in the screen.

Hajek has also shared renders of the iPhone 8 in black. One notable thing here is just how seamless the front of the device is in black. The cutout for the camera and speaker is nearly unnoticeable because of the deep blacks of the OLED display, whereas the cutout looks a bit out of place on the white model.

The renders also show the device running iOS 11, showcasing features such as Do Not Disturb while driving. We’ve seen other renders in the past imagine the iPhone 8 and iOS 11 combination, while we’ve also outlined some of the changes in iOS that perhaps hint at the iPhone 8’s design and feature.

It’s widely believed that this is the design Apple has chosen for the iPhone 8, although nothing is official until this fall when the company officially unveils the device. We’ve seen alleged other prototype designs leak over recent months, some of which feature rear Touch ID.

It’s certainly interesting to see the iPhone 8’s design in white, especially with the glass back and chrome edges. Personally, I’m partial to the black model because of how seamless and smooth the front camera cutout looks.

What do you think of these renders? As of now, do you prefer the supposed iPhone 8 design in white or black? Are there other colors that you want to see? Let us know your thoughts down in the comments and check out more renders below.