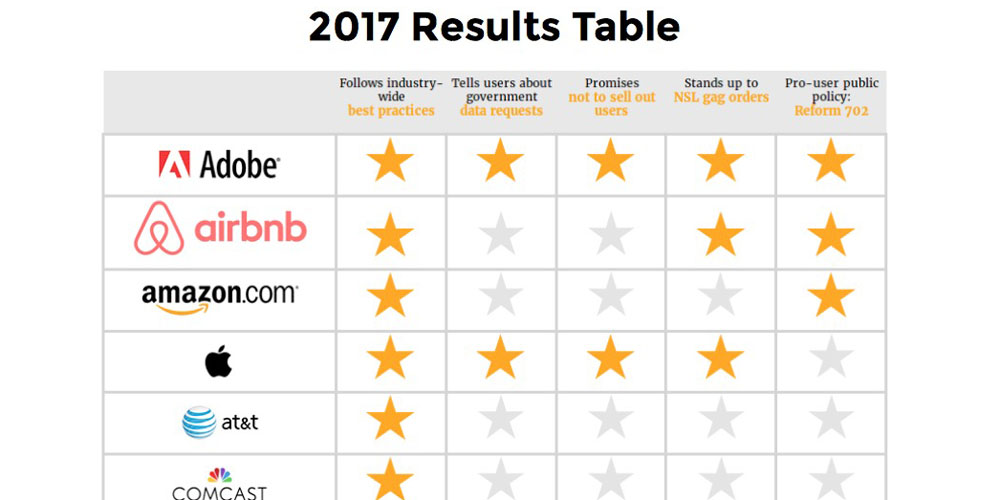 The latest Electronic Frontier Foundation report on how tech companies handle government data requests has given Apple four out of a possible five stars. The company previously earned five stars before the EFF added a new requirement to this year’s scorecard.

The report, titled Who Has Your Back, gives Apple top marks in all but one area …

This is Apple’s sixth year in Who Has Your Back, and it has adopted a number of industry best practices, including publishing a transparency report, requiring a warrant for content, and publishing its guidelines for law enforcement requests. Apple promises to inform users before disclosing their data to the government, has a published policy of requesting judicial review of all National Security Letters, and explicitly states that third parties are forbidden from allowing Apple user data to be used for surveillance purposes.

The report highlights the importance of automatically requesting a judicial review of all National Security Letters. These require companies to hand over data without being able to reveal that they have done so. The EFF quotes from Apple’s information requests page.

The one star denied to the company is for what the EFF calls a ‘pro-user public policy. By this, it means supporting the reform of Section 702, the law that allows the NSA to conduct mass surveillance of American Citizens.

We are awarding credit to companies that support reforming Section 702 in order to reduce the collection of information on innocent people. Public positions in support of allowing this provision of law to expire completely will also receive credit, as this would also have the effect of reducing the surveillance of innocent people […]

Apple has not publicly called for reforms to Section 702 to curtail the surveillance of innocent people.

Only eight companies were awarded five stars, among them Adobe, Dropbox and WordPress. The decision to dock companies one star for failing to publicly call for repeal or reform Section 702 despite complying with all best-practice recommendations is likely to prove a controversial one. Is it unfair, or is it reasonable to expect companies like Apple to make their voice heard? Let us know your thoughts in the comments.

The EFF strongly supported Apple’s stand against the FBI in the San Bernardino shooting case.