Samsung’s quarterly profits (probably) beat AAPL for the first time, but not in mobile 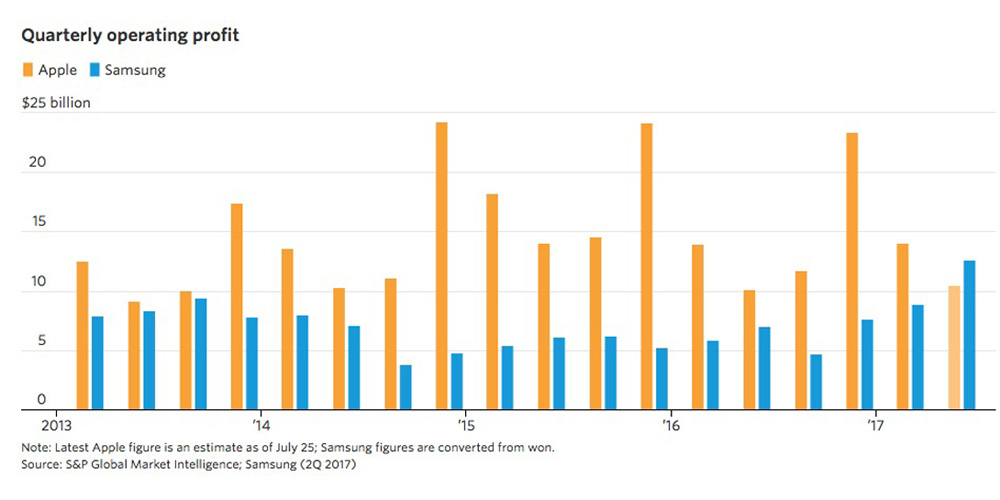 Samsung has just reported its highest quarterly profits of all time, hitting $12.65B in the quarter ending in June – putting it ahead of Apple’s projected profits of around $10.54B.

Samsung shares also out-performed AAPL in the last twelve months, gaining 63% against 59% for the Cupertino company …

These were two of the headline numbers from a series of infographics in the WSJ, but a deeper dive into the numbers presents a slightly more nuanced story.

The June quarter is always a quiet one for Apple, most awaiting the launch of the new iPhone – all the more so this year, with high expectations of the iPhone 8. But it’s not even a direct comparison in any case: Samsung’s mobile business accounted for only 29% of its profits.

Indeed, Apple has been a significant contributor to Samsung’s two largest divisions – displays, at 12%, and chips, at 57%. Samsung is expected to make all of the OLED displays for the iPhone 8, as well as some of the A-series processors.

America knows Samsung by its consumer brands. But the company owes its fortunes to its less visible but increasingly dominant position in the memory chips and screens from which smartphones are built. Its dominance in those components is so pronounced that rivals like Apple have few other places to turn. Components now represent about 70% of the company’s overall profits.

Samsung currently holds an incredible 97% share of the smartphone-sized OLED market, and some 58% of DRAM sales. In fact, Samsung’s chip business is now so large that some analysts are expecting it to overtake Intel by the end of the year to become the world’s largest chipmaker.

But even if total profits are the basis for comparison, Samsung’s lead is certain to be short-lived. Total 2017 profit projections put Samsung in fourth place, behind Apple at #1, Industrial and Commercial Bank of China at #2 and China Construction Bank in third place.