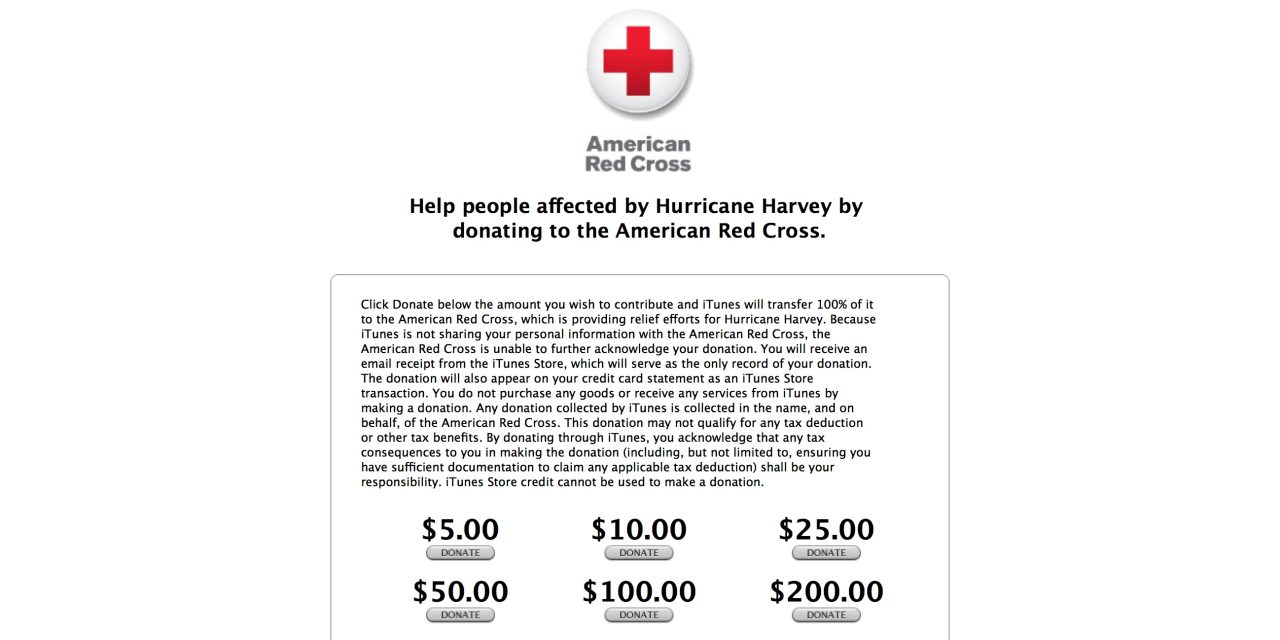 Apple this weekend has started accepting donations via the iTunes Store for Hurricane Harvey relief efforts. CEO Tim Cook announced the efforts in a post on Twitter this morning as damage is assessed around areas of Texas where Hurricane Harvey made landfall.

Apple is partnering with the American Red Cross to allow iTunes users to easily donate to relief efforts. Customers can donate in $5, $10, $25, $50, $100, and $200 denominations and Apple will transfer 100 percent of the proceeds to the Red Cross.

Hurricane Harvey made landfall late Friday evening as a category 4 storm. Shortly after making landfall, the system was downgraded to a tropical storm, but it still wrecked havoc among much of Texas. Thus far, Harvey has caused three fatalities while more than 1,000 people were rescued last night due to flooding and high water.

While Harvey may soon weaken to a tropical depression, it’s currently stalled over the region and continues to pound the area with catastrophic wind and rain, which officials believe will last for “four to five days” and cause “catastrophic flooding.”

This isn’t the first time Apple has opened up donations in partnership with the American Red Cross via the iTunes Store. In past years, Apple has opened its donation page for earthquake relief in Japan and Ecuador, typhoon relief in the Philippines, and for the Mediterranean refugee crisis. Most recently, Apple also started accepting donations for the Southern Poverty Law Center through iTunes.

Below is Tim Cook’s tweet on Hurricane Harvey relief efforts, while you can donate via this link.

Prayers for Texas and all those affected by #HurricaneHarvey. Join us in the relief effort by donating: https://t.co/QLBMFOjaDG