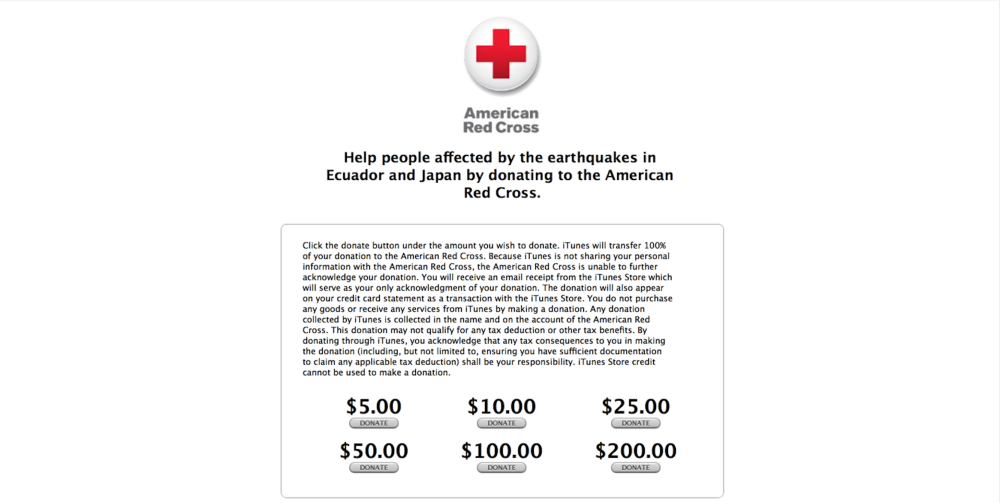 Following the devastating earthquakes that have hit Japan and Ecuador in recent days, Apple has opened a donations page in iTunes to support relief efforts in both areas. The company, as it has done in the past, is partnering with the American Red Cross for the donations and is accepting donations in $5, $10, $25, $50, $100, and $200 denominations.

The donations are being accepted via iTunes and the App Store on both iOS devices and computers. Apple is promoting the Red Cross partnership with links on the main pages for both stores. On the donation page itself, Apple specifies that 100 percent of the donation goes directly to the American Red Cross and that Apple does not take any portion. Furthermore, Apple notes that the only record you will receive for this donation is a receipt via email.

As you have probably seen, a trio of devastating earthquakes hit Ecuador and Japan in the past week. Last Thursday, Japan’s Kyushu region suffered a 6.2 magnitude earthquake. Then, the next day the same area was hit by a 7.3 magnitude quake. CBS reports 48 people have been killed by the two quakes and subsequent aftershocks. Additionally, Ecuador was hit by a 7.8 magnitude earthquake on Saturday. CNN reports that at least 570 are dead following this earthquake, while an additional 155 are still missing.

This isn’t the first time Apple has partnered with the American Red Cross to raise money for areas affected by natural disasters. Last September the company started accepting donations via the App Store and iTunes to help the Mediterranean refugee crisis. And in April it helped raise money for Nepal following an earthquake; after the tragic earthquakes in Japan in 2011, it did the same thing.

Tim Cook took to Twitter over the weekend to express sympathies for those affected by the earthquakes:

Our hearts and thoughts are with everyone affected by terrifying earthquakes in recent days. #FuerzaEcuador #prayforkyushu #prayformyanmar

If you would like to donate to the American Red Cross via Apple, you can do so here.