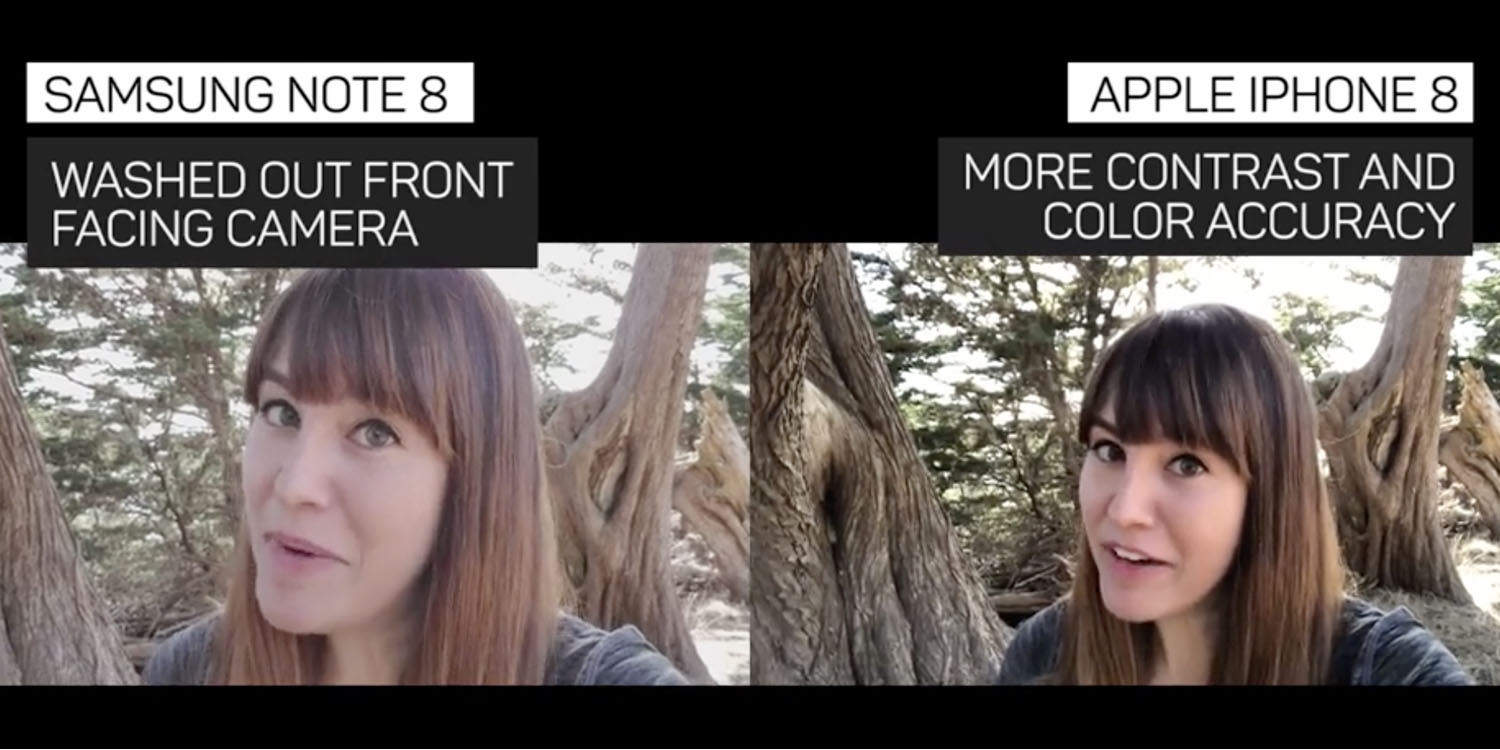 With more and more people relying on their smartphone as both their camera and camcorder, the performance of the cameras is ever more important. A video shootout between the iPhone 8 Plus and Samsung Galaxy Note 8 found a number of interesting differences between them.

The test found that there were areas where Samsung has an edge, but overall it’s clear that the iPhone emerged the winner …

CNET began by comparing exposure, color and auto-focus performance. In a frame-grab used to illustrate the main difference between the video capture, it found that the iPhone 8 Plus image was punchier, at the expense of blowing out some highlights.

It looks to me like Samsung applies HDR to a greater extent, which allows it to capture more dynamic range, but that does come with a downside. While the Note 8 picks up a lot more of the shadow detail, and does a better job of preserving highlights, that does give a rather flat look, especially in skin tones.

The frame-grab illustrates this well, the iPhone 8 Plus shown on the right:

This is always a judgement call, so your preference may be for either look. Personally, I’d say that Samsung has the edge technically, but Apple wins artistically.

This was also true for auto-focus, where the Note 8 did a technically better job, switching focus point very rapidly, but this ended up looking jerky, while the slower focus-tracking of the iPhone 8 Plus gave a more cinematic feel. On the other hand, the Note’s combination of optical and digital image stabilization gave smoother camera movement.

The iPhone won when it came to the front-facing camera, while the Note did a much better job with audio recording.

The iPhone has twice the frame-rate of the Note, allowing smooth slo-mo footage, while the Note is limited to 30fps in 4K which effectively rules out using slow-motion at maximum resolution.

Finally, the iPhone won when it came to coping with both extremes of light. For what’s known as contre-jour – shooting directly toward the sun – the iPhone gave some subtle lens flare and good contrast, while the Note had more distracting flare and poorer contrast across the image. And in low light, there was no contest.

When filming with the Note, the AMOLED screen meant the video image looked bright and vivid compared to the iPhone. Viewing the video playback on a computer screen was a different story, as the low-light image from the Note showed much more noise in shadow areas and light bleeding from external light sources. The iPhone’s image, while a little darker in exposure, looked cleaner. There was still noise, but the video was much more pleasing to watch and was sharper overall.

Your preference may depend on what you shoot, and your own tastes, but for me, based on this, I’d shoot with the iPhone. You can watch the video and decide for yourself over at CNET.