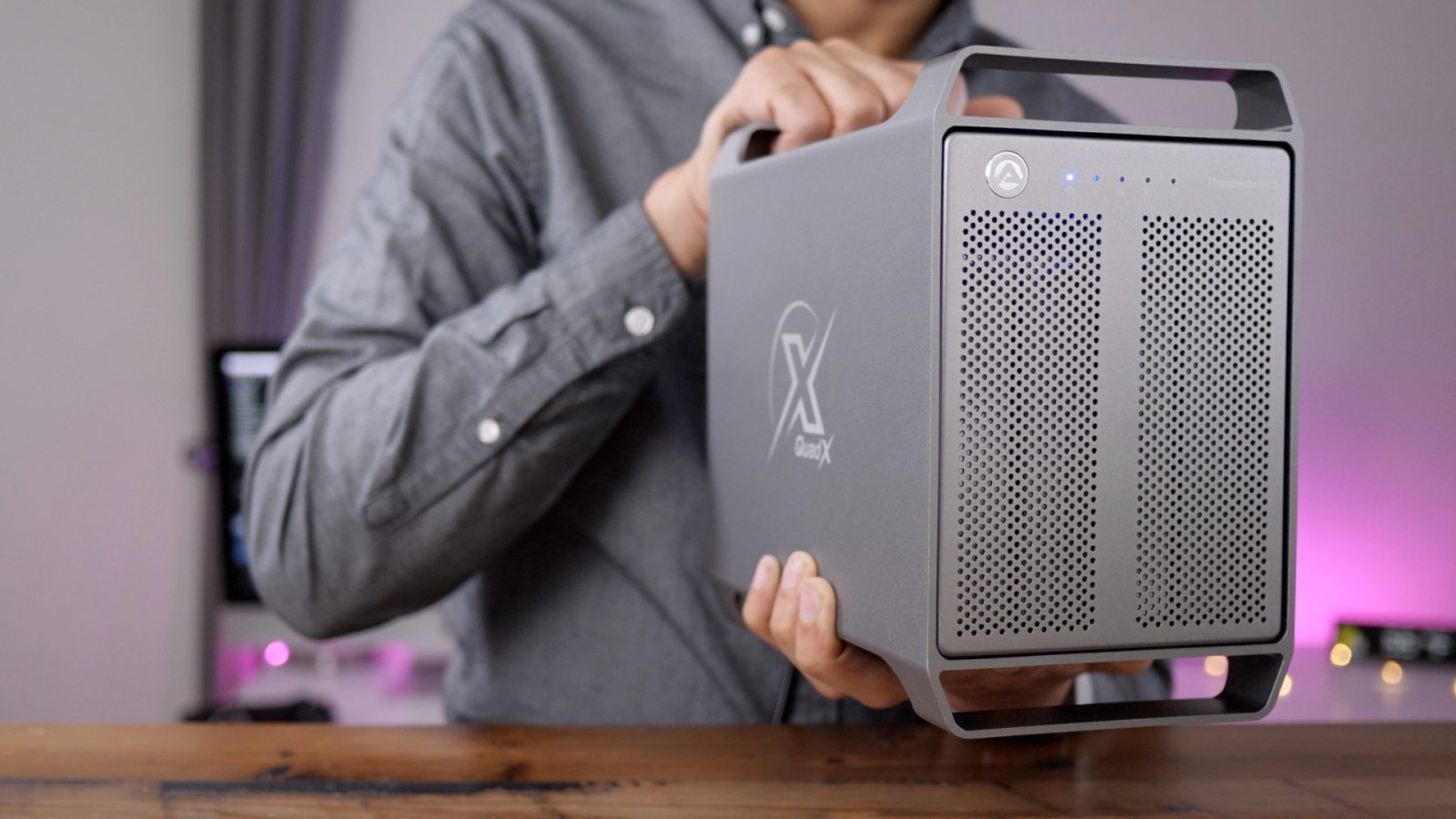 When it comes to Thunderbolt 3 support, there are a handful of companies that immediately come to mind. Akitio, a California-based innovator, is definitely one of those companies.

One of its first big Thunderbolt 3-equipped products, the Akitio Node, made headlines for its inclusion of a macOS-compatible Thunderbolt 3 chipset. Since then, it has released a variety of products that support the high-bandwidth interface.

The latest such release is the Akitio Thunder3 Quad X. Featuring a similar naming convention as earlier releases, the Thunder3 Quad X is notable for a design that pays homage to the classic Mac Pro “cheese grater” design.

Similar to the Thunder3 Quad Mini, the Quad X supports up to four drives, and can harness software RAID to achieve impressive data transfer rates. Should those in need of a direct attached storage solution consider the Akitio Thunder3 Quad X? Watch our hands-on video walkthrough for the details.

Outside of design, the biggest difference between the Quad Mini and the Quad X is that the latter can support 3.5-inch drives. This makes the Quad X an ideal candidate for users looking for the maximum amount of direct attached storage space, since traditional spinning disks can accommodate a significantly larger amount of data than the largest solid state drives.

If you’re looking to eek out the maximum amount of performance, however, you’ll want to use 2.5-inch SSDs instead. You’ll then need to configure all four drives in a RAID 0 configuration via the macOS Disk Utility to achieve the unit’s maximum theoretical throughput. 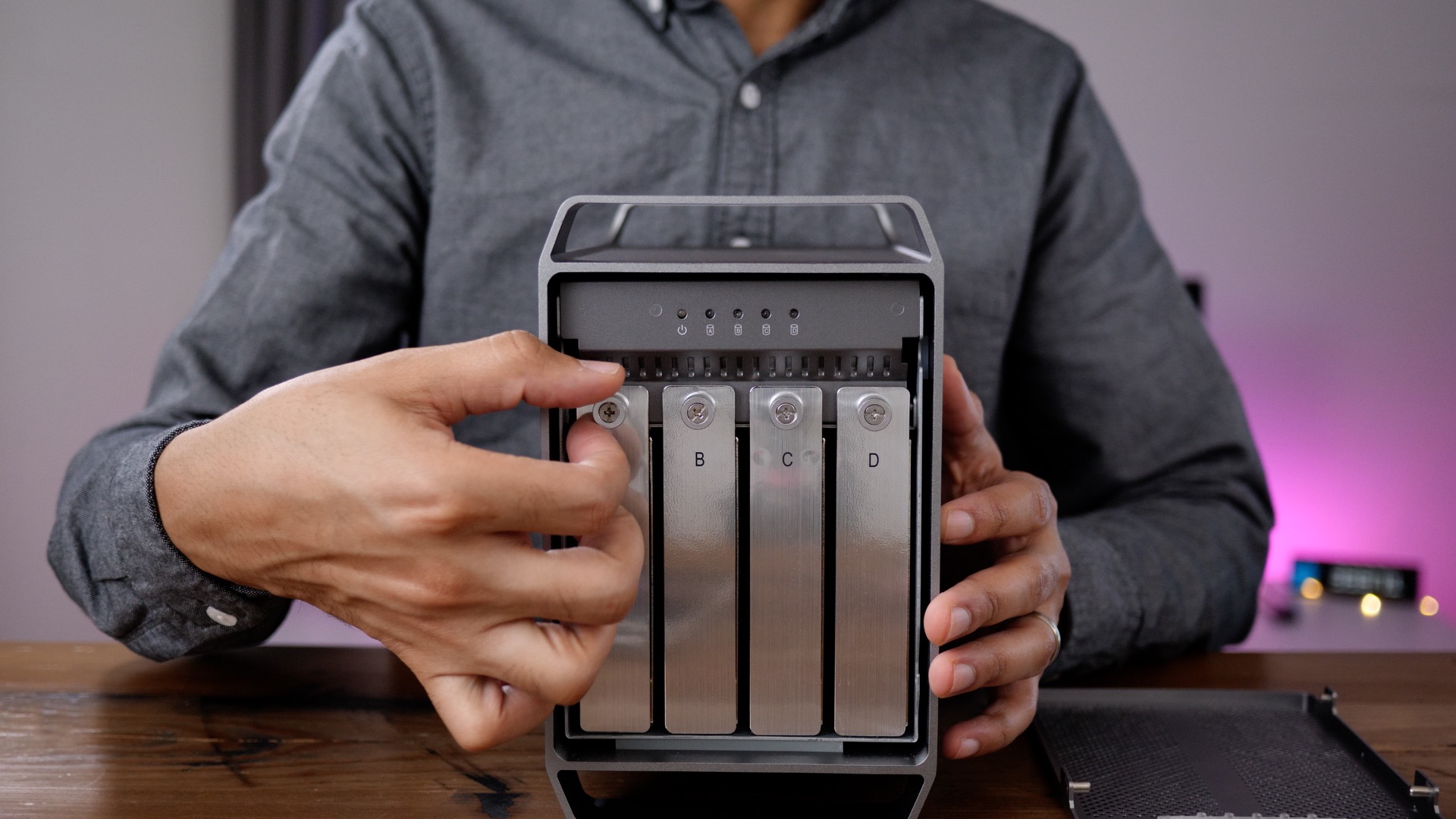 In that case, you may be better off opting for the Akitio Thunder3 Quad Mini, which only supports 2.5-inch drives and 15W of power delivery, but comes with a slightly lower price tag and a smaller desktop footprint. Admittedly, though, the design of the Quad Mini looks a little boring next to the larger, character-infused Quad X. If design is at the top of your list, then I can see why you’d opt for the Quad X, even if you’ll only ever use 2.5-inch SSDs.

The front cover of the Quad X is easily removed by pressing on the bottom of the cover. Inside, you’ll find four alphabetically sorted drive bays that can be removed without tools using thumbscrews. Akitio provides the necessary screws to mount either 2.5- or 3.5-inch drives inside the enclosure. 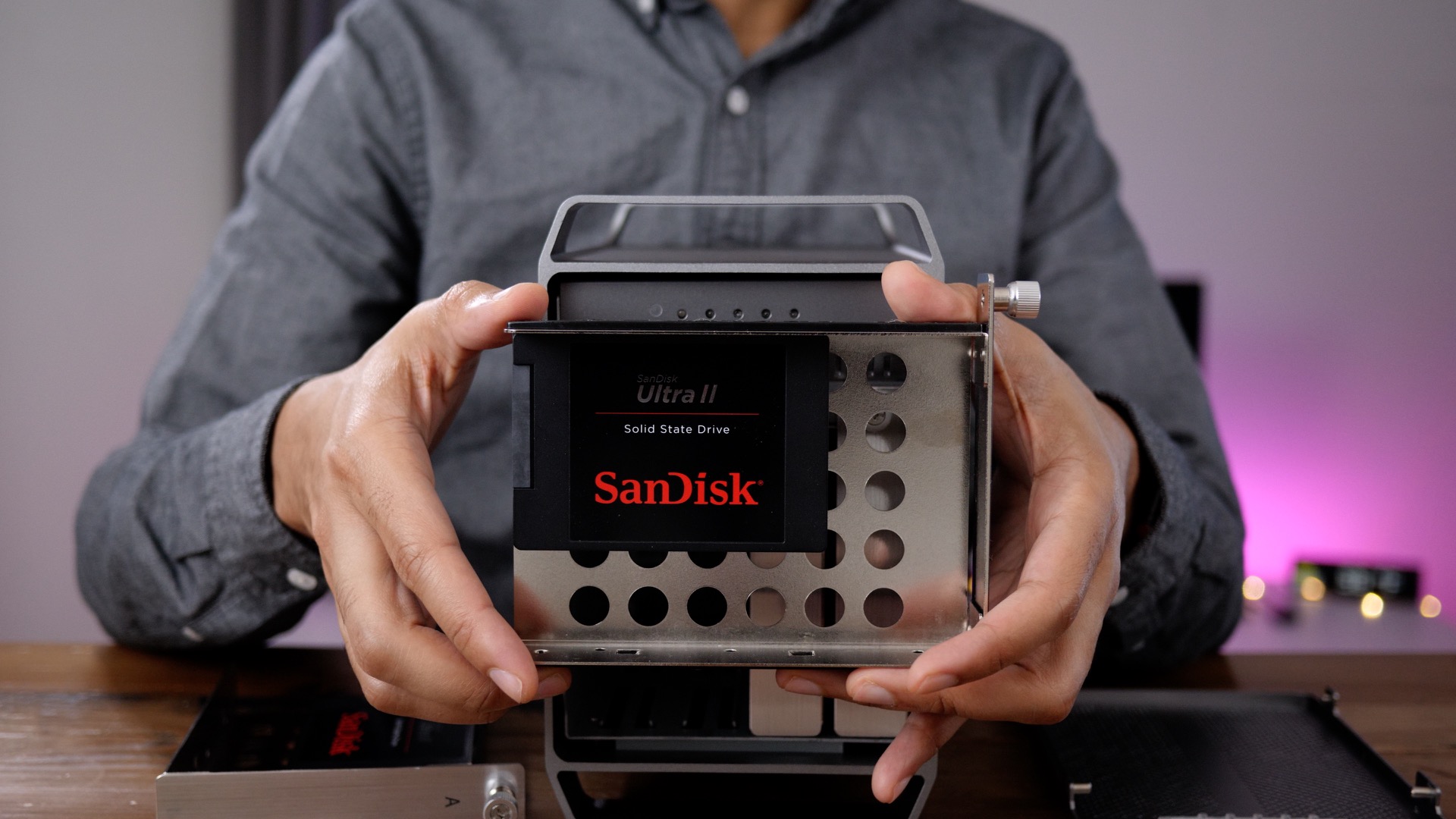 Like other Akitio Thunderbolt 3 products, a fan switch is included that allows you to disable the unit’s fans for quieter operation. If you’re using solid state media, this makes the enclosure completely silent. If you’re using traditional spinning disks, then you’ll still have to contend with the considerable noise that these drives create. Whatever the case, Akitio recommends that you don’t leave the fan disabled for more than 30 minutes at a time. I imagine that this is especially true when using spinning hard drives, as these have a higher rate of failure than SSDs. 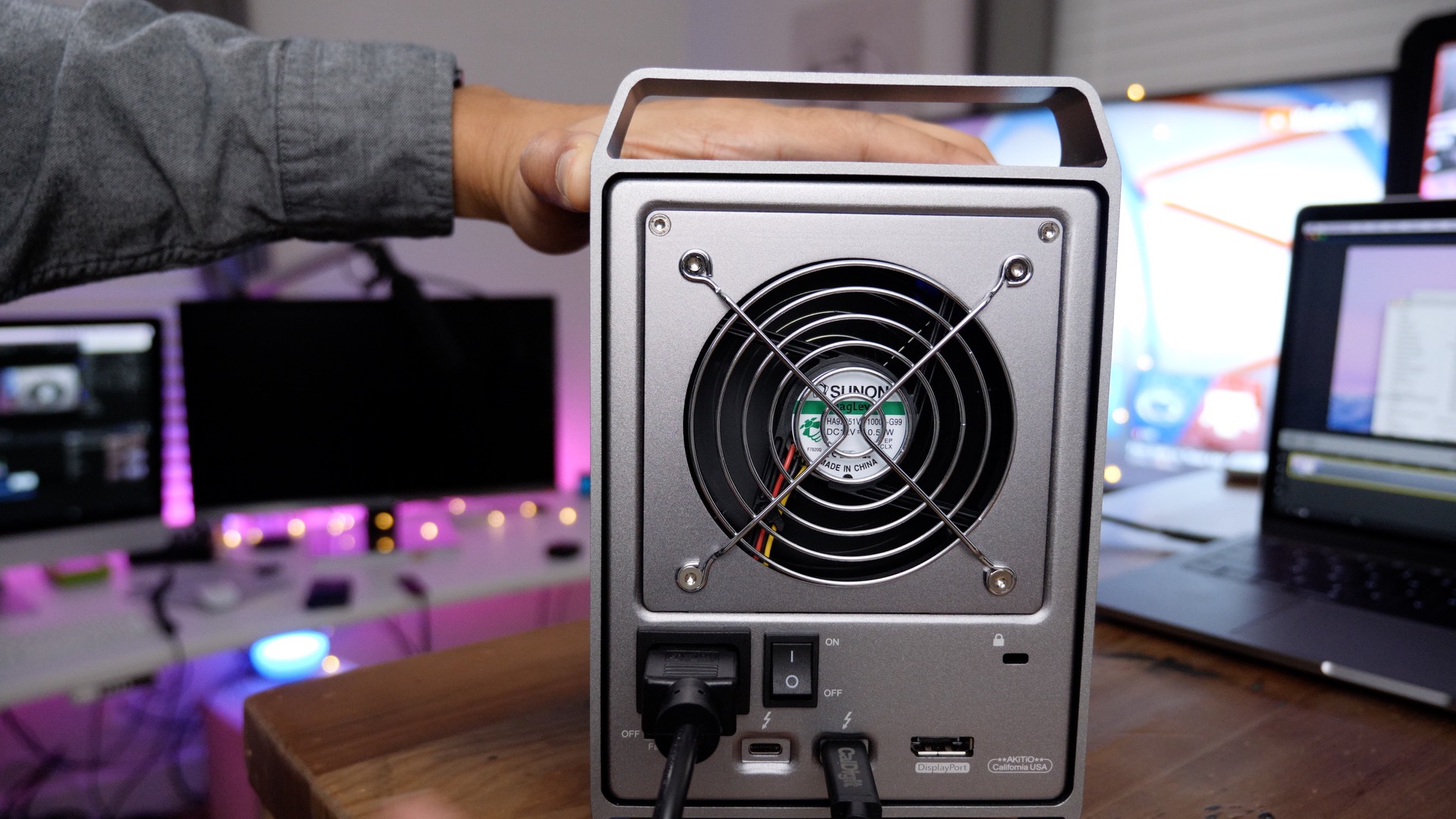 In my opinion, a fan disable switch probably wouldn’t be as necessary if the unit used a higher quality, quieter fan — see my hands-on video about my compact Akitio Thunder3 eGPU for an interesting discussion about fan noise — but I still very much appreciate the option to disable the fans outright.

To test the enclosure, I mounted four 1TB SanDisk Ultra II SSDs inside. After setting up a RAID 0, I used the Blackmagic Disk Speed Test to test the read/write performance of the drives. Here are the results: 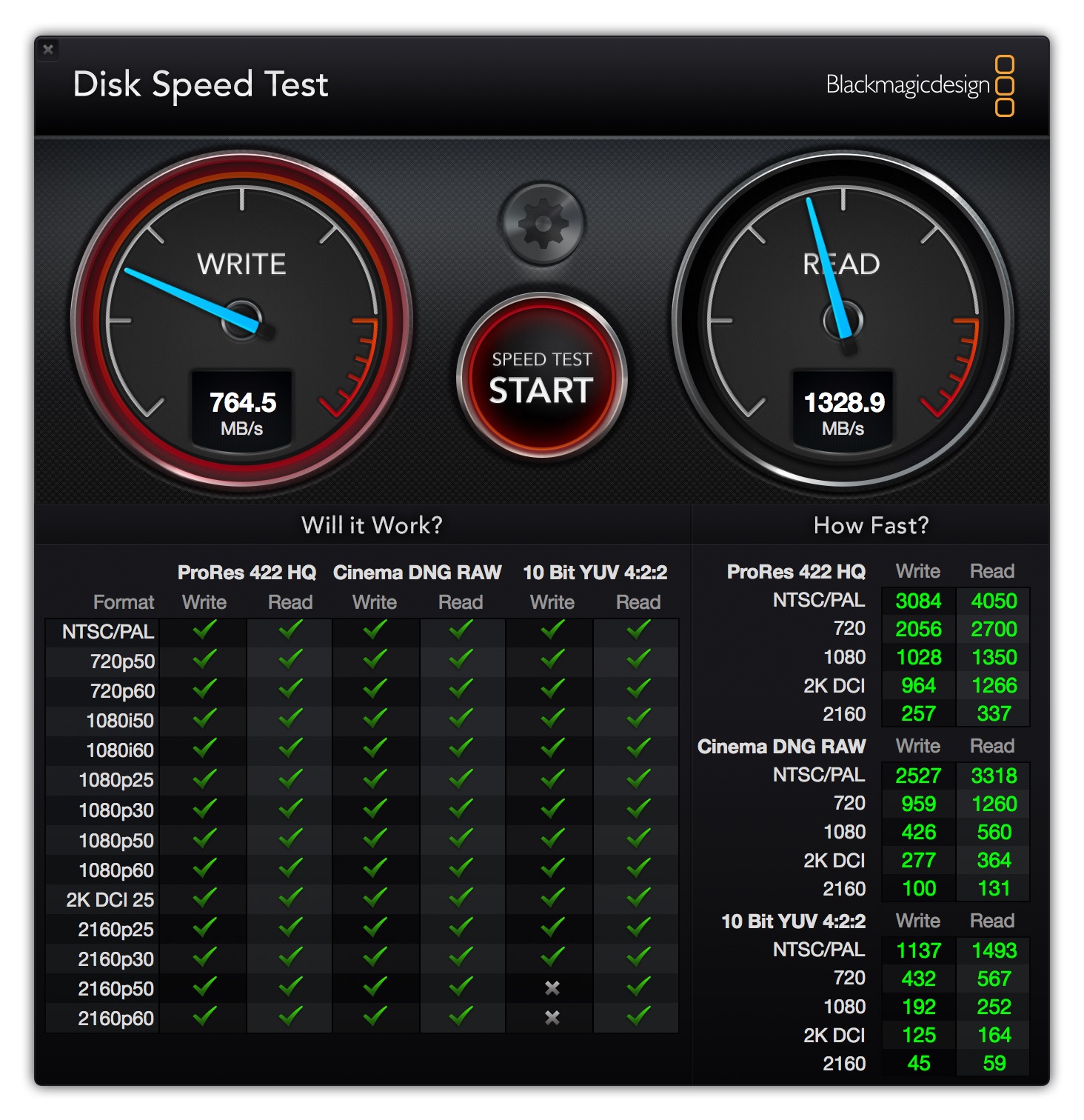 I then used QuickBench to test the sequential read/write speeds: 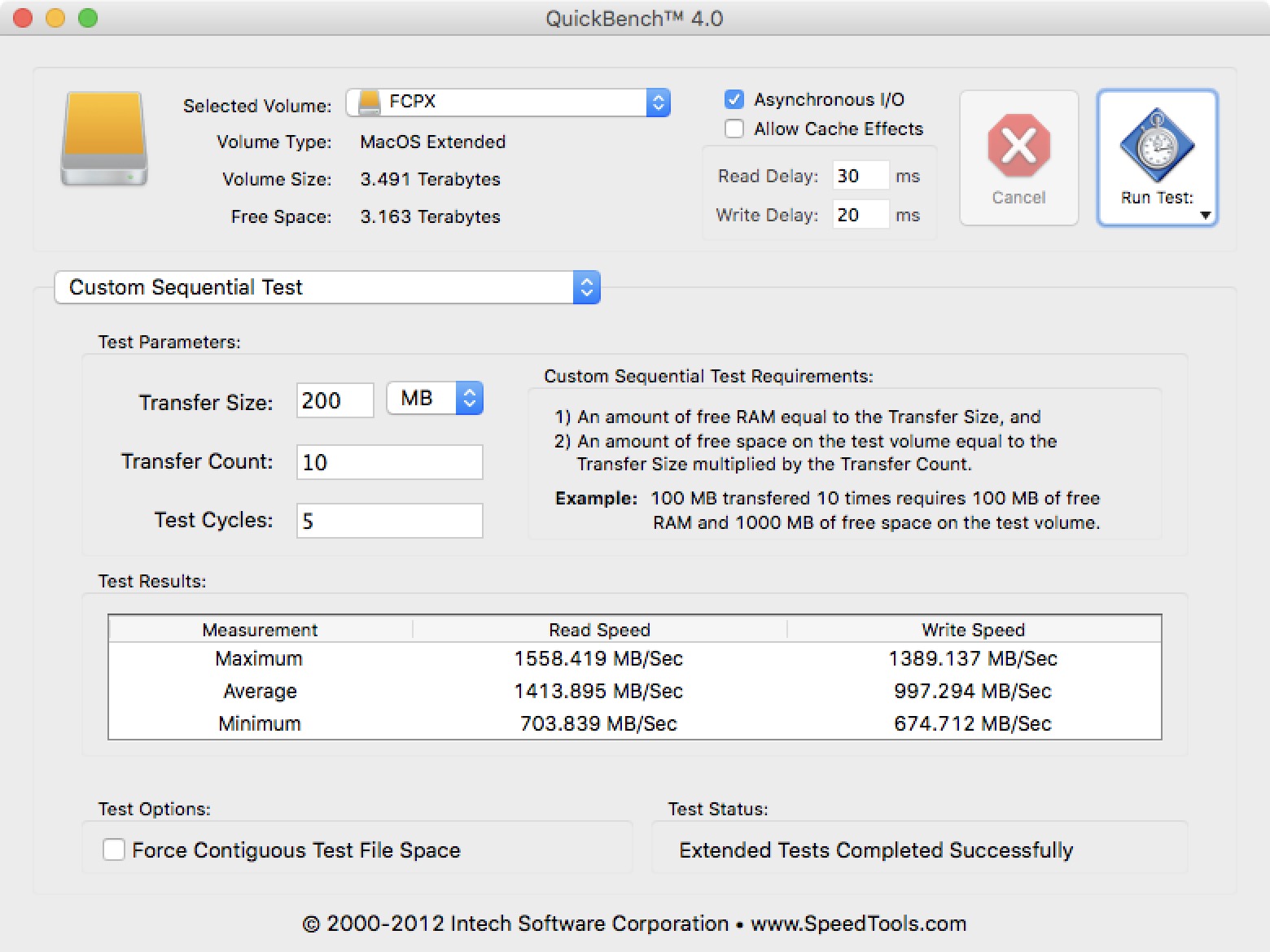 As you can see, this setup will easily accommodate 4K workflows, even at 60 fps. RAID 0 also lends the benefit of having access to a relatively large amount of storage, since the space on all drives is combined.

The big downside, however, is that if one drive in the array fails, all data is lost. This is something you’ll need to figure out before opting for a RAID 0 configuration. If the data you’re working with is backed up elsewhere, then it shouldn’t be a huge problem, but I wouldn’t advise using a RAID 0 setup, especially with traditional spinning hard drives, without backing up important data that you can’t risk losing first.

The Quad X only delivers 27W of power via its USB-C ports, which isn’t enough to charge either the 13-inch or 15-inch MacBook Pro at full speed, but should do an okay job of trickle charging, or at least maintaining current battery levels. The unit also lacks any additional I/O, like USB or an SD Card slot, which would prove useful to MacBook Pro owners lacking these connections. 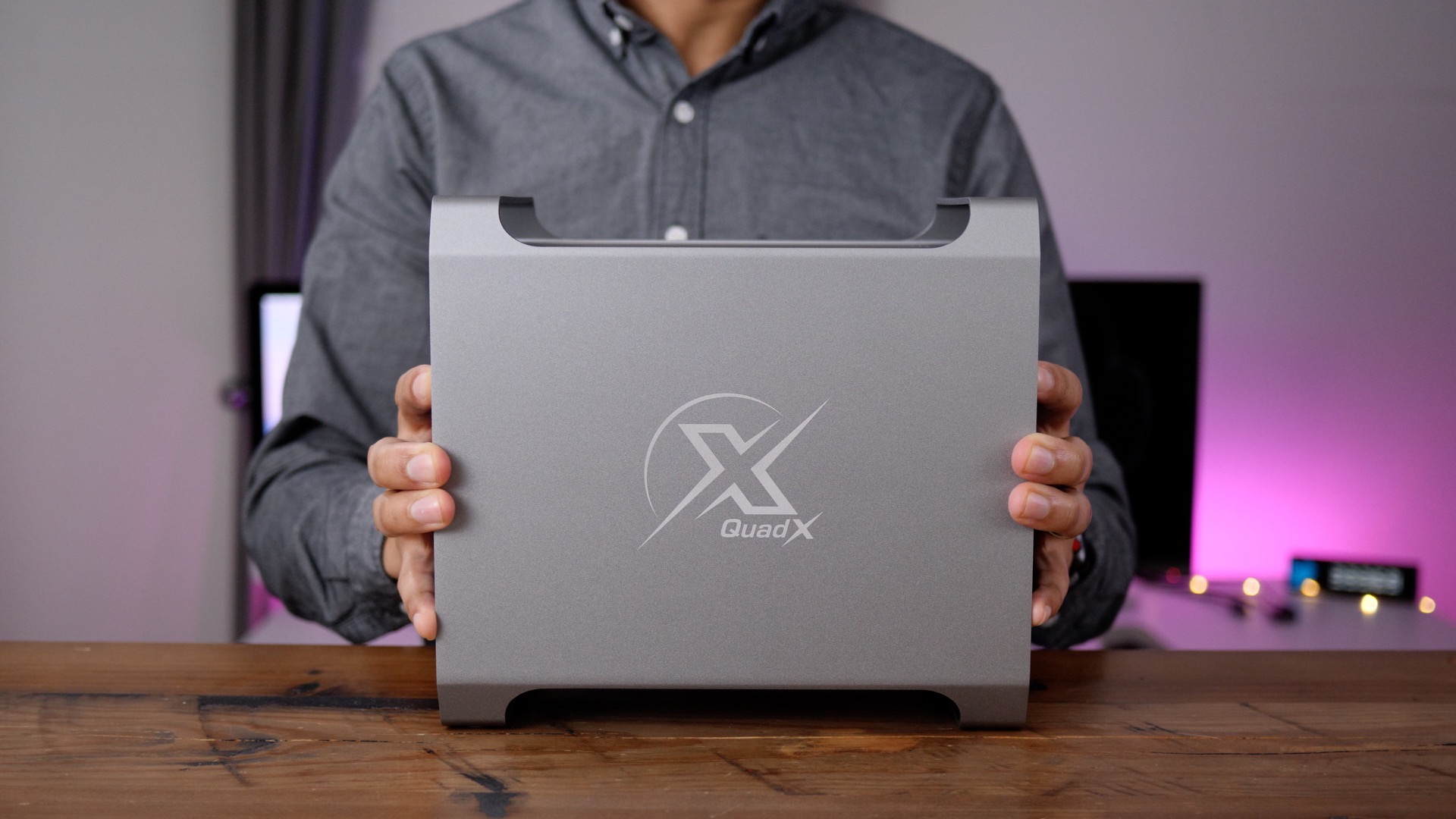 That said, when combined with a 4K display via the unit’s DisplayPort connection, the Thunder3 Quad X can make for a potent video editing solution that provides a significant amount of direct-accessible storage space. And while it’s possible to address all four drives inside of the enclosure separately, you’ll most likely want to use Raid Assistant in the macOS Disk Utility to combine the drives with RAID 0 for optimum performance. Such speed is especially important for those of you working with 4K video at high frame rates. 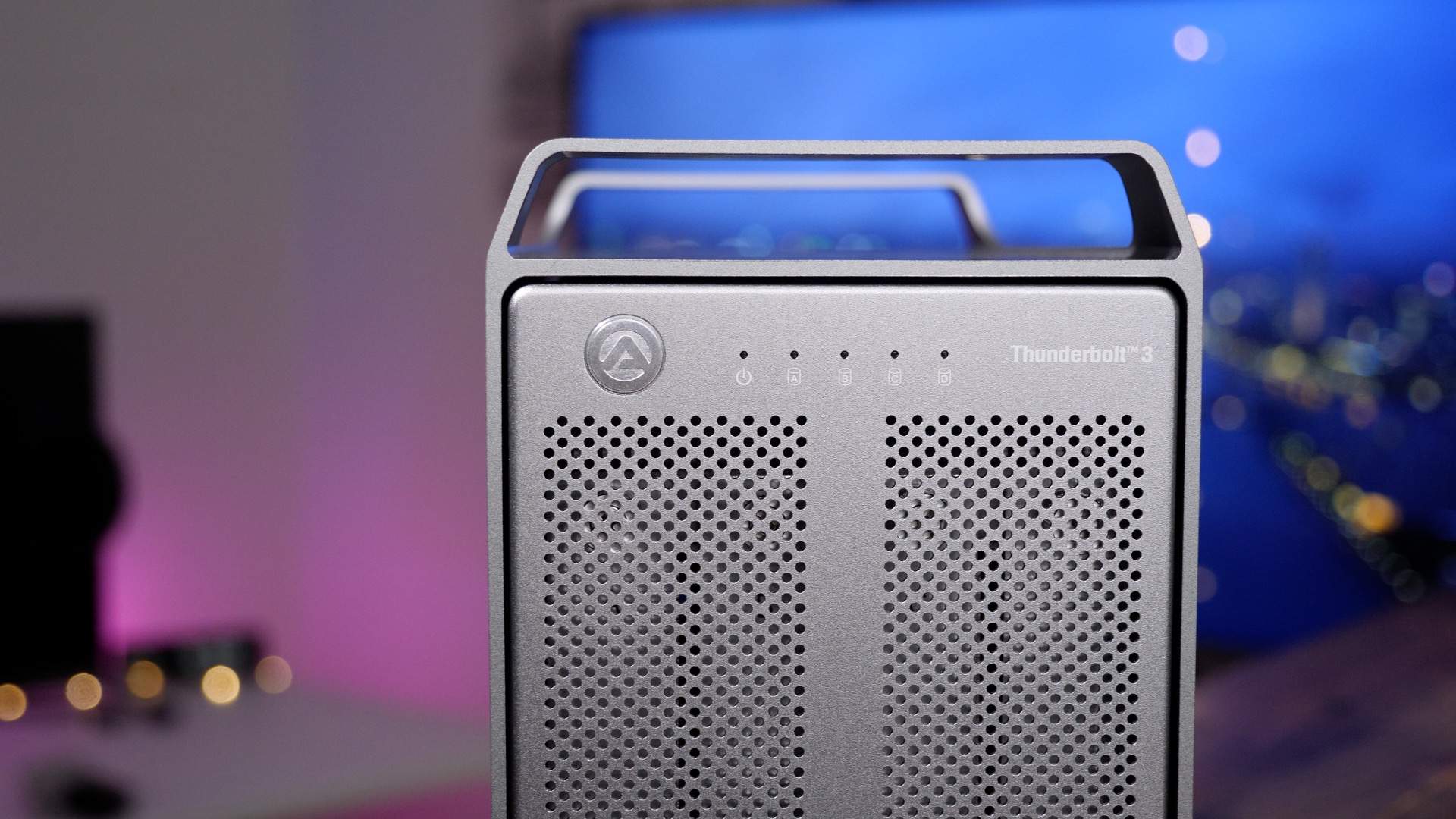 The design of the device, and the desktop footprint certainly won’t be for everyone, but for those who want the flexibility that a larger enclosure offers, and/or for those who have a particular fondness for the “cheese grater” Mac Pro, the Akitio Thunder3 Quad X may prove to be a solid addition to your setup.

What do you think? Feel free to leave thoughts and feedback down below in the comments.