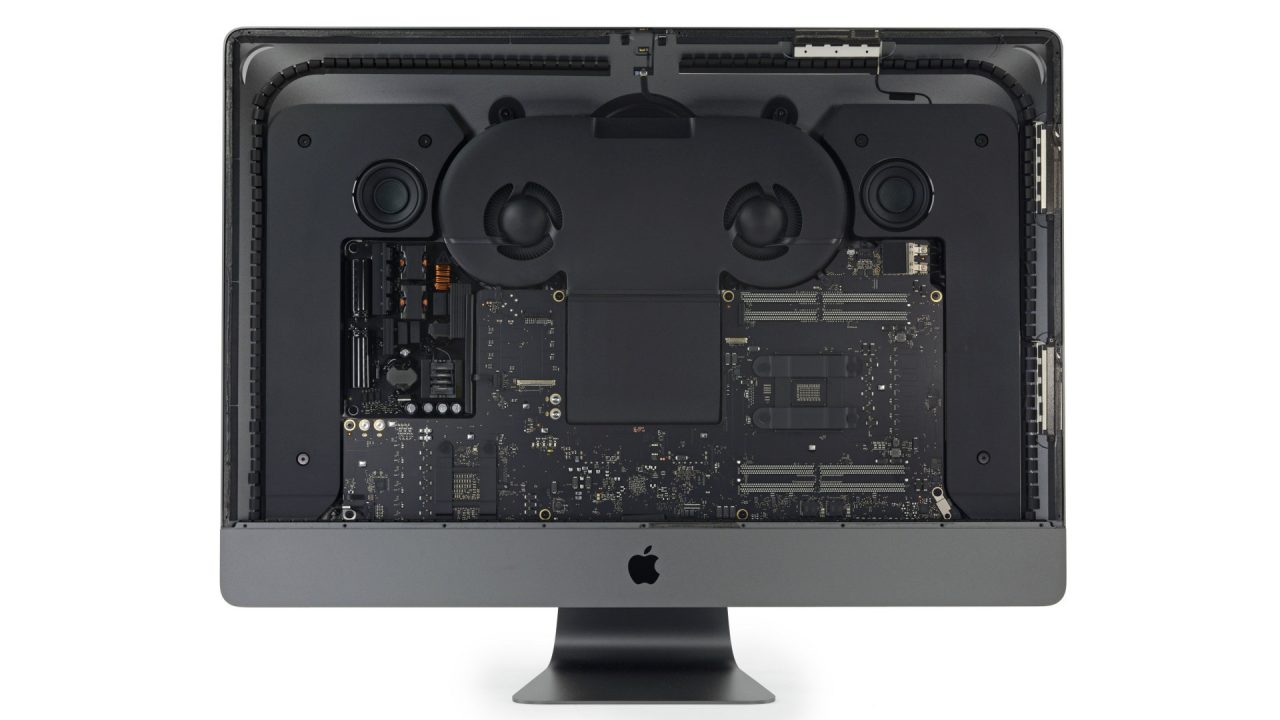 As expected, iFixit has performed a thorough tear down the iMac Pro. This teardown comes on the heels of another look at the machine’s internals by third-party Mac accessory maker OWC. That initial look provided us with a great idea of what to expect from the iMac Pro’s internals, but in traditional iFixit fashion, the San Luis Obispo-based company provides us with a more nuanced glance inside Apple’s professional all-in-one.

Some things of note from the teardown are as follows:

The iMac Pro features a massive dual fan cooler to help keep the CPU and GPU cool. Notably, the iMac Pro is remarkably quiet, even when performing intense operations that would normally cause the 5K iMac to sound like a jet preparing ready for takeoff.

The lack of a full sized desktop hard drive frees up considerable space inside the iMac Pro’s chassis for the larger cooling system along with other vital components. Another casualty of the new cooling system is the lack of an external RAM door, which allowed 5K iMac owners to upgrade the machine’s RAM with ease.

The rear air vent, as we highlighted during our initial what to expect post and video is about 80% larger to increase cooling capability. There is also a dual-port air intake near the bottom of the machine beneath the revamped I/O.

As previously noted, the iMac Pro uses standard 288-pin RAM sticks, which can technically be user-replaced, but are much more difficult to access. Apple says that you can upgrade the RAM but it’ll need to be done by authorized repair personnel. iFixit was able to perform the RAM upgrade itself, maxing out the machine with four 32GB sticks of RAM for a total of 128GB. 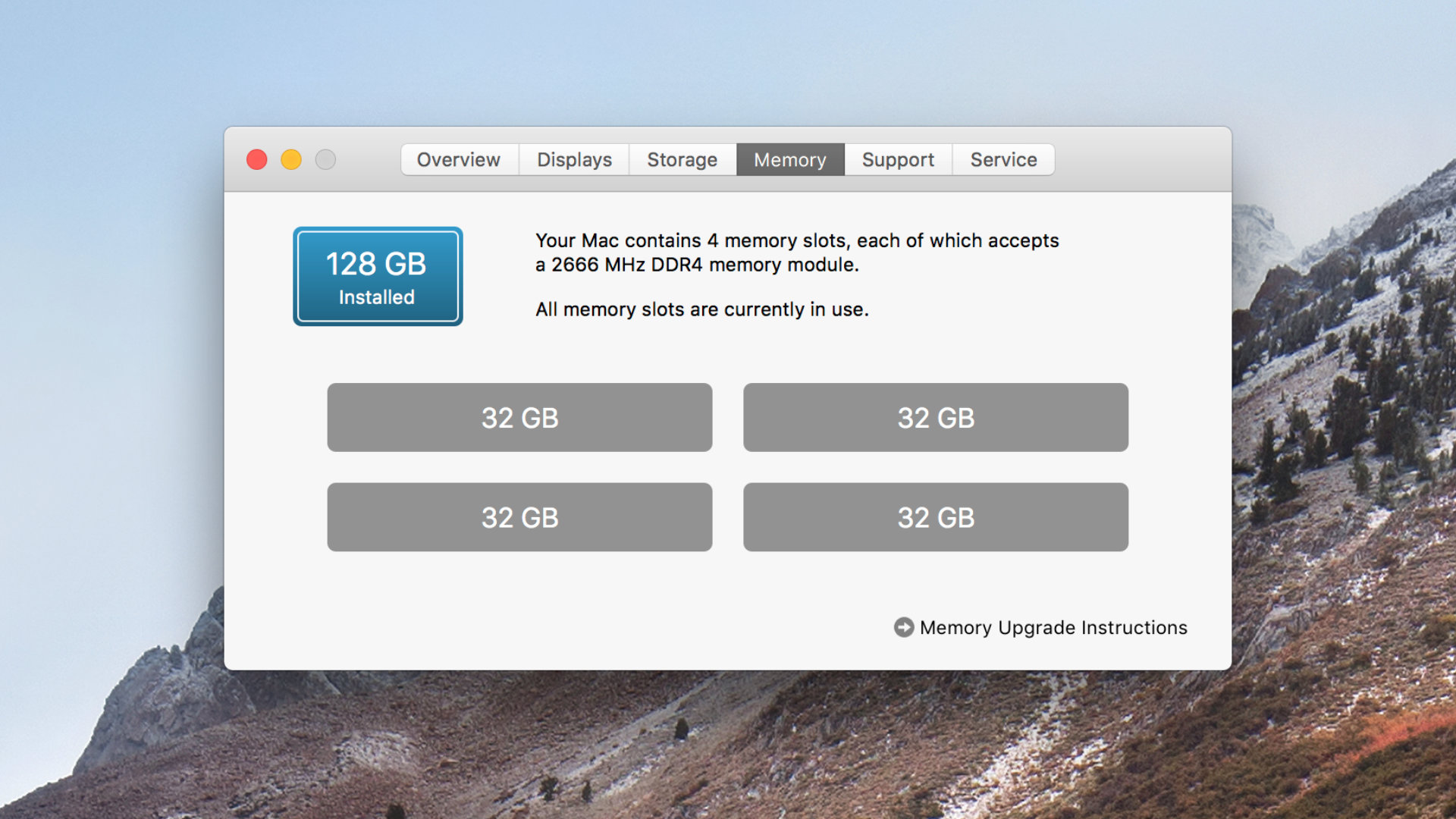 The teardown also reconfirms that the base iMac Pro uses two 512GB SSD units in a striped RAID setup for a total of 1TB of flash storage. 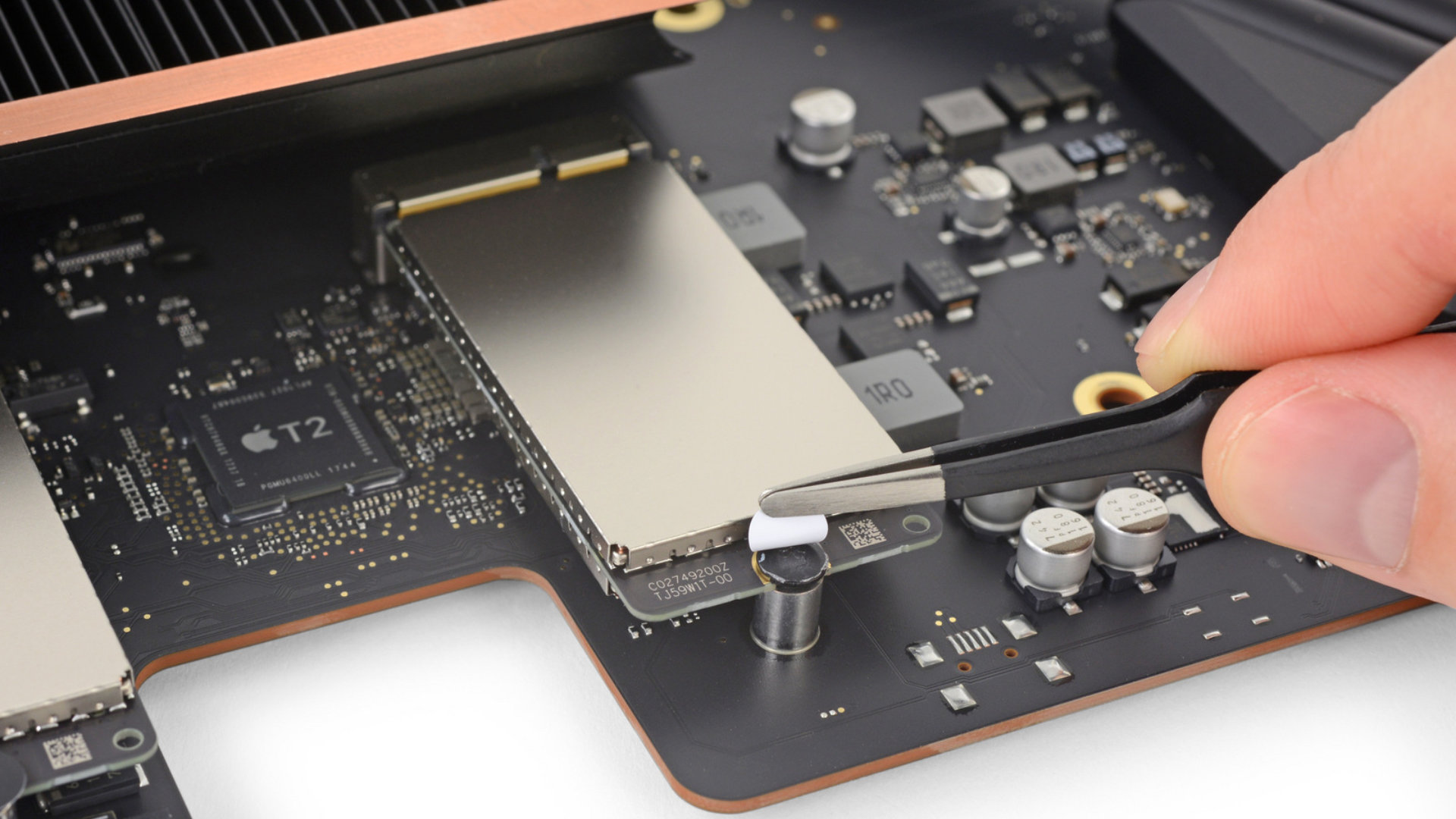 After continuing the teardown, iFixit notes what OWC initially confirmed in its teardown: the GPU is soldered down to the logic board, meaning that it’s non-upgradable for adventurous iMac Pro owners. The good news is that the CPU is not soldered down, meaning that it may be able to be upgraded. iFixit notes that the CPU appears to be custom silicon provided by Intel, instead of an off-the-shelf Intel Xeon W class chip. 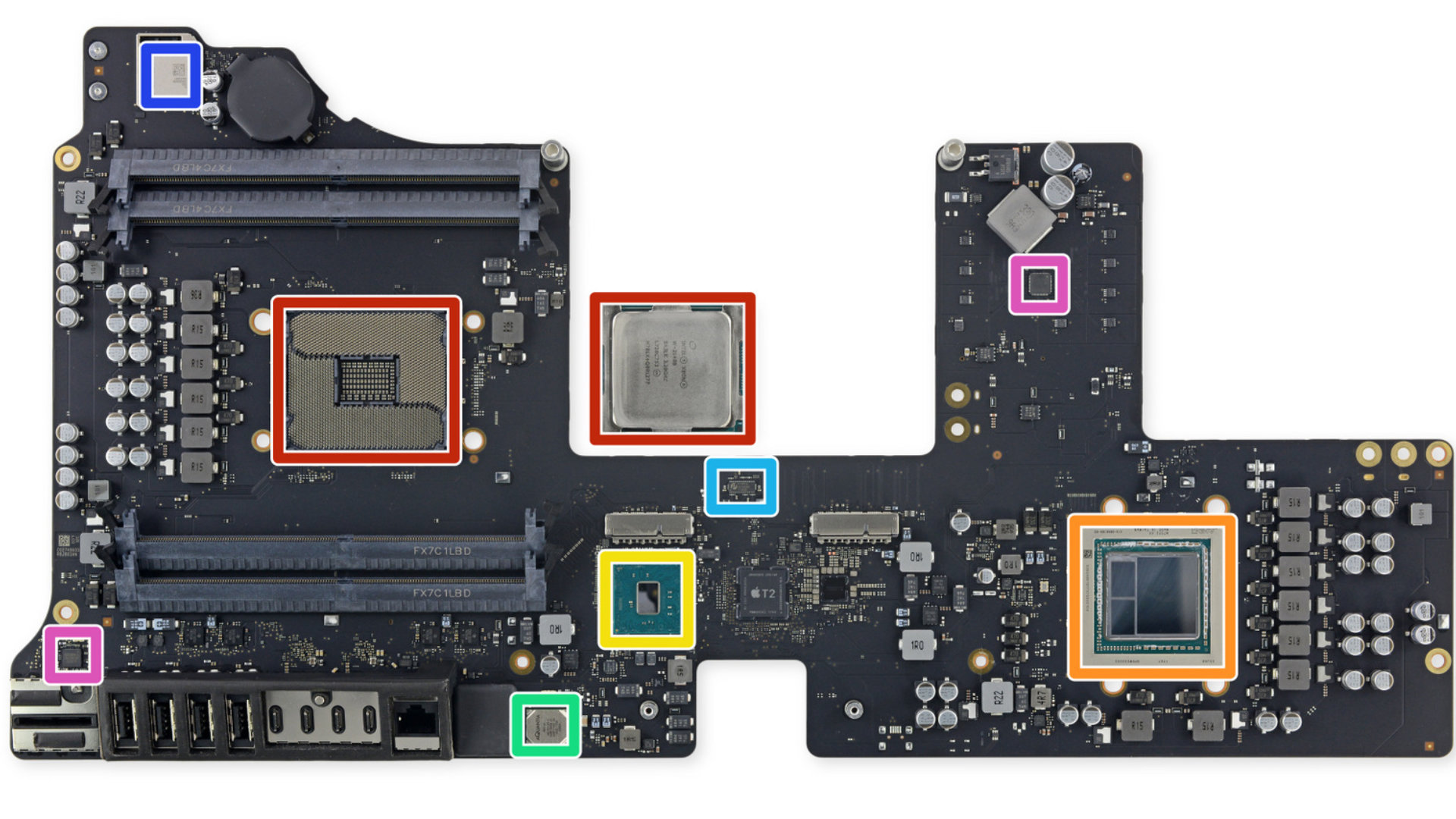 Speaking of the CPU, iFixit finds the Intel Xeon W-2140B inside the base model iMac Pro, which is likely an under clocked version of its W-2145 for heat management reasons.

Other details include a 2x Thunderbolt 3 controller from Intel (1 controller per two ports), and a Genesys Logic SD 4.0 memory card controller, which handles work from the faster USH-II memory card reader. 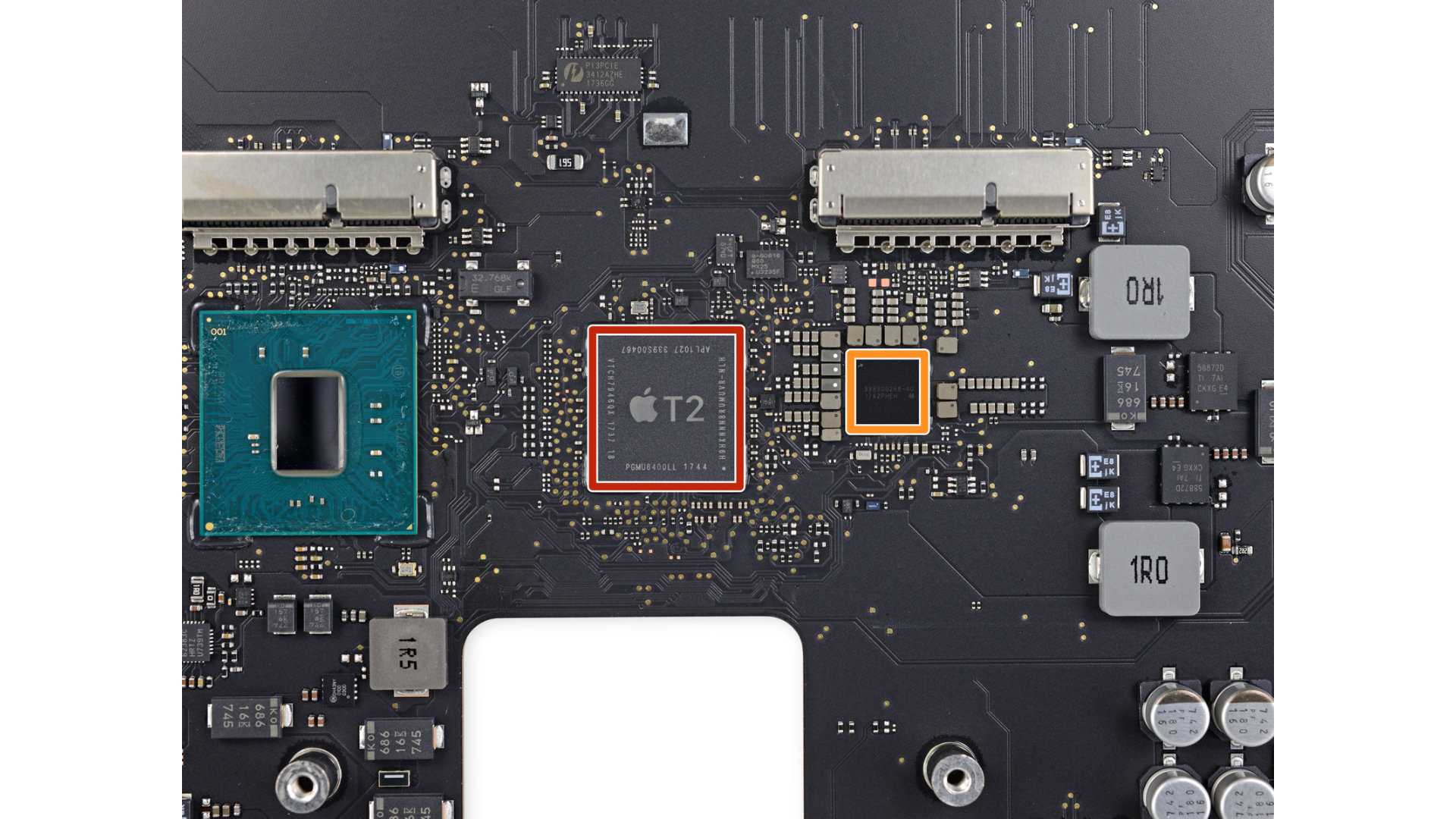 The T2 custom chip, which is the follow-up chip to the Apple T1 first found in the 2016 MacBook Pro with Touch Bar, handles SMC functions, ISP for the FaceTime Camera, audio control, and more. It also controls aspects of hardware encryption, which introduces some interesting new hardware restore options that are (for now) exclusive to the iMac Pro. 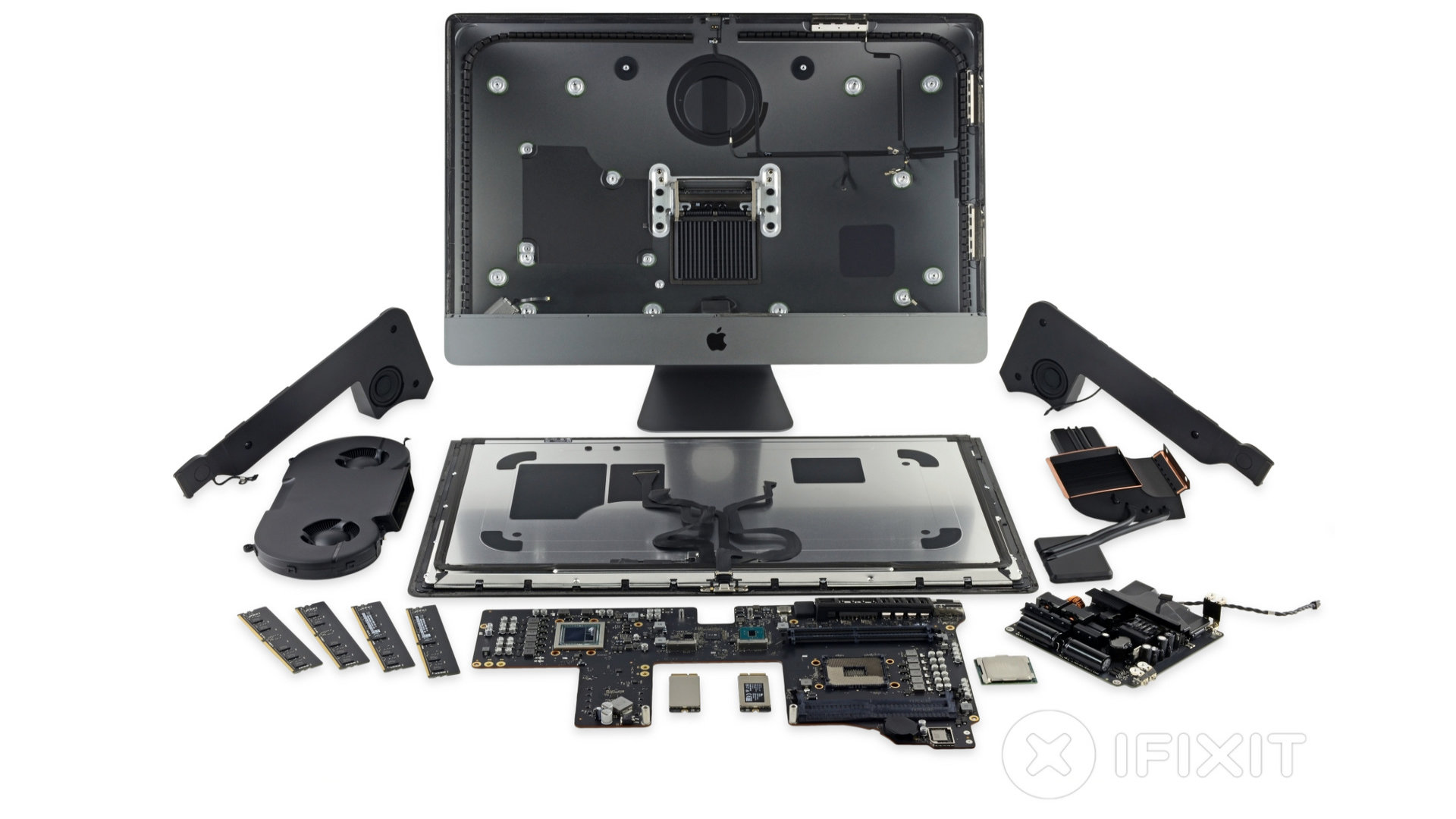 iFixit’s teardown also confirms that the display is the same 5K display found in the 2017 5K iMac. That means there are no screen enhancements for the iMac Pro, which may be a bit disappointing for users looking for something brighter than the 500 nit-rated LG manufactured unit.

Unsurprisingly, the iMac Pro gets a low repairability score of 3. That said, it’s still possible to upgrade the RAM, and it may even be possible to upgrade the CPU and SSDs in the future. Unfortunately the GPU is soldered into place, but with Thunderbolt 3-enabled GPUs, that becomes less of an issue. Be sure to read iFixit’s full teardown for all of the little interesting details.

We just got our hands-on the iMac Pro this weekend, and are still playing with it before providing initial impressions. What do you think about the iMac Pro’s internals from what you’ve seen?