How to stream the 60th annual Grammys live on iPhone, iPad, Mac, or Apple TV

The 60th annual Grammy Awards are set for tomorrow night, January 28th in New York City. This will be the second year for James Corden to host the awards and is sure to include some laughs along with a lot of great performances. Follow along for how to watch this year’s Grammys live on iPhone, iPad, Mac, or Apple TV.

The Grammys will air Sunday, live from Madison Square Garden at 7:30 PM ET/4:30 PM PT with red carpet coverage starting an hour earlier. As has been the case for the last 45 years, CBS will be broadcasting the awards which are set for a 3.5 hour runtime.

How to stream The Grammys on iOS, iPhone, Mac, and Apple TV

As CBS has the exclusive rights to The Grammy Awards, the best way to stream the show with your Apple device is with the CBS All Access app or website. It is a paid service (starting at $5.99/month), but it also offers a free seven day trial.

You can sign up online or through the app, just make sure to cancel before the trial ends to avoid any charges if you don’t want to try it out for longer (credit/debit card required for trial).

Once you’re all set with All Access, you can stream The Grammys on any of your Apple devices. On Apple TV, iPhone, and iPad head to the App Store, on a Mac you can watch via CBS’ website. 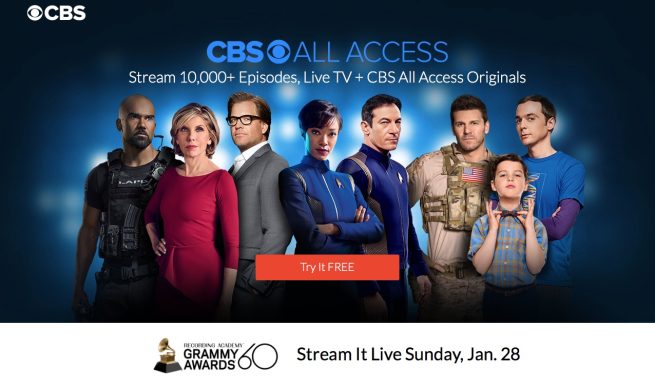 One other option if you’d prefer to skip the CBS All Access free trial and don’t have cable is to use an antenna. While getting one from Amazon in time might be tricky, you can find a range of good options from $20 from your local Target store or other retailers.

This year The Grammys will feature performances from these artists and more:

As for some of the big nominations, Luis Fonsi’s Despacito is up for record of the year (awarded for a single or for one track from an album) along with Bruno Mars, Kendrick Lamar, Jay Z, and Childish Gambino. The same artists are also up for album of the year.

In other music news, NAMM 2018 is finishing up this weekend. Be sure to check out our roundup of the best new Thunderbolt/USB-C interfaces, iOS controllers, synths, and other products announced at the show.