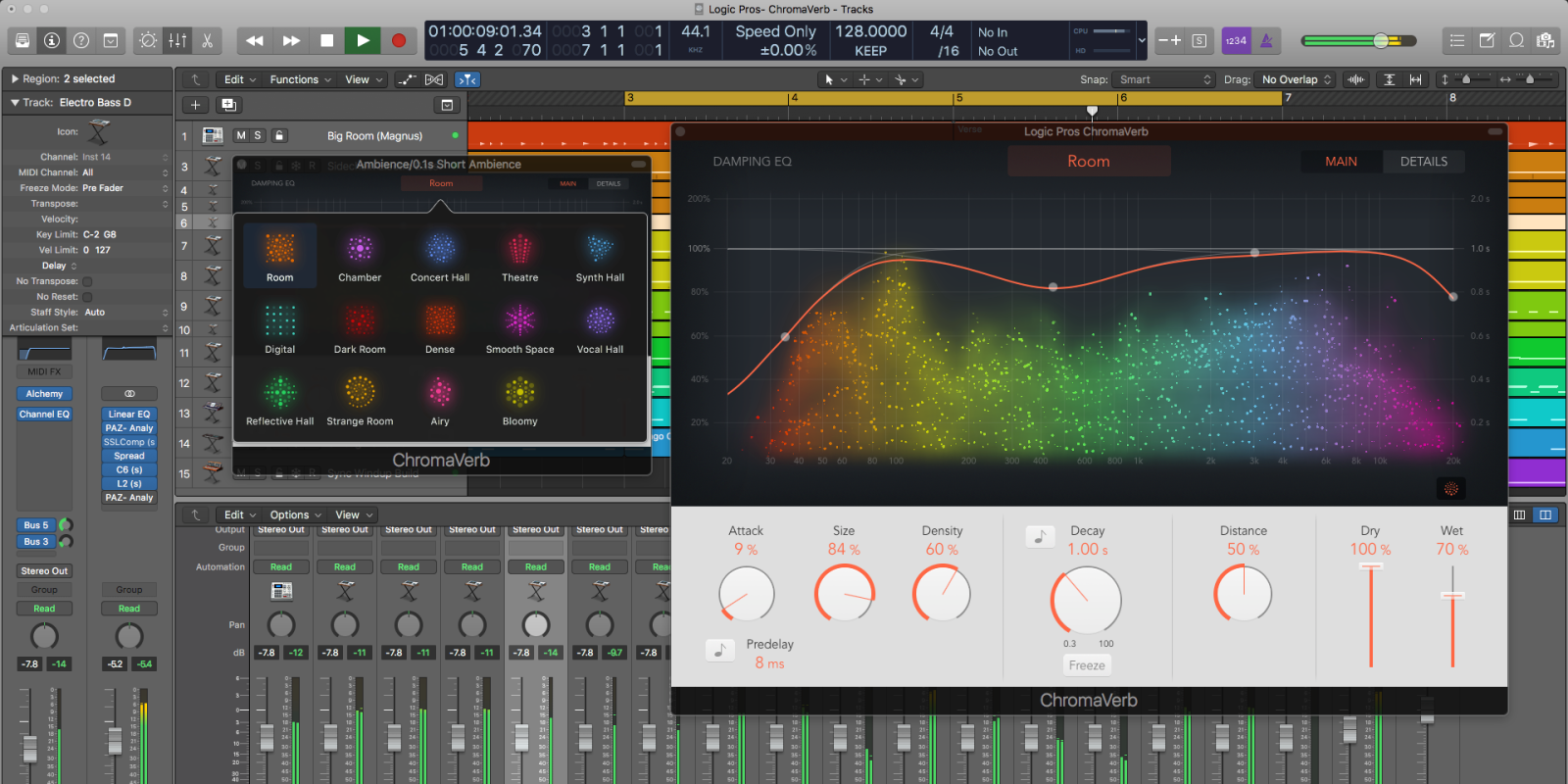 This week on Logic Pros, we are continuing our deep dive into all the latest new features in Logic Pro X v10.4. Apple’s flagship music production software was the recipient of a massive new (and completely free) update a couple weeks back with loads of new features and gear. Last time we took an in-depth look at the new multi-effects units built-in to Logic (Step FX and Phat FX), and now it’s time for the new ChromaVerb.

After the considerable amount of work gone into the Space Designer reverb plug-in over the last number of years, we really didn’t expect to see a new flagship reverb like this. ChromaVerb certainly isn’t as advanced or complex in its functionality as something like the Space Designer, but therein lies its strongest features. Space Designer has always felt a little overkill for musicians just trying to setup a solid reverb Send for a mix. Its powerful IR based spaces (think sampled room tones/conditions) and time-based filtering can make from some insane ambience and even chaotic noise, but ChromaVerb is about as rock-solid and easy to use as it gets. 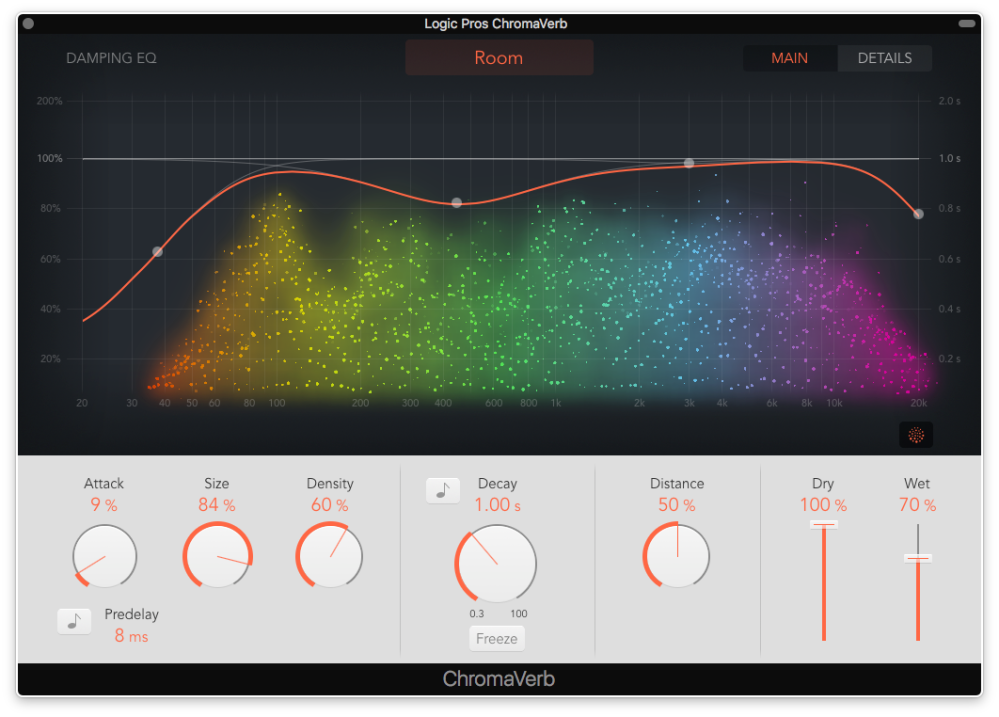 You’ll find all your basic reverb controls here from a basic envelope and distance settings, to more interesting features like an extra long decay/freeze setting and the incredibly simple to use graphical filters. The entire interface is basically split into two sections: Main and Details (both of which are selectable from the top right hand corner of the UI).

First let’s take a look at the various reverb models available. You can think of these as the overall sound or tone of your reverb. You’ll find everything from traditional options like rooms, chambers and halls to more unique spaces like digital, bloomy, and strange room. So while it might not offer up as much customizable rooms as Space Designer in this regard, there is a wealth of options available here for both standard spacial processing and more creative indulgences. These are accessed through the large pop-up menu in the top-center of the UI above that un-mistakable graphic EQ/filter.

The large Damping EQ with those bright bursts of color allows you to essentially carve out the reverb tone on your tracks just like any other traditional EQ. Those bright colors are analyzing the frequencies of your reverb response, allowing you to customize the tone to taste.

For example you might want to ditch some of the low frequency reflections in your reverb sound to clean up the overall mix and open-up the top end. While it’s definitely a little more flashy than it needs to be (the particle effect isn’t particularly useful in any technical terms as far as I can tell), it is a great way for pros and beginners alike to grab a visual of a particular reverb damping curve and customize it with a few clicks and drags. You can toggle the dancing rainbow of frequencies on and off with the small particle button on the bottom right hand corner of the Damping EQ’s graphic display.

Along the bottom of the Main panel you’ll find a series of what we will refer to as the Front Panel Controls for now. You’ll find your standard Attack and Decay time controls which determines the onset and duration of the reverb reflections, as well as your standard Size and Density controls which further alter the room model choice. On the far right, the usual Dry and Wet faders adjust the ratio between the reverberated signal and the original (dry) audio at the output. 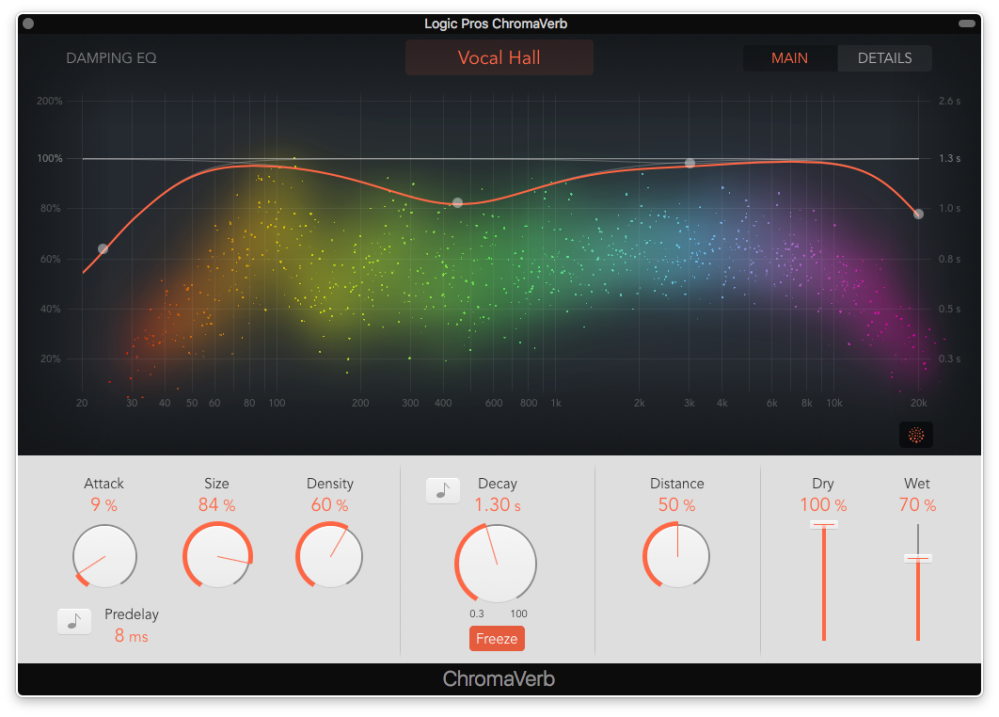 One interesting feature found in the Front Panel Controls is the Freeze function. Without getting overly technical here, this will essentially freeze or take a snap shot of the reverb sound at the moment it is engaged. It creates a sort of constant ambient (and sometimes not so ambient) tone based on the information the reverb was receiving at the moment you pressed the button. This can be great for creating odd, pad-like sounds and ambient spaces for other instruments and pieces of music to exist in.

Another quick side note here is the ability to sync the Predelay and Decay settings with the BPM of our Logic session. This can be great when using reverbs to create rhythms or call and response-like parts, or just to really lock your Send effects into the overall groove of a particular mix. Just click those music note buttons to engage sync.

Once you flip over to the Details panel, the first thing you’ll see is the Output EQ. Exactly what it sounds like, you can use this to shape the sound of the reverb in your mix. Not groundbreaking by any means, but I have watched professional mix/record engineers putting EQs/filters after reverbs in the signal chain in order to get a little more control on the overall sound for years, so this is a welcomed, built-in addition. It would have been nice to see the rainbow of bouncing skittles to represent the frequency of the reverb sound  here as well, but sadly that is not the case.

Along the bottom we have the Back Panel Controls consisting of a simple LFO-like modulation section as well as stereo width and mono controls. The Mod controls allow us to add a bit of movement or wobble to the sound with three LFO-like Mod Sources or shapes (sine, some kind of square stepper and what looks to be noise or random) as well Speed and Depth (amount) controls. There is also a Smoothing fader which can further round-out the movement in addition to the actual shape you choose.

The generally labelled Early/Late control appears to be an overall timing setting. It allows you to move the already determined reverb response back and forth in time with respect to the original (or dry) signal’s timing. In other words, we can decide to delay the entire reverb sound from its original start time by a varied amount.

The Width and Mono Maker controls are a little bit more interesting. Width is simply a stereo width control, artificially spreading the reverb sound to create a “wider” stereo image. But Mono Maker works by frequency and sounds as though it drops a portion of the reverb sound in to mono based on the frequency you have selected. Many times engineers use techniques like this on certain sounds to stand out more in a mix or just to offer an evenly proportioned sound across both sides of the stereo field. I’ll have to do some more experimentation with this one before I really get a serious grip on it, but it is certainly interesting nonetheless, especially in this built-in context.

While it may not be as complex and deep as something like a Space Designer, ChromaVerb is an extremely intuitive reverb plug-in that doesn’t eat up loads of CPU power and sounds great to my ears. Outside of extremely intimate and acoustic scenarios, it sounds comparable to my ears with some of the drastically more expensive options in my collection (even some that cost significantly more than Logic Pro X itself). 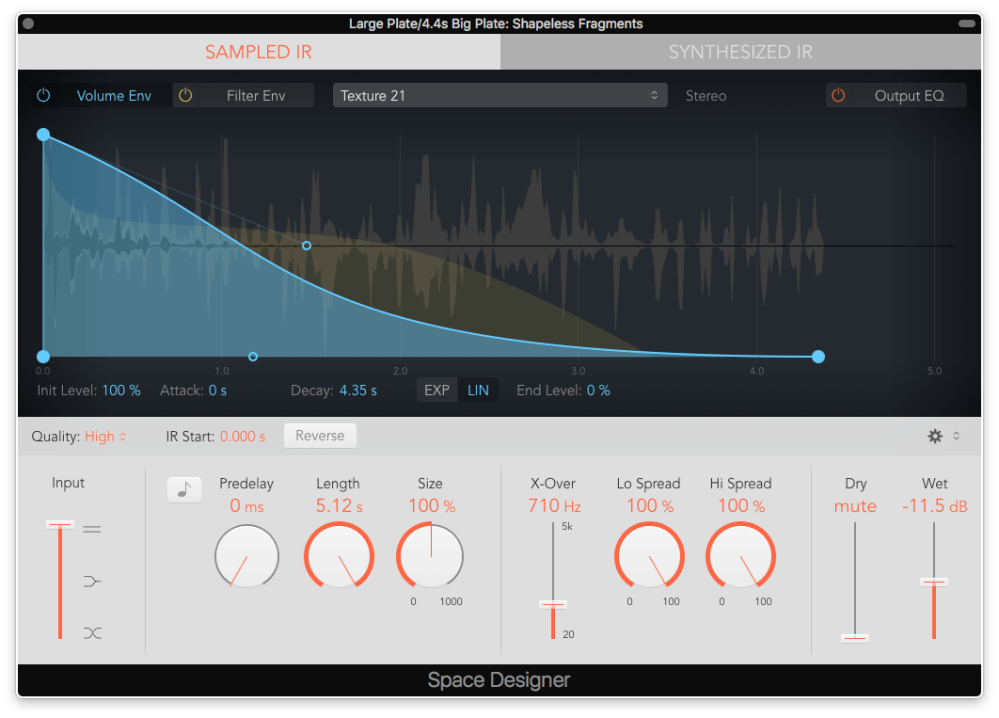 Seeing as how we mentioned Space Designer already a few times, you’ll likely have noticed from our launch coverage that it got a complete visual overall for version 10.4. It is very much designed after the look and feel of ChromaVerb and wow, does it look much better than it used to. And you can get a full in-depth look at Apple’s Space Designer (pre-makeover) right here.

Let us know in the comments below if you have had a chance to dig in with the new effects yet.