Apple continues to support Logic Pro X (and its other flagship software), and the latest update has even more than we expected after having some hands-on time for the last couple days. The completely free version 10.4 upgrade hit this week with loads of new content for the company’s professional audio recording suite. For those that may have missed our launch coverage, we aren’t just talking about enhancements and fixes here, this is new effects units and instruments along with nearly 1,000 new loops and sounds, among many other things.

Step FX and Phat FX are the two new multi-effects plug-ins available in Logic Pro X v10.4. After Apple acquired Camel Audio and its incredible Alchemy Software Instrument, it was only a matter of time before more of the amazing Camel products made their way into Logic Pro in one way or another. Enter Step FX and Phat FX.

Over the next little while we will be taking a deeper dive into the most exciting new elements of LPX, starting today with the multi-effects plugs… Step FX is essentially a plug-in that houses a series of FX with deep modulation and routing capabilities. You’ll also find an X/Y pad allowing for complex modulations and drastic shifts in your sound as well as 3 individual modulation sequencers. Both of which can very easily be routed to just about any parameter on any of the available effects units using simple drop-down menus.

The included FX modules are Delay, Reverb, Distortion, Mod FX (think chorus-like detune plus delay adjustments) and a trusty filter. There is also your standard Master Output module with Input and Output controls as well as a Mix knob to blend the result of the Step FX signal with the original or dry sound.

This is your basic and trusty resonant multi-mode filter here. There is everything from your basic 12/24db Low and High Pass options all the way to some very interesting filter types you’ll definitely want to try out. The Bitcrusher, Downsample, Mech and others found at the bottom of the drop-down menu are fantastically intersting offering up everything from chaotic harmonizations, to rigid, almost robotic resonance. The usual Low/High/Band pass stuff is usually my go-to in most situations when it comes to sound design or not, but it is very refreshing to see Apple throw some wacky stuff in to keep things exciting.

Along the bottom of the user interface (this applies to both Step FX and Phat FX), there are small rectangular blocks for each of the main sound modules on the unit. This is not just to show you which of them are currently activated (units bypassed get greyed out down here), but you can also drag and drop to rearrange the signal chain. Altering the order can drastically change the result of the patch and can result in some very (and sometimes not so. lol) interesting sounds.

One thing to keep in mind here is the Exciter and Dirt parameters on the Distortion module are essentially treated as separate effects. So they appear as separate blocks along the bottom of the UI in the routing section. Also on that note, the Pan and Gate settings are only found in the sequencer drop-down menus (more on that below), they do not have their own FX module like the others.

Step FX has three built-in modulation sequencers as well. Each of of which can be routed to modulate (or automatically move) just about any parameter on any FX module. This is where the machine really shines in my opinion. Not only do we get your standard rate and depth controls, but also a swing parameter. Each sequencer has a dedicated envelope that allows us to fine-tune the movement of the modulations to suit our tastes.

On top of that we can modulate on a step-by-step basis using the blue graphic display along the bottom. Apple has provided a nice list of preset sequencer curves from basic LFO-like settings to weird ramps and rolling patterns. This can turn basic, held chords, for example, into a choppy rhythmic patch, or create subtle movement for more ambient approaches. The preset sequencer curves offer up some very interesting rhythmic possibilities. As opposed to simple filter cutoff moves from a typical LFO, we can pump the cutoff in very specific syncopated patterns.

And lastly we have the X/Y Pad. We can have up to 4 parameters assigned to the X/Y Pad and then automate from there. This just adds another layer of sonic possibilities and can be a great way to create movement on top of the sound you have already made using the sequencers and effects modules. It would have been nice to have the X/Y Pad available to us as a modulation “Target” on the sequencers, but that doesn’t appear to be possible.

So far I found Step FX to be quite useful for both music projects and with sound design work in post-production situations. You can turn a simple piano sample, for example, into some kind of otherworldly texture in minutes, with full tempo sync over delay times and a fully automatable X/Y Pad for moment-to-moment swells and the like. 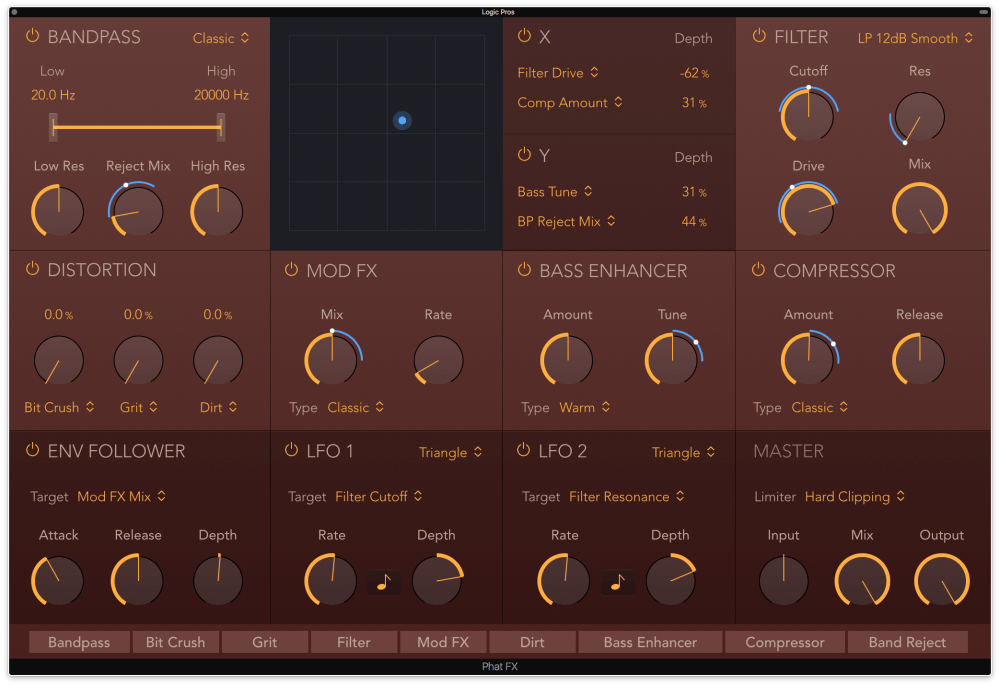 Phat FX follows a very similar design structure and overall lay out as Step FX. It is once again a single plug that houses a series of FX with a built-in X/Y Pad, a pair of LFOs and an Envelope Follower for modulation. Step FX is more for rhythmic and spacial sounds, whereas Phat FX brings warm saturation and pounding distortion to your tracks.

As you can see in the image above, we can once again adjust the routing order along the bottom, but we don’t have the sequencer modulation and there is a different set of FX in place here.

This time around we are getting a dedicated BandPass filter as well as the same filter found on the Step FX (but with a new Drive control), a much deeper Distortion module, Bass Enhancer, Compressor, basic Mod FX and a Master Output Limiter.

Just like the Step FX, keep an eye on those drop-down menus. Not only for modulation routing, the drop-down menus found on each FX module contain lots of interesting goodies.

Phat FX includes a much deeper distortion module with 3 discreet circuits that can be run simultaneously. Each of which can also be selected as modulation targets on the LFOs. You’ll find everything from Soft Distortion and Tubes to Downsampling and more. The main Filter has all of the same filter-types as the Step FX. The Compressor and Master modules have a large selection of flavors that come straight from Logic Pro X’s recently revamped built-in compressor.

For the most part, the explanation here is very much the same as the Step FX, but you’ll some notable differences below to watch out for.

The first major difference between the two is that we have traded out the sequencer laden modulation on the Step FX for a pair of traditional LFOs and an Envelope Follower. You’ll find all the usual shape types here as well as some interesting Random options on the LFOs. Once again we can modulate just about any parameter on the UI by ripping through the simple “Target” drop-down menu. That little music note icon found on each LFO will toggle the sync settings for the rate parameter (synced to project tempo or free running).

Personally, it would have been nice to be able to route the LFOs to one another (and the X/YPad as mentioned above), but that is not the case. Nonetheless, Apple has implemented a very simple and yet powerful modulation routing system here, that I would easily put up at the top of my list of favorites. It easily one of the most intuitive out there.

Phat FX hasn’t been quite as exciting for me as Step thus far, but I have gotten some monstrous sounds out of it. I also find it to be quite a useful saturation tool, adding that almost subtle analog feel to otherwise “MIDI” sounding instruments. Its Distortion module might the most powerful in its category when it comes to the stock Logic options at this point in my opinion. 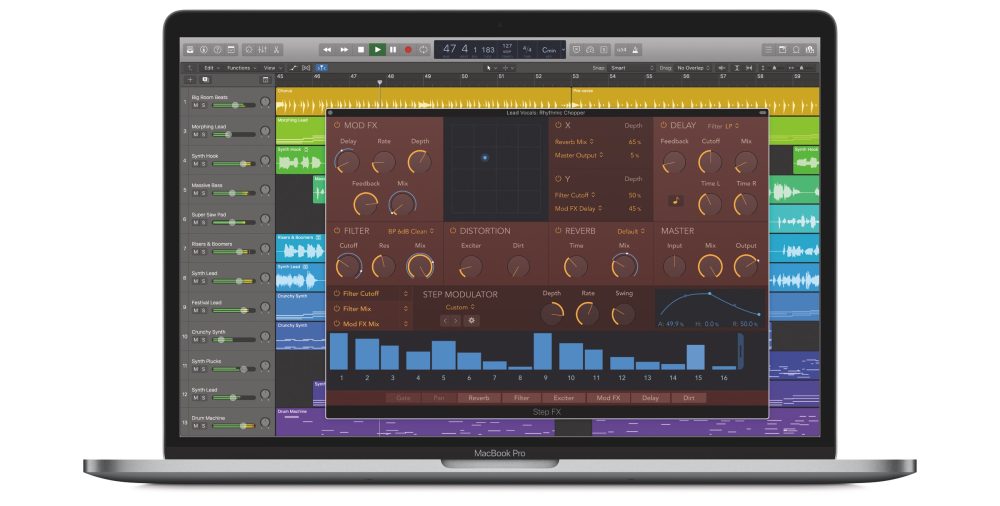 So far I can easily say Step and Phat FX are more than welcomed additions to my Logic Pro X arsenal. I can’t wait to dive in even deeper over the next several months on various projects to see what other wonders might come out of them.

Let us know in the comments below if you have had a chance to dig in with the new effects yet.