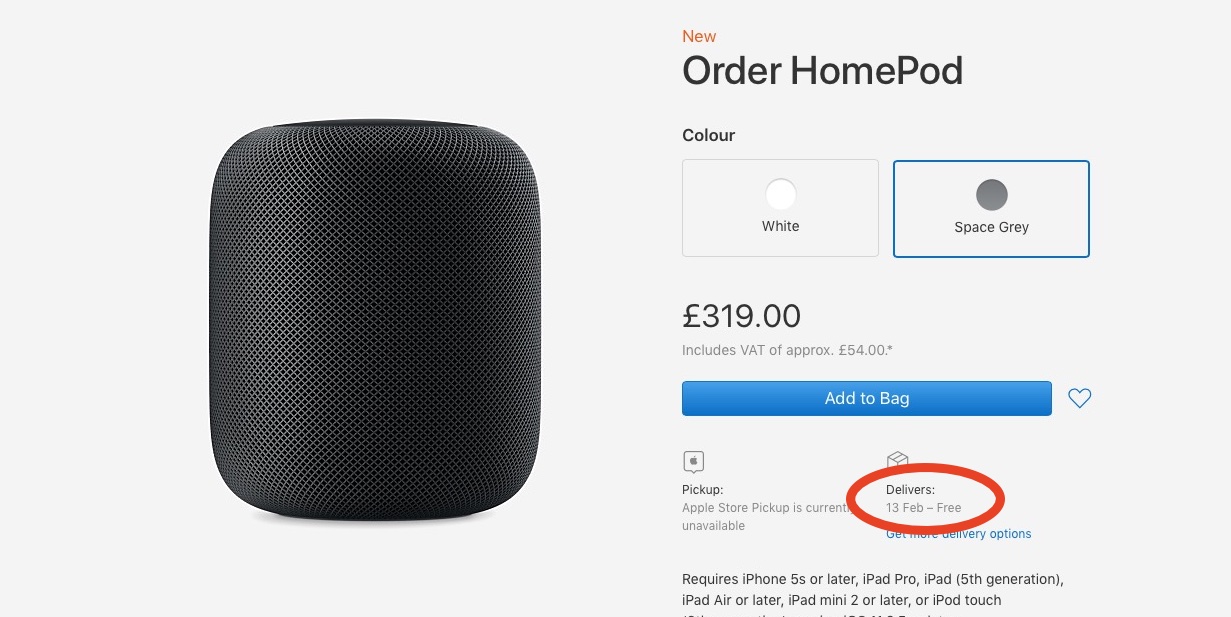 Apple’s HomePod smart speaker (Apple, Best Buy) launches this Friday in the United States, United Kingdom and Australia. Preorders have been available on Apple’s Online Store for more than a week and we are now starting to see launch stock twinkle.

In the UK, Apple has now sold out of launch-day deliveries of HomePod in Space Gray and White, with new orders estimated to be shipped by the 13th. US and Australia stores are still reporting 9 Feb availability as of this morning.

The HomePod is a hotly anticipated entrant into the smart speaker arena although it’s market reception is still up in the air.

Apple’s $349 speaker enters at the more expensive end of the spectrum focusing on premium audio and home music. The HomePod uses a seven tweeter array and internal subwoofer combined with advanced audio processing to create a deep ‘soundstage’ when used. The HomePod can sense the room it is in and optimizes how it projects sound to maximise audio quality.

Early hands on with HomePod suggest it does deliver on sound quality, generally beating out competitors like the Sonos One and Google Home Max, but the embargo for full reviews of HomePod is yet to lift.

The HomePod’s price point has been criticized (although let’s be frank this is nothing new as far as Apple products are concerned). The Google Home Max is actually more expensive at $399, but the Sonos One is only $200.

Whilst Apple focuses on music, the popularity of Amazon Echo and Google Home has been powered by the voice assistant intelligence, like Alexa. Many doubt that Siri is up to scratch in this area and its unclear how many customers care enough about sound to shell out for the best music experience. The Amazon Echo with ‘improved sound’ is less than $100.

These questions will play out in time and it’ll be interesting to see how HomePod is received. Selling out of initial stock in the UK already suggests some level of success, and we would expect shipping dates in other regions to also slip. In-store pickup availability in the United States is already dwindling.