Before HomePod: History of the short-lived iPod Hi-Fi 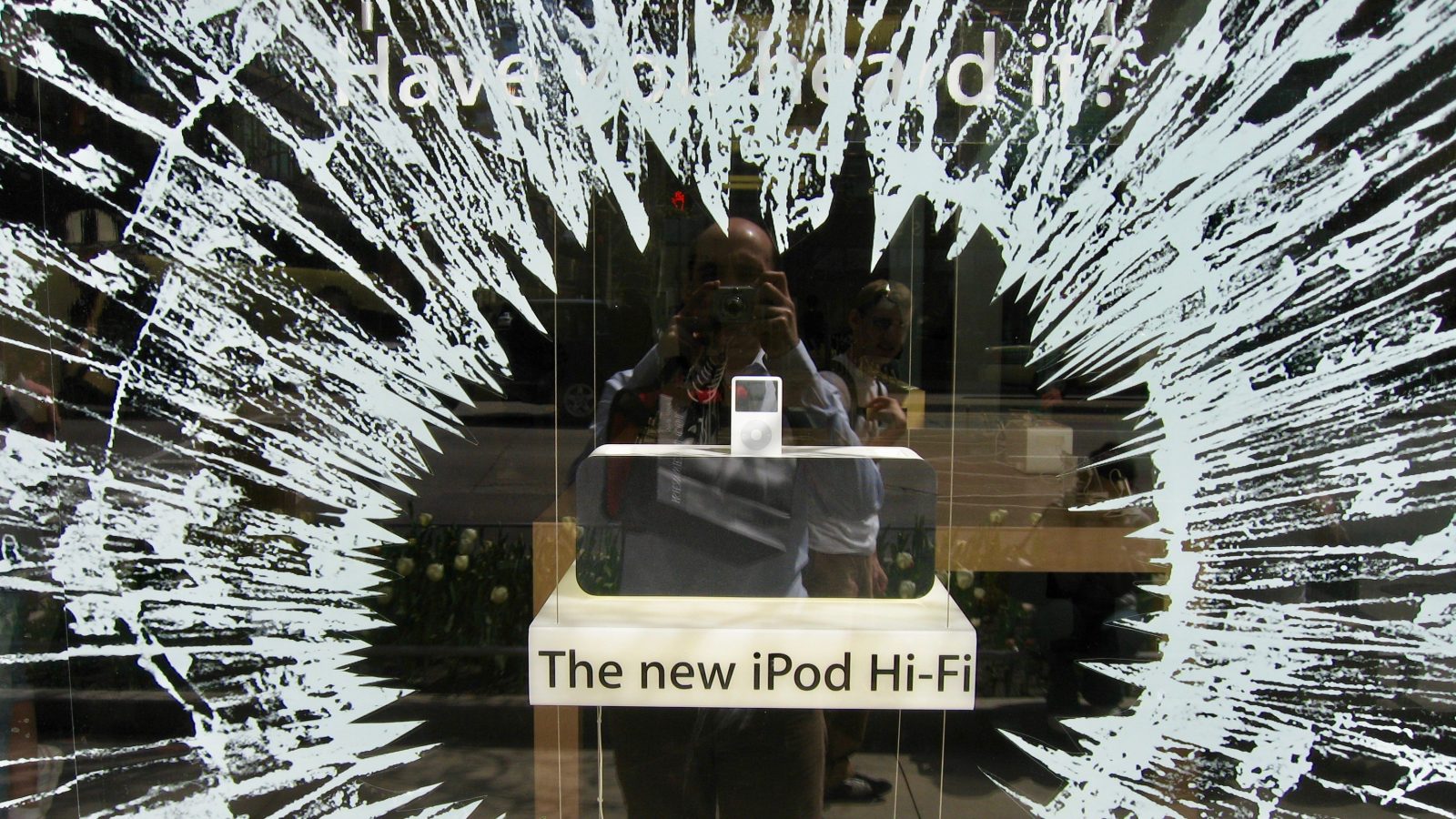 The reviews are in and HomePod is finally here, but let’s take one last look at Apple’s short-lived home speaker from 2006, the iPod Hi-Fi. The similarities between the two launches are deeply similar, although I think the timing of HomePod’s launch suggests it won’t face the same fate as iPod Hi-Fi anytime soon.

“We’ve got some fun things to introduce today. Sort of some medium scale things. But all of us want every single one of them so we hope our customers do too.”

That’s how Steve Jobs opened the keynote nearly 12 years ago. What followed was announcing the first Intel-based Mac mini, $99 leather iPod cases, and the $349 iPod Hi-Fi. With a low-key launch, Apple unveiled its first home speaker designed to compete with Bose and other home speakers with built-in iPod docks.

Jobs plainly argued that existing home speakers with iPod docks didn’t offer the quality that compelled you to throw out your existing home stereo. With iPod Hi-Fi, Jobs said, his expensive home stereo system was actually being replaced. 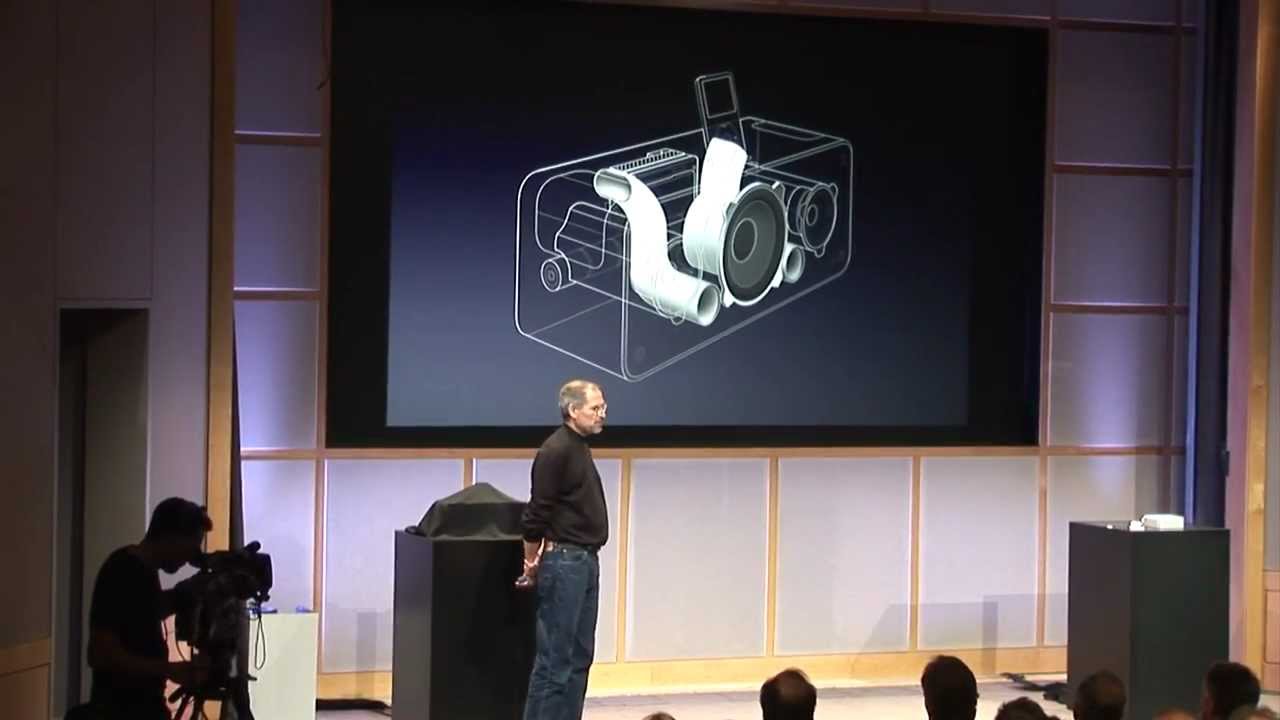 The context of this Stevenote is remarkable historically: less than one year later, Apple would ‘reinvent the phone with iPhone’ and iPod Hi-Fi would exit the market completely. iPhone and iPod Hi-Fi only shared four months of co-existence.

The keynote is a must-watch piece of Apple history. There’s even a fun bit where Jobs promises a future software update for iPod to feature album art when docked to iPod Hi-Fi with a brief mix-up about when it was shipping. It wasn’t the most rehearsed event. Linked is the iPod Hi-Fi intro, but rewind to the beginning to catch the whole half hour.

My former colleague Jeremy Horwitz, who now writes for VentureBeat, attended the event for iLounge in 2006. Jeremy kindly shared his recollection of his sense of the room at the time:

There are two reasons I vividly recall the iPod Hi-Fi introduction. First, it’s where Apple first trotted out the “reinventing home audio” pitch it’s using now for the HomePod — the keynote language and a lot of the press release language is amazingly similar. The iPod Hi-Fi demo areas inside Apple were distinctively made to resemble in-house environments, rather than the current Apple strategy, which is to just rent and deck out actual apartments with HomePods.

Second, it was the first keynote where I remember audience members actively registering disagreement with Steve Jobs’ amazing sales pitch — but only during the part where $99 leather cases were introduced for the iPod nano and iPod. I seem to recall muffled laughter and/or groans when the cases were shown. Neither the cases nor the speaker went over particularly well with critics. And unless I’m forgetting something, Apple didn’t do an accessory-focused keynote again after that experience.

For HomePod, Apple treated it as a sneak peek preview at the end of its Worldwide Developers Conference opening keynote, and HomePod never received a proper standalone event before launching (two months later than promised).

The official press release for HomePod, err… I mean iPod Hi-Fi, is also a piece of history. Over a decade later, the original iPod Hi-Fi announcement reads like an unfulfilled promise that HomePod may actually fulfill.

CUPERTINO, California—February 28, 2006—Apple® today announced iPod® Hi-Fi, an all-new high-fidelity speaker system that works seamlessly with the iPod to redefine the home stereo system. iPod Hi-Fi delivers breathtaking acoustic performance and room-filling sound unlike any other speaker system designed for the iPod in an innovative, all-in-one design that can be powered from a wall socket or by six D-cell batteries. iPod Hi-Fi is easily controlled by the Apple Remote for an amazing stereo experience in any room in the house.

“Apple is reinventing the home stereo with the new iPod Hi-Fi, the first iPod accessory that adds true high-fidelity sound quality to the iPod,” said Steve Jobs, Apple’s CEO. “iPod Hi-Fi’s unrivaled acoustic performance and stunning design is at home in any room in the house.”

iPod Hi-Fi has been designed and engineered by Apple to deliver unrivaled sound quality, realistic sound imaging and optimal audio performance. Its clean, all-in-one design features a unique isolated enclosure system that includes two custom designed wide-range speakers and a tuned, ported bass system, minimizing vibration while maximizing sound quality and allowing users to listen to their favorite music as it was intended with amazing sound clarity and rich, deep bass. iPod Hi-Fi features handles to easily transport your stereo anywhere, a removable front grille with precision-mounting clips, touch-sensitive volume control buttons, the Apple Remote for easy song and volume control from anywhere in the room, a universal power supply incorporated into the all-in-one design so there’s no bulky power brick to weigh it down, and the ability to power iPod Hi-Fi from six D-cell batteries for true portability.

Featuring seamless integration with all iPods with a dock connector, iPod Hi-Fi automatically recharges your iPod while docked and displays features of iPod that maximize the iPod Hi-Fi experience such as Tone Control, Large Album Art mode and volume mirroring.* iPod Hi-Fi includes a dual-purpose 3.5-mm auxiliary input that accepts either analog or digital signals for easy connection to a wide range of audio sources. iPod Hi-Fi is compact and can be powered by AC or six D-cell batteries, providing more flexibility than any traditional home stereo and is perfect for use not only at home, but just about anywhere you go without compromising sound quality.

Apple today also announced new luxurious leather cases designed specifically for the fifth generation iPod and iPod nano models. The Leather Case for iPod is made with fine, hand-crafted Italian leather and features a soft and durable interior lining for a secure fit, making it the perfect carrying case for iPod or iPod nano.

Pricing & Availability iPod Hi-Fi includes the Apple Remote, a removable grille, an AC power cord and 10 Universal Dock adapters, and is available for $349 (US). The Leather Case for iPod is available in 30GB and 60GB models as well as an iPod nano model, each for $99 (US). iPod Hi-Fi and all models of the Leather Case for iPod are available through the Apple Store® (www.apple.com), Apple’s retail stores and Apple Authorized Resellers.

Apple ignited the personal computer revolution in the 1970s with the Apple II and reinvented the personal computer in the 1980s with the Macintosh. Today, Apple continues to lead the industry in innovation with its award-winning desktop and notebook computers, OS X operating system, and iLife and professional applications. Apple is also spearheading the digital music revolution with its iPod portable music players and iTunes online music store.

We’ve seen the initial HomePod reviews, and the biggest complaints are no line-in option and direct Spotify streaming. HomePod is first and foremost an Apple Music (and Apple audio) player.

So how did iPod Hi-Fi perform in the press? Dan Frakes captured the debut in his Macworld piece at the time:

It seems many people are opposed to the very idea of the iPod Hi-Fi; more than once I heard or read the phrase “Why would anyone waste $350 on this thing?” (Of course, nearly all of these comments were made by people who had never even seen the Hi-Fi in person.)

Granted, Apple set themselves up for a measure of such abuse by introducing the Hi-Fi as an “audiophile”-grade system that will “redefine” the home stereo system, when it’s really a bookshelf-style speaker system—albeit one that can run off batteries—that attempts to improve on some of the more popular existing systems on the market. These include Bose’s $300SoundDock, Klipsch’s $280 iGroove, ZVOX’s $300 (with bag and battery)ZVOX mini, Tivoli Audio’s $330 iSongBook, or even Altec Lansing’s $250inMotion iM7 and Cambridge SoundWorks’s $200 PlayDock MP3. (XtremeMac has also announced a similar system, the $200 Tango.)

That opener could be recycled in 2018 — even the price is the same — and the next bit works too. Just change the competitors to Amazon Echo, Google Home, Sonos, and Bluetooth speakers. 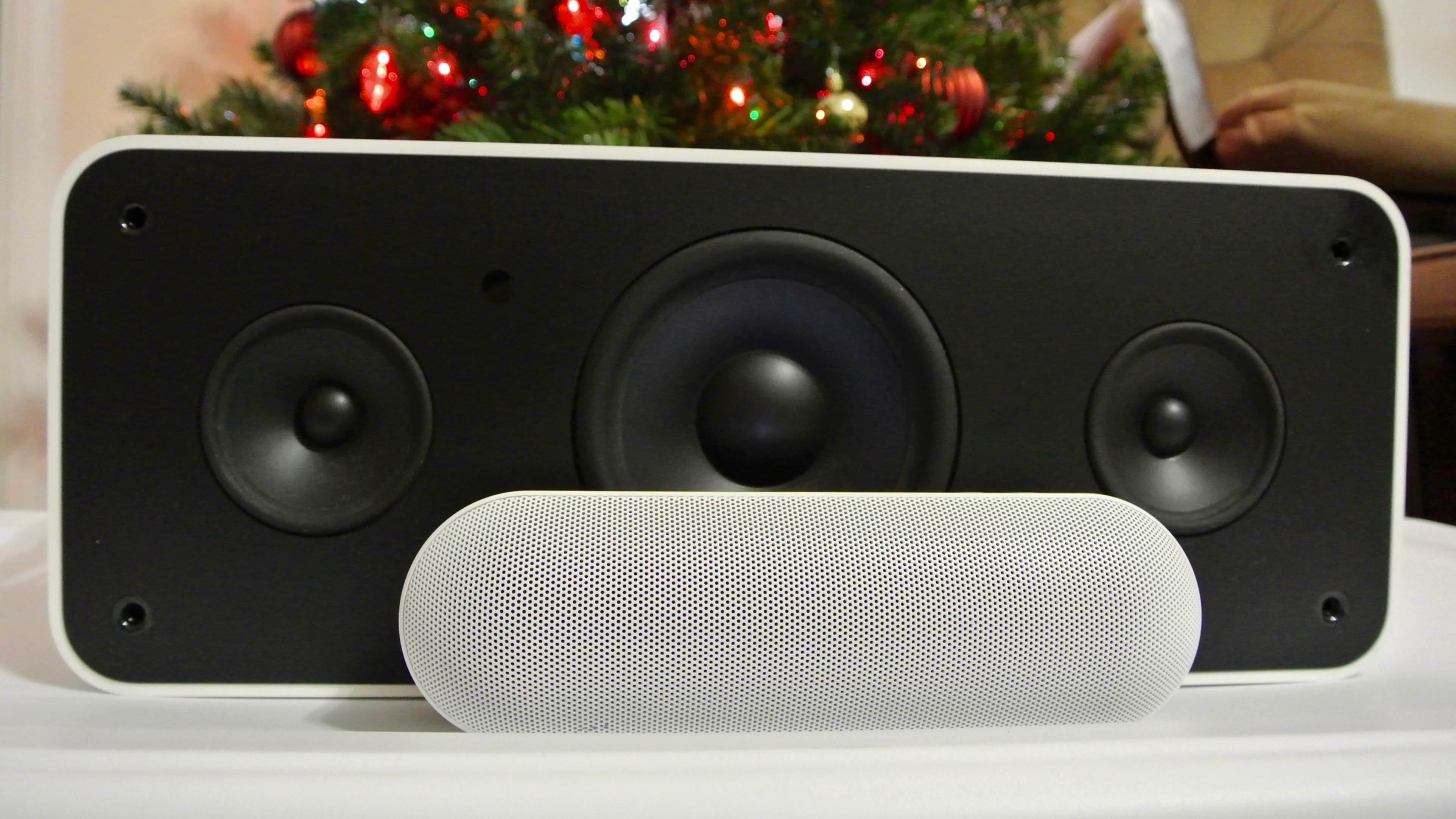 Jeremy Horwitz also documented the reception in his iPod Hi-Fi review for iLounge, summarized below:

I like this summary as it illustrates different strengths of the iPod Hi-Fi and different challenges for the HomePod. Despite the numerous parallels, HomePod isn’t exactly iPod Hi-Fi take two.

Fast-forward to today, and iPod Hi-Fi is still used by collectors around the world. My interest in iPod Hi-Fi started with Andrew Kim’s excellent photography of the speaker on his Minimally Minimal blog. My iPod Hi-Fi is sourced from a stranger on Facebook who was selling his for bicycle parts money.

The 30-pin dock connector is no longer useful for modern iPhones and iPods, but the line-in port on the back (originally intended for iPod shuffle playback) helps iPod Hi-Fi remain compatible post-iPod.

iPod Hi-Fi accepts audio from any source with line-out, and the speaker works with peer-to-peer AirPlay when connected to AirPort Express for streaming audio from iPhones, iPads, and Macs.

As the reviews flagged at the time, the option to make iPod Hi-Fi portable with six D batteries (which aren’t light) is not very practical, but the short-lived home speaker serves as a practical audio solution for Apple product collectors.

HomePod and iPod Hi-Fi absolutely share similar goals of offering the best home audio experience for music playback, but the delivery method has changed. The iPod is no longer how we carry music with us, and frankly neither is the iPhone, at least not exclusively.

Music has moved to the cloud and streams directly to our phones, tablets, TVs, watches, and home speakers. HomePod embraces that and relies on voice control primarily as the controller — the only leap forward I can imagine is just thinking about what you want to hear and playing it.

As for the fate of HomePod, I do not predict a short lifespan like that of the iPod Hi-Fi. Apple’s speaker a decade ago mostly served as Apple’s attempt at taking a piece of a market it helped create — speakers with iPod docks — and that was a hefty target, easy to miss.

HomePod doesn’t have to sell in astronomical numbers to be successful, and it doesn’t need to put its competitors out of business. Apple’s smart speaker can have multiple effects: growing Apple Music subscribers, boosting Siri’s presence in the home, and encouraging iPhone and iPad lock in.

Those are all impacts it can have that won’t reflect directly in HomePod sales numbers necessarily, but may show indirectly in the long-term. HomePod can afford to linger for a while without being axed if it’s not a global hit.

Ultimately, iPod Hi-Fi was just introduced at the absolute wrong time in Apple’s history for it to be successful. If it had followed months after the original iPod, it may have been as sticky as iTunes. Instead, it debuted less than a year before the iPod was set to be on a path to extinction itself thanks to the iPhone.

With the introduction of the revolutionary iPhone came a need for revolutionary new speakers to match — HomePod is undeniably late to the smart speaker market even by its own expectations, but it’s still early days for smart speakers. iPod Hi-Fi, to contrast, was introduced near the end of the era of speakers with built-in iPod docks.