Apple doesn’t advertise HomePod as a TV speaker in any of its marketing, but it’s a question we’ve gotten a lot over the past couple weeks. With AirPlay, it’s very possible to connect HomePod to Apple TV and use it as your TV speaker … with some caveats and drawbacks to consider.

For some people, it may make sense to do it. I think for many it won’t. However, there are some tips and tricks to make using HomePod with Apple TV a better experience …

For people who already have dedicated hifi speaker systems for their television, connecting up a HomePod probably doesn’t give you anything better than what you already have. After all, it’s meant as a convenient music speaker for the kitchen or a bedroom or a living area.

A HomePod will sound better than the internal speakers of a television set, the problem is connecting it. You’ll need an Apple TV for a start; either the fourth-generation 2015 Apple TV or fifth-generation 4K Apple TV from 2017.

How to use HomePod with Apple TV

To connect HomePod to Apple TV, you need to use AirPlay. There are several ways to connect to AirPlay speakers in tvOS. You can obviously navigate through Settings … but luckily Apple TV includes a couple of shortcuts to make this easier. 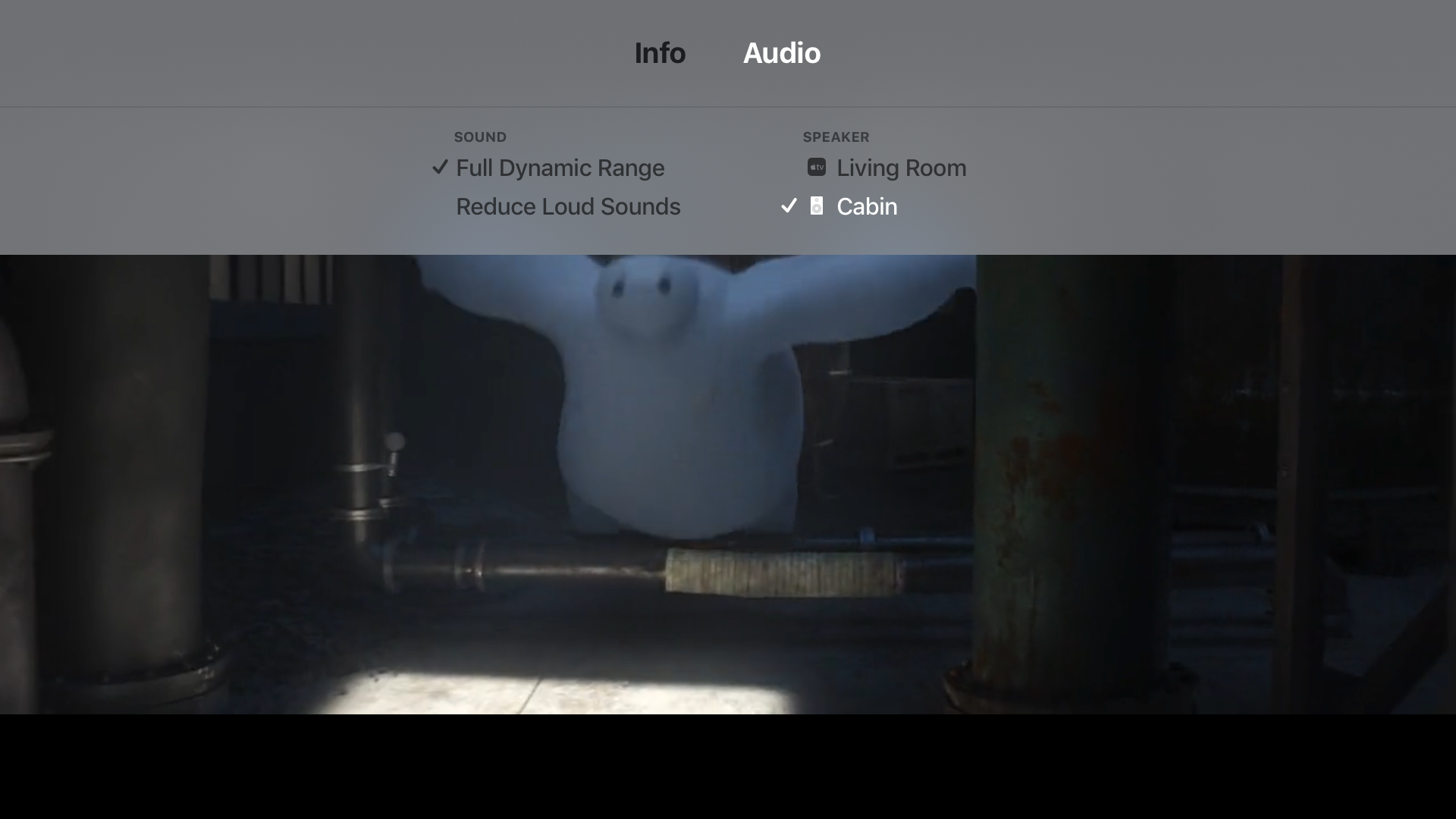 Swipe down to reveal the info panel. Use Siri Remote to select the HomePod in the Audio menu.

For apps that use the system video player (most of them), you can simply swipe down to reveal the info panel and slide across to Audio. The HomePod will appear as an audio output.

If you aren’t playing content, you can connect to HomePod with a new shortcut introduced in tvOS 11. From the home screen, just hold down the play/pause button on the Siri Remote. 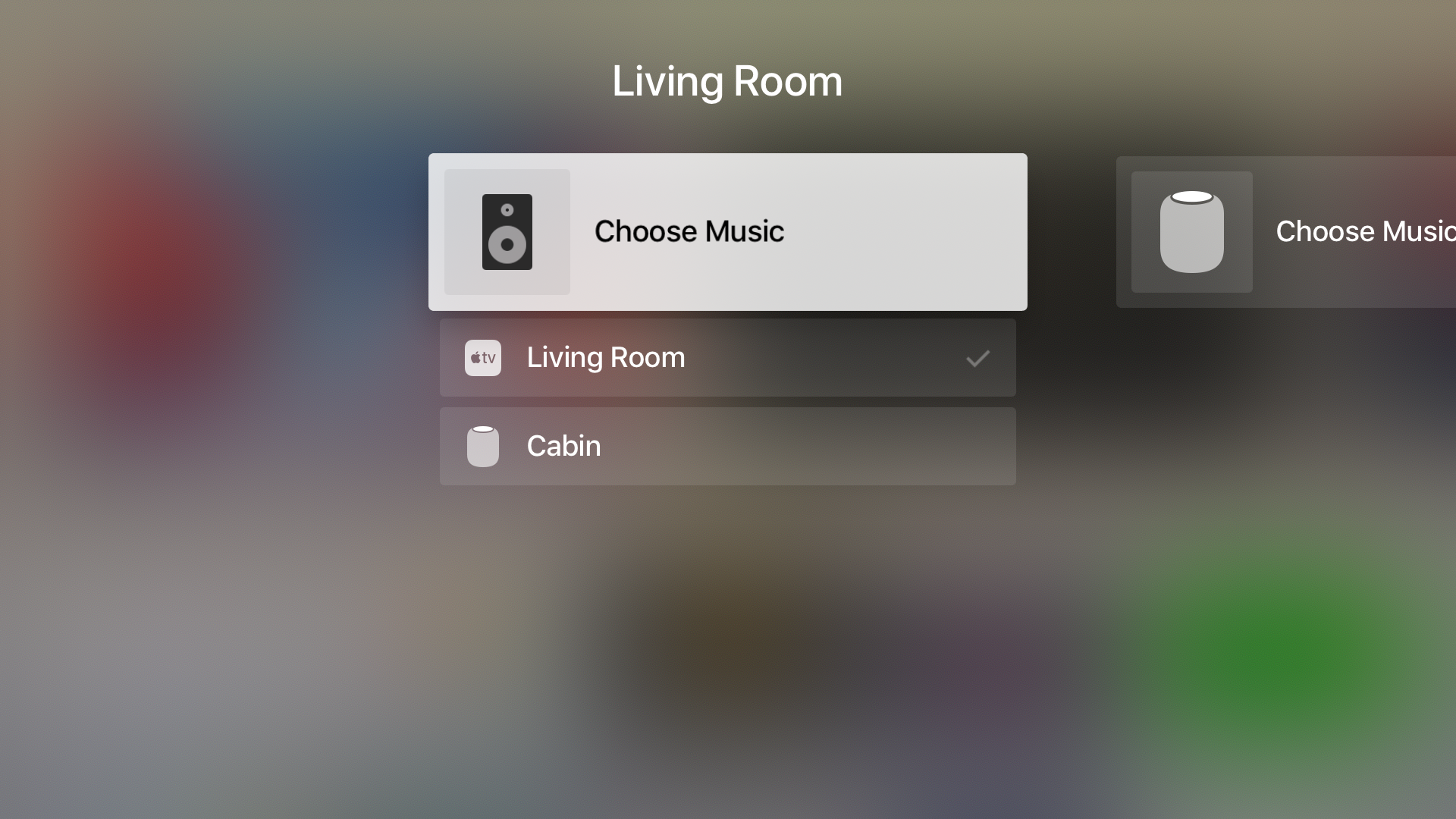 From the home screen, hold down the Play/Pause button to reveal this AirPlay menu.

This new AirPlay Audio Sources screen appears. It will show all the speakers and Apple TVs in your home. From here, it takes just a second to scroll down and set the HomePod as the output for the current Apple TV.

How well does it work?

Using HomePod with Apple TV is definitely feasible, but there are some drawbacks that explain why Apple isn’t promoting it as a TV speaker necessarily. For a start, the lack of wired inputs means you can only use HomePod with Apple TV. Other inputs on your TV will need to use other speakers for sound. Some cable-cutters really can get away with just using an Apple TV as their only set-top box. For me, I could use HomePod for my Apple TV content and rely on the TV’s internal speakers for other channels as a fallback.

If that limitation is a deal breaker, you should stop reading now. You should consider something like a Sonos Playbar, which is designed for this kind of use (and will eventually support AirPlay 2 later).

With that in mind, there are some other gotchas to look out for. AirPlay wireless protocol has an inherent lag, a couple of seconds, due to network latency.

Apple TV compensates for this in some contexts. Any app that uses native media players (like iTunes Movies, Plex and many more) the onscreen video was synced up to the audio almost exactly. tvOS delays the video frames to account for the 2-second delay in sending the audio. When pausing and skipping between points in the video, the UI freezes whilst it waits for the HomePod to be in sync again. 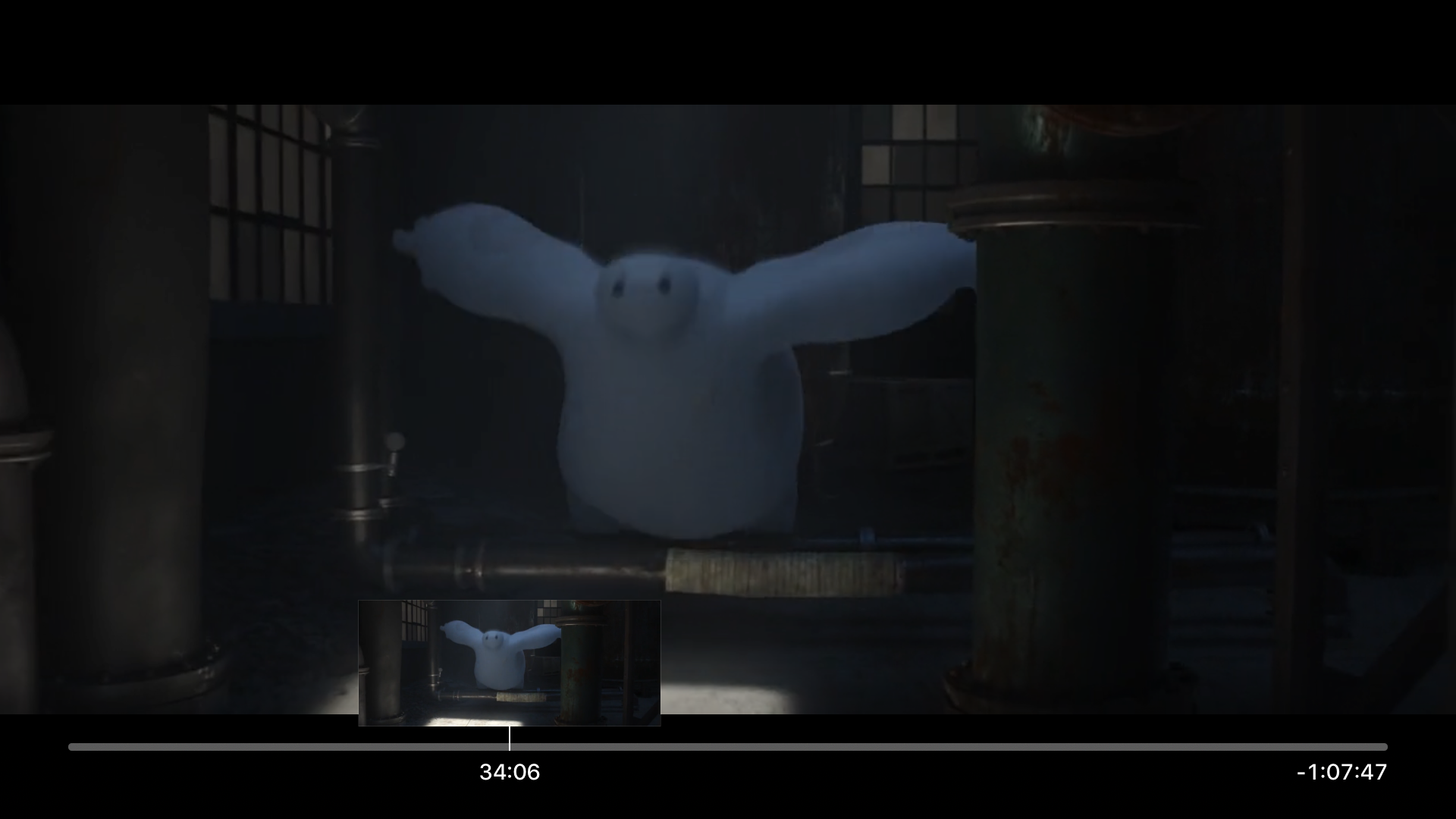 You’ll have to wait slightly longer than normal when skipping through a video, connected to AirPlay.

When using custom apps like games that require continuous interaction, the lag is unavoidable. If you are one of the few people who play a lot of games on Apple TV, don’t think about using a HomePod with it. Audio response to any input is simply delayed too much.

The other big thing to think about when using Apple TV with HomePod is whether the HomePod is only going to be used as a TV speaker, or if you still want to use the smart speaker capabilities of HomePod regularly.

If you are AirPlay connected to HomePod on Apple TV, and then ask the HomePod certain things like ‘play some music’ the TV sound is interrupted and replaced by the playlist. When you stop playing music, the Apple TV does not always automatically reconnect with the HomePod. It does sometimes, but not always. I haven’t quite worked out a pattern here.

In these cases, you need to dive back into the Audio options and reselect HomePod as the sound output. In the HomePod settings in the Home app, you can disable ‘Hey Siri’ functionality altogether which may be what you want for your ‘TV’ HomePod.

Also, if you think you can use the Hey Siri features of HomePod to navigate the Apple TV, you are probably not in the target market here. Siri on HomePod cannot replace the Siri Remote’s Siri features; you can do basic things like play and pause and adjust volume though with voice commands.

On the subject of volume, AirPlaying anything to HomePod seems to limit the maximum volume of the HomePod – including Apple TV output. At a guess, it only gets about 80% as loud compared to playing music directly from the HomePod with Siri. I’m not really sure why this is. It doesn’t make a meaningful difference in usability. 100% volume on HomePod is overkill for almost everyone, very few people will use HomePod at that volume level. The (inexplicably-limited) maximum AirPlay volume is loud enough. 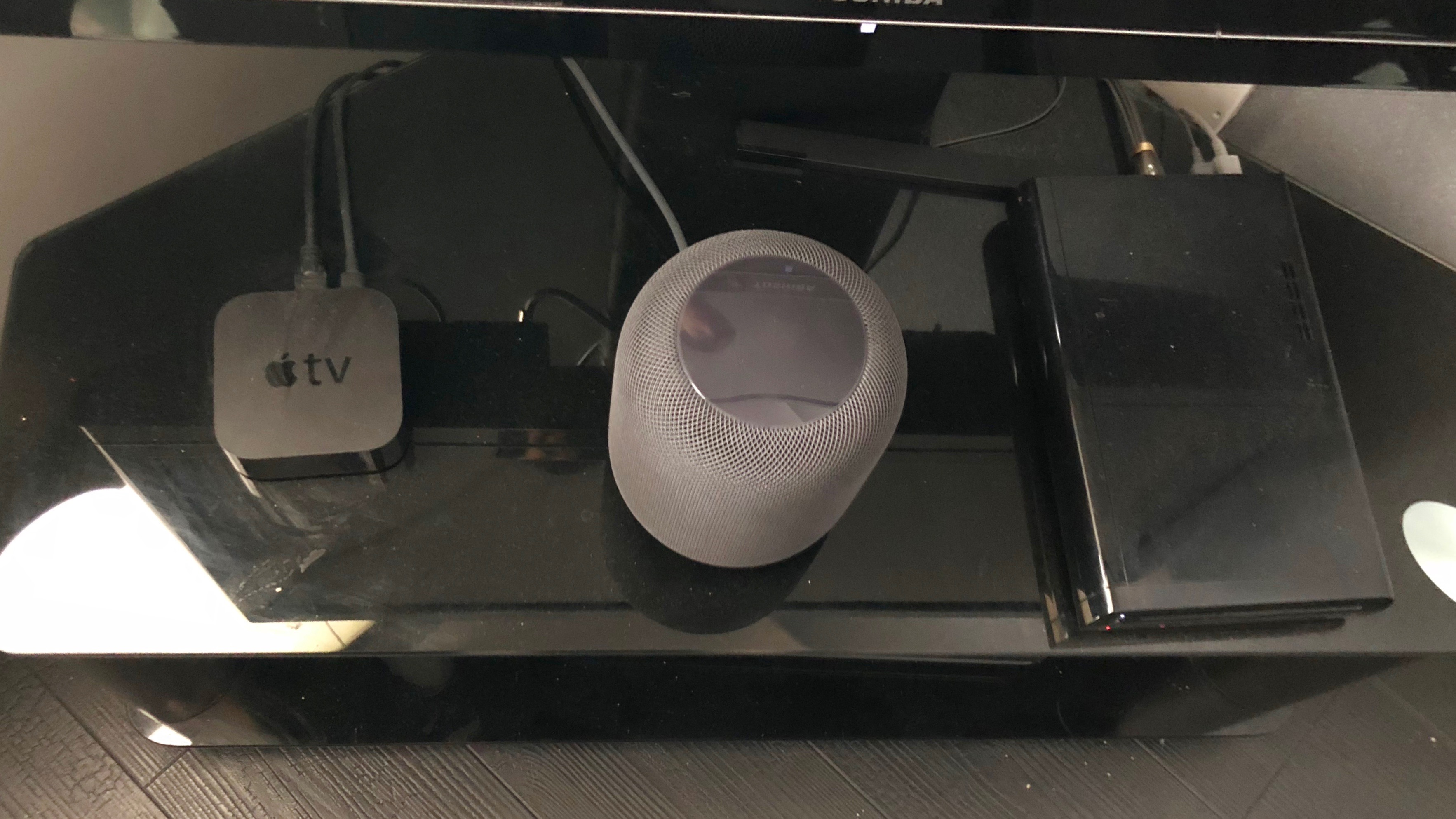 If anything, HomePod fits in neatly on a TV stand.

If you are on a budget or live in a smaller home like a flat or apartment, it may make sense to have HomePod as the only speakers in your house. It does feel a bit redundant to have a HomePod sitting next to a home hifi system that is connected to the TV. So for some people, Apple TV and HomePod interoperability will be useful. This is certainly an edge-case rather than intended use of the device, though, as highlighted by the above drawbacks.

There are some potential things Apple could do to make Apple TV and HomePod work better together. The company has already announced stereo pairing coming soon, which may make 2 HomePods seriously compete as home theater audio alternatives. A future tvOS/HomePod software update could add a special ‘TV Mode’ which means it doesn’t lose the AirPlay connection as frequently, and allows the voice input from HomePod to be used as the Apple TV’s Siri receiver.

Whether these kind of features are on Apple’s roadmap is unknown. The company certainly has veered clear of associating Apple TV and HomePod in marketing to date. The version 1.0 is very much meant as a premium smart music player. It remains to be seen how quickly the software evolves.

Some people with certain setups and rooms will be very happy with Apple TV and HomePod as a combo. For me, it’s not quite good enough.