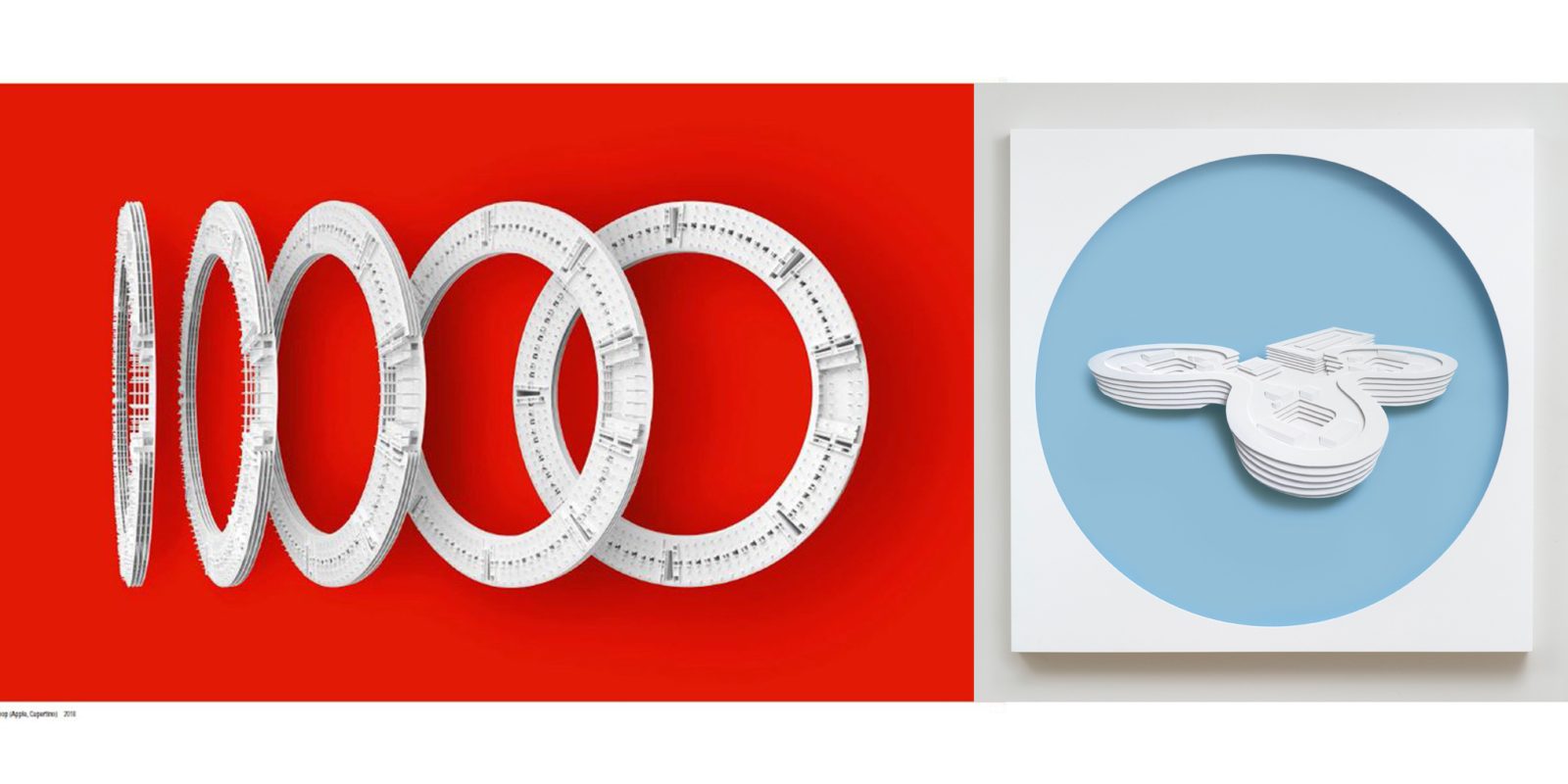 Apple’s new campus in Cupertino is being spotlighted at a new art exhibition opening in England today. Internet Giants : Masters of the Universe features iconic architecture of major technology companies around the world, including Apple Park and the nearby Central & Wolfe campus in Sunnyvale.

Artists Ben Langlands and Nikki Bell are the duo behind the project, and are marking 40 years of artistic partnership. The exhibition kicked off today at the Ikon Gallery in Birmingham, England with a tour by the artists. On display through June 10th, the reception coincides with the opening of two other exhibits at the same venue.

Here’s how the Ikon Gallery describes the project:

Featuring the new iconic architecture of the global technology companies such as Apple, Facebook, Alibaba and Google, the exhibition includes a new series of relief sculptures, installations, digital animations and portraits that explore the increasingly profound influence they have on our lives in the age of ‘Big Data’.

One of the more popular displays in the exhibit is sure to be Langlands and Bell’s cross-section sculpture of Apple Park, based on architectural drawings from Foster + Partners, the building’s architects. Also featured is a sculpture of Apple’s “second spaceship” campus currently under construction in Sunnyvale, CA. Designed by architecture firm HOK, the Central and Wolfe campus has been leased by Apple and is just a short drive from Cupertino. Late last year, we brought you photos from the construction site.

Exhibition Opening day begins with a tour of the exhibition by artists #LanglandsandBell. #internetgiants #birmingham pic.twitter.com/WYsFY56dEY

Both sculptures are constructed of wood, aluminium, MDF, and acrylic, mounted in front of stark and vibrant blocks of color. The model of Apple Park was originally part of an exhibit called “Infinite Loop” which ran at London’s Alan Cristea gallery in 2017.

Alongside Apple’s campuses, a new model commissioned by the Ikon Gallery will highlight Google’s Charleston East facility currently under construction. An exhibition catalogue from Cornerhouse Publications and a commemorative print of Apple Sunnyvale are currently available for pre-order from the Ikon Gallery.

Apple has been the subject of several art installations in recent months, including a Foster + Partners architecture exhibit and book featuring Apple Park, as well as a gallery in Spain of the art that inspired the iPhone X’s wallpapers.