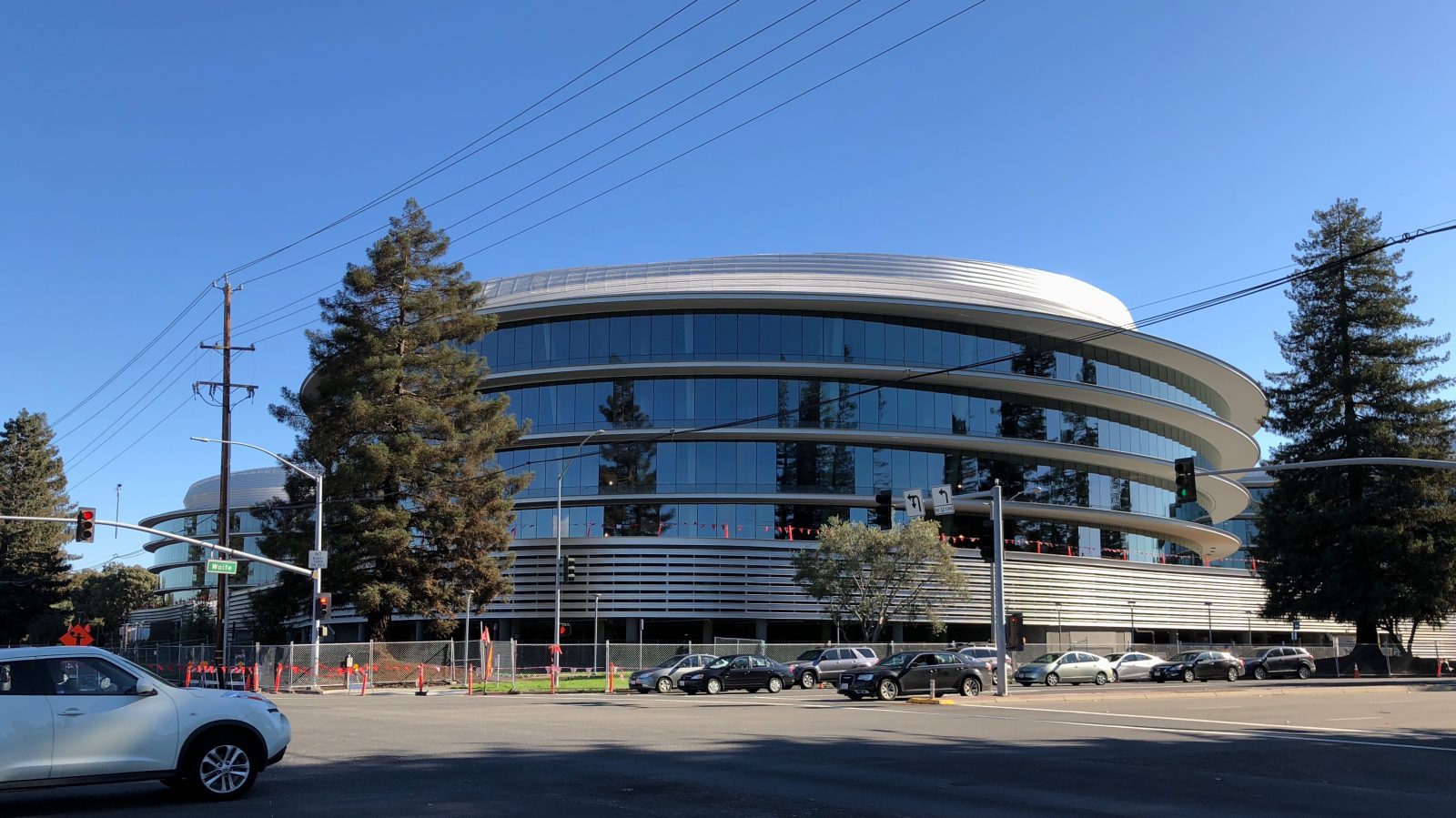 Less than five miles from Cupertino, nestled in the shadows of the newly-opened Apple Park, construction crews are quietly putting the finishing touches on another massive development project built under guidance from Apple. A striking architectural feat when viewed from any angle, Sunnyvale’s new “Central & Wolfe” campus will open in its doors to thousands of Apple employees in early 2018. 9to5Mac stopped by the future campus to see how the new buildings are shaping up.

Details of the new 18-acre Sunnyvale, CA campus were first revealed in late 2015, when Apple secured a deal with Landbank Investments LLC to lease a development located near the intersection of Central Expressway and Wolfe Road. Initial renderings revealed a collection of three sweeping, streamlined buildings reminiscent of a miniature Apple Park- or Campus 2, as it was then called.

Architecture firm HOK designed the project, reimagining the site previously occupied by ForteMedia. Before demolition of the property began in early 2016, a sign appeared on the outgoing office buildings advertising NotAnotherBox.com, a teaser site for the new campus. Development has progressed rapidly under the direction of Level 10 Construction, with supplier Cemex providing over 500 cubic yards of concrete every hour to the site during peak construction.

A render of the Central & Wolfe campus shows extensive landscaping and open space for employees.

As you approach the campus from the distance, the six-story structure is visible from blocks away. The undulating lines of the three main office spaces contrast sharply with low-slung neighboring buildings including a Lowe’s Home Improvement store, a fire station, and a gentleman’s club. Just a few blocks down the street, Apple fully leases the Sunnyvale Research Center. Just last week, the 224,000 sq. ft. facility was purchased by First American Exchange for $100 million.

At the construction site, the Central & Wolfe campus appears largely complete, aside from the chain link fence surrounding the property and dozens of construction workers walking around. Two sections of windows on the 770,000 sq. ft. facility have yet to be installed, providing a small glimpse inside. Just over a year ago, one construction worker at the site died after suffering injuries incurred by a 76-foot fall from the building’s sixth floor. A wrongful death lawsuit has been filed against Level 10 Construction by the worker’s family.

Similar to Apple Park, Central & Wolfe prioritizes sustainability, with two levels of parking located below the main office buildings in addition to a parking garage. This significant reduction in surface parking has contributed to the project’s LEED Platinum certification. Initial plans for the site included over 90,000 sq. ft. of rooftop gardens. Over two miles of walking and biking trails wrap through the site.

The ground floor of the complex and a standalone building are reserved to on-site amenities, which may include a cafeteria (likely a Caffè Macs), fitness center, conference center, and a 500-person sunken amphitheater. According to HOK, the campus will have an open floor plan, an increasingly common workplace layout for many Silicon Valley offices.

Throughout construction, several drone videos have documented progress made on the facility, including one by Level 10 Construction themselves. Drone footage of Apple Park became somewhat of a genre in itself during its construction process, overshadowing the work being completed in nearby Sunnyvale. Landscape architect Brian Jencek has recently posted several images on Twitter showing the landscaping and public spaces surrounding the new campus.

Level 10’s website lists November 2017 as the completion date for the facility, although the claim seems unlikely, judging by the amount of active construction still taking place. HOK suggests that more details will be available in early 2018. Take a look through the gallery below to see even more images of the new campus.