Making The Grade: Why Apple’s education strategy is not based on reality On Tuesday, Apple laid out its clearest vision of their education strategy to date. That strategy revolves completely around the iPad in classrooms. Apple is keeping the iPad at the center of everything it does in education. Read 9to5Mac‘s recap for a rundown on everything Apple announced yesterday, and read on for my take from a classroom IT management perspective.

I attended the event and ran the live blog for 9to5Mac. While writing the live blog, it was simply a matter of trying to keep up. Since there was no live stream, I was attempting to provide first-hand (lightning fast) details of what was being announced.

I didn’t have time to digest everything from the keynote until later. I discussed some quick observations on today’s 9to5Mac Daily episode recorded shortly after the keynote, but I still wanted some time to think about how this sets Apple up for the next three years or so.

While flying home from Chicago to Chattanooga, I turned off Overcast and put my AirPods in my bag so I could think. Based on the announcements this week, what did I think Apple is saying with their education strategy?

To start, I took some time to go back and watch the last education event in 2012.

The key thing Apple talked about then was the goal of reinventing the textbook. Apple announced iBooks 2 which introduced interactive books. Did they succeed in changing the world of textbooks? Hardly. In fact, no one has. I would argue they failed before they began.

The textbook market is controlled by a few of companies, and these companies weren’t interested in Apple managing the technology. Even the books that were available weren’t cost-effective for schools. Unlike apps, schools couldn’t buy a block of books and reuse them year to year.

Once books were assigned to an Apple ID, they were unable to be used again. This model is manageable for colleges and universities, but a typical K–12 school will take all of their books back up at the end of the year and reuse them the next year. A textbook might be in circulation for five years.

Apple then did a demo of iBooks Author. iBooks Author was a Mac-only application for building these interactive textbooks. Creating iBooks finally came to the iPad yesterday, but as a feature of the new Pages app for iPad. It’s not actually a total 1:1 replacement.

“Anyone can create stunning interactive books.”

Who’s anyone? Which teacher has time to make custom books for his or her class? One of the things I’ve become concerned about is the number of items we tend to keep adding to a teacher’s plate. They have to manage a classroom of 15–30 kids, understand all of the material they teach, learn all of the systems their school uses, handle discipline issues, grade papers, and help students learn.

When do we start to take things off of a teacher’s plates? When do we give them more hours in the day? Whatever Apple envisioned in 2012, it’s clear that did not play out.

The iBooks Author strategy was failed from the beginning. I think Apple should have bought a major textbook company to create great books for the iPad. Imagine if Apple had bought a major textbook publisher in 2012, recreated all of their books in iBooks Author, and released them for free on the App Store. How would that have changed the marketing message to schools: Buy textbooks for $X, or buy iPad for $X and get all of your textbooks for free.

Apple mentioned the $14.99 price point in their last education keynote, and that the students would own their digital books. They mentioned the publishers Apple was working with to create these books. The first flaw, as I mentioned earlier, is that the students often don’t need to retain ownership with physical books. If schools have to re-buy $14.99 digital textbooks every year for all students, the digital book buying process becomes more expensive very quickly (compared to physical books that might be used for five years). 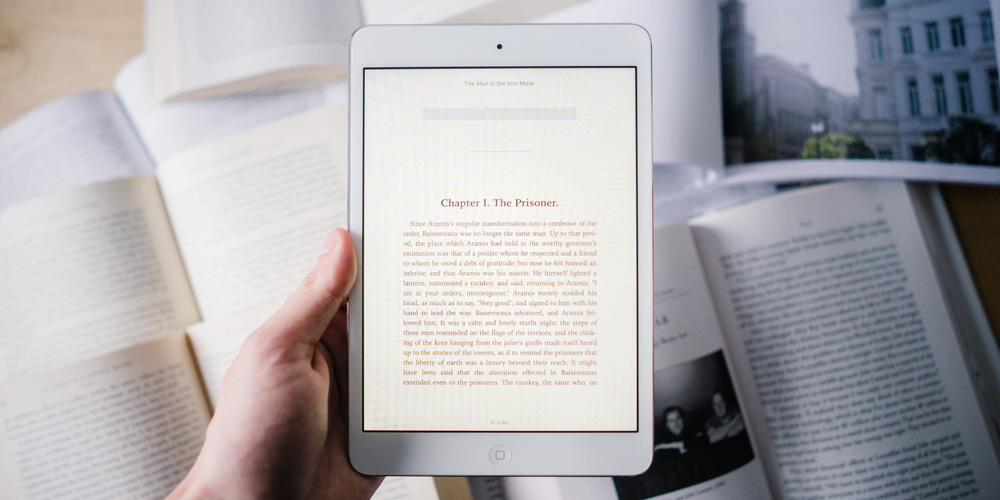 I follow Apple in education closely, and I haven’t heard a thing about iBooks textbooks in the real world in many years. I don’t know of a single school who has based their book-buying strategy on iBooks.

Eddie Cue was out next to talk about iTunes U at the education keynote in 2012. “We’re going to help teachers reinvent the curriculum. We want teachers to be able to create full online courses.”

This photo shows where iTunes U has ended up today after Apple’s vision for it in 2012 was shuffled into the Podcasts catalog last year: 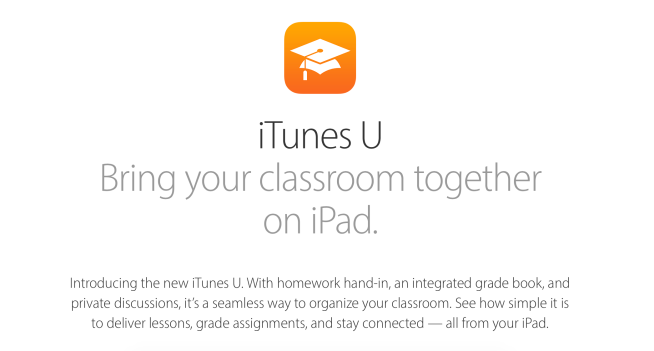 iTunes U is an iPad-only application, with a grade book that doesn’t connect to a student information system or a major learning management system.

What school district is basing key student data (grades) on iTunes U? How do I archive that data for 15 years? It’s a pie in the sky service that looks great on a marketing page, but I can’t see a reason a major school district would get behind iTunes U as a primary place to store data.

So here’s something to consider: how much from Apple’s 2012 education keynote has made a difference in the years since? I’d argue nearly nothing.

For me, that is an important thing to note as we look at the 2018 education keynote. If the 2012 strategy didn’t have any lasting impact, why will the 2018 edition be any different? Are the visions really that different?

After a two-hour flight, I settled on this for where we are today:

I think I’ve finally figured how to sum up my thoughts from today.

Tim mentioned they’ve been working in education for 40 years.

Book 1 was the Mac

Book 2 was the iPad. Today’s announcement is chapter 6 of book 2.

I’m looking for Book 3, and I hope it’s being worked on.

The desktop/laptop form factor was book 1. The iPad was book 2. And I’m waiting for book 3 which should primarily be based on services in the cloud. I love Apple, but the company is only a small part of my school’s technology stack in practice.

Renweb handles my student data (and offers a learning management system). G-Suite (Google) handles all of our email and document management. Right now Apple only provides the devices and the App Store for those devices, but not many of the services I need. Apple hypes that its all in on education. I want Apple to allow me to be all in on them. 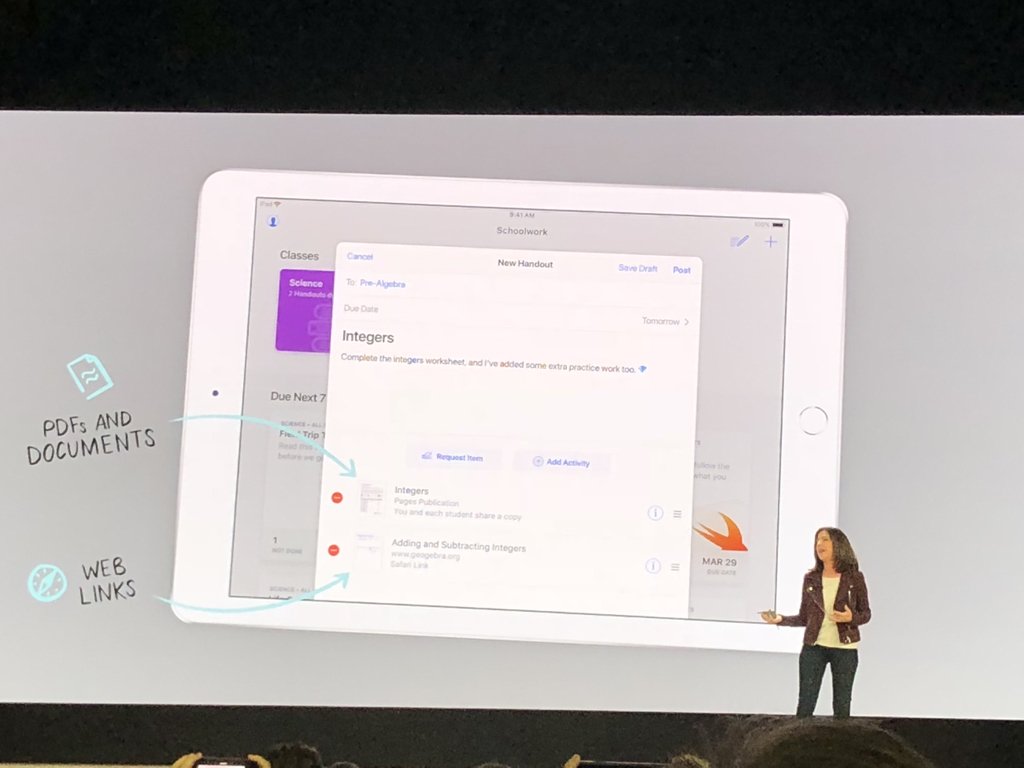 As I rewatched the 2012 keynote and pondered the 2018 keynote, I realized that Apple is yet again trying to craft a future for education that I am not sure fits with reality.

Some teachers will look at some of the new apps that Apple has created for educators, but will 50% of teachers in the US explore new solutions? I highly doubt it. Teaching is a hard job. Apple even had a video where students talked about how hard their teacher’s job was. Being a teacher can be a thankless job. Teachers put in a lot of hours outside the classroom for a salary that is less than they deserve. I’m not sure the average teacher is getting excited about another new app to learn (and then explain to students). 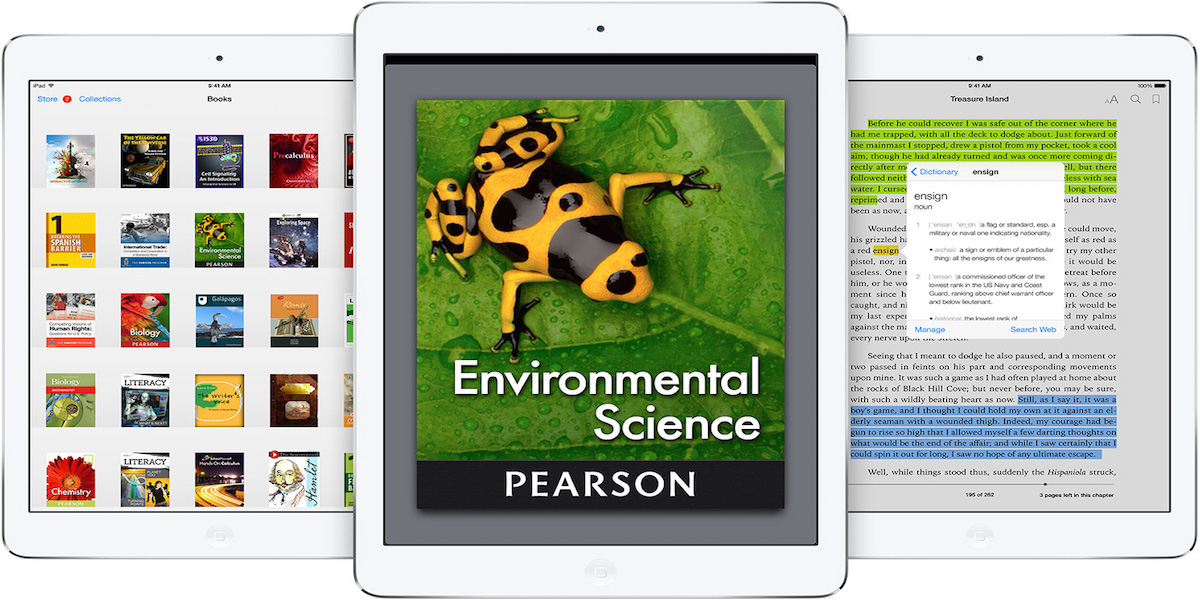 Apple’s latest education story is 100% based on that iPad which is the same price it was last year — with newly added Apple Pencil support. They’ve introduced more apps that still don’t fit into a school’s existing systems (SIS, LMS, etc).

Do you hear of any CIOs/CTOs getting excited about the Schoolwork app coming in June? Imagine if you are a school district CTO with 15,000 students. Is this something you are rolling out in August?

Like I said in my tweet, this week’s announcements are a continuation of the existing iPad story. If you loved chapter 3, then you’ll love chapter 6. If you’re looking for a more comprehensive solution from Apple, this week’s news is probably nothing to get excited about for your school district.

Apple’s next book for education needs to be about reinventing everything. Part of the Tim Cook doctrine is this:

“We believe that we need to own and control the primary technologies behind the products we make, and participate only in markets where we can make a significant contribution.”

This doctrine should apply to education as well. If Apple believes they can make a significant contribution to schools, then they should go all in to change everything about school technology. They should buy major a textbook publisher and change the purchasing model for books when you deploy iPads. They should buy (or buy back) a student information system platform and integrate it with all of their new apps.

They should build a viable alternative to G-Suite that makes it easy for schools to manage communications. They should do all of this at a price where the least affluent districts can deploy it as easily as the most affluent ones. 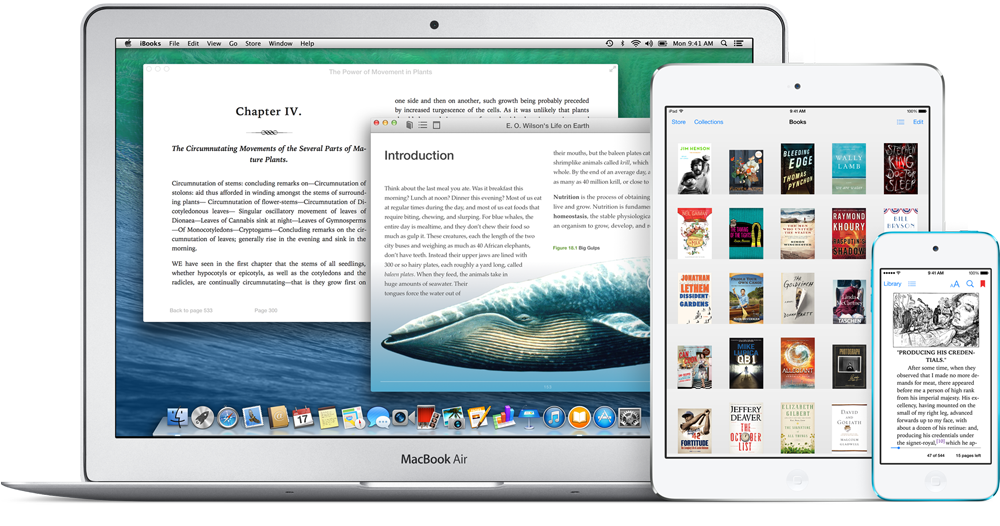 At the end of the day, students still have to pass standardized tests. They still have to meet all of their mandated requirements. I’m not sure an iPad with Apple Pencil support and some new GarageBand sound packs are really going to make that big of a difference as fun as they may be.

Thanks to Setapp for sponsoring our live coverage of Apple’s Education event this week.