API changes will break Tweetbot and Twitteriffic alerts and streaming, Twitter not yet sharing new solution ahead of June deadline [U]

After totally killing Twitter for Mac, Twitter’s next move appears to be taking some seriously useful features out of third-party Twitter clients: push notifications and streaming. Losing the ability to receive notifications and update timelines as new tweets arrive would significantly limit apps like Tweetbot and Twitterrific which serve the Mac, iPhone, and iPad.

The problem is an upcoming change to how Twitter allows third-party apps to access “streaming services” which power push notifications and updating timelines. The problem is detailed at Apps of a Feather:

After June 19th, 2018, “streaming services” at Twitter will be removed. This means two things for third-party apps:

If you use an app like Talon, Tweetbot, Tweetings, or Twitterrific, there is no way for its developer to fix these issues.

We are incredibly eager to update our apps. However, despite many requests for clarification and guidance, Twitter has not provided a way for us to recreate the lost functionality. We’ve been waiting for more than a year.

Twitter’s replacement for the existing solution, the Account Activity API, is in beta testing by Twitter, but third-party apps have not been able to work with it despite the June 19th deadline approaching.

The explainer on Apps of a Feather further details what will happen if Twitter doesn’t act before the change is implemented:

With access we might be able to implement some push notifications, but they would be limited at the standard level to 35 Twitter accounts – our products must deliver notifications to hundreds of thousands of customers. No pricing has been given for Enterprise level service with unlimited accounts – we have no idea if this will be an affordable option for us and our users.

Automatic refresh of your timeline just won’t work: there is no web server on your mobile device or desktop computer that Twitter can contact with updates. Since updating your timeline with other methods is rate-limited by Twitter, you will see delays in real-time updates during sporting events and breaking news.

For now developers must resort to creating workarounds that try to address the upcoming changes, but Twitter is not detailing how its Enterprise Account Activity API will work or how much it will cost developers.

It’s a massive change to how third-party Twitter clients will need to operate without proper communication from Twitter just two months before it is implemented. 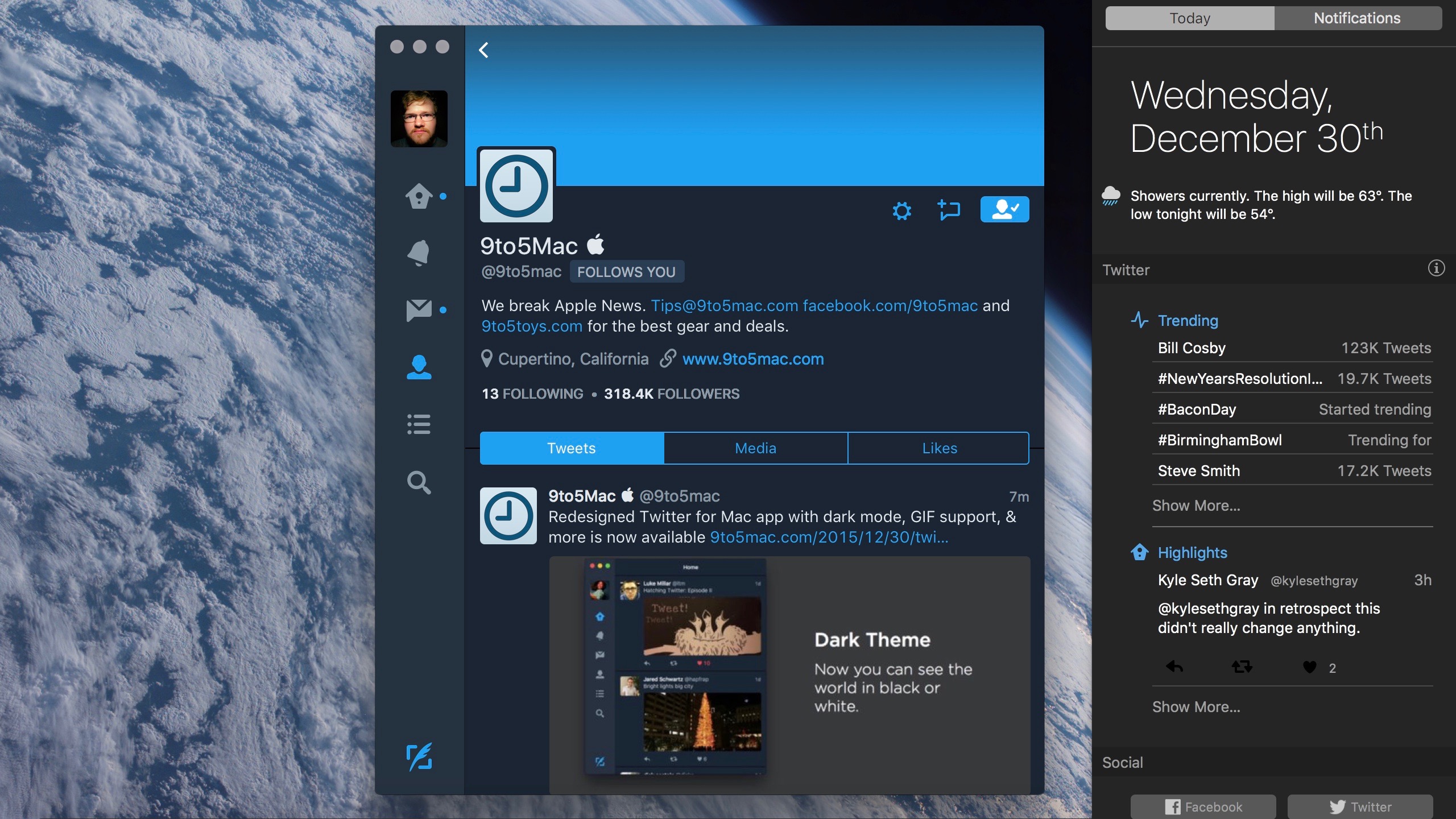 If third-party apps like Tweetbot and Twitterrific lose the ability to offer push notifications and streaming timelines in June, there won’t be clear replacements for native apps with similar features — especially from Twitter.

Twitter for iOS offers push notifications for mentions and new tweets, but there is no streaming feature to update your timeline without manually refreshing. Streaming is essential for following news and using the service passively.

Twitter did offer the ability to stream your timeline in realtime through its Mac app, but Twitter for Mac totally stopped working a few weeks ago. Twitter offers TweetDeck for Mac which supports streaming through a non-native web view, but the app notoriously suffers stability issues that have not been addressed in months.

As for what users can do about the upcoming changes, Apps of a Feather offers this:

As third-party developers, our hands are tied. However, you can help by letting Twitter know how you feel:

Many folks don’t realize that their favorite Twitter app is about to break, so awareness is the first step. Together, we may be able to get Twitter to constructively address this state of affairs before the June deadline.

Hopefully the bump from today’s coverage pressures Twitter to stop sabotaging third-party apps and communicate with developers about how to move forward — even if subscriptions are required in the future to sustain apps like Tweetbot and Twitterrific.

Without a proper Twitter for Mac client, indie apps like Tweetbot and Twitterrific with support for timeline streaming is essential for my workflow and TweetDeck simply isn’t a reliable alternative.

Last year we announced our plan to retire Site Streams & User Streams, and replace them with the Account Activity API (currently in beta). We are delaying the scheduled June 19th deprecation date.

As always, we’re committed to providing ample time to migrate. We will provide at least 90 days notice of deprecation date from when the Account Activity API becomes generally available to all developers. More specifics on timing to come.

Developers currently using Site Streams and User Streams can review how to migrate to the Account Activity API with our migration guide. https://t.co/Q5uDmysM0y

As a reminder, developers who want beta access to the Account Activity API can still apply. https://t.co/um2NQDJXUe