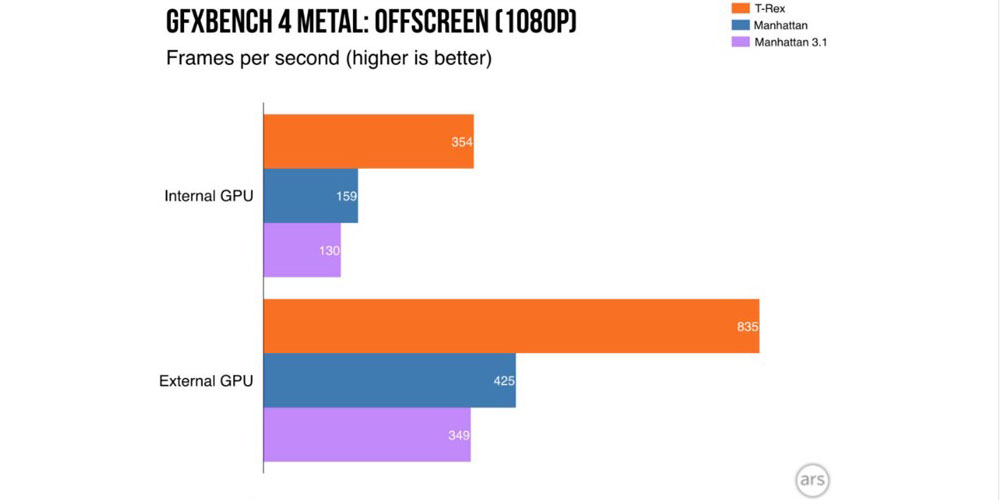 We noted in our latest Back to the Mac feature the mixed state of play when it comes to the official external GPU (eGPU) support added in macOS 10.13.4.

But new benchmark tests show that, while there are still plenty of issues to be resolved, the gains available from a high-end eGPU are substantial …

ArsTechnica benchtested the AMD Radeon RX 580 against the top-end 2016 MacBook Pro’s own Radeon Pro 460 – though it should be noted that the 2017 model offers the Radeon Pro 560. The enclosure used was the Sonnet eGFX Breakaway Box 350W.

The site found that some metal apps ran more than twice as fast.

We found that the external RX 580 usually provided a significant performance advantage over the internal Radeon Pro 460. The RX 580 is a markedly faster GPU, so that might not seem like a surprise, but we were pleased to find that running the GPU over Thunderbolt 3 didn’t stop us from seeing satisfactory gains.

Metal performance was sometimes more than twice as fast on the RX 580 compared to the Pro 460. OpenGL saw performance boosts ranging from around 20 percent up to about 75 percent, depending on the application. For users interested in demanding applications like 3D modeling software and triple-A games in macOS, this is great news.

Ars did, though, note that performance varied significantly by app, often without any obvious reason.

While the gains were impressive in most supported applications, some applications (like Civilization VI) simply didn’t show the kinds of gains you’d expect given the hardware gap between the RX 580 and the Pro 460. We don’t believe this was because of limitations with Thunderbolt or anything else hardware-related, though.

Hitman, an app the site typically includes in its benchmarks, didn’t run at all.

Unfortunately, this is not the only time we encountered crashes while trying different applications with the eGPU. You never quite know what you’re going to get when you launch a demanding application. Usually, you’ll get strong performance improvements. Sometimes it’ll work, but you won’t see big gains. And other times, you’ll experience crashes and other problems.

One surprising fact is that Final Cut Pro X didn’t use the external GPU.

We intended to run comparative benchmarks with Final Cut Pro, but found that it still relies on the internal GPUs to perform demanding tasks. For example, we created a five-minute, 4K video with several effects applied and exported it to an H.264 video file. The GPU in the external enclosure wasn’t touched when performing this task.

Senior reviews editor Samuel Axon echoed our own Jeff Benjamin’s view that eGPU support is still in its infancy.

eGPUs might be publicly supported now, but they’re still not ready for primetime. The experience is too unstable, support isn’t robust enough, there are too many caveats and limitations, and Boot Camp support will be necessary for eGPUs to be attractive to many consumers.

If you’re a fan of eGPUs, have you taken the plunge already, or are you waiting for now? Let us know your thoughts in the comments.