It’s always fun seeing Apple break down its adoption numbers for devices running the latest version of iOS. Today, the company did just that and it looks like 76% of users are now running iOS 11. Meanwhile 19% of users are still running iOS 10, and a smaller 5% of users are running some version prior to that.

It’s worth noting that these numbers are based on devices that connect to the App Store. So, if you have an old iPod Touch that’s never connected to Wi-Fi and launched the App Store, this does not count you.

The number may also be inflated due to devices that come with iOS 11 pre-installed, such as the iPhone 8, 8 Plus, and iPhone X. The last official update from Apple put iOS 11 adoption at 65% back in January. 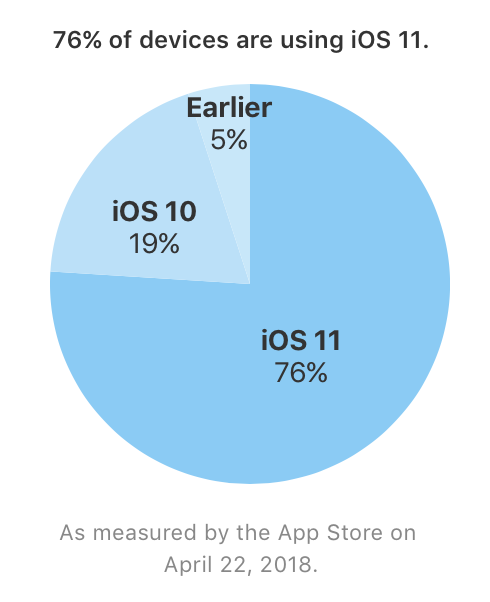 In similar news, Conviva (via TechCrunch), a video AI platform is now reporting that major streaming platforms are seeing a 114 precent YoY increase in streaming hours in Q1 of 2018. This equates to roughly 5 billion hours of video watching. While these numbers are worldwide, North America saw the biggest growth, with a 174 percent increase quarter-over-quarter.

Apple TV over the last year saw a huge 709 percent increase in viewing hours. That equates to roughly 256 million hours of watch time on tvOS. Regardless, Apple TV is still trailing far behind other streaming boxes such as Roku.