The Apple Watch app market as it stands is similar to the early days of iPhone, where everything is done with major limits and there’s no real way to take full advantage of the Apple Watch hardware.

However, Nano for Reddit aims to resolve this issue. Nano is an Apple Watch app that aims to bring the full Reddit experience to the Watch, with no compromises. The app allows you to not only browse your Reddit homepage, but also view images and respond to comments and messages via scribble or voice. While you can’t open web links on the Apple Watch (and that goes for all watchOS apps), images, videos, and long form texts from blogs or news sites will load just fine. 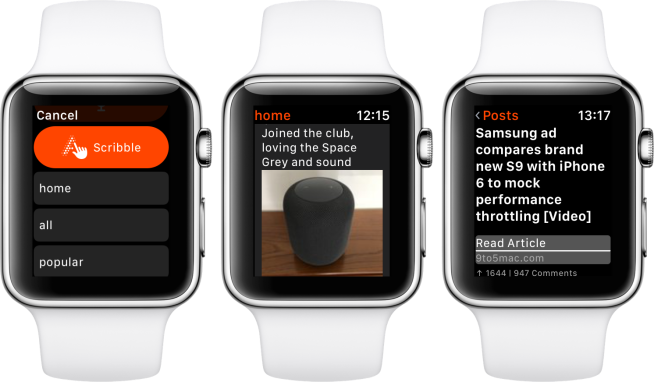 The best part? It’s native to the Apple Watch Series 3 so it runs over LTE without a hitch, and it will run independently of the iPhone (after initial setup). It has all the basic Reddit functions such as up/down voting, changing subreddits, or searching for a specific subreddit.

The app is available as a free download, with an optional in-app purchase to allow you to view more than 5 subscriptions, access favorites, multireddits, and support for Apple’s Handoff between the app and your Reddit client of choice on your iPhone. The in-app purchase is based on a tip system that ranges anywhere between $2 and $4 and will unlock all future pro features as well.

However, we are giving away several pro subscriptions to our readers. These codes can be found in the comments of this post.

Nano for Reddit truly brings the Reddit experience to the Apple Watch, no compromises. It’s a classic example of function over form. While not the most prettiest UI ever, the UX is the top priority and it doesn’t disappoint whatsoever. Heavy Reddit users who own an Apple Watch, especially a Series 3, will truly appreciate the utility of the app. Luckily, you have some control over the appearance of the app, bu it’s fairly limited.

The app uses Force Touch as a way to get around some limitations. Force Touching anywhere in the app brings up the option to change the subreddit, sorting options, access your inbox, or access the app’s settings. 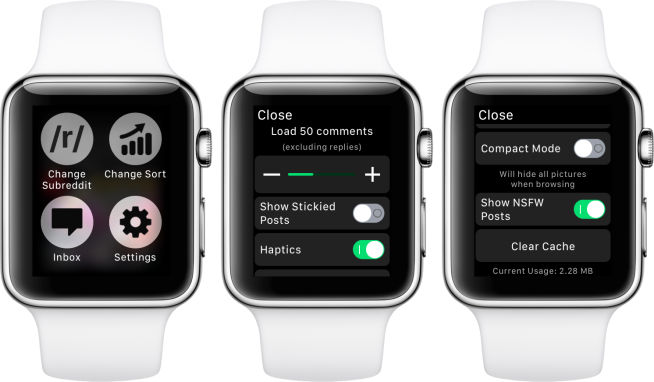 In the settings, you can change how many comments load per post, show stickied posts, enable haptics, or enable a compact mode if you’ve got a limited data plan. You also have options for showing NSFW posts (disabled by default) and an option to clear cache.

The iPhone app is pretty bland. It’s one of those set it and forget it moments. Fire it up once you download it, log in, and buy the pro version is essentially all the iPhone counterpart is good for. If you’re looking for a Reddit client for an iPhone, look elsewhere.

For some bizarre reason, major social networks such as Facebook, Twitter, or Instagram refuse to release and update their Watch counterparts, which is unfortunate. Carrying an Apple Watch without an iPhone is a truly freeing experience and being able to check into your digital life in bursts is better than sitting on your phone for long periods of time.

Hopefully, Nano sets a standard for other developers, and encourages developers to continue supporting and updating their Watch applications. Furthermore, ideally watchOS 5 will give developers more options and the ability to do much more such as build a dedicated podcast application, allow the use of the Digital Crown to change the volume in third-party applications, or create something nobody has ever seen before.