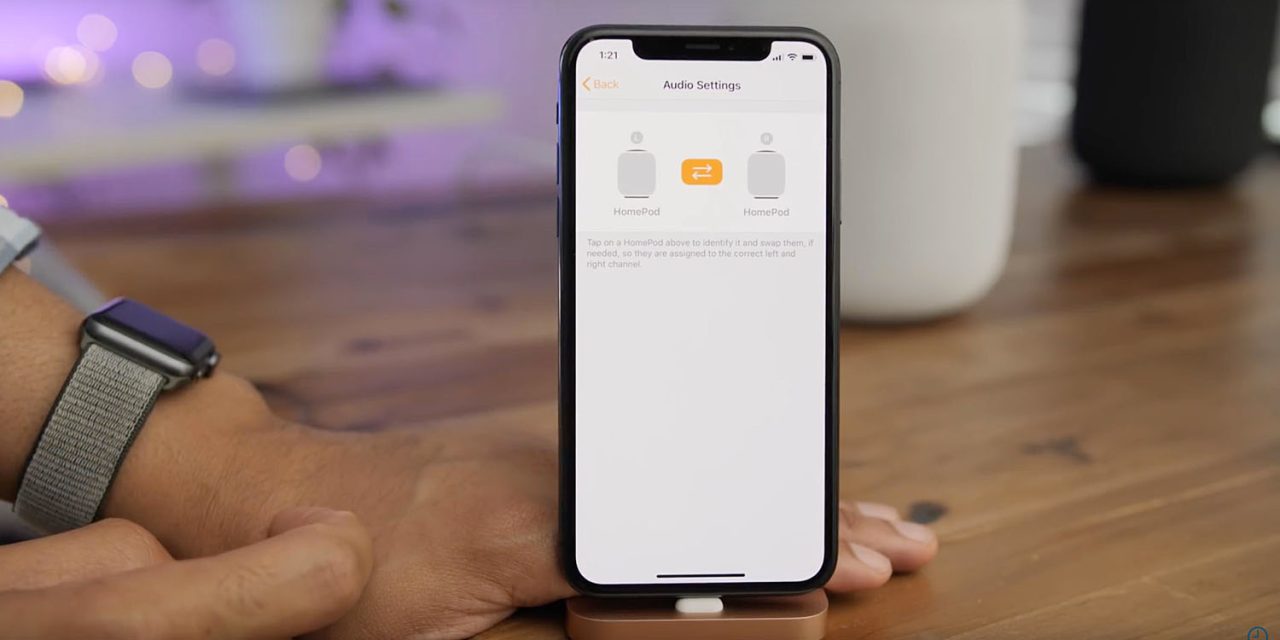 In my HomePod Diary piece yesterday, I included what was almost a throwaway comment:

One oddity is that you have to assign the left and right channels manually. Given that most people will, I imagine, orientate the speakers so that the volume controls are the right way up, I would have thought a pair of HomePods ought to be able to figure out the channels for themselves. Play a sound through one speaker and then use the directional mics on the other one to figure out whether the sound is coming from the left or right.

It’s a minor quibble, given that it takes seconds to assign them manually, but it slightly offended my sense of technological efficiency that they required me to do it.

Some supported the idea, and agreed with me that it should work for a typical setup.

Others argued that it wouldn’t in some scenarios, either describing their own particular room layout or a hypothetical one they could imagine some might have.

Yet others didn’t seem to follow my reasoning, so I thought I’d write a short piece outlining how I would see it working.

First of all, I am making an assumption: that most people are going to orientate the speakers so that the volume controls on the top panel are positioned normally. That is, volume down on the left, volume up on the right. This also has the cable emerging from the rear of the speaker, which is how I’d expect most people to arrange them.

If you prefer your cable off to the side, or want a vertical volume arrangement, than yep, the idea falls over there.

Those of you who observed that it wouldn’t be possible in all room configurations are absolutely correct. I can think of a couple of room layouts where HomePod would have no way of telling which was left and which was right, as it would depend where you were sitting.

Where it wouldn’t work

In both examples, HomePod would have no way of knowing whether your sofa was positioned in the primary or secondary positions shown, and therefore no way to assign left or right channels.

Where it would work

However, my guess is that most rooms are configured more like this:

HomePod can already tell how close it is to a wall, as its beamforming technology uses this information as part of its automatic set up process. Here’s how Apple describes the process:

Place HomePod anywhere in the room. It automatically analyzes the acoustics, adjusts the sound based on the speaker’s location, and separates the music into direct and ambient sound. Direct sound is beamed to the middle of the room, while ambient sound is diffused into left and right channels and bounced off the wall. So your music sounds amazing, wherever you are in the room.

And here’s the illustration it uses, clearly showing that HomePod is able to detect the wall:

How it would work

So, here’s how I see it working in this room layout:

To confirm, speaker 1 – which believes it is the left speaker – plays a sound. If speaker 2 hears speaker 1 from the left, then HomePod’s guess is correct and speaker 2 configures itself as the right channel.

If it gets contradictory results, or detects some room configuration where it’s impossible to tell where the listeners are, then it reverts to manual configuration (which is actually a guess with a 50/50 chance of being right).

The beauty of this is it would be completely transparent to the user. What happens right now, is HomePod already guesses and asks you to correct it if it’s wrong. Which will be half the time. With my suggestion, nothing changes for the user – except it would usually be right.

Does any of this matter?

Well, ok, not much. It’s such a simple process to tap the button to correct the guess that it isn’t exactly a big deal whether HomePod was right or wrong.

But Apple has often said that design – and user interface design in particular – is in the detail. Having a high chance that HomePod configures itself correctly is, I suggest, better than a 50/50 chance. It’s one of those small details which I think helps add up to a great user experience.