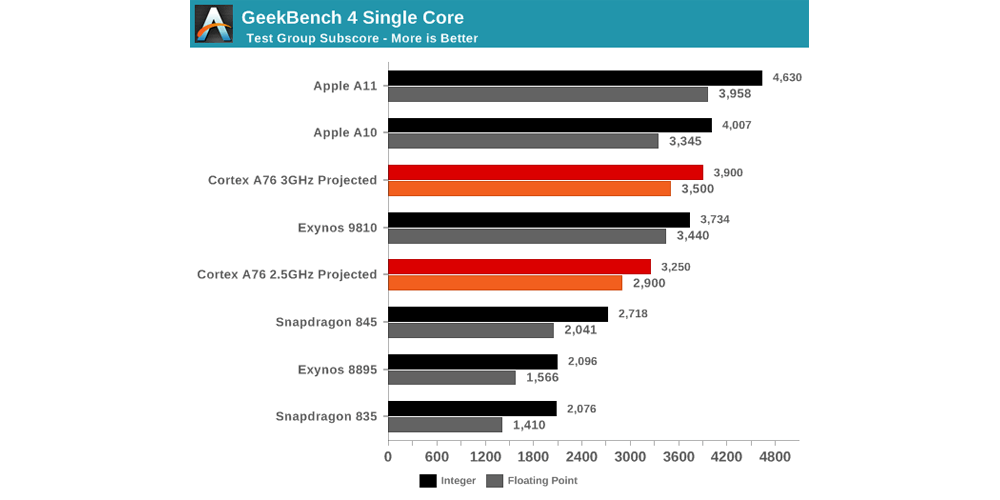 ARM has unveiled its latest high-end mobile CPU, the Cortex-A76 – and benchmark comparisons with existing Android chips and Apple’s A-series ones suggests that the iPhone maker is a solid two years ahead of the competition …

The Cortex-76 Geekbench scores cited by AnandTech are projected rather than definitive, and the good news for ARM is that it appears to just beat Samsung’s top-end Exynos 9810 CPU, and is well ahead of the Snapdragon 845 used in many of today’s flagship Android devices.

However, Apple’s A11 chip remains comfortably ahead – and as Reddit user WinterCharm notes, the scores are pretty much on a par with the A10 processor. Apple will be on to the A12 by the time Cortex-76 devices hit the market, putting the Cupertino company a solid two years ahead.

Apple’s advantage comes from a more desktop-like design than Arm would dare to do. Apple has that luxury because they are “selling” the chips to themselves without any markup. This allows them to spend every dollar on raw materials and build larger chips.

Apples A11 Mistral (high efficiency) cores are bigger than these Cortex high performanced cores. [These] are much more similar in architecture to the Core i7 CPU’s from intel – from the reorder buffer to a much wider input. They look like desktop cores, and were always designed with desktop-like performance in mind. This has been the case since the A7 went 64 bit (and not because it’s 64 bit)

Another Reddit user does, however, take issue with the comparison, noting that the A10 is a System On a Chip (SOC), which includes a GPU and more.

Either way, it’s clear that Apple designing its own chipset, and achieving tight integration between hardware and software, is a substantial benefit when it comes to maximizing the performance of a mobile device.