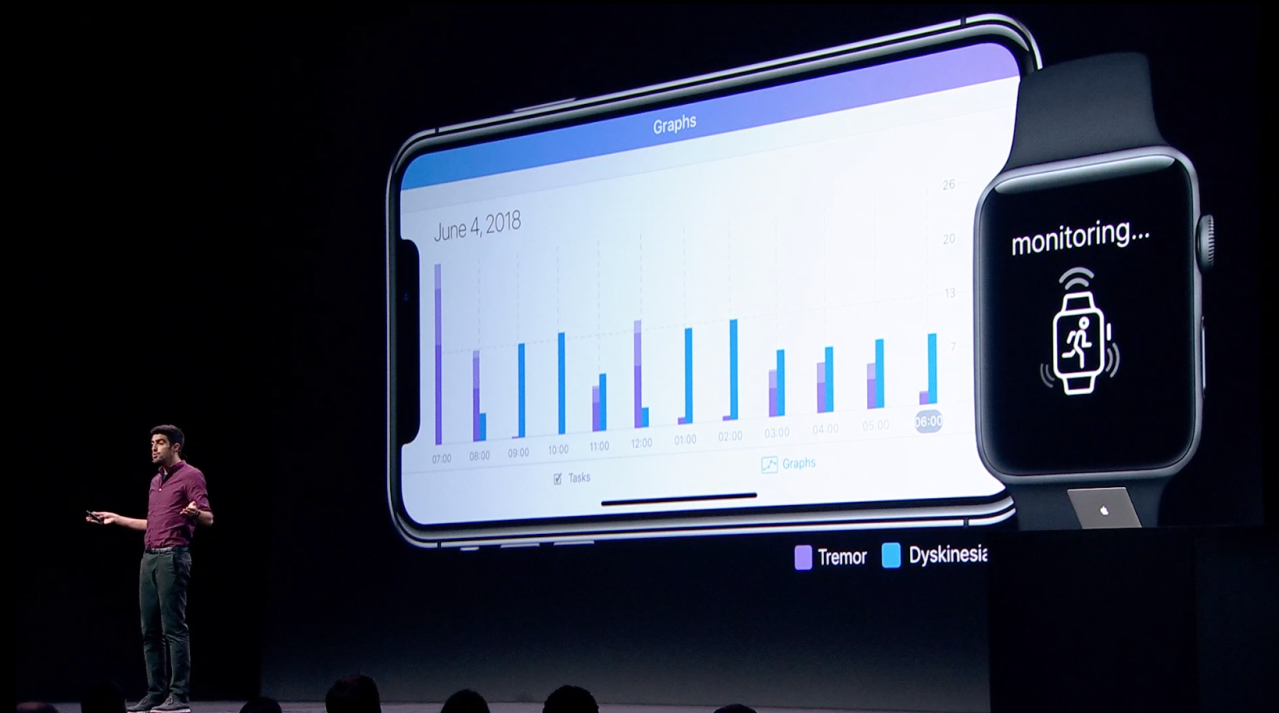 The new API will provide app developers using ResearchKit the ability to offer passive, all-day monitoring via an Apple Watch running watchOS 5. To achieve this the API will monitor two very common symptoms of Parkinson’s including Tremors, indicated by shaking and quivering detected by the Apple Watch, and Dyskinesia, a side-effect of treatments for Parkinson’s that causes fidgeting and swaying motions in patients.

Currently a physician would ask a patient while at a clinic to perform physical diagnostics tests to rate the severity of these symptoms. Patients are also encouraged to manually keep diaries when not at the clinic in order to give their physician a broader look at symptoms over time. The goal is to make that process automatic and continuous with the Movement Disorder API for Apple Watch users.

Apps would then be able to present the data for patients and physicians in a graph to see not only daily breakdowns but also hourly and by the minute fluctuations of symptoms (as shown in the demo app pictured at top).

Apple noted that it designed and piloted the new API using data collected from Parkinson’s patients in internal clinical studies.

Apple first announced ResearchKit back in March of 2015 and since has detailed how researchers have been using it effectively for studies on sleep health, concussions, autism, epilepsy melanoma, Parkinson’s disease, and much more. Notably for Parkinson’s disease in relation to the introduction of the new Movement Disorder API, iPhone app mPower boasts over 10,000 participants which Apple notes makes it “the largest Parkinson’s study in history.” Apps like mPower already use ResearchKit to tap into the iPhone’s gyroscope and other sensors as well as Apple Watch for tracking things like dexterity, balance, gait, and memory. The new Movement Disorder API, however, will give researchers a new way and more compressive data for tracking these symptoms passively with an Apple Watch.

Devs have to apply for code signing entitlement in order to get access to the Movement Disorder API, and Apple will make it available starting with the second developer release of watchOS5. In the meantime, it will have demo code and a sample study app available on the ResearchKit GitHub page.