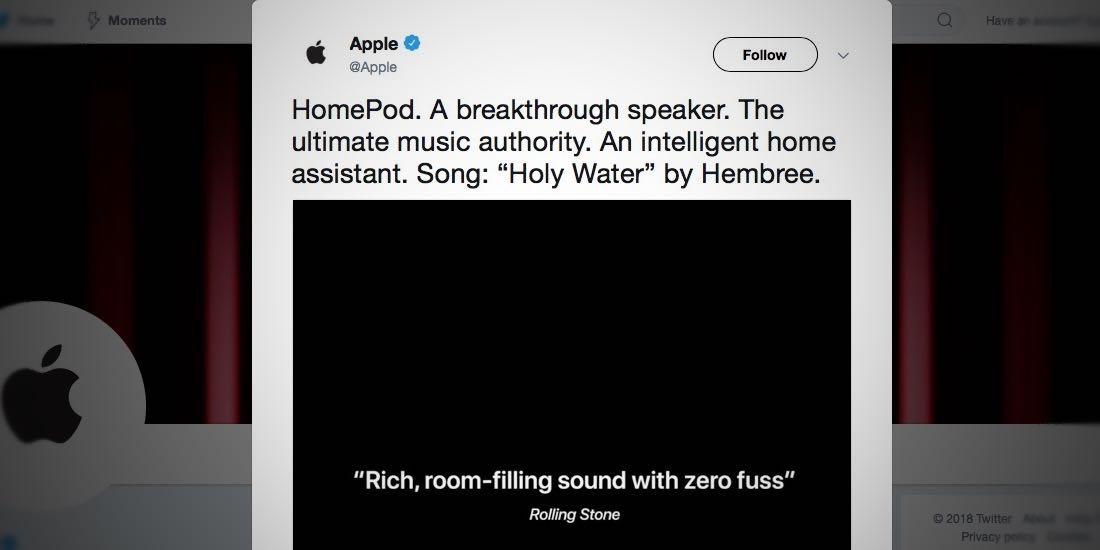 The @Apple Twitter account is nearing 2 million followers, but it has zero actual tweets on its page. However, Apple regularly posts Promoted Tweets to target advertising to certain demographics. It opts to hide these tweets from the public timeline, but there’s actually a way to see them all now, thanks to Twitter’s newly launched Ads Transparency Center …

This page for the Apple account lets anyone see promoted tweets from the company posted in the last week. You can simply scroll the Ads Transparency feed and see everything Apple is currently promoting, irrespective of any demographic targeting like language or geography.

There’s nothing revealing or particularly devious about any of Apple’s ‘private tweets’, but it’s interesting that there is now a way to see everything that Apple is currently promoting.

For example, I found this HomePod ad which I would have never have come across before. It’s a variant of the HomePod teaser ads Apple ran ahead of the HomePod’s launch in February, but with a small tweak that Apple is now including quotes from the Rolling Stone at the end that praise the product’s sound quality and ease of use.

The short summary is that Apple runs a lot of ads, although most of the promoted tweets in the rotation are duplicates of the same handful of campaigns with different localizations and languages to target customers in different countries. The majority of Apple’s ads on Twitter rely on a quick message and a short embedded video. Some includes links to Apple’s site to find out more, and some fraction also use hashtags like #BehindTheMac. As ever, social media marketing is a science of continued experimentation.

The company is currently focusing on ads relating to Apple Watch Series 3, its long-running Shot on iPhone campaign, the Switch to iPhone series and its new ‘Behind the Mac’ vignettes.