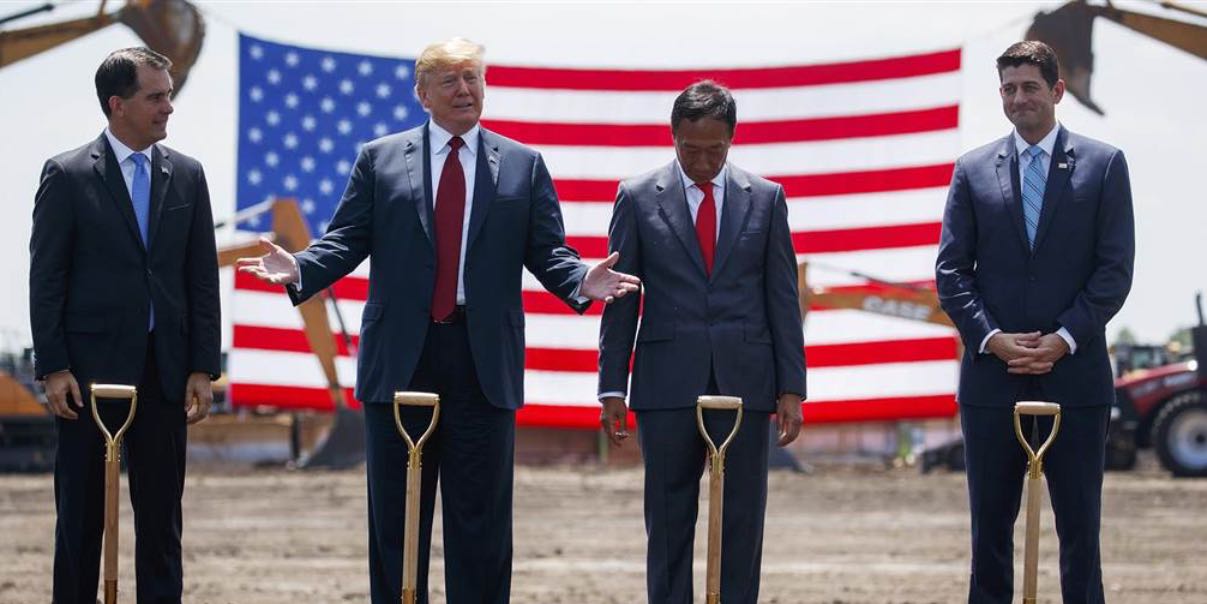 Key Apple supply chain partner Foxconn has now broken ground on its first plant in the United States. The Wisconsin factory project is estimated to cost $10 billion and create thousands of jobs. President Donald Trump attended the construction launch, who has said he hopes this project will help kickstart a wave of US manufacturing, with less reliance on Asia.

When completed, the factory will manufacture LCD screen panels. Foxconn is hoping to use the plant to make ultra-high-definition televisions to sell directly into the US market. The iPhone assembler acquired Sharp back in 2016, and has significant investments in Vizio — another major US brand.

At this stage, it’s not clear if Apple will seek to include the US display plant in its supply chain. Whilst Foxconn assembles the majority of iPhones in its China facilities, Apple currently sources screen panels from Samsung, LG and Japan Display.

It’s latest high-end flagship, iPhone X, relies on OLED panels as will two of its upcoming 2018 iPhones. The Wisconsin plant is currently being focused on LCD production but likely could adapt to OLED or other technologies if funnelled by market demands. Similarly, whilst initial plans indicate the Wisconsin plant is being setup for large-screen LCD panels suitable for home television sets, it is possible that it expands into small-screen displays for phones and tablets in the future.

Apple has certainly shown interest in making more of its product domestically. It is possible that more and more iPhone components are produced outside of the US, although it is unlikely that final assembly will leave China anytime soon. Apple has committed to financially investing in US manufacturing businesses with the Advanced Manufacturing Fund, upping its investment commitments to $5 billion in January.

Current investments include Corning, which manufacture hardened-glass covers for Apple device displays, and Finisar, which develops VCSEL lasers used in the TrueDepth camera system for Face ID in the iPhone X.

Today, we broke ground on a plant that will provide jobs for up to 15,000 Wisconsin Workers! As Foxconn has discovered, there is no better place to build, hire and grow than right here in the United States! pic.twitter.com/tOFFodZYvK