How iOS 11.4.1 limits USB accessories to make your iPhone and iPad more secure The iOS 11.4.1 update includes a new security feature that restricts the way USB accessories can interact with iPhone and iPad devices. If the phone has not been unlocked within the last hour, iOS will disable the Lightning port so USB accessories cannot communicate with the device. After unlocking, any accessories will stay connected.

USB power chargers are not affected, but some USB accessories that provide power may not charge the device until the device has been unlocked. Apple has detailed in a new support article exactly what this means for users ….

Why is Apple putting restrictions on the Lightning port? The support article pointedly does not elaborate on Apple’s motivation for implementing this, but the company did talk to the press a few weeks ago ahead of the update coming out.

Graymarket security companies have created tools that can bypass parts of the iPhone security system, such as removing the time delays between passcode entries, by sending messages over the Lightning port. Grayshift is the most notable manufacturer of these boxes, which it has been selling to law enforcement for a few months. The box enables the user to brute-force access to the locked device by attempting every possible four or digit PIN code in a matter of minutes, as the usual hour-long delays between successive tries have been lifted.

Any technique that law enforcement finds can also be used by criminals. As such, Apple has responded by strengthening device security and adding new limits on how the Lightning port works. Theoretically, iOS 11.4.1 should prevent these Grayshift boxes from functioning as the iOS device will simply refuse to communicate with the unit — if it hasn’t been unlocked in the last hour. Some reports indicate that the devices are still susceptible even post iOS 11.4.1, but this is yet to be proven.

So with iOS 11.4.1 installed on your iPhone, if your device is lost for more than an hour and then comes into the wrong hands, it should not be possible for the unscrupulous party to use one of these boxes to unlock the phone.

Apple explains in the support article that if you connect an accessory with an authenticated iOS device, the iPhone or iPad will not disconnect the accessory for as long as it remains plugged in, even if the iOS device is locked. It also does not affect chargers like wall adapters you plug into at night; the restricted mode allows the battery to receive power. Some accessories that charge and perform other smarter things may not charge as a result of iOS 11.4.1, however.

In general, most normal customers will not be inconvenienced by the tighter security measures and many won’t notice it all.

You will know when the iOS device is not communicating with accessories if the following message is visible on the lock screen: ‘Unlock iPhone to use accessories’.

However, some portion of the user base may find themselves hitting the lockout often. For example, disabled or visually-impaired iOS users may rely on a Lightning accessory to operate their devices. To appease these customers, Apple is offering a way to disable this security feature and prevent the ‘Unlock iPhone to use accessories’ alert from ever appearing.

The wording is slightly confusing here, but the toggle that controls the setting can be found in the Passcode pane of Settings. From the main Settings page, select Face ID & Passcode (or Touch ID & Passcode if not using an iPhone X). Then, scroll down to the Allow Access When Locked section. The toggle next to USB Accessories is off by default. 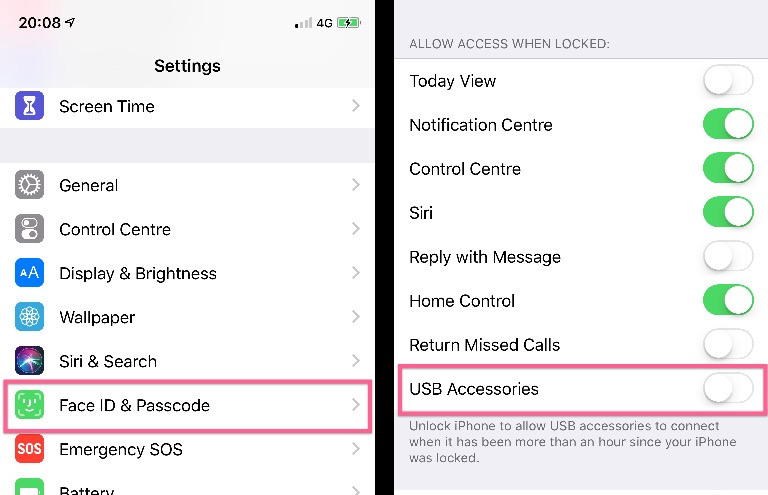 If the switch is off, then it means the 1-hour lockout on USB accessories is active. To disable the feature, you need to switch the toggle to on. USB Restricted Mode is disabled if the toggle is enabled.

‘USB Accessories’ access when locked enabled mirrors the behaviour before iOS 11.4.1, although naturally it is a tradeoff as it exposes that device to the same kind of security flaws described above.

Apple says that some assistive devices will automatically enable the USB Accessories toggle, but it will be off by default for the vast majority of users.

In general, users will not need to worry about this setting. The default behaviour maximises the security of the device and shouldn’t cause too much of an inconvenience. It is a rare occurrence that you haven’t unlocked and used your iPhone at least once in the last hour.

Apple wages a constant battle with hackers to keep its iOS devices secure. The restrictions on the Lightning port in iOS 11.4.1 is one of the few times that Apple’s security features have a visible impact on how the device operates, but in every new release of iOS, Apple includes a bevy of fixes that address security flaws as they are discovered. It’s always important to keep your iOS device up-to-date to defend against all of the latest compromises. We’ll wait and see whether USB Restricted Mode is effective, and how long it takes for someone nefarious to circumvent Apple’s latest changes.