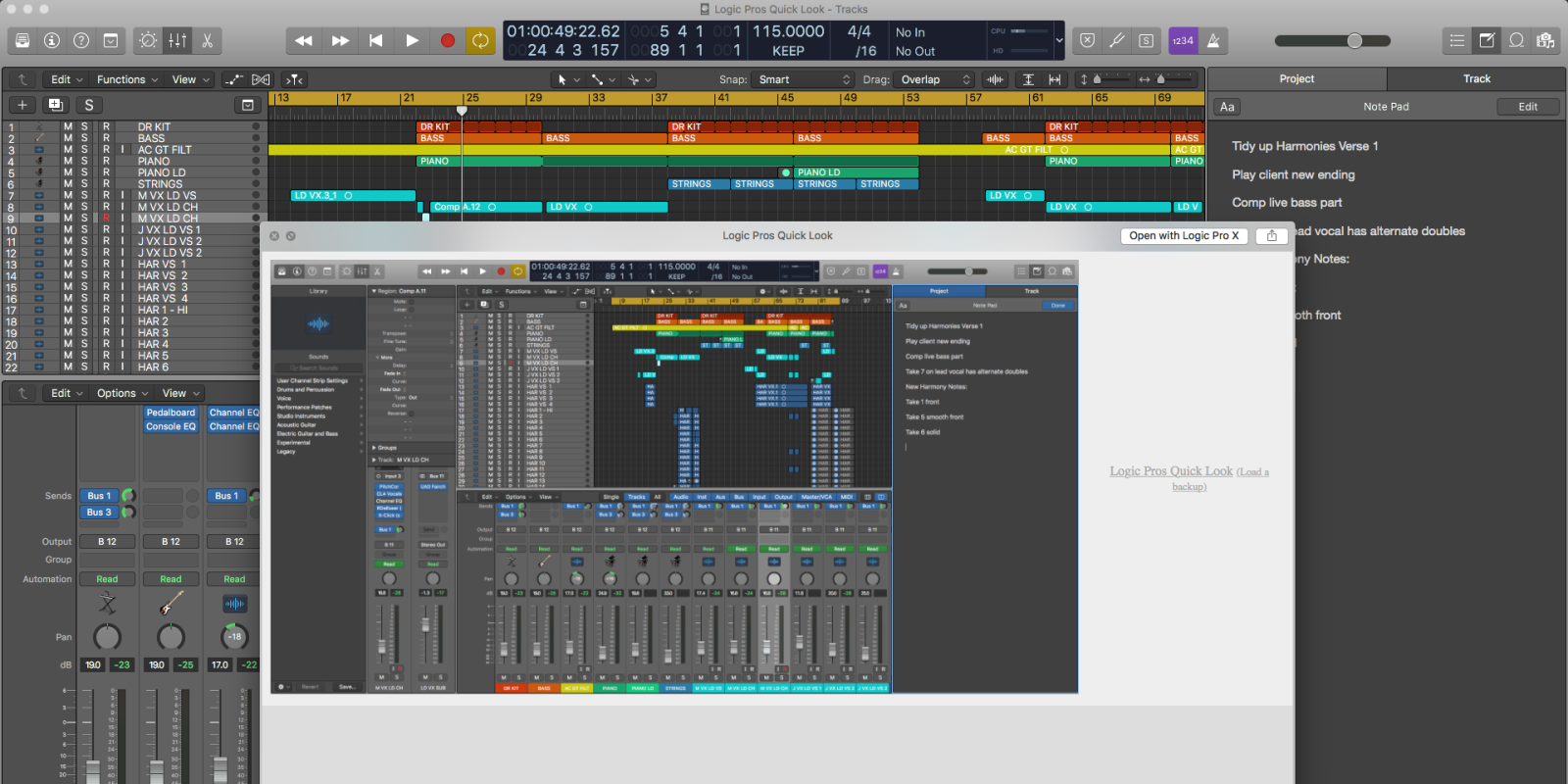 The Quick Look feature in macOS has always been a particularly useful, albeit somewhat unremarkable feature in Apple’s desktop environment. Select any file in the Finder, hit the Space bar and boom, you get a quick look at the contents of the file without having to open it in a compatible app. I use it relentlessly. If you’re anything like me, this is incredibly convenient for previewing images, listening to audio files and getting a quick peak at documents/PDFs. However, it all depends on the type of file you’re taking a Quick Look at. A Logic Pro X session file offers up an image of the main tracks area in that particular session just the way it was when you last saved the project along with some quick links to backups, but we think it’s time Apple takes it up a notch.

We want audio previews via Quick Look for Logic Pro X session files. This used to be the case with GarageBand project files and still is to some degree, although in a less helpful manual capacity.

The basic idea, for those unfamiliar with the legacy GarageBand feature, is when a Logic session is saved and closed, macOS would be able to bounce (or render) a simple MP3 file of the session in order to offer up an audio preview via Quick Look.

We had it on GarageBand in the past, so we know the brilliant engineers at Apple could find a way to implement this feature in to its flagship pro-level DAW platform.

I often times find myself wasting valuable time with clients, co-workers and collaborators manually bouncing various files of the many songs, cues and versions there of. Whether it be just as reference during the end of night creative team debrief or just to highlight a point you’re trying to make about a particular element of the work you’re doing, it just seems like a useful addition to the already expanding capabilities of the macOS Quick Look feature. Considering it can take a few minutes for large projects to open up in Logic, there are times when these wait times just aren’t practical.

Speaking of which, be sure to go check out 9to5Mac’s Jeff Benjamin demo all of the new Quick Look features (and basically everything else) coming in macOS Mojave. Apple is introducing audio and video editing along with enhanced Markup features.

As is the case with many creatives, music makers tend to find themselves with loads of little ideas carefully tucked away in Logic sessions on their hard drive. While in many cases, we will have bounced an MP3 of the piece in order to carry it with us or quickly listen back after the fact, but that’s not always how it goes down. If you’re anything like me, you have all kinds of session files spread across your Logic session directories sans-bounce folder because you just never got around to it for some reason. Being able to quickly return to these kinds of projects with a simple tap of the Space bar would be wonderful for artists who may have otherwise left a gem buried in a silent Logic session Quick Look preview never to be heard by the world again.

Understandably, users should be able to opt in and out of this automatic background feature at will considering some pros won’t want their horsepower-intensive scores eating up background tasks and filling up their hard drives with unwanted bounces. Ideally the feature could be disabled on a session-by-session basis, stopping certain projects from automatically rendering behind the scenes. Much like the more manual share to media browser functions found on GarageBand, ideally LPX users would be able to choose a universal audio codec/quality for these auto project bounces and even a length. In other words, users with hundreds of Logic projects might just choose to auto render the first 30 seconds or 1 minute of each session for preview purposes. 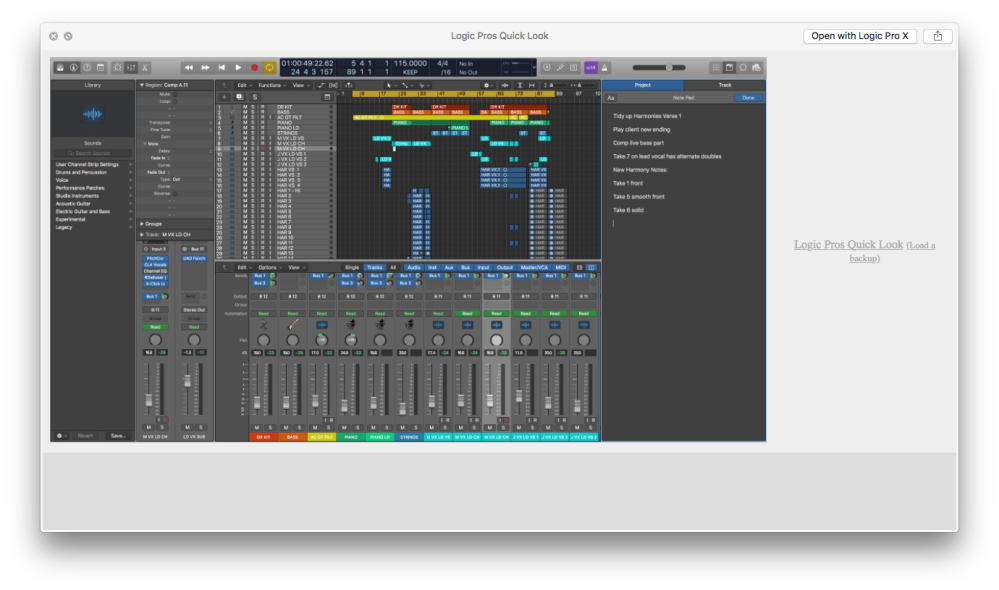 While we are on the topic, it’s probably time to update the Logic Pro X project Quick Look preview entirely. The image is great for checking the tempo or even the arrangement on a project but we should get more than just backup alternatives. Considering we are suggesting the entire Quick Look window should be an audio player at this point, you might as well over haul the dated looking text link, add a way to play audio of all of the project backups and maybe even offer up the project’s Note Pad side panel in some way.

Some of our editors have been hands on with Mojave for a while now and it does not appear to have had any effect on LPX Quick Look files.

Has anyone already found an interesting work around for this? Hit us up the comments below!