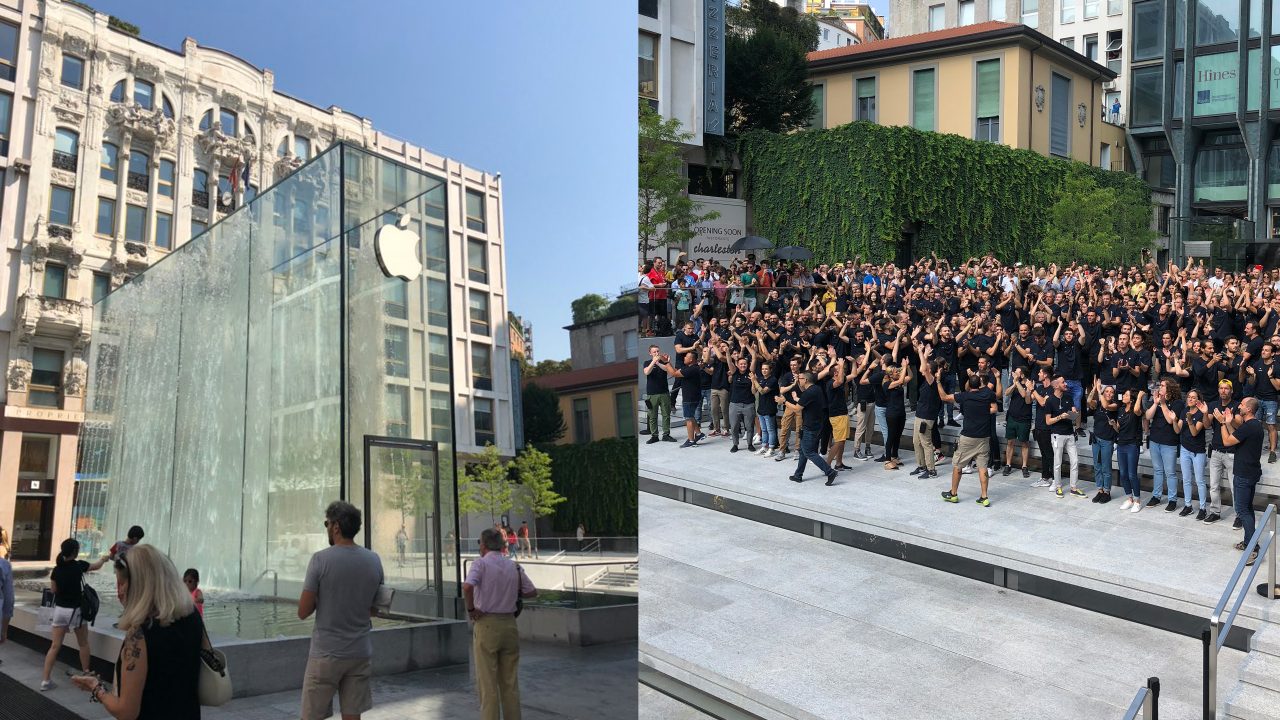 Update: Apple has shared their own photos in a Newsroom post.

Against a sparkling backdrop of soaring fountain jets, Apple today welcomed the public for the first time to its global flagship retail store and amphitheater in Milan, Italy’s Piazza Liberty. The store is Apple’s 17th in Italy, but one of the first in a series of significant next-generation retail projects around the world.

9to5Mac reader Dené Schunck attended the grand opening and provided us with photos of the store and crowd that lined up to be among some of the first to enter the store’s glass foyer. In typical new store opening tradition, dedicated fans began gathering many hours ahead of time around the store’s entrance, where Apple distributed umbrellas to protect from the sun.

The amphitheater, lined with Beola Grigia stone, steps down below the level of Piazza Liberty’s waterfall entrance to a second glass wall below, punctuated by a lighted Apple logo behind a continuously flowing shower of water. In the evening, strategically angled spotlights shine on the cantilevered treads of the staircase inside, casting cinematic shadows down the stone wall. The curtain of water diffuses the light, giving the entire amphitheater a warm glow. 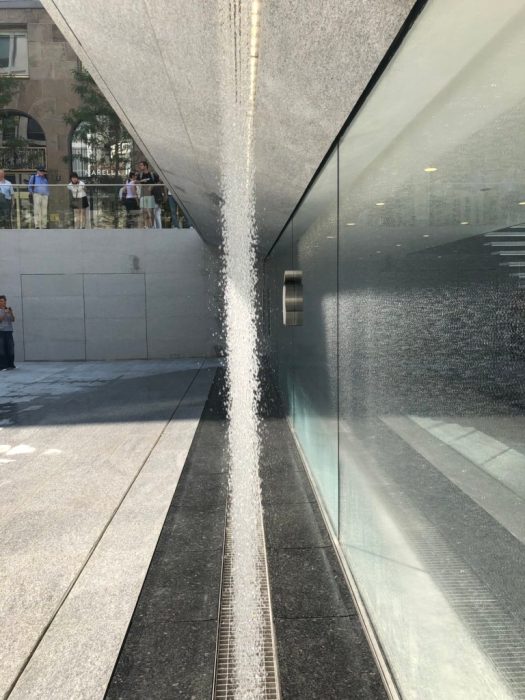 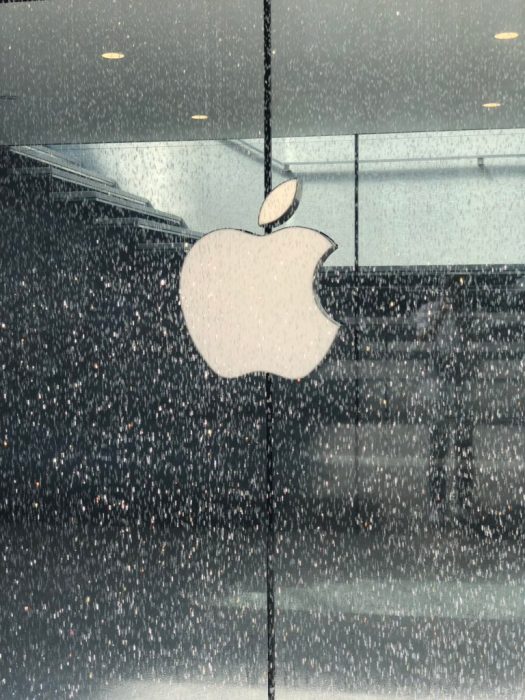 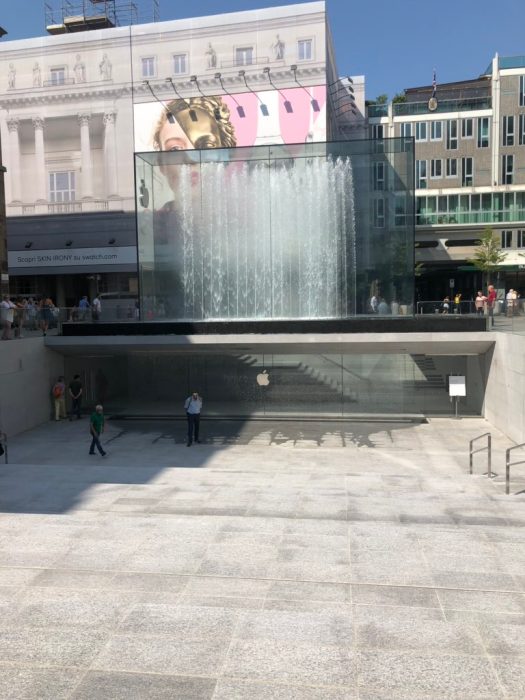 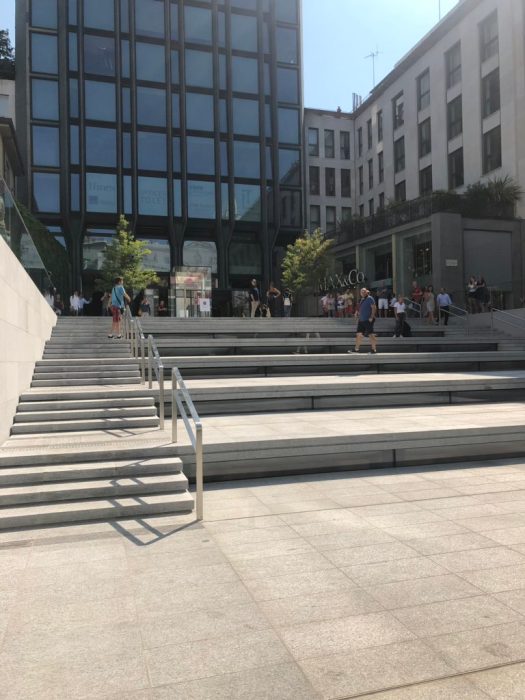 This evening, Piazza Liberty’s first live performance will be held, a concert by Sofia Gallotti (known as L I M.) Gallotti was one of 21 artists that Apple collaborated with to celebrate the opening of Piazza Liberty and inspire creativity with the question “Cosa farai domani, Milano?” or “What will you do tomorrow, Milan?”

In lieu of commemorative t-shirts, Apple has created a special edition book with the same name, featuring the creations of all 21 artists whose work also headlined the promotional banners that briefly announced the store’s grand opening. Early visitors at the store received a copy of the book and matching tote bag. 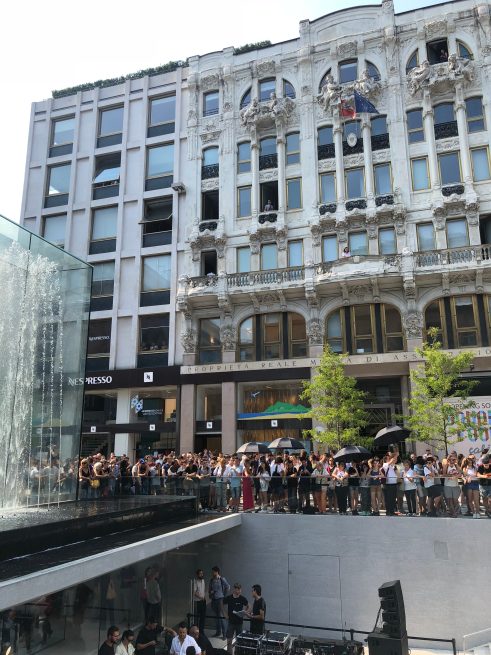 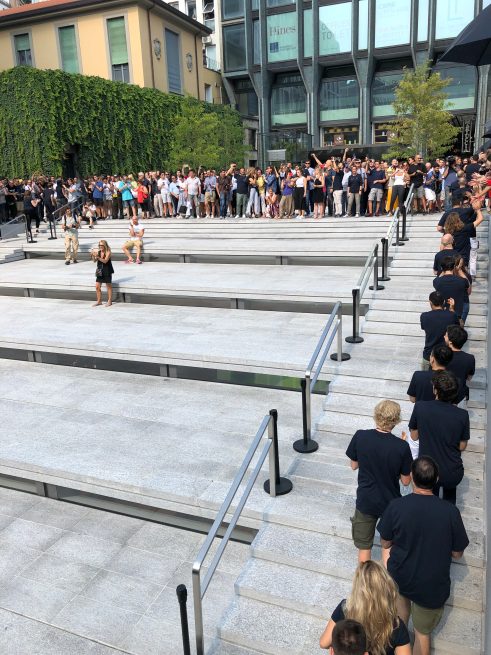 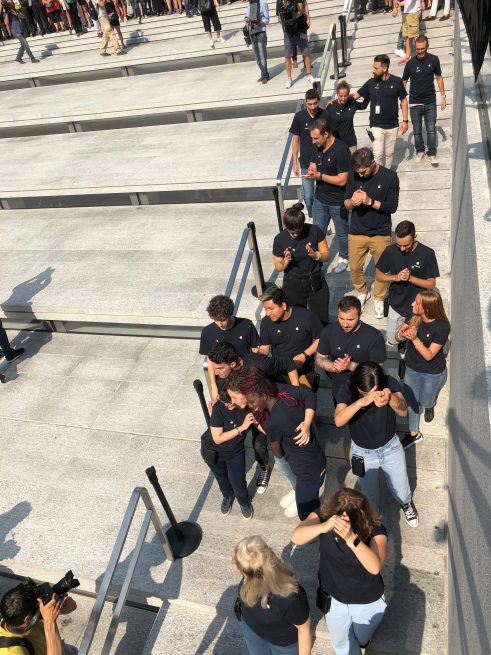 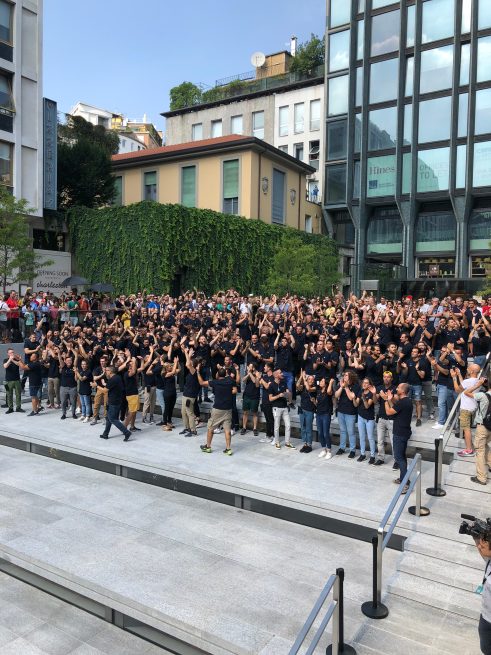 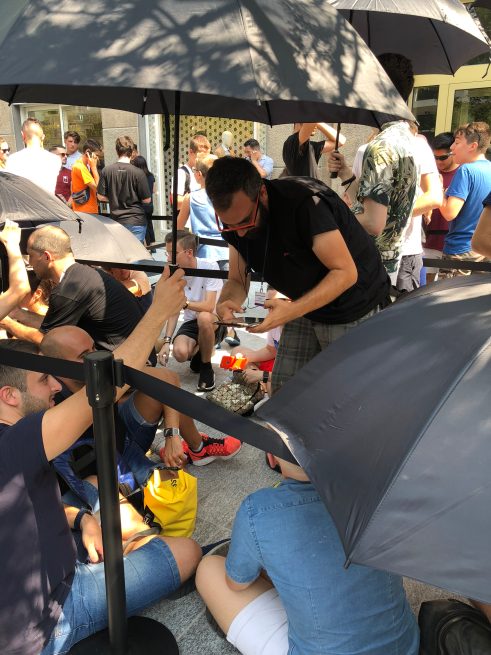 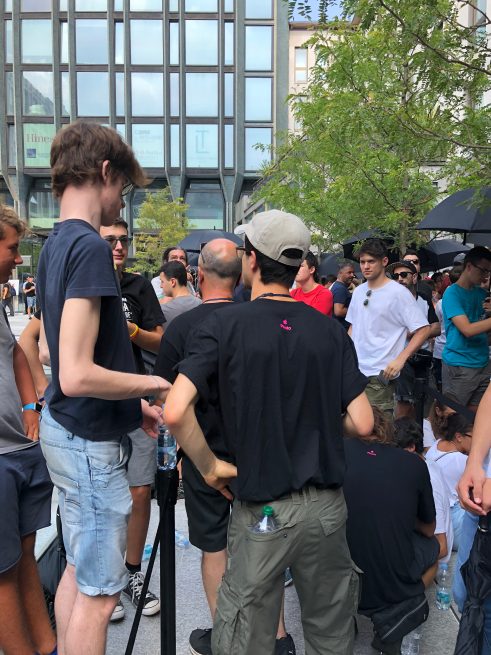 Thirty minutes before opening, Piazza Liberty’s 230 employees lined up on the stairs of the amphitheater for a celebratory photo, chanting “Mi-la-no, Mi-la-no!” to energize the crowd. After descending the staircase underground (or taking the glass elevator located at the back of the piazza), visitors were greeted by Apple’s SVP of retail, Angela Ahrendts. Ahrendts stopped by the store yesterday as well to visit with employees and greet fans ahead of the grand opening, snapping selfies and taking time to chat.

See us tomorrow @AngelaAhrendts, thanks for this amazing photo! Can‘t wait to celebrate the opening of #ApplePiazzaLiberty tomorrow. pic.twitter.com/e4VAOh8fu7

Also in attendance today and during a press preview of the store earlier in the week was architect Stefan Behling. Behling is a Senior Executive Partner at Foster + Partners, the architecture firm Apple worked with to bring life back to the piazza. Behling explained during an impromptu interview how the store’s plan was a collaboration with Apple’s Chief Design Officer Jony Ive and the entire Apple design team. He also detailed the significance of fountains in Italian squares, a feature that Piazza Liberty previously lacked.

Apple’s fountain was realized with help from Watercube, a design firm specializing in water installations that has completed many significant projects in Italy and beyond.

Inside the store, made easier to visualize by this cutaway model, two rows of Avenue display cases run the length of the sales area, framing Apple’s signature wood tables in between. Underneath some of the tables are custom fabricated sections of stone flooring that have been perforated to act as a ventilation system for the room.

The Forum seating area near the store’s video wall has been lined with Gleditsia Sunburst trees. Above, the outline of the amphitheater is made visible by ceiling panels that step upward between narrow windows allowing sunlight into the underground space, and the opportunity for passersby to catch a glimpse of the video wall from outside. At the rear of the space lies a door leading to the Boardroom, a luxuriously furnished private area for meetings and entrepreneurs. 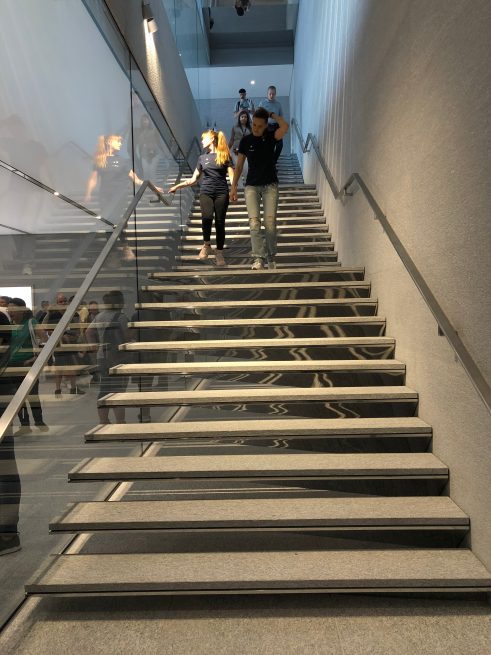 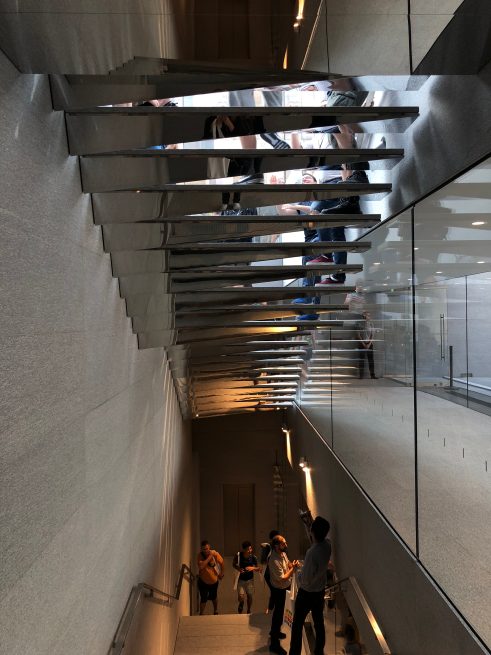 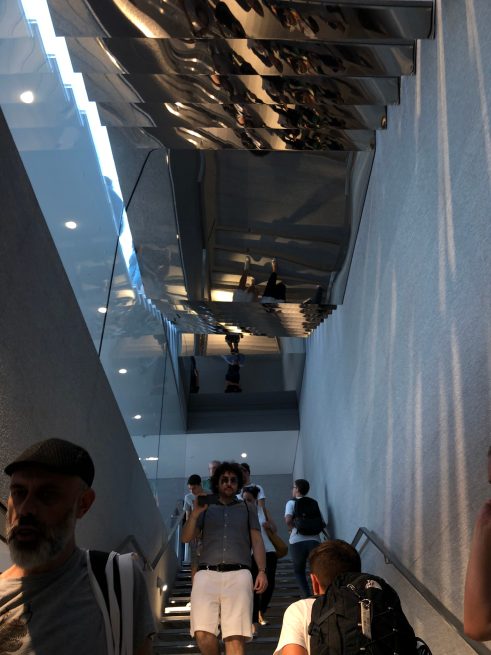 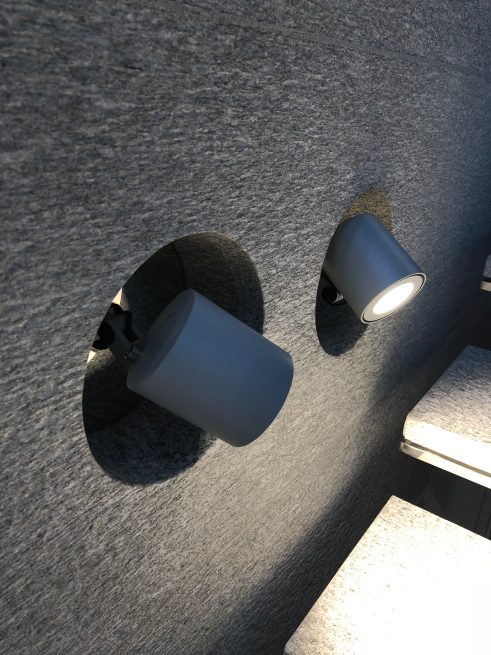 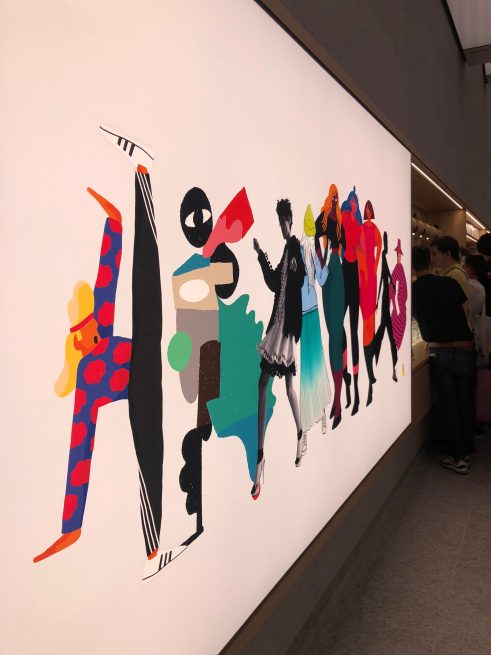 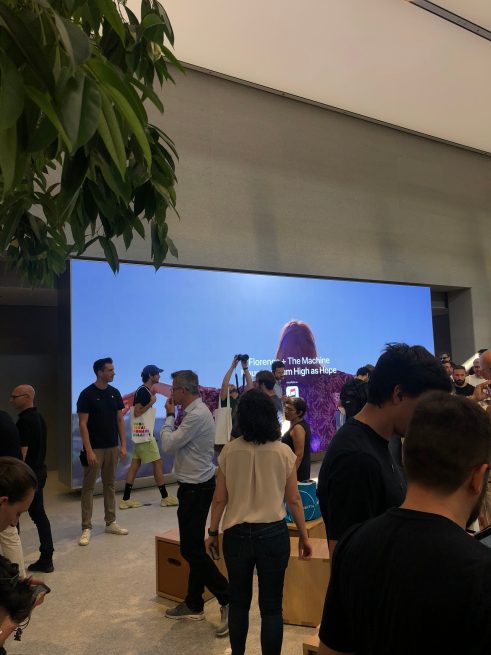 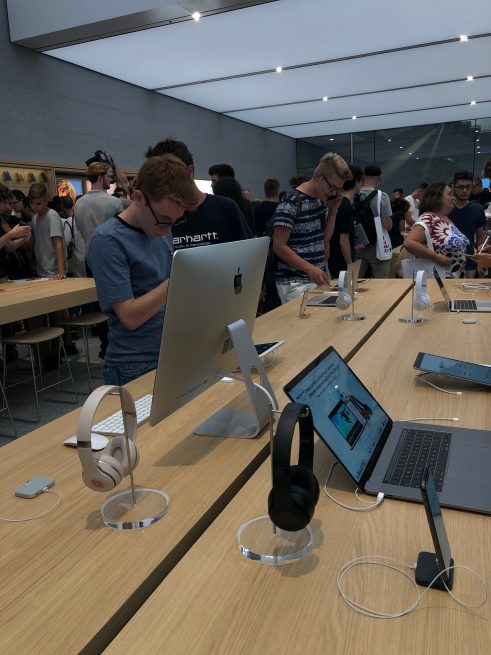 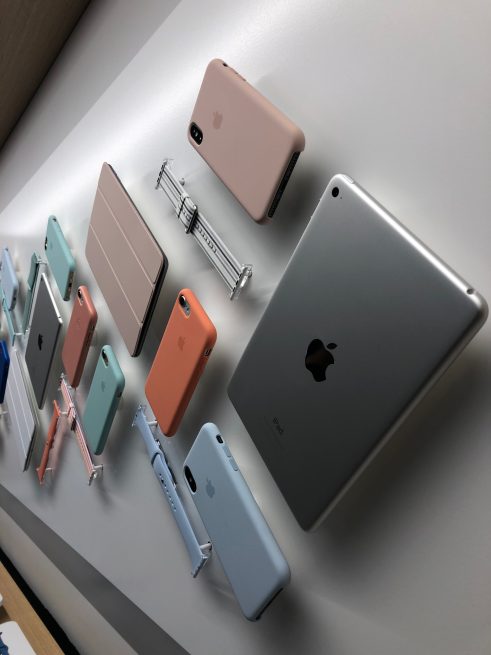 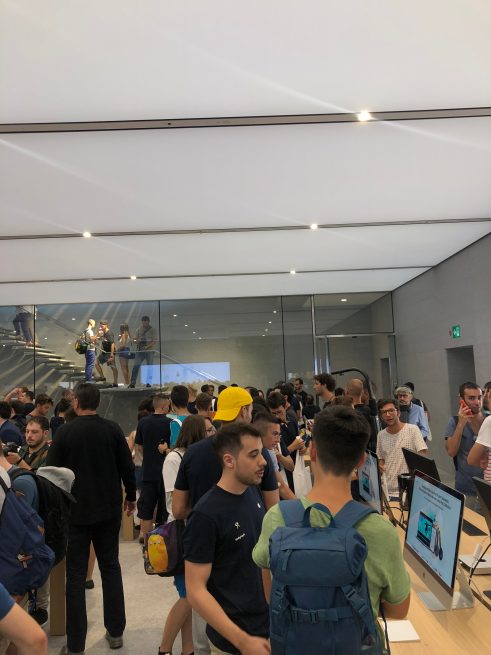 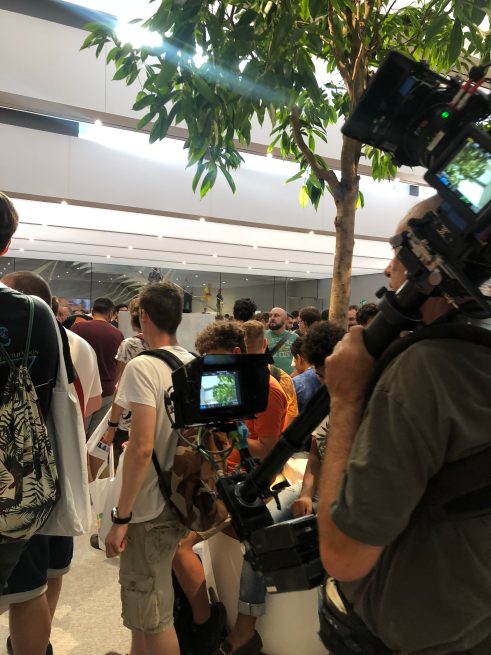 Completing Piazza Liberty’s construction in time for the grand opening was a race against the clock. Crews worked morning and night leading up to today making last minute adjustments to fountain jets and stonework. Apple retail’s busy week will wrap up this Saturday when Apple Broadway Plaza opens in Walnut Creek, CA. 9to5Mac will be on location to bring you premiere coverage.

Check out more photos and video from Piazza Liberty below, and follow along with our retail guide. 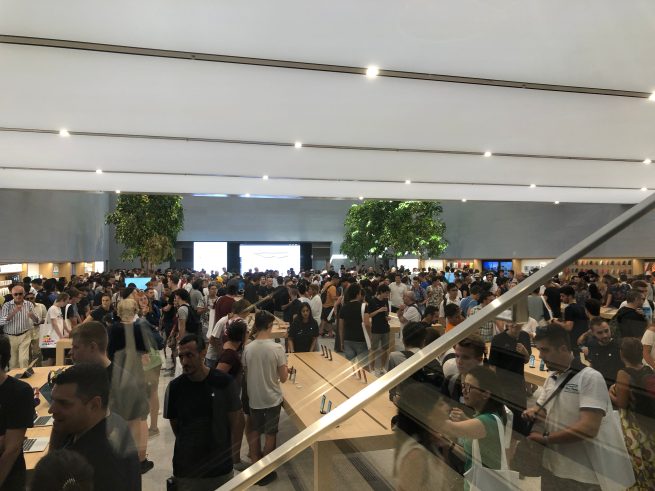 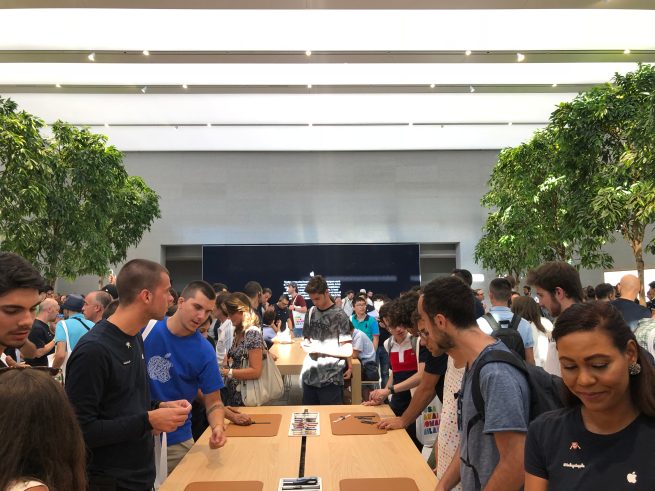 So here we go, #todayistheday for the #amazing #ApplePiazzaLiberty in #Milan! This is a little gift for the many #friends that will work in that #incredible store, an #artwork dedicated to the #Apple #PiazzaLiberty #team! I hope that many of you will visit them and learn tons of great things thanks to the #todayatapple program! 🥇 #HAVEFUN! #procreate, on #ipadpro with #applepencil. #globalflagship #applestore #tramway #piazzadelliberty #cartoon #fumetti #illustration #digitalillustration #procreateapp #ipadproart #milano #appleretail #todayatappleviaroma #todayatapplepiazzaliberty

What a night in Milan! Thank you to our talented team and the thousands of customers who celebrated with us at #ApplePiazzaLiberty. pic.twitter.com/sWh9Ti950e