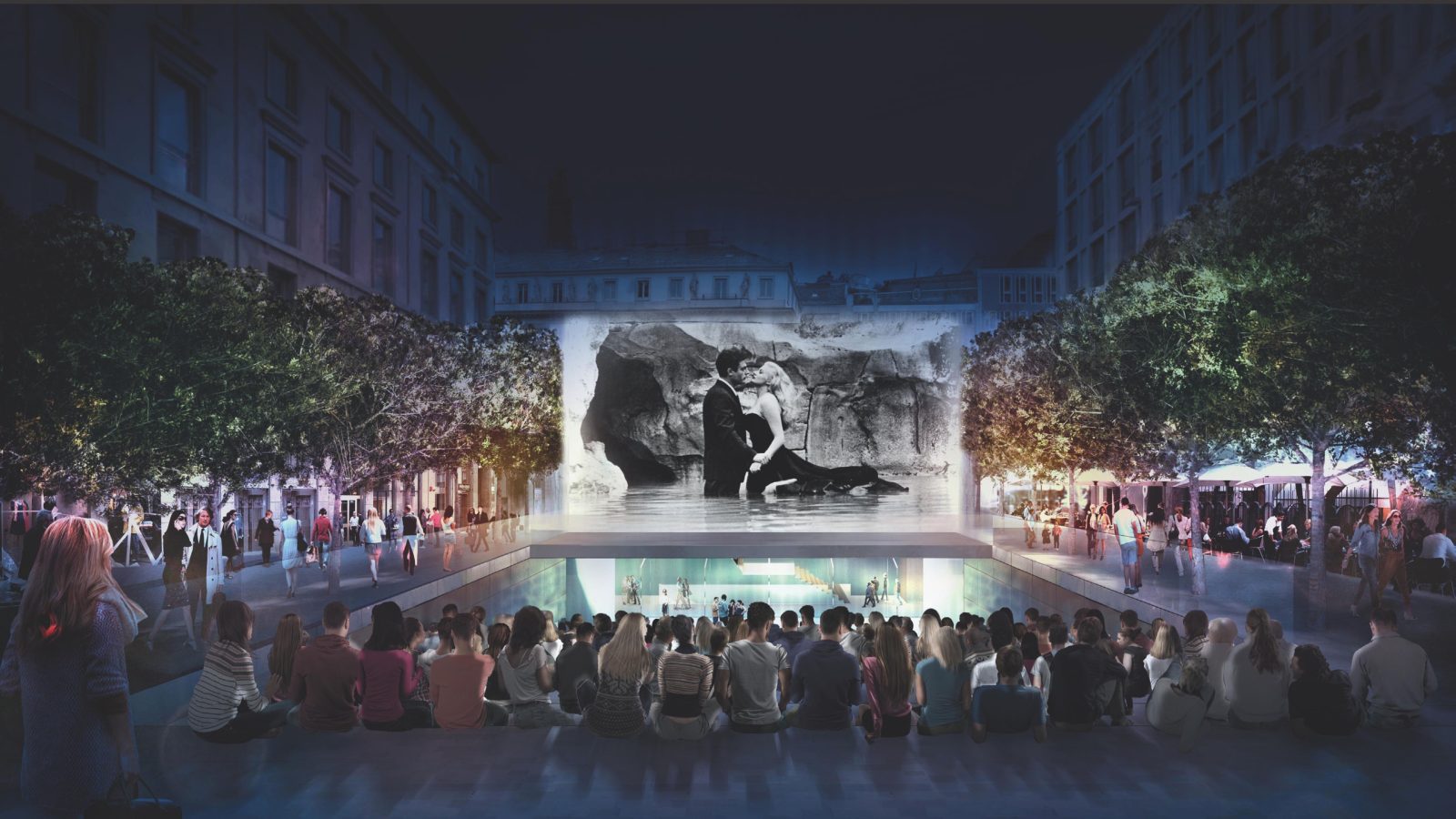 In the heart of Milan, Apple is making final preparations to open their 17th store in Italy. The new location will be the first in the country to fully embrace the idea of Apple stores as modern day town squares, an initiative rolled out in conjunction with the company’s new store design.

Apple Piazza Liberty, named after its location in a historic plaza bordered by other premium retailers, boasts a noteworthy compliment of architectural features differentiating it from any previous Apple store. The design begins with an expansive, outdoor amphitheater that steps downward from the plaza toward fountains that create a stunning wall of water. The waterfall, symbolizing Milan’s connection to canals, also serves as the store’s entrance. Visitors will descend through the fountain to the subterranean store floor below, where 230 employees are expected to work. The outdoor space will be used to host community events like summer movies and Today at Apple sessions. Apple wants the square to become a place where friends come to relax, chat, and discover new interests.

Today’s announcement comes via a new interview with Apple’s retail SVP Angela Ahrendts published by Io Donna, an Italian women’s magazine. According to Ahrendts, a grand opening will be held on July 26th. Like Apple Fifth Avenue in New York City, the interview implies the store will be open 24 hours a day. (Update: posted hours are 10:00 A.M. – 9:00 P.M.) A campaign featuring 21 local artists under the marquee “What Will You Do Tomorrow, Milan?” is expected to headline Piazza Liberty. The Milanese expansion has been highly anticipated by both Apple and the residents of the city since last spring when a teaser page for the store was posted on Apple’s retail website with renderings of the Foster + Partners-designed fountain and amphitheater. 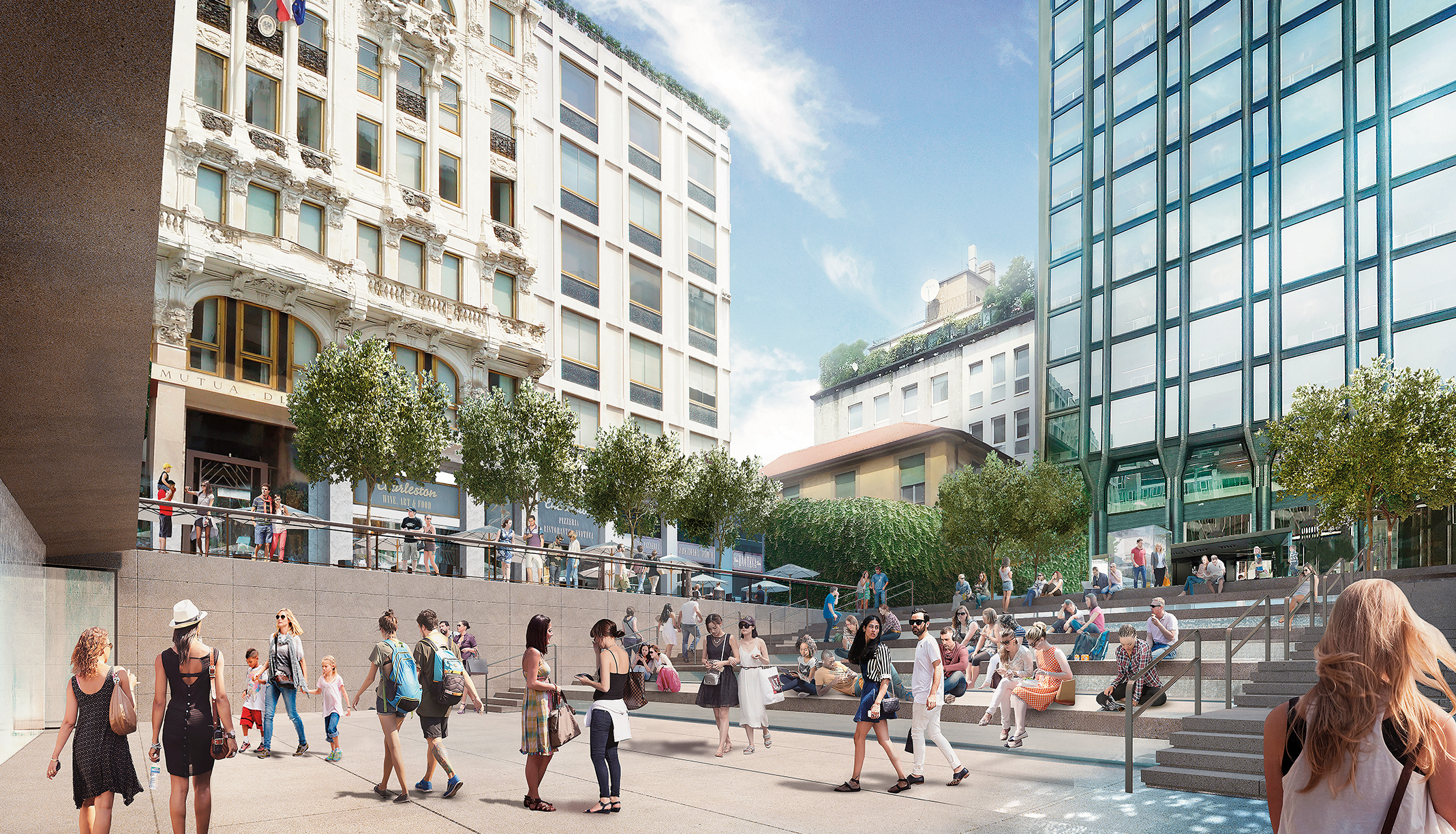 Both Piazza Liberty and the underground space that will house Apple’s sales floor are culturally signifiant to Milan. The plaza itself was named after the former historic Hotel del Corso, whose facade was moved to the north side of the square in 1955. Elsewhere around the plaza are buildings dating back as far as 1836. The head of the square is capped by the Torre Tirrenia, an 11-floor, modernist tower stretching upward in stark contrast to its quieter surroundings.

Underneath Piazza Liberty, Apple has renovated the former Apollo Cinema, which closed in January 2017 after operating in the same location since 1959. The region’s cinema history extends back at least as far as 1870, when the Milanese Theater opened nearby. Apple’s amphitheater will be an indirect successor to the original organization and carry on the cinema heritage established almost 150 years ago. 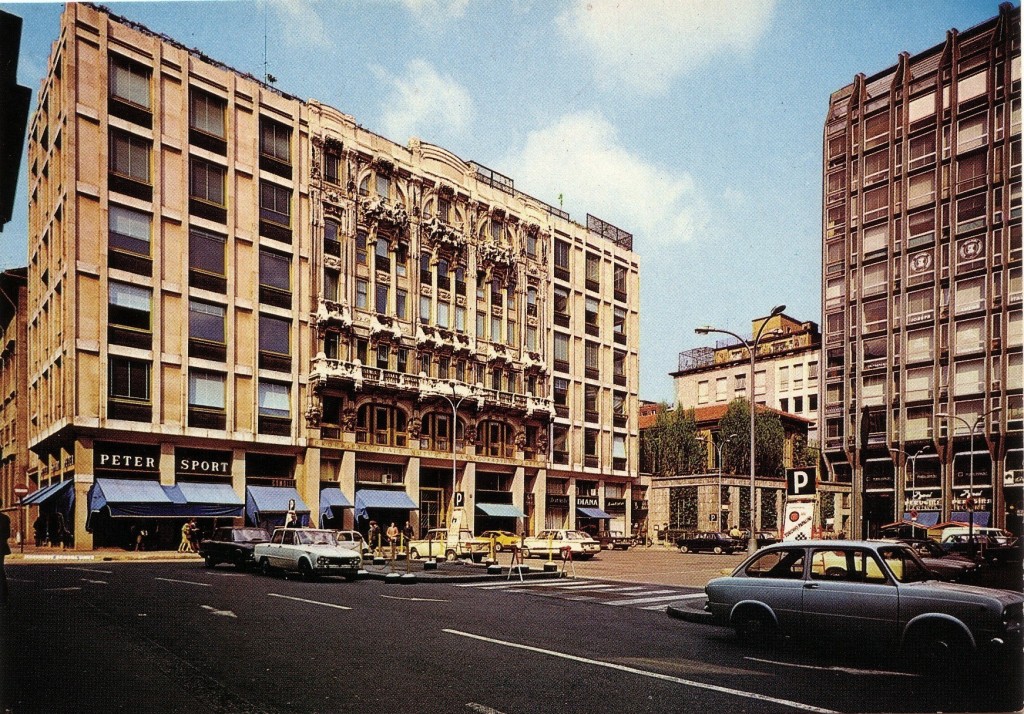 We first reported on Apple’s plans for a new store in Milan at the beginning of 2017, shortly after the company was given approval from the city to begin construction. Apple had been interested in a site near the Milan Cathedral for at least a decade.  Preparations began at the site last February, where time-lapse photography has been documenting the lengthy construction process. A large, temporary structure was built over the store’s amphitheater, allowing construction to continue under any weather conditions and away from prying eyes. In September, Apple’s retail leader Angela Ahrendts gave an update on the project during the first keynote held at Steve Jobs Theater.

Only a month later, reports surfaced that asbestos had been found in the former Apollo Cinema during construction, delaying progress and pushing the store’s opening back further into 2018. The first signs of completion at the site came this past January, when the roof of the temporary structure over the store was removed, revealing the fountain inside. In late March, photos showed the temporary structure over the store being dismantled, and most recently wraps were removed from the glass entryway for fountain tests.

During an interview at Cannes Lions 2018, Apple’s SVP of retail Angela Ahrendts gave a brief update on some of the company’s upcoming stores, noting that Piazza Liberty would open soon. The amphitheater design of the store was again highlighted as an ideal model for the future of Apple retail and a hotspot for award-winning Today at Apple sessions.

Apple Piazza Liberty will be the first new Apple store in Italy to open since Apple Firenze began welcoming customers in September 2015. The country’s first store opened in Rome ahead of the original iPhone’s launch in 2007. Elsewhere in Europe, Apple is preparing to open a five-story forum on the famous Avenue des Champs-Élysées in Paris. The company completed their first retail location in Austria this past February. In the United States, Apple’s planned location in Washington D.C.’s former Carnegie Library will embrace the idea of a town square indoors, preserving the historic building for future generations. The store is expected to open by late 2018.