Today at Apple worldwide: The first year in review 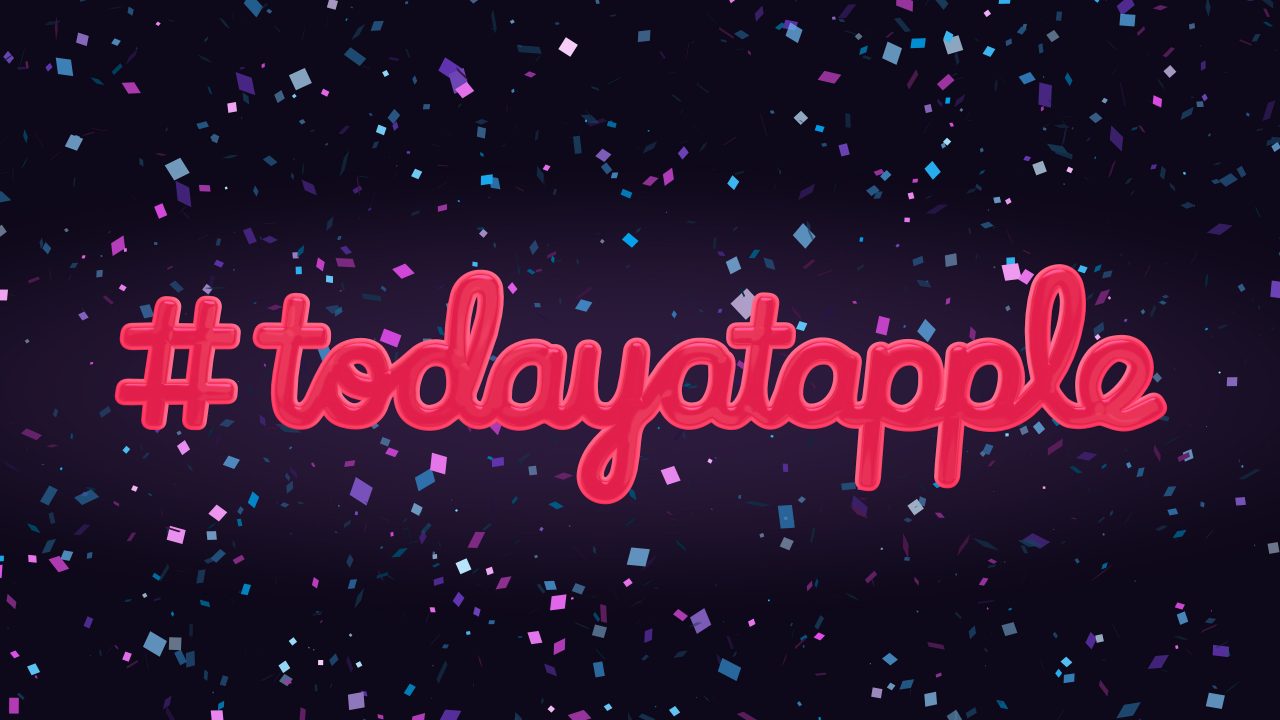 Twelve short months ago, Today at Apple sessions rolled out to Apple stores worldwide. Since then, thousands of free programs spanning a range of creative topics, from learning how to use Swift Playgrounds to taking a sketch walk in the community have been held daily. The sessions have become a key part of Apple’s recent retail philosophy which aims to reimagine Apple stores as modern-day town squares. With a full year in the books, it’s a fitting time to review the growth of Today at Apple, how well it has remained true to its goals, and what may be in store for year two.

Today at Apple’s public origins extend back to at least September 2015, when Apple opened a next-generation store in Brussels, Belgium. It was the first full store in the world to receive a Video Wall, Forum seating, and a Genius Grove, foreshadowing the design language that would eventually make its way to all new Apple stores.

In May 2016, on the 15th anniversary of the company’s first retail store, Apple previewed their new flagship location in San Francisco’s Union Square and announced the Today at Apple strategy. Apple explained that the initiative “brings to the community the world’s most talented artists, photographers, musicians, gamers, developers and entrepreneurs to inspire and educate our customers to go further with the things they are passionate about.”

Prior to Today at Apple, stores held a similar sounding series of sessions branded as “Workshops.” Unlike the new programs, Workshops placed more emphasis on technical training rather than community engagement and experiences. Today at Apple unified both Workshops and Youth Programs with consistent branding and introduced culturally rich special events and performances to the mix. To make the new format possible, Apple created a role called the “Creative Pro,” filled by experts deeply familiar with creative workflows and tools. The role was called the “liberal arts equivalent to the technical Genius.”

While select new stores began piloting the Today at Apple sessions shortly after the announcement, it wasn’t until April 2017 that Apple announced the program would be rolling out worldwide in May. At the time, Apple had a total of 495 retail locations, many of which needed a retrofit with new monitors called “Forum Displays” and a reconfigured seating area. An overnight refresh of older stores was done in preparation. In conjunction with the global announcement, Apple Dubai Mall opened on April 27th and began offering Today at Apple events immediately.

Was great to spend #EarthDay2018 @Apple Union Square with @OscarWasTaken on a photo walk learning how to better capture people in nature. #TodayatApple pic.twitter.com/4ZD7npihWF

On May 21, 2017, Apple celebrated the start of sessions around the world with a photo gallery of special events. Several high-profile musicians and illustrators were lined up to host live performances. A new website was launched to help locate and register for sessions at nearby stores. The initial set of programs spanned a range of 60 sessions, with each store offering a slightly different mix of signature programs depending on its size and market. Standard programs included:

Beginning in June, Apple expanded their Kids Hour offerings with new sessions involving filmmaking, illustration, and most notably iOS-controlled robots. Visit a store at any time of the day and you’re likely to see the Sphero robots cruising around on the floor.

Thanks so much to everyone who came to my Live Art session #TodayatApple! And thank you, @Apple for inviting me! Such a great experience! pic.twitter.com/AwnEr7sXmJ

Over the summer and into fall, Apple arranged an increasing number of special programs and collaborations in larger stores. Not only have these events been community favorites, they’ve been beneficial to artists hosting the sessions, too.

In June, K-Pop group NCT 127 performed at Apple Williamsburg in Brooklyn, New York to a screaming audience. Their song “Cherry Bomb” was later used in a Twitter ad for the Apple Watch. Artist Jenean Morrison hosted a live art session at the same store in September. I was later introduced to Jenean’s work when she was invited to discuss her creative process at an Apple event held in collaboration with Adobe at last fall’s MAX conference.

Other collaborations have included Star Wars themed events for “Force Friday II,” Sketch Walks with members of the Urban Sketchers community, and even a Music Lab with Wu-Tang Clan frontman RZA.

As Today at Apple grows, more and more new stores go further than simply accommodating a video wall, featuring layouts designed from the ground up around the Forum area. Since the program’s introduction, Apple has opened their first stores in Singapore, Taiwan, South Korea, and Austria. Both Japan and Australia have also received stores with the new design.

Perhaps one of the best examples of Today-at-Apple-first architecture can be seen at the new Apple Michigan Avenue along the Chicago River. The store has become a premiere destination for some of the best exclusive sessions.

A month-long series of programs called “The Chicago Series” were among the first to be held following its opening in October. Apple has also teamed up with architects Iker Gil and Perkins+Will to host special sketch walks through the city. Following Apple’s “Field Trip” education Keynote this past March, a unique Teacher Tuesday session was held at the store and attended by company executives. 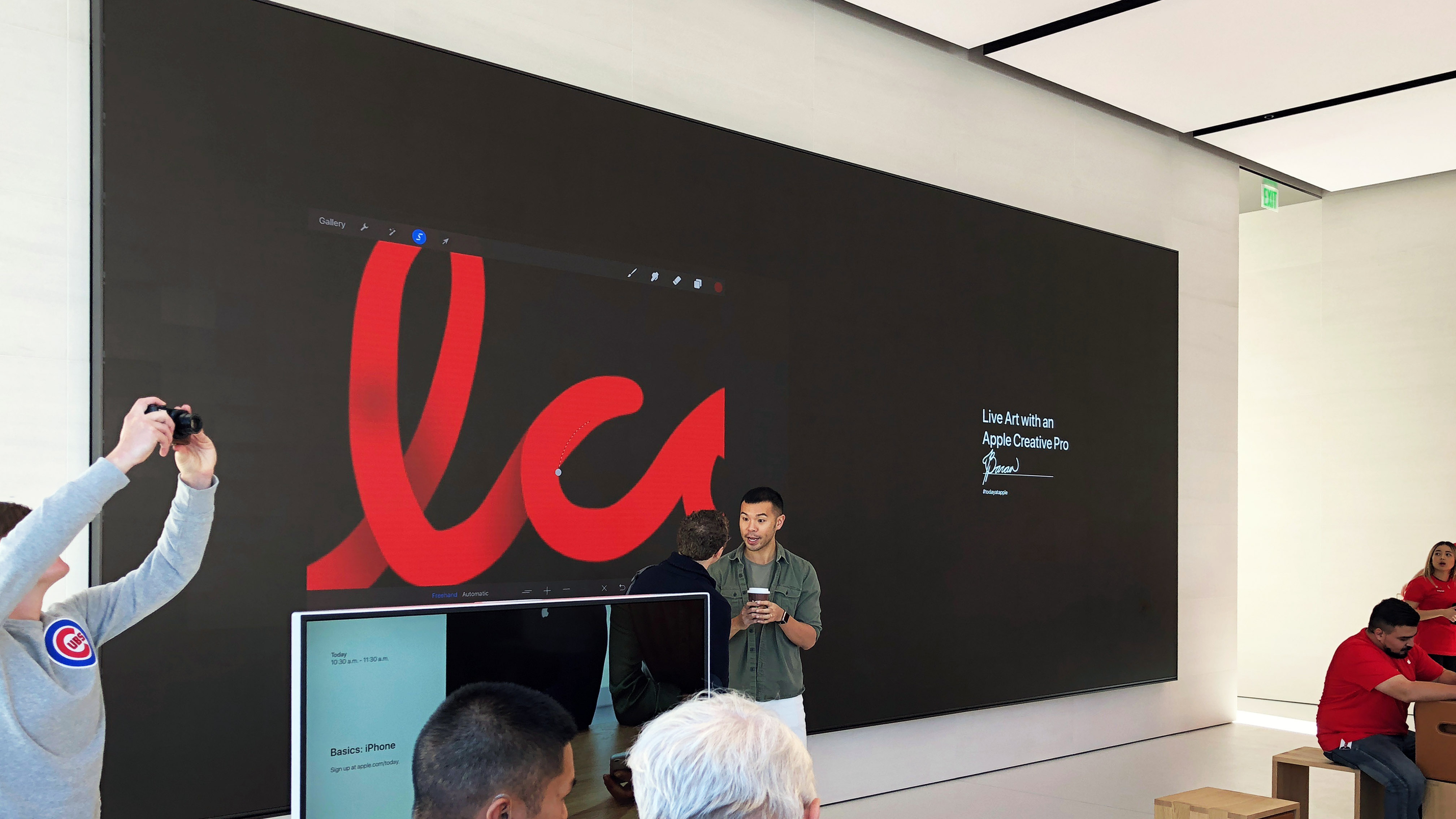 What lies ahead for year two of Today at Apple? With over 500 million visitors globally per year, Apple calls retail their “largest product.” Such a distinguished title indicates that much energy will be spent to continue its evolution.

In a letter posted on LinkedIn last December, Retail SVP Angela Ahrendts reflected on Today at Apple’s impact, saying “In doing all of this, we’ve realized we need a new set of measurements. How effective are the commitments we’re making in our experience, and our people? How do we raise our ‘human return on investment’?” In January, Apple began collecting feedback from session attendees. While we haven’t yet seen the fruits of this insight, the data will likely shape future initiatives.

One of the most effective ways Apple can expand Today at Apple’s reach is by making it available to more customers. In the retail space, that means opening and expanding more stores. At least four significant locations are expected to open throughout the remainder of 2018, every one designed to be a community gathering space.

Apple Piazza Liberty in Milan will greet visitors with a large, outdoor amphitheater. In Paris, the largest Forum in any store is being constructed on the historic Champs-Elysées. In the U.S., the famous 5th Avenue glass cube in New York City will reopen with a more welcoming plaza. Finally, Mount Vernon Square’s Carnegie Library is in the midst of being restored. When complete, Apple will share the building with the Historical Society of Washington D.C.

Great day in Madrid Coding the Droids. My children really enjoyed Today at Apple. Thanks to all Apple team @Apple @tim_cook pic.twitter.com/tzuFgAlYs1

Existing older stores will continue to be updated as well. While Apple’s portable Forum displays suffice for small sessions, they’re no substitute for the immersive experience of large Video Walls and open gathering areas in modern stores. The size of many older spaces, especially those in enclosed shopping malls, makes large events like concerts altogether impractical. Even with Apple’s relatively aggressive remodeling rollout, the process of converting every classic store will likely take several more years.

Beyond physical spaces, expect also to see upgrades to Today at Apple programs coinciding with new hardware and software releases. Yearly improvements to the iPhone’s camera continuously enable new and novel photography techniques. Apps and features like Swift Playgrounds and ARKit are opportunities to teach new skills. Last fall’s Hour Of Code sessions were a great example. Apple Pencil support on the new 9.7-inch iPad may also spike interest in more live art and illustration sessions. It’s likely that we’ll see more programs like the Dubai Typography Series, which are as culturally rich as they are informative. 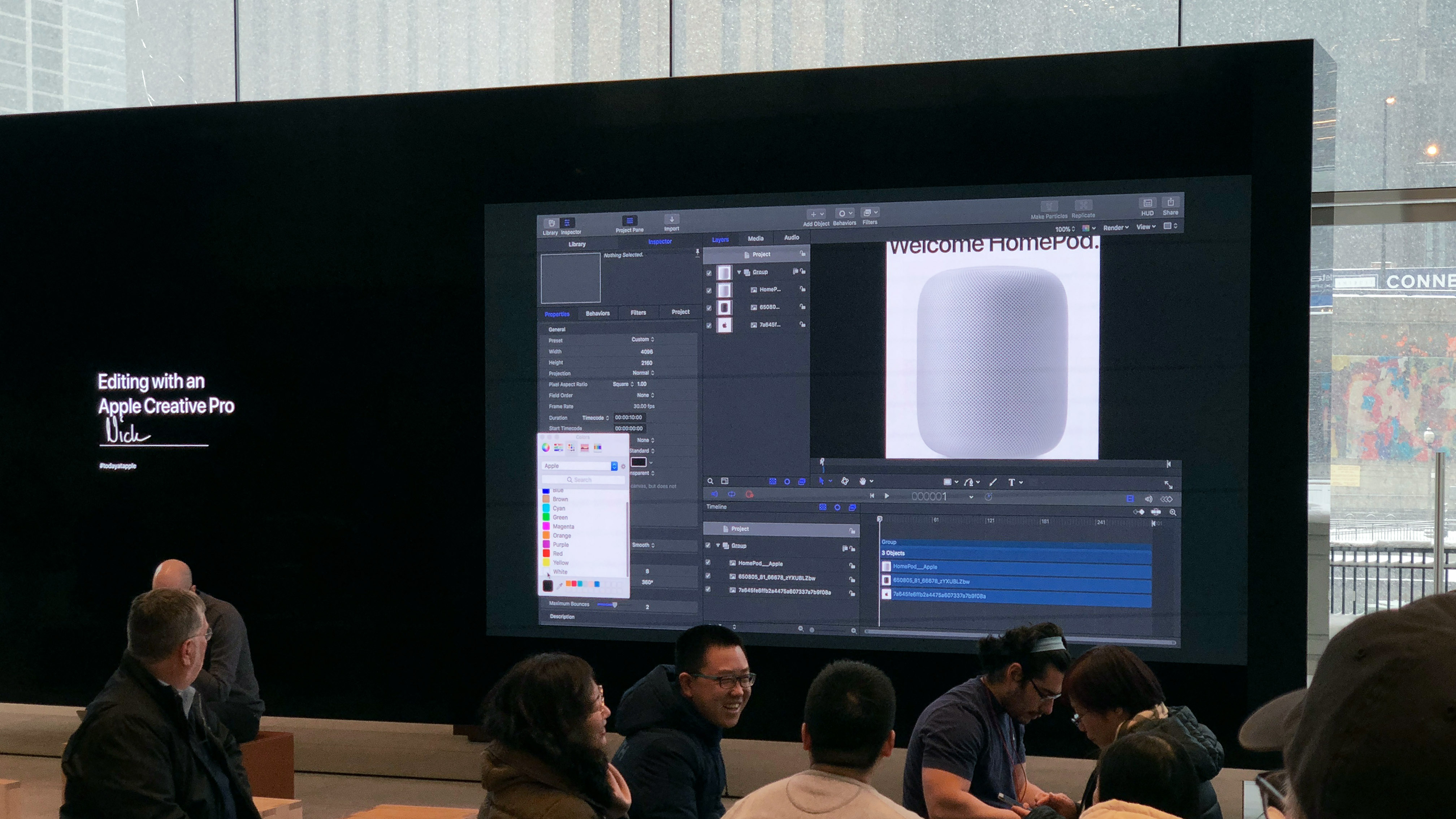 Apple could also choose to take advantage of their robust ecosystem by developing “session tracks” that combine skills to lead customers through a start-to-finish workflow. For example, a customer could sign up for a program comprised of three weekly sessions. The first focuses on capturing great photos with your iPhone. In the second session, iPads are used to create complementing illustrations. Finally, customers learn how to combine their photos and illustrations into compelling layouts on a Mac. Apple’s Pro Series follows a similar thread with programs of varying skill levels, but each session remains independent of the rest.

Above all, awareness is key to Today at Apple’s continued expansion. While Apple does a great job promoting its sessions on displays and the Video Wall inside stores, for customers who don’t visit stores often, the programs might be Apple’s best kept secret. The recently redesigned Apple Store app takes the first step in bringing more visibility to local events with a dedicated sessions tab.

On Facebook and Twitter, artists who hosts sessions will often promote their events ahead of time. Still, some customers who would benefit from Today at Apple sessions most are those that are new to Apple products and least likely to see the announcements. Increased local promotion and even personalized notifications could help spread the word. 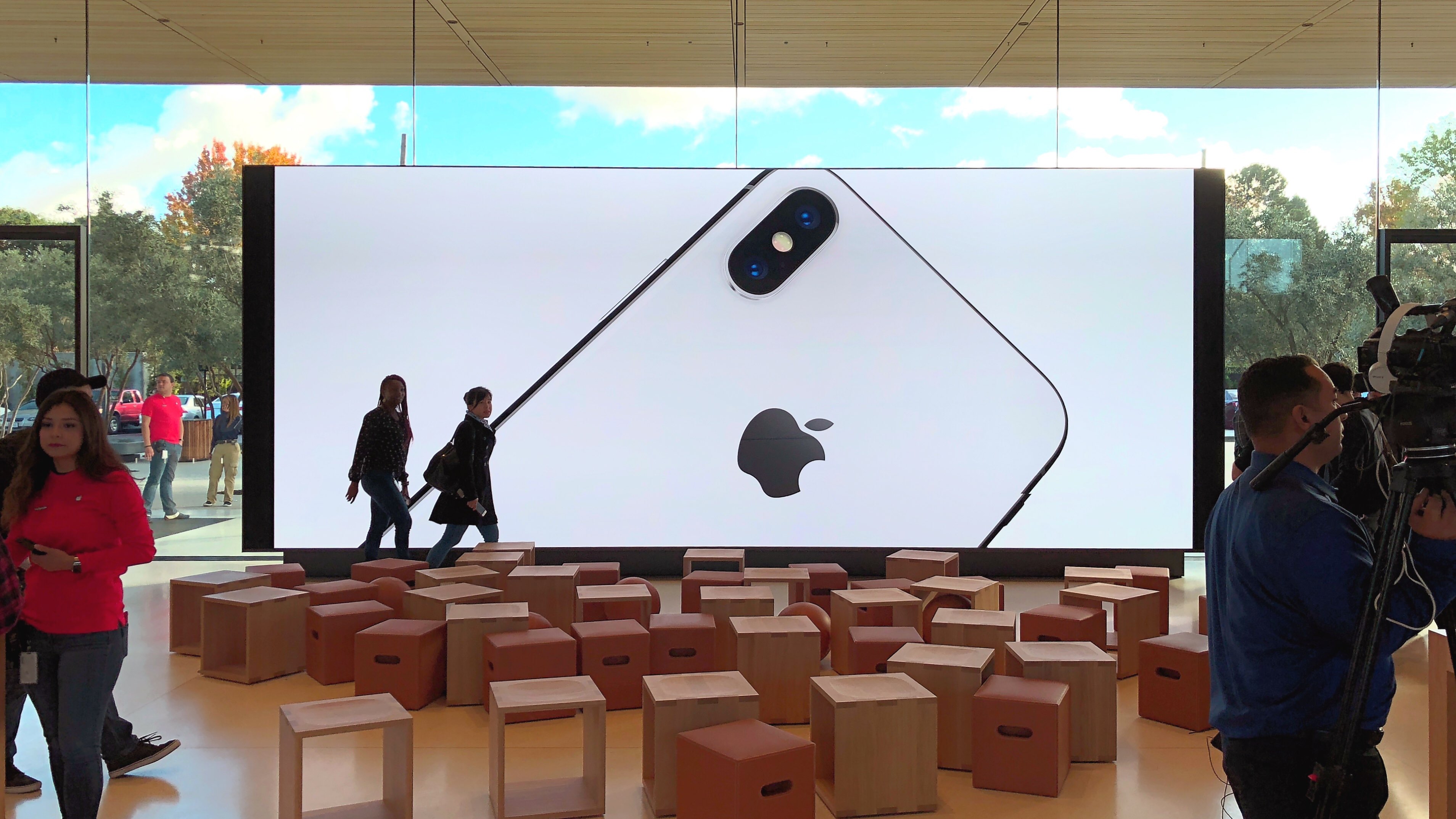 After twelve months of sessions around the world, it’s clear that Today at Apple has been as much of a learning experience for Apple as it has been for customers. When laying out the program’s vision, Angela Ahrendts said “I’ll know we’ve done a really great job if the next generation says ‘meet me at Apple.’” Heading into the second half of 2018, Apple has a long trail ahead in pursuit of their ultimate goal, but the journey has begun on solid ground.